Usually, February is a dreary month, one that lasts for about nineteen years. I often find myself counting the minutes during the doldrums of February. Not this year. The days are flying by. I’m having a really, really good time, largely because:

1) Paco has decided he loves the Billy Joel song “Piano Man.” While that song has always rated moderately high on my cheeseball scale, I am now playing it for the lad on the piano fairly frequently–and in the process, I’m realizing what a great song it is. Paco even had to sit down next to me the other day on the piano bench and sing along. What’s more, Byron showed Paco videos of Billy Joel singing it in the 1970s and then singing it more recently. Time has not been kind to Mr. Joel’s voice. Between listening to Joel’s gravely choke and watching the charming Adele belt away in her triumphant post-polyp removal return to the stage, I am left missing my father, the opera singer, tremendously. My formative years were filled with his admonitions to voices on the radio that if they didn’t learn to sing right, they’d get nodes on the their vocal chords and lose their voices all together. He passed away nine years ago this month, but Dad is still right. He may be dead, but he wins.

So, anyhow, I’m playing a lot of “Piano Man,” occasionally leading a sing-along, and just loving that the third grader can usually be found making his Beyblades battle while humming that hit from the ’70s under his breath. A few days ago, when a few folks were in the kitchen, engaged in chat, they had to stop for a moment and listen to what was going on at the piano. Paco, fresh off his third-ever piano lesson, was figuring out the first few measures of “Piano Man” for himself.

It’s become a household phenomenon, this song. Now Girl is playing it on her clarinet. However, Byron took her aside and firmly forbade any more of that nonsense, telling her the song is called “Piano Man,” so she, a girl on a clarinet, violates its essence and intent every time she plays it. She will be grounded and cut off from allowance if she ever attempts playing it again.

2) We had a house full of visitors this last weekend; my cousins stayed with us when the extended family converged to celebrate my aunt and uncle’s 50th wedding anniversary. On Sunday morning, the seventeen-year-old cousin who’d slept in the living room on the chaise longue came to her parents and Byron, bright-eyed and grinning. “You have to hear this!” she exclaimed. Turns out she’d been eavesdropping on Paco and his nine-year-old cousin, E, as they streamed some robot-based show off Netflix and engaged in the intersecting monologues that constitute boy talk, and this is what she overheard:

Paco: “I’ve already seen this episode since I’ve been watching this show for a long time, like, for ten thousand years.”

E-Cousin: “You weren’t even alive ten thousand years ago.”

3) Although Byron and I vowed to protest Valentine’s Day by going on love strike for the day, he did delight me when he left me a drawing on the kitchen counter. See, the day before, one of my Facebook friends in Turkey had posted a picture that enchanted me. Seems restorers of the Sehzadebasi Mosque in Istanbul were having some difficulties until they discovered a letter that Sinan the Architect had left buried in one of the walls explaining how he created the mosque. 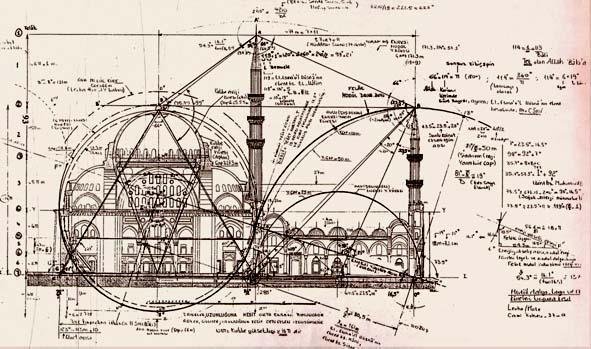 Immediately upon seeing the picture, I asserted that I want to find a copy of it, bigger, and print and frame it. However, there doesn’t seem to be a larger copy available online. Dang.

Byron assuaged my disappointment by leaving me this on the kitchen counter:

Turns out remodelers at the neighborhood hardware store coincidentally found design plans in the wall just behind pipe wrenches.

There you go. From “Piano Man” to hyperbole to lost architectural plans, I’m having a great February…although, admittedly, counting down the days until we can start some seeds out on the back porch and ready ourselves for gardening season.

In the interim, I’m going to work on mastering “We Didn’t Start the Fire” on piano. I might be able to cruise through March if Paco spends it singing

Brando, ‘The King and I’ and ‘The Catcher in the Rye’“

despite the lack of snow this is a very good February