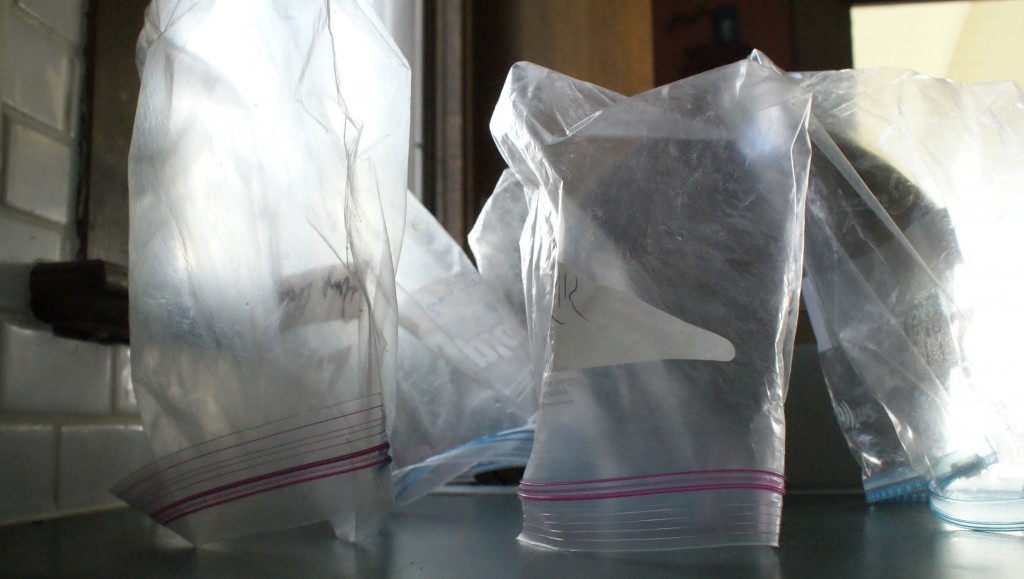 I had quite a tussle in the kitchen the other day, and Mario Batali wasn’t even trying to abscond with the dark chocolate.

(Good thing, too, for I am not above take-down by pony tail).

Rather, I was attempting to demonstrate my General Maturity by making dinner.

Planning began at 10 a.m., moved through a stop at the grocery store at noon, and transitioned into pre-meal preparation at 2 p.m., at which time I measured out and stirred up something called “steak spice” before dissolving it in balsamic vinegar. Dramatically, I hefted two pounds of pork loin and anointed it in

In the moment, it seemed practical that the recipe recommended plunging the meat into a plastic bag full of the marinade. The bag would be malleable, letting the juices work around the hunk of protein for several hours, permeating every pore of the pig. Throughout the afternoon, whenever I stopped by the kitchen, I would be able to squeeze and adjust the pounds of meat–much like my strategy for packing breastual tissues into a bra–and swirl the marinade around a bit.

There was just one itsy problem.

Once I poured the marinade over the meat and sealed the Ziploc bag, the thing became Mount Etna: several holes in the bottom of the bag created channels for the marinade to ooze out, bubbling over the counter top. Yelping a loud %&*@#!, I grabbed the sponge and a handful of paper towels before scrabbling into the drawer for a spoon: so much marinade had seeped out in thirty seconds that I was able to scoop it up and, illogically, dump it back into the holey bag. Gathering my wits–both of ’em–I changed the order of attack.

With my less-sticky hand, I pulled open the drawer where we keep plastic bags and riffled around for another big one. As quickly as possible, I transferred the loin and remaining marinade into the new bag. Cussing one more time at the holey bag, I threw it into the garbage and set about scooping and mopping the gunk off the counter, musing that the recipe hadn’t listed “sweat of your brow” on the ingredient list.

Daunted, I considered slurping the liquid off the counter but, instead of getting licky, bolstered my spirits with a personal affirmation: “It took the great Oscar Wilde an entire cast of characters to construct a comedy of errors, yet you have always manged to achieve states of nonsensery without a single assist!”

Finally, I deposited ten more paper towels into the trash and gave the sponge a thorough rinsing. There.

Now I could toss the loin into the fridge, ignore it for a few hours, and get down to grading some student work.

…or, as it turned out, I could spend another ten minutes wiping up marinade off the counter. Because holes. In the replacement bag. That invisibly damaged mo#^erfu@@er.

By the time I was done prepping the first stage of our “quick and easy dinner,” I was tired, sticky, and fed the hell up with plastic bags. Flippin’ stupid micro-punctured Ziplocs.

But then I sat down and started working through students’ paraphrasing activities, and because their work failed to hold my attention (Who assigns this stuff?), my brain took a meander down a path of memory, to the year we lived in Turkey.

After an evening of dinner and movies at a friend’s, we were putting on our shoes before walking back up the hill to our 400-year-old Greek house. As I zipped my jacket, our hostess came out of the kitchen waving a plastic bag we’d forgotten on the counter after unpacking our dessert offering.

“You don’t want to leave this behind; this thing is like gold. Not only is it a Ziploc, but I’ve never seen one this big before. It’s a treasure.”

The bag was a treasure. It had slipped into our sweaty clutches a few months earlier, when friends from the United States had come to visit during our year in Turkey. Before their departure, my friend Pamm–true to form in both generosity of heart and desire to shed random tangle of Stuff–had gone through her bag and sculpted a clump of unwanted items that she thought we might find useful. Among other things, there was a comb she’d picked up in a hotel somewhere between Istanbul and Cappadocia; multiple bottles of shampoo; a few note pads; a nail clipper; a specialized implement for starting the peeling of an orange; hotel slippers; a pair of Crocs. All of her discards were handed to us in an enormous Ziploc bag.

Like a preschooler who spends Christmas day playing with the cardboard box his new scooter came in, we were most excited about the packaging.

A ZIPLOC BAG? IN TURKEY?

It speaks to the fine character of our hostess that she didn’t let us leave it behind. A lesser woman would have shoved the thing into her silverware drawer while calling out a hasty, “Don’t trip on the uneven stones on your way out! Keep the kids close because, you know: feral village dogs!”

Gratefully, I took the big bag from her and hugged it to my chest. In a pinch, I could slip it over the head of an aggressive dog and zip it shut.

Fortunately, the return home was uneventful (only one near miss as a sixteen-year-old with Flock of Seagulls hair on a motorcycle came within half a foot of our second grader). Tenderly, we tucked Baggie in that evening, assuring it of our love, its value, and a long future together.

The next day, as I started to make cookies, I pulled Baggie out and set him on the counter. He was always more accepting of inserts if he knew their origins, so I let him witness the baking and ready himself for action during the cookie cool-down period.

Naturally, because this was Turkey, and because dumb situations crop up wherever I set my feet, shortly after I got the first pan of cookies into the little oven (essentially a toaster oven the size of a microwave), the power went out. Since the cookies only needed a few more minutes of baking, I decided to let the remnant heat in the oven finish them off.

As I waited in the dark, walking tentatively since the door frames in Cappadocian stone homes top out at five feet, I decided to call a friend and have a chat. After all, she was on her third Turkish husband, and if we missed a day of catching up, I feared the announcement of a fourth might slip by. Thus, when it was time to remove the pan of cookies from the oven, I was laughing, hunching, and stumbling (just another Thursday, really). Stabbing around in the darkness, holding the phone to one ear, feeling around for a dish towel to wrap around my free hand, I located the door of the oven and pulled out the baking sheet. Sweet Martha Stewart in menopause, but was hot!

I slammed it onto the marble counter top, grateful that the stone surface could handle heat.

What couldn’t handle heat was the enormous Ziploc bag I’d just set the pan onto, there in the darkness.

Immediately, huge holes melted into Baggie, rendering him unusable, fit only for the huge trash heap outside the village–where the feral dogs gathered before pack hunting my husband when he went out for a run. RIP, Baggie. Choke not a doggie.

Standing there blindly, unable to see the melted bag, I ran my fingers over the holes and felt a genuine sense of loss. That bag had come all the way from the United States before joining our family. That bag had once held a specialized implement for starting the peeling of an orange. It had gone to movie night. It had held bread, leftovers, cookies, and little crumbles of our hearts. A true treasure, admired by others, Baggie had come to us as a glamorous piece of “home,” one that made our year abroad feel the eensiest bit less foreign.

That Ziploc bag had been a great deal more than a Ziploc bag.

Although it could be argued that the world would be better off if plastic bags didn’t exist at all, that’s not the point. I realized, as I sat not grading paraphrases while recalling Adventures in Ziplocs, that the point was gratitude. If I was lucky enough to have something, and if I was happy to have that thing because it was useful, then I should forgive its failings and appreciate that it had tried to help.

My attitude thusly adjusted, I stood up, cracked my back, and walked into the kitchen. There, I stuck my head into the garbage can and yelled, “Thank you for your service, you holey bastards. You make me crazy, but what a privilege it’s been to have you.”

With that, I took a quiet moment to massage my loin.