My Balls Are Not Schweddy

I’ll bet some of you are familiar with this classic Saturday Night Live skit:

The earnest announcers speak with carefully modulated voices into their microphones, convinced that they are bringing a valuable educational experience to their listeners–and of course, hilarity grows out of their lack of external awareness. This is a downfall of the mercilessly earnest: they miss out on all the fun.

A year ago, thanks to a friend giving my name to the producer of a local public radio show, I was contacted and asked to head to the station and record one of my blog essays. When I got there, the whole place reeked of Schweddy Balls.

Rather, the whole place felt like the set for a Saturday Night Live skit, and I half expected Alec Baldwin to come in and set down a platter of his balls. However, the man who entered the studio was tall, engaging, used to work with Garrison Keillor on “Prairie Home Companion,” and was not at all Baldwin-like. There wasn’t a ball in sight.

A little part of me might still be disappointed about that.

After we chatted about lives, histories, and how to angle the microphone so as to keep all my strongest “p’s” from popping, Producer Chris headed into his studio and left me in mine. Speaking to each other through the mics, skulls encased in squishy headphones, looking at each other through the glass windows, we made a recording.

When I left that day, I was giddy. That had been damn fun.

Since then, Chris has asked me to return a few more times. The essays I record are aired during a Sunday afternoon music program during a segment called “Women’s Words,” which is aimed at featuring the writing of various Minnesota women authors.

Although I’ve promoted these recordings on Facebook and Twitter, I don’t think I’ve put links to them here.

There’s no reason for that. It’s just that sometimes I get distracted with trying to find a missing piece of Iznik tile for my Turkish harem jigsaw puzzle, and before you know it, the clock says 2 a.m., and yet another day has passed with me only managing to handle 150 student concerns, attend two meetings, advise one weeping twenty-year-old who just got evicted and has lice, sweat through a fear-inducing Total Condition step class at the gym, stop by the store to buy Greek yogurts and bananas, pet my children’s scalps, empty the trash bins, fold six loads of laundry, ask my husband about the tutoring he’s doing, crack a beer, and then do some puzzlin’. 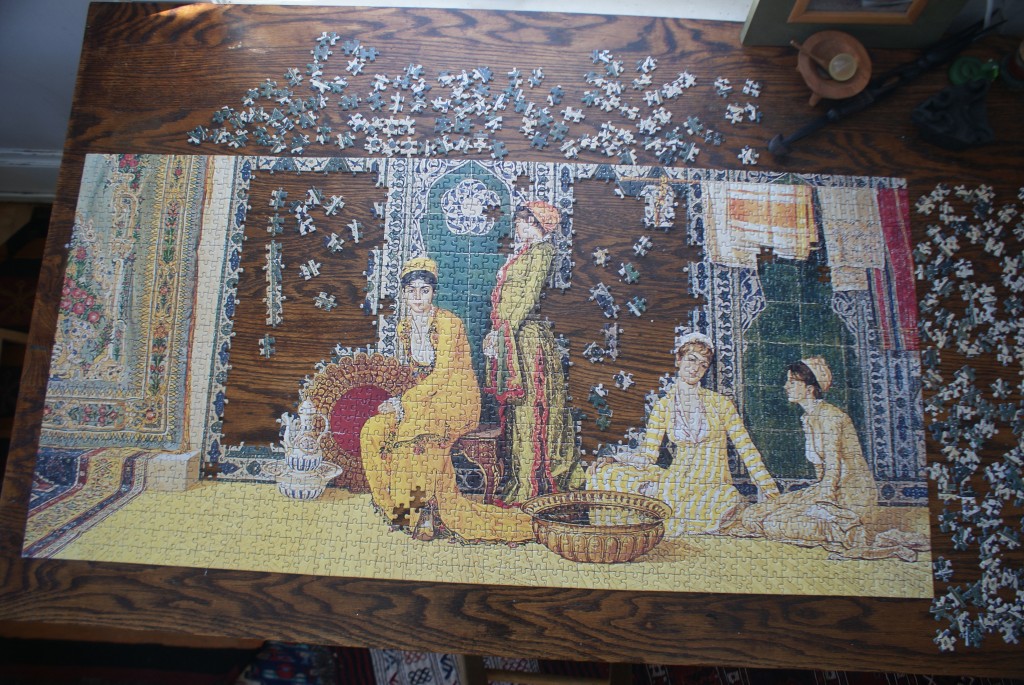 It would seem I could fold a bit of “post links to public radio recordings” in my off moments.

This is me, folding.

Thus, if you have any inclination to hear the voice of the person typing these words, please take a few minutes to click and listen. As you listen, know that an ongoing issue with my written nonsense versus the demands of a radio program is that I do–you may have noticed!–like to go on. And on. Before going into the studio, I spend hours trying to squeeze the word count down so that the final product will be under five minutes. Usually, I fail at that, and fortunately Producer Chris is kind enough to let me run long. On his end, he tries to mitigate my time violations by editing out every breath I take at the end of every sentence. I daresay my husband wishes he had access to a similar editor. Also as you listen, know that I am terribly happy when I get to read aloud.

The first time I went in, I recorded an essay about attending the Core Challenge class at the YMCA–and how strength is measured in a variety of ways: “Ab-solutely”

On my second visit, I recorded an essay about getting a haircut in Italy: “Bella Pippi”

After that, I recorded a two-parter, for one part wasn’t nearly enough time to record the trauma and fallout of getting a root canal:

On a very cold day in January, Women’s Words aired my essay about visiting the Greek ruins (in Turkey) called Efes: “One Hot Day”

The latest essay to air was the story of my pregnancy with my first child and one of my favorite pieces: “Fourteen Years Since the Blue Moon”

In addition to these, I’ve got a few more in the can so that my pal Producer Chris can pull them out whenever he needs a little something to plug into the show. In other words, you’ve been warned: one time I thought a Turkish guy was asking me to marry him, and now that idiocy has been recorded for posterity.

Now I’m contemplating the ways I’d explain the concept of “Schweddy Balls” to a Turkish guy, and all I know is that the ensuing charades would get me a whole lot more than a marriage proposal.

15 responses to “My Balls Are Not Schweddy”