My Teenage Diaries: The Gifts That Keep Giving

Of late, I’ve been mining my teenage diaries as source material for an essay I’m writing. The collateral joy from this process has been surprising.

Because, well, I was an idiot when I was a teenager. I was cruel and bitchy and loving and fun and wishing and wanting and sad and judgmental and snide. Already, I was painfully human.

Yet somehow, I’m ready to look that younger self straight in the face and reconnect with her. In the past, I’ve cracked my old diaries and thought, “Nope, can’t do it” after a few pages; other times, I’ve considered throwing them in a fire.

I’m so glad I didn’t. Those diaries, now that I’m 49, are important primary documents that link me to who I was, and I find I’m happy to re-meet her, embrace her, own her. Weirdly, this process completes something in me that didn’t know it was incomplete.

Perhaps it’s that I have a teenage daughter now, someone who is extraordinarily distanced from the kind of careening meanie I was. Perhaps it’s because I’m viewing the entries as source material. Perhaps it’s that I have curiosity about the voice in those pages. No matter what the reason, I have been deeply into digging through those jotted notes that remind me of who I was and give me a sense of how far I’ve come.

Along the way, I have become distracted from my purpose, as it relates to the essay I’m working on. Here and there, I’ve encountered sentences that make me snort, sentences that I have shared on Facebook, just so we can all have a chuckle at my expense. After doing that a couple of times, I realized I could compile them into a document and then, hitching my knickers up to my armpits, get brave and submit to a publication I profoundly admire: McSweeney’s.

The editor at McSweeney’s got how some silly snippets remind us all of our younger selves. They accepted the list of excerpts from diary entries I wrote when I was 15, and I am seriously so excited that I need a Baby Wipe. If you are interested in seeing it, please click here: “Notable Reviews from my 1982 Diary.”

As long as I have you here, though, I want to make it reallllly worth your while. To that end, I’ve copied an anecdote out of my diary from 1984, when I went on the AFS program to Denmark, where I lived for three months with a single mother in her mid-thirties (Lillian) and her three young sons (twins Povl and Peder were 5, and older brother Karsten was 6).

Accompany me now to an afternoon in 1984 when I attended a Danish festivity called “Ringriding.” 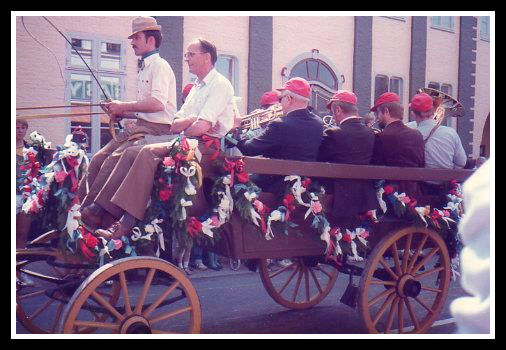 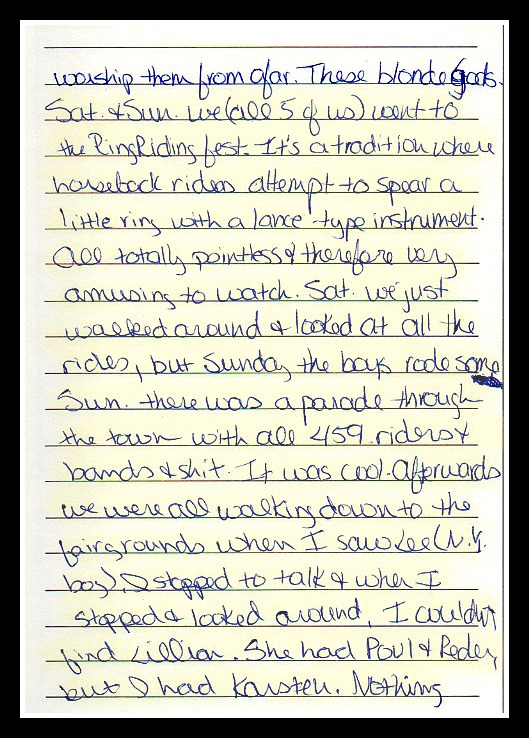 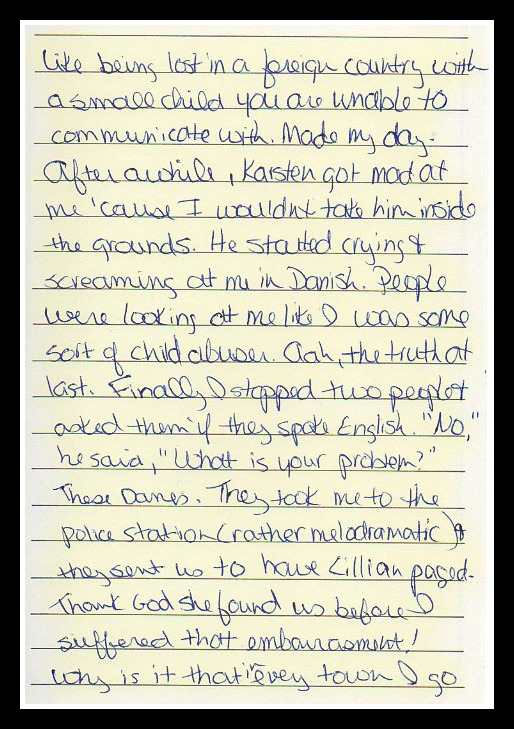 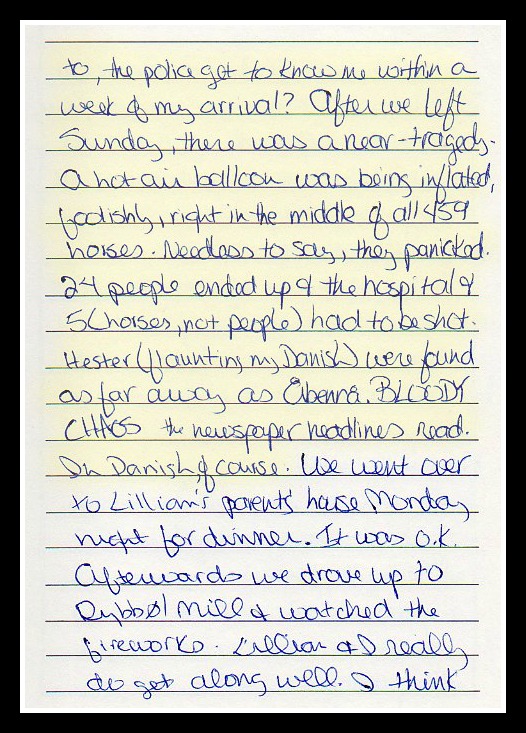 Saturday and Sunday we (all five of us) went to the RingRiding fest. It’s a tradition where horseback riders attempt to spear a little ring with a lance-type instrument. All totally pointless and therefore very amusing to watch. Saturday we just walked around and looked at all the rides, but Sunday the boys rode some. Sunday there was a parade through the town with all 459 riders and bands and shit. It was cool.

Afterwards we were all walking down to the fairgrounds when I saw Lee (N.Y. boy). I stopped to talk and when I stopped and looked around, I couldn’t find Lillian. She had Povl and Peder, but I had Karsten. Nothing like being in a foreign country with a small child you are unable to communicate with. Made my day.

After awhile, Karsten got mad ’cause I wouldn’t take him inside the grounds. He started crying and screaming at me in Danish. People were looking at me like I was some sort of child abuser. Aah, the truth at last. Finally, I stopped two people and asked them if they spoke English. “No,” he said, “What is your problem?”These Danes. They took me to the police station (rather melodramatic) and they sent us to have Lillian paged. Thank God she found us before I suffered that embarrassment!

Why is it that in every town I go to, the police get to know me within a week of my arrival?

After we left Sunday, there was a near-tragedy. A hot air balloon was being inflated, foolishly, right in the middle of all 459 horses. Needless to say, they panicked. 24 people ended up at the hospital and 5 (horses, not people) had to be shot. Hester (flaunting my Danish) were found as far away as Aabenraa. BLOODY CHAOS the newspaper headlines read.

In Danish, of course.

3 responses to “My Teenage Diaries: The Gifts That Keep Giving”