Of Tesbih and Testes: First Layer of Disgruntleds

So, about those Turkish men.

We first entered the village of Ortahisar on foot in August of 2010, having dripped down a meltingly-soft asphalt road for nearly two kilometers from the main highway. Unable to find a rental in heavily-touristed Göreme, we felt the quiet backwater of Ortahisar held promise. After all, our friend Christina had a friend in Ortahisar, a young buck named Cemal who was attempting to shape a real estate empire for himself from the saddle of his ATV. Christina knew Cemal from her bartending days when he’d worked at the same bar as a bouncer. In 2010, though, Cemal was distinguishing himself as Ortahisar’s up-and-comer, whizzing up and down the main street of the village on four wheels, moving from his newly-built hotel to overseeing workers at a restoration site to stopping by the grocery store to buy the requisite six loaves of bread per day that all Turks use as mealtime filler. While, intellectually, Cemal was a few peppers short of a full kebab, he more than made up for it with focused ambition and an ability to motor up the village’s hills while locked into a standing position. Luckily for us, part of Cemal’s real estate dabbling was a desire to call himself “agent.” Thus, on that steamy day in August, we were heading to meet Cemal and take a gander at a couple of rental houses that he’d lined up.

My first impression of the village was so strong as to be visceral, so profound that it sticks with me still, so counter to my accustomed vision of a public space that my brain reeled. Feeling strangely queasy, on display, and defensive, I took in the village’s main square and street. Both were full of people—mellow, relaxed, playing tavla (backgammon) and Okey (Rummicube), chatting, hugging, smoking, strolling. The tea garden at the center of town was packed. Clearly, Ortahisar didn’t lack for sociability.

The rub, of course, was that every last person I saw was male.

To my left, to my right, over my shoulder, down the avenue, on the bench, coming out of the shops, driving by on scooters, meandering around with tesbih (prayer beads) behind their backs, everywhere were 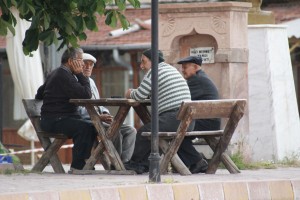 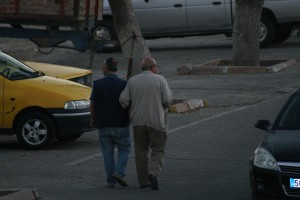 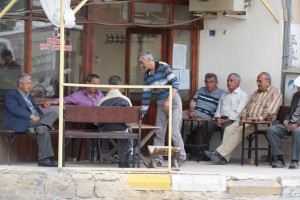 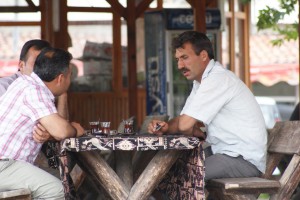 Certainly, I was there, too, which qualified as an estrogen shout-out. So was Christina. That made two. If we added in 10-year-old Girl, we almost had a quorum. And eventually we became aware of a female tourist over near the tea garden. We tracked her presence by following the trajectory of Male Gazes, all of which—whether discharged by a 20-year-old or a 70-year-old—lasered through wood and glass and air to burn into this young woman. In a short skirt. Wearing cowboy boots. Positioning herself to straddle a motorcycle behind a young man. As she elevated her leg across the bike’s seat, a table of riveted elderly men unconsciously began to beat the palms of their hands onto their table top, tapping out a tattoo of thrumming testosterone.

The thing about the nubile tourist on a ‘cycle is that she drove away. As it turned out, Cemal delivered on a viable rental (a 400-year-old Greek stone house),

What I have discovered in the months since last August is that the dominant presence of men is constant. At 4 a.m., at 8 a.m., at noon, at late afternoon, at dinner time, just before we tuck the kids in, several hours later at midnight—no matter the hour, the primary public spaces of Ortahisar are dotted with men sitting next to men who are hemmed in by other men who are flanked by some men who are bookended by a cadre of men. 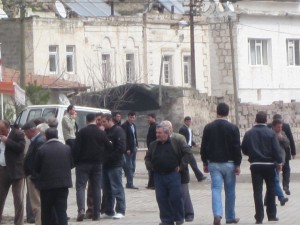 It’s not that there are shifts of these men, either. They don’t put in eight good hours of sitting and then head home. Nae. Rather, the same faces can be seen all day long, every day, whether it’s midnight or 8 a.m. Each guy has his routine, his posse, his particular store front or wooden stool to monopolize, and he is diligent, loyal, and true. No game of Okey is left unplayed, no glass of tea unsipped, on his watch.

For me, such predictability has proven a challenge. The challenge comes mostly from an ache for what I’m not seeing in the square. Women. If the men are all lazing around with their buddies all day every day, where does that leave the women?

The answer to this question is obvious. They’re at home. They’re carrying out all the duties of life that aren’t playing board games and drinking tea. They’re shouldering the work associated with children, food, house, and wifedom. Their public absence creates in me sadness and compassion. 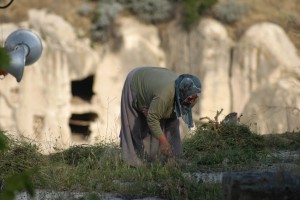 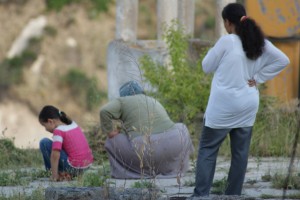 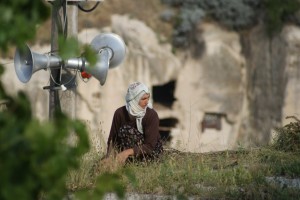 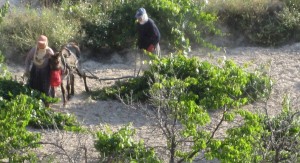 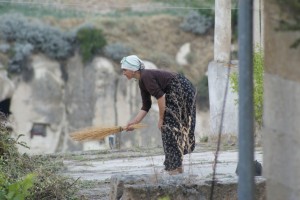 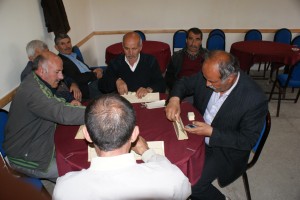 On some level, I just can’t get my head around this sensation of alienation and self-consciousness because my reaction plus the reality of the men doesn’t add up. For here’s the thing: the males who wallpaper the town square aren’t lecherous, really. Sure, they stare. It’s what they do. They need something to look at. But they don’t cause me to feel worried about my safety or as though I’m rare sport come to amuse them. On the contrary, they are immensely respectful and welcoming and dear. They have treated me as kindly as I have allowed.

A big part of my reaction stems from my own hang-ups (thank you, Formative Years!). On occasion, I’ve tried to untangle my own internal damage from the benignly observant mien of the village men. Yet even if I weren’t physically on the streets, wading through the guys, even if I were watching them remotely, as beamed from a video camera, I’d still find it off putting. The larger issue isn’t about the overweight girl wishing for a boyfriend who still bunks inside my heart; it’s about a values system—mine–that struggles with the concept of “separate and unequal.” 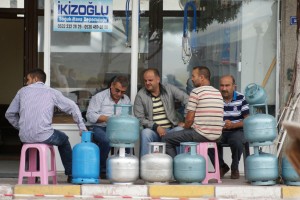 Admittedly, I chose to live here. I let that darn Cemal and his desire to find the foreigners a good house turn my head. I let the landscape and the hospitality and the jaw-dropping history and the decency of the people convince me that this could feel like home. In small ways, it has. In big ways, it hasn’t. And that’s okay. A certain amount of discomfiture is part of the bargain.

What has surprised, however, is how unable I’ve been to adjust to the deeply-socialized patterns of gender in these traditional areas of Turkey (by no means everywhere; the west coast is distinctly different). Usually, I can look at something, size it up, analyze it pragmatically, and accept it for what it is. This thing, though, this business of the sitting-around men and the women relegated to spaces of home, its nearby environs, market, garden plot, and a small walled-off section of the mosque, well, it erodes my sense of comfort. Put another way: it makes me cursewordingchickpeacrazy.

On one hand, the problem is mine. I’ve looked at the culture and decided I can’t adapt. I’ve done a gut-check and decided I’m willing to see but not to accept. This place has brought out my ornery, which means I was in no small measure delighted last week when our visiting friend Kirsten first walked the main street and noted, “Okay, this is weird. It’s like I just stepped into an episode of The Twilight Zone in which all the women disappear. Yea, weird. I keep thinking that if a situation came up, we’d be outnumbered.”

On the other hand, and this is where my temper gains steam, the problem is theirs. Yes, the women have a responsibility to step up, if their lot ails them. But even more, it behooves those in the seat of lolling-about power to do the right thing. It behooves them to develop a sense of guilt, hoist themselves up off their well-padded behinds, stroll home, and call out, “Hey, Fatma? The sunset tonight is gorgeous. You wanna take a breather and go out for a walk to enjoy it? I’ll watch the kids. Relax: I know how to stir the lentils every ten minutes. What do you think I am, a lousy, selfish, no-show, self-absorbed, emotionally-arrested infant who nevertheless acts like he owns the planet? Ha! Now slap on your slides, fluff up your shalvars, and go have some fun. I brought home a nice little box of your favorite baklava, too, so how’s that for something to look forward to before bed? Now git!”

Thus it is that, whenever Cemal zips past on his Big-Boy Bike, so honestly a man on the move, I silently send him wishes for his ultimate success. That’s right, Cemal. Keep at it. Stand up in the seat. That way, your vision will only graze the heads of your “peers” as they recline in front of their 15th cup of tea of the day. With the added elevation, perhaps you’ll spy a new horizon.

17 responses to “Of Tesbih and Testes: First Layer of Disgruntleds”