One and Forever: Thursday, February 22

It matters to this story that dusk is creeping around the edges, and thick, quiet snow is falling slowly, slowly from the sky, accumulating into a desert of white dunes outside the large picture window behind my back.

She’s talking, my great pal Virginia is, as she lies on the couch to my left, her feet elevated to help the fluids drain from her leg that swells each day from edema caused by the tumor that has inhabited in her pelvis for twenty years. Every day, to get through the day, her slight body is mobbed, swabbed, bundled, padded, and hooked — with nephrostomy tubes and bags, an under-skin pain pump the size of a hockey puck, gauze, tape, hooks, back-up systems. She is swaddled by the accoutrements of unbudgeable cancer, living graciously and gratefully in constant pain.

Despite the lashings of medical equipment that snake beneath her clothes, Virginia’s brain roams wide and free. I’m taking trips with her brain now, as she talks over there on the couch, because we are catching stories for her next book, trying to capture them before she has a colostomy in a couple weeks, the next procedure aimed at improving quality of life. Writing is difficult business when sitting is often impossible, but if she can lie with her legs up, she can talk, and I can type.

So far, she’s told me seven-and-a-half stories — five of them about a neighbor boy she fostered, one about injustice on the playground, another about a woman on a park bench in Germany,. By way of a breather, we’ve let ourselves get derailed from a story about the day she met her future in-laws after I’ve asked some follow-up questions. 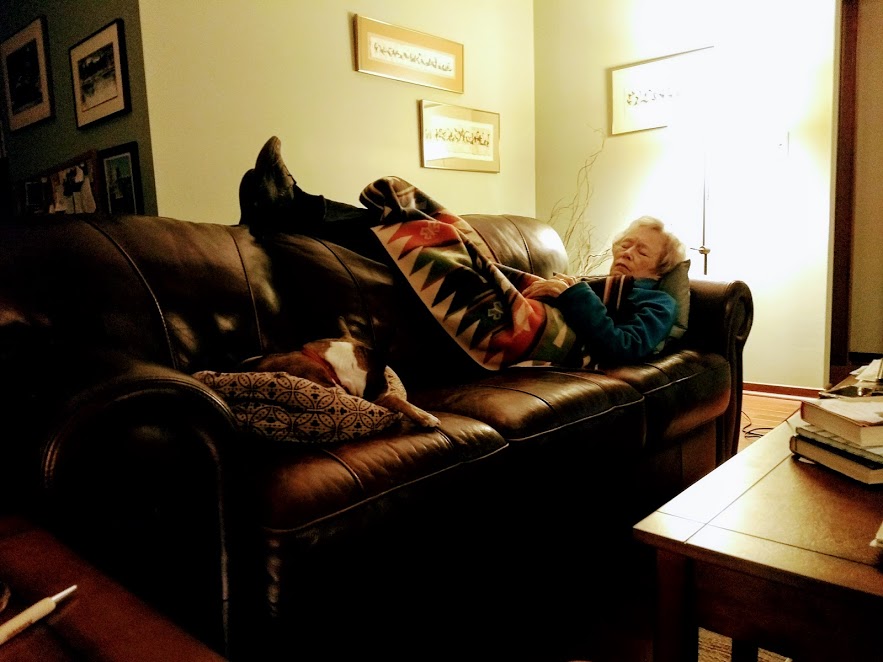 Now we’re talking about Richard, the youngest of her four brothers, the one I sometimes forget about because he was gone before I met her.

She was a senior in high school when he was born, but despite — maybe because of — that age difference, they felt a genuine connection. He loved writing, wanted to get into film, got a job with a kind of documentary company that at some point did a commercial involving a wallaby and luggage. Virginia remembers being so envious that Richard got to be on set with a wallaby, and she didn’t.

Not too long after Virginia returned home from a trip to Europe, her brother Dan called her to tell her that Richard, then 26, had been driving to Jackson Hole from Minnesota with a friend, for a vacation. Near Billings, in central Montana, Richard fell asleep at the wheel, and then awakening with a jolt, he over-corrected, and the car flipped and rolled into a ditch. With no seat belt on, he was thrown from the car and died within three minutes. His friend lived.

Later, after the immediate worst of it, after an undertaker named Mr. Graves readied Richard for permanent rest, Virginia awoke in the night, her heart racing. Panicked by the atrial fibrillation, she went to the emergency room, clutching her chest, and told the doctor, “It feels like my heart is broken.”

After Richard’s death, as his mother and siblings sifted through his belongings, Virginia claimed some treasures to keep her brother close: a pottery serving bowl which she had gifted to him, reclaimed now; a pair of his wool socks, eventually worn to nubs; a blue-and-green plaid flannel shirt, also worn to threads, and his belt, which became her default belt, her go-to, the only one she has worn now, as her own life winds down, these past two years.

Thirty-seven years have passed since Richard died, and his belt is with her as she dies by millimeters.

And so it matters to this story that darkness filters through the glass, soft snow sifts to blanket the ice-locked ground.