It’s going to be a summer of pictorials over here, I fear. Suffice it to say, my head is full of children–often perky, often listless, too often full of the words “What should I do?” now that school’s out. Interestingly, and I remember this from my own youth, they want something to do, but they don’t actually want to do anything. In a stand-out highlight, I managed, last week, to get Paco interested in helping me catalog items that we’ll be donating to Goodwill. He wrote them down and noted their condition (for tax purposes), and I packed them up, readying them for the drop-off.

That was a really great ten minutes we had there.

Outside of that, it’s been a whole lot of other chunks of ten minutes, during which I say things like, “Why don’t you make some slime? We have a kit.”

“Why don’t you take your scooter out and whip around the sidewalk for a bit?”

“Why don’t we pull out the hot glue gun and glue stuff together?”

“Why don’t you take this shovel and dig me some holes in the dirt?”

“Why don’t you pull out one of our two hundred board games and sink somebody’s battle ship?”

At least I can give him credit for good manners.

This whole shift from school year into summer and the feelings of “I want something, but I don’t know what” reminds me of being a kid and standing in front of our open refrigerator, staring at the shelves of food, and saying to my mom, “I’m hungry. There’s nothing to eat.”

The Girl is easier, as she heads off to her room to recline on her bed and stare at her wall.

When I pop my head in to say, “Are you seriously staring at the wall? Why don’t you pick up that book next to you?”, she responds, “Naw. I’m good.”

See how manners suffer in the preteen? Not a “thank you” in sight.

Fortunately, she’s got a pretty stiff soccer schedule going on, and she’s doing band camp this week (oh, my, but there were nerves before the audition), and we’ve got her doing a program called The Incredible Exchange (adolescents volunteer at organizations around town and receive a certificate at the end of the summer for a ski pass or art classes or theater tickets). She’ll be volunteering at the children’s museum for the next month or so, doing stints at the Dino Dig display and teaching kids to make pinwheels. If it gets her off her bed, I call that a win.

In short, we’re having a classic summer so far, wherein life feels too slow and too busy all at once. Complicating everything was Byron’s bike crash a couple of weeks ago. In his Fine Man fashion, he was biking across the city to the Lighthouse for the Blind, ready to do his shift reading the newspaper aloud on the radio for the sight impaired. Going a bit too fast, he hit some loose gravel and wiped out. His knee was well bloodied, and his wrist took some good impact. What was there to do besides get back on his bike and ride to the Lighthouse? They gave him some bandaids and a bag of ice. He iced his forearm for an hour and a half and thought it felt okay. So then he biked to the YMCA, as he was signed up to chaperone Paco’s third grade swimming field trip. Despite not being able to swim, Byron worked the pool deck…and realized his arm really hurt. I swung through the pool area after my yoga class, just to say hi, and the first thing I noted was “You don’t look so good.” At that point, I heard about his crash. He poo-pooed my offer to stay and chaperone while he went to Urgent Care, noting that his presence mattered to Paco. It was good he stayed, as all other adult males peeled off during the swim time, and by the end Byron was the only male chaperone and, therefore, the one who needed to shepherd the three classes of third grade boys through the locker rooms at the end of the field trip.

Thus, once the field trip was over, and I was off taking Girl to soccer, I got a call that Byron had stuck Paco on the back of his bike and taken him to Urgent Care. X-rays revealed a broken wrist. At that point, we tried to figure out how to get his huge cargo bike home–too big for the bus, too big for any bike rack we have. I was just deciding I could drive us home and then run back to the hospital and then try to handle the bike myself, when Byron announced, “I think I’m okay. I’ll just ride home.”

So, yea, that’s my boy. In his temporary splint, he rode home. 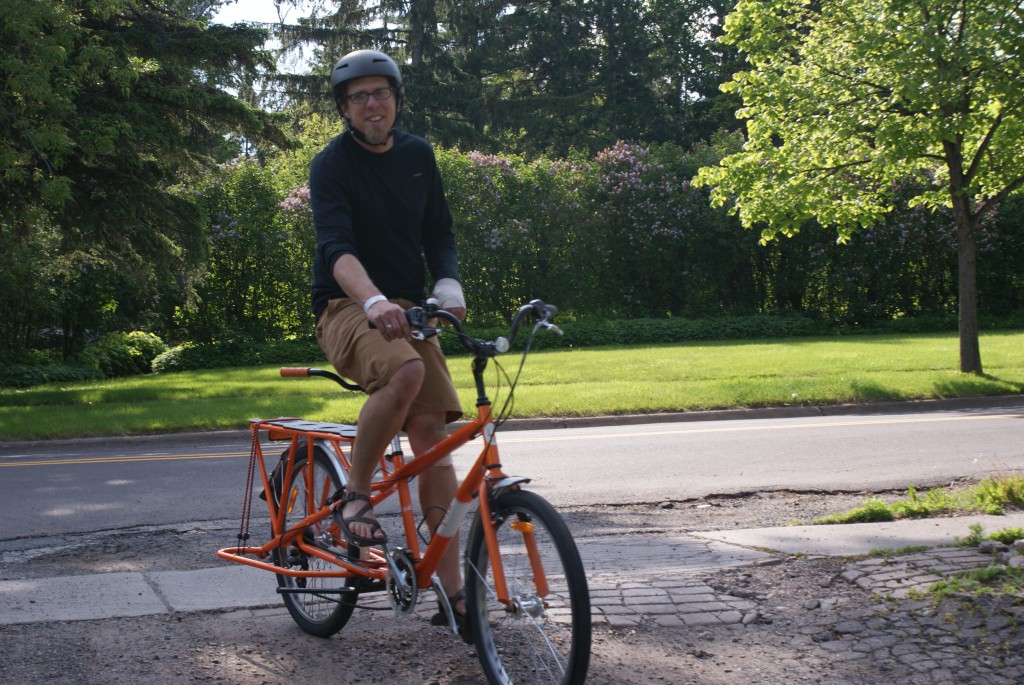 A week later, the orthopedist put a cast on. Because Byron’s the guy who will experience random complications (any long-time readers out there remember the day he got two vastectomies, what with him coming home from the first procedure, having a couple arteries burst, and then having a 4 hour surgery to repair all that?), he’s having a lot of pain and problems with this cast: swelling, hot points, tingling fingers. As of this typing, he’s back at the doc, seeing what’s up. My guess is that they left a screwdriver in there when they were applying the plaster.

Incidents like these allow me to sigh dramatically his direction and point out, “You come across as so simple, but you’re really very complicated, aren’t you?”

The downer of the wrist was nicely balanced by the wonderful evening we had throwing a “Pairings Party.” Although I generally space out most of my running thoughts, once the run is over, I actually remembered my idea to have an end-of-school Pairings Party, wherein guests were challenged to bring their favorite food-plus-beverage coupling. 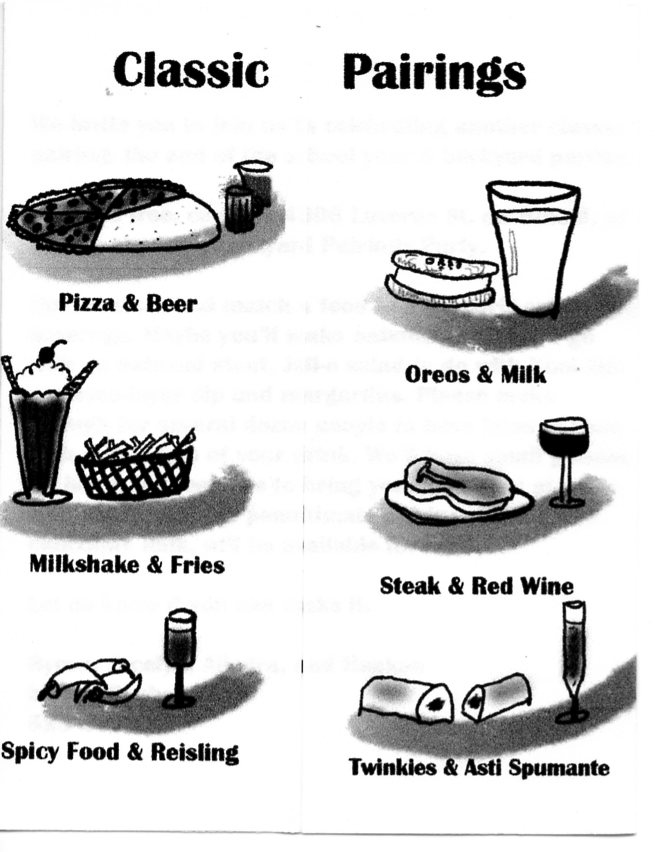 I hadn’t made scones since before we went to Turkey, so it was time: 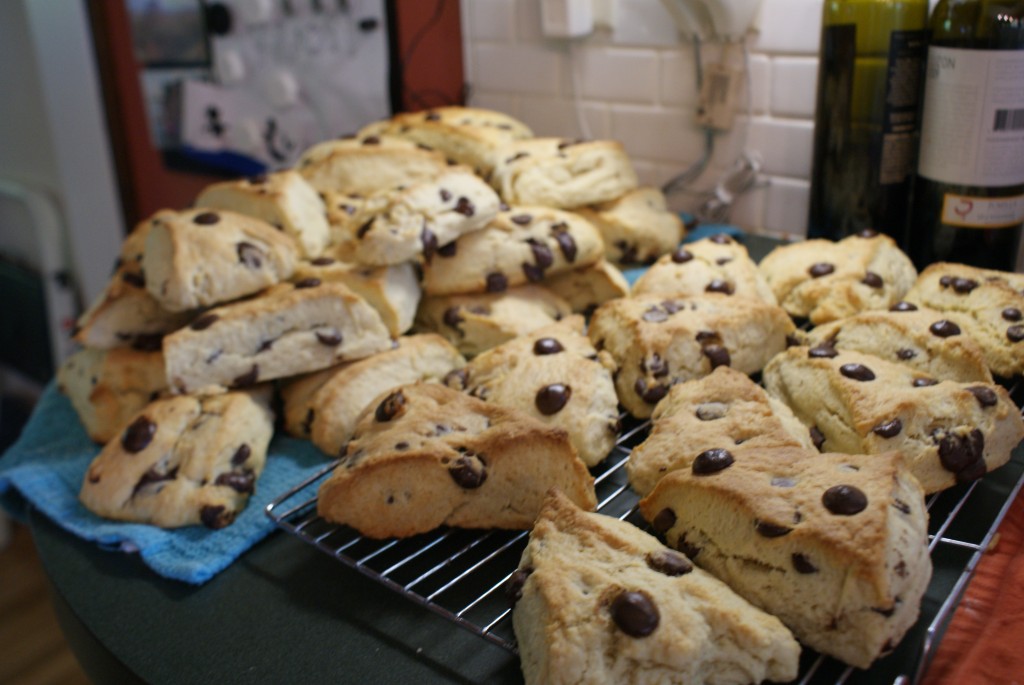 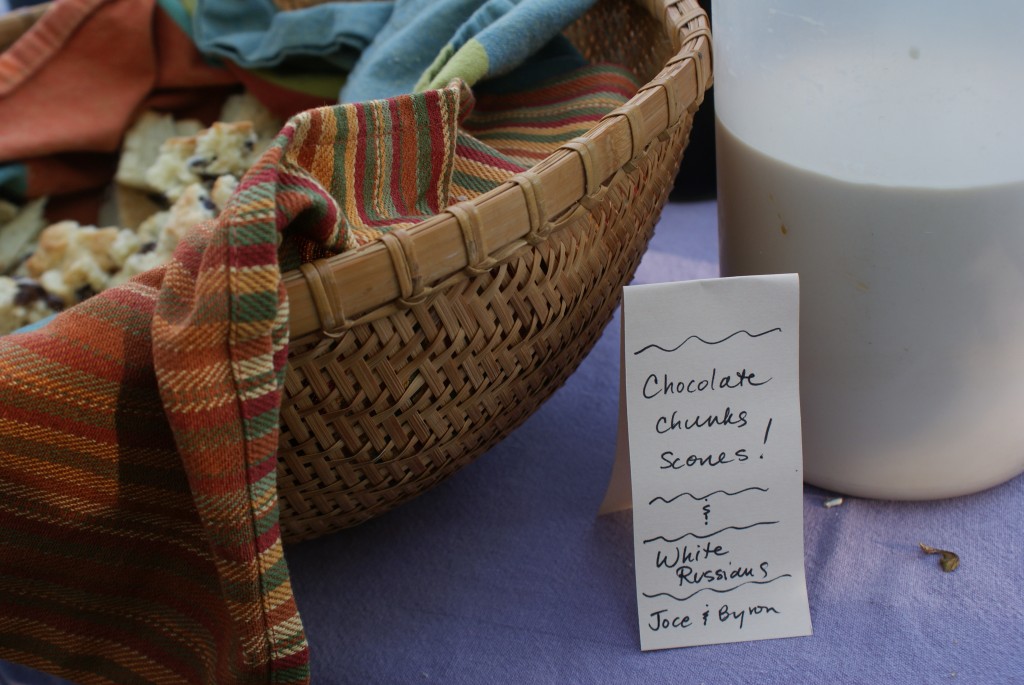 I hadn’t had a White Russian since college, and I must say the pairing worked well together–creamy + creamy. Byron made popcorn topped with brewer’s yeast and coldpress coffee for a drink; it’s his favorite afternoon snack. 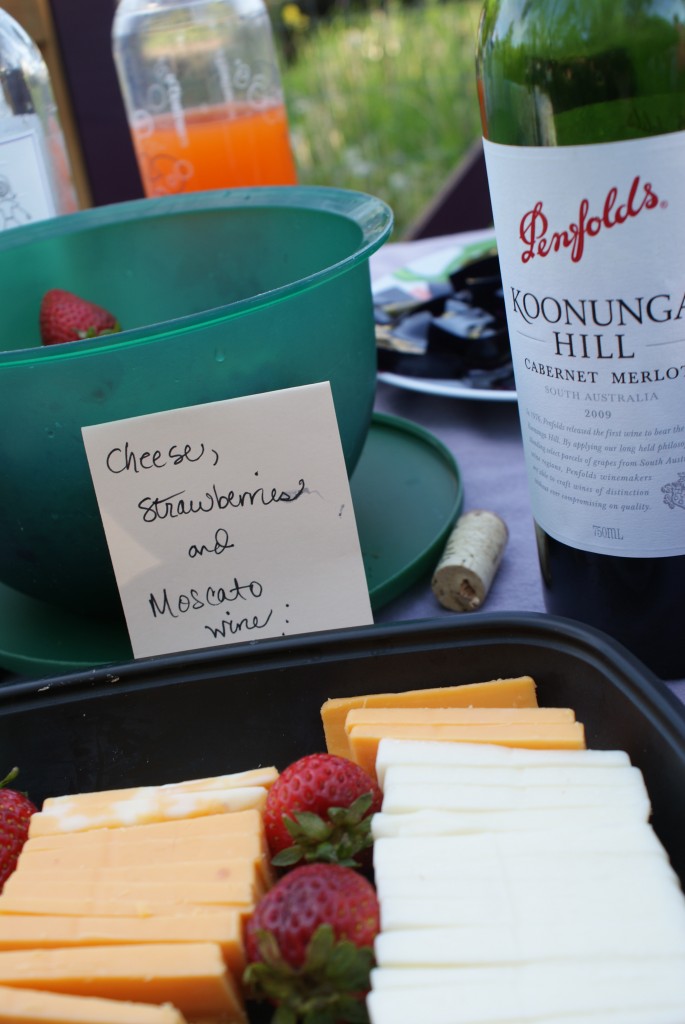 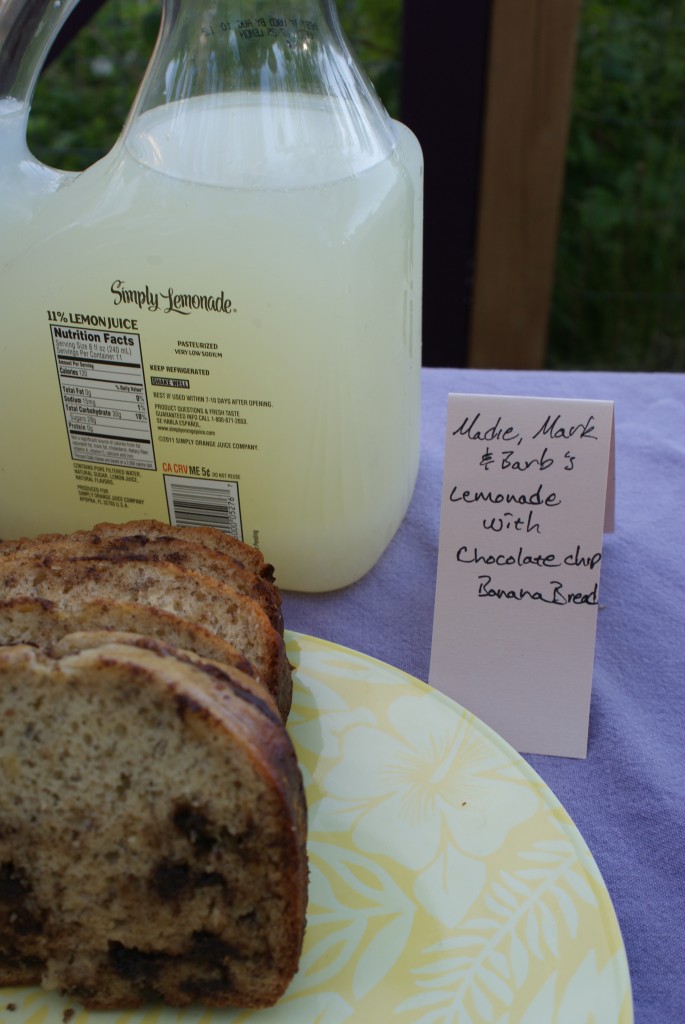 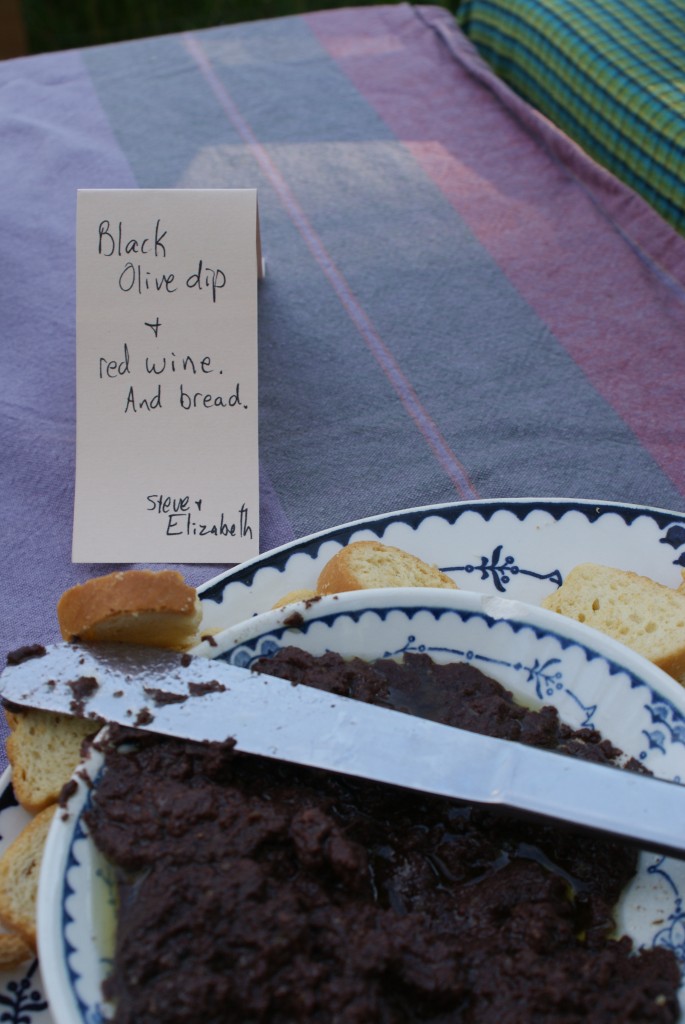 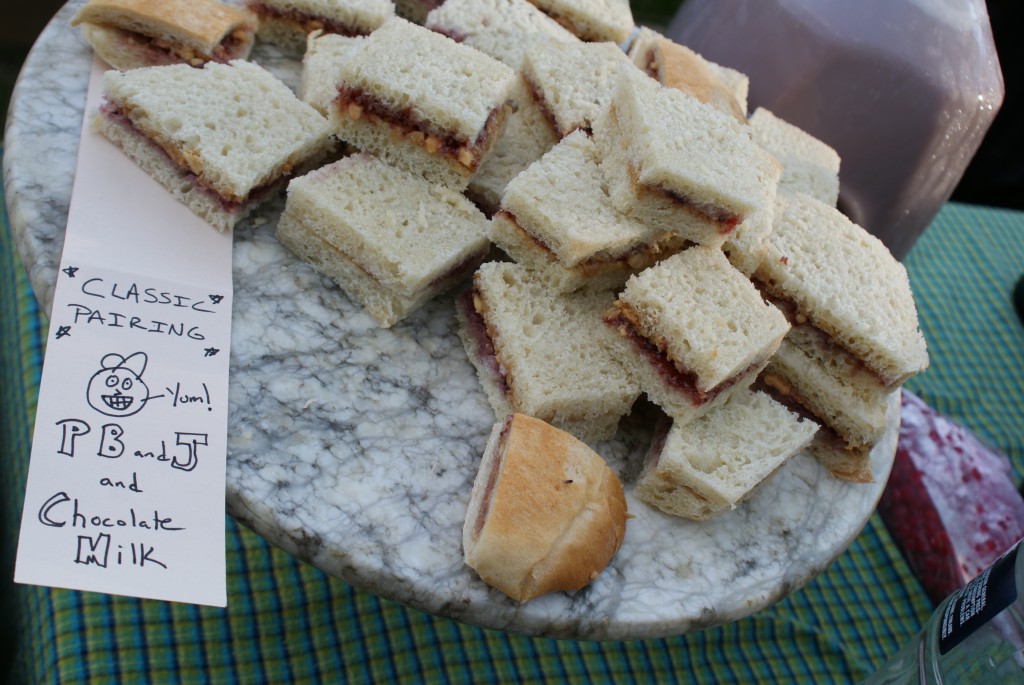 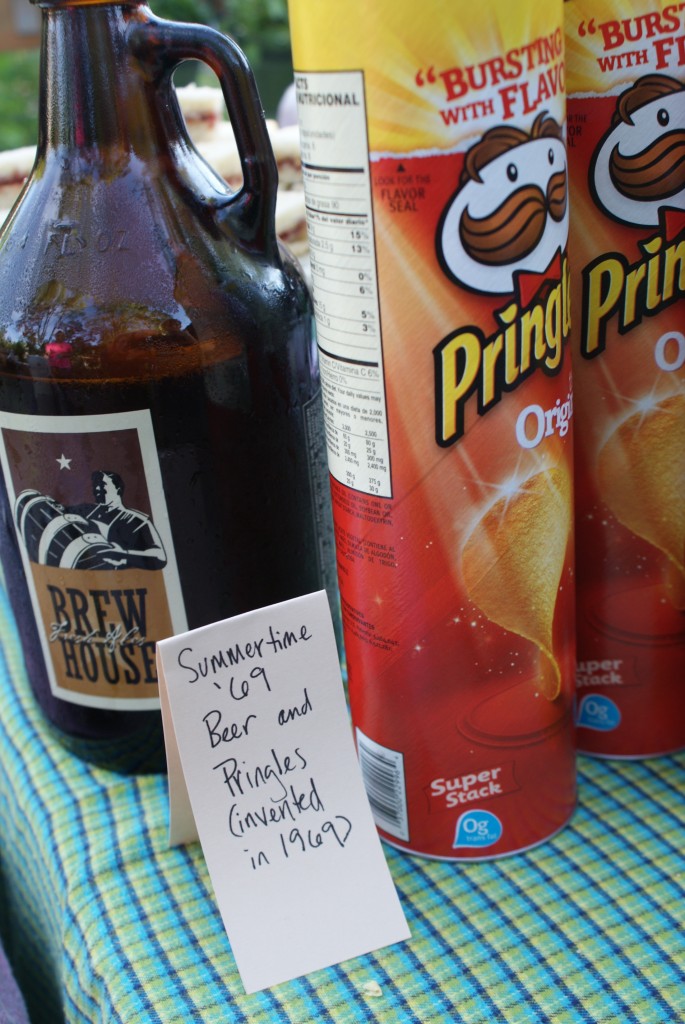 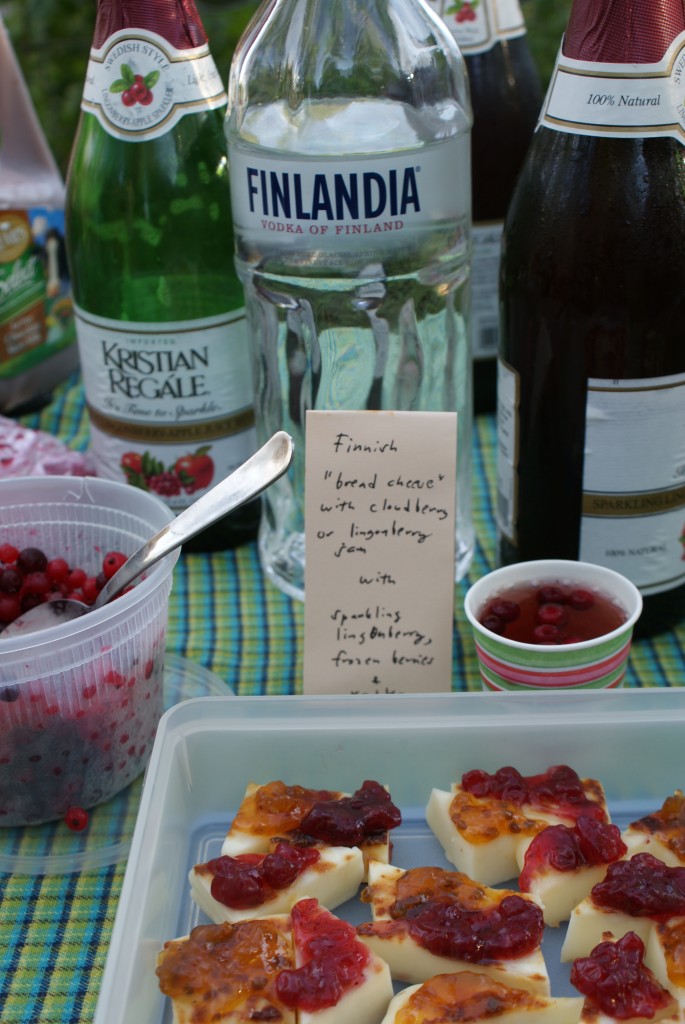 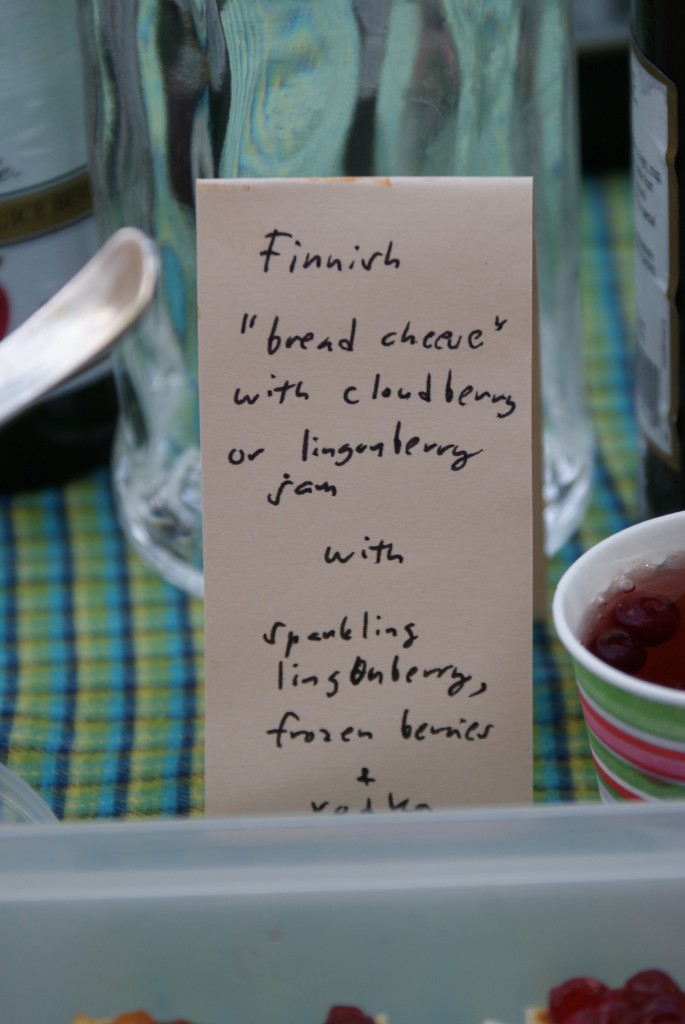 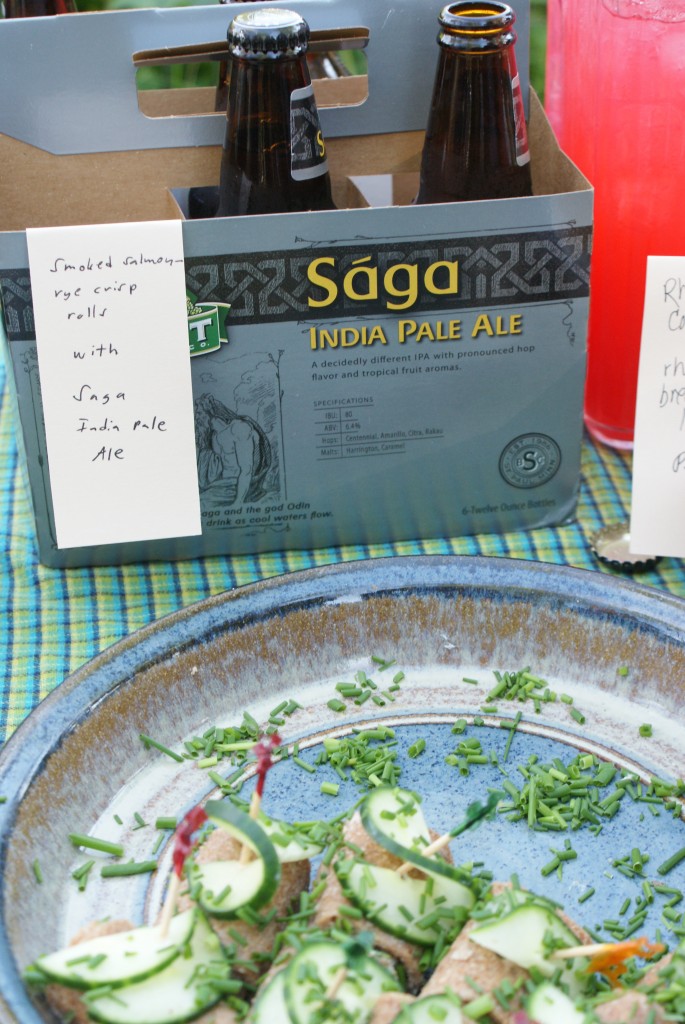 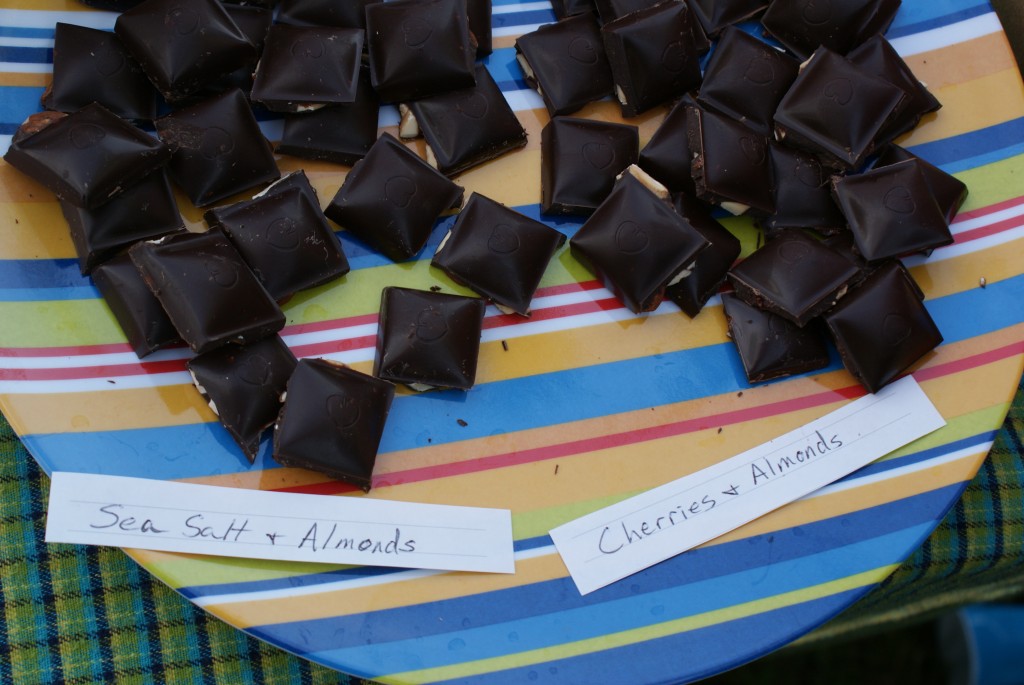 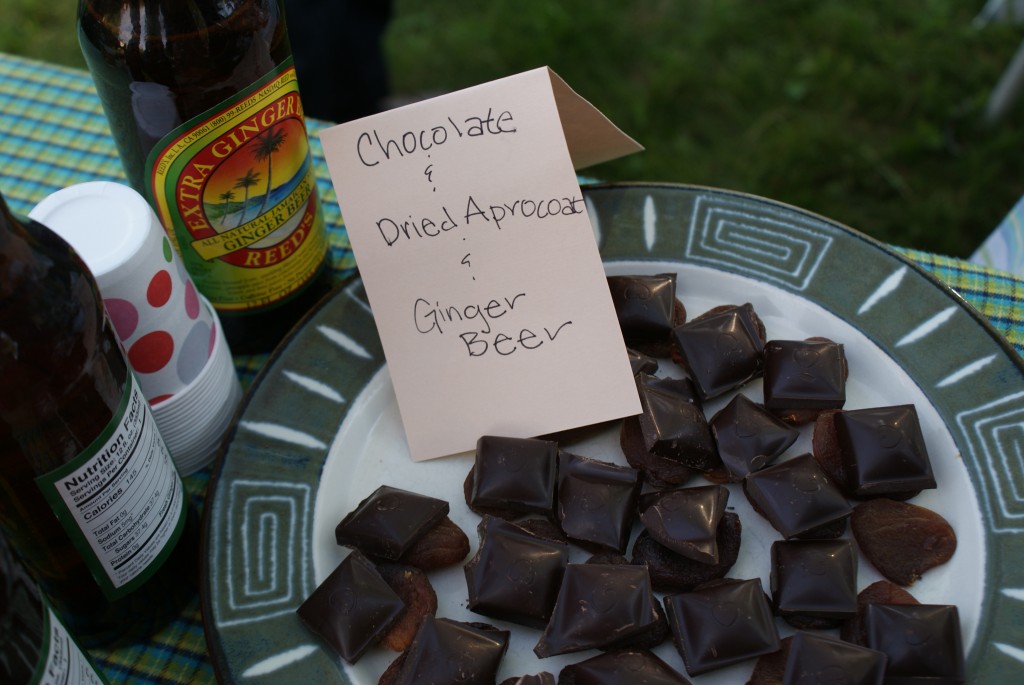 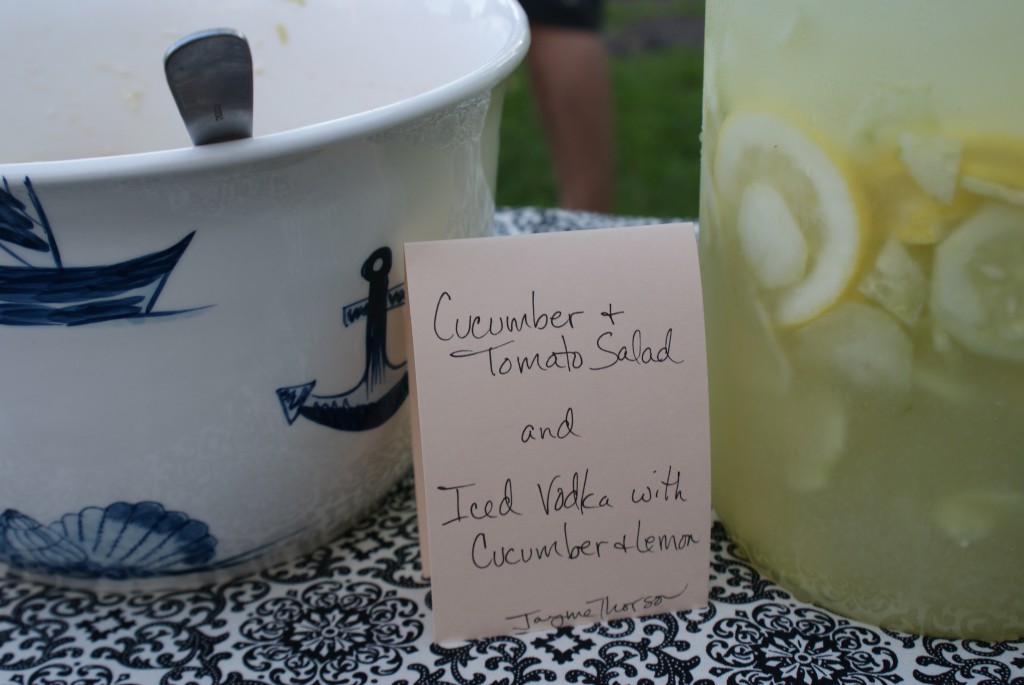 Everyone enjoyed the tasting and hanging out: 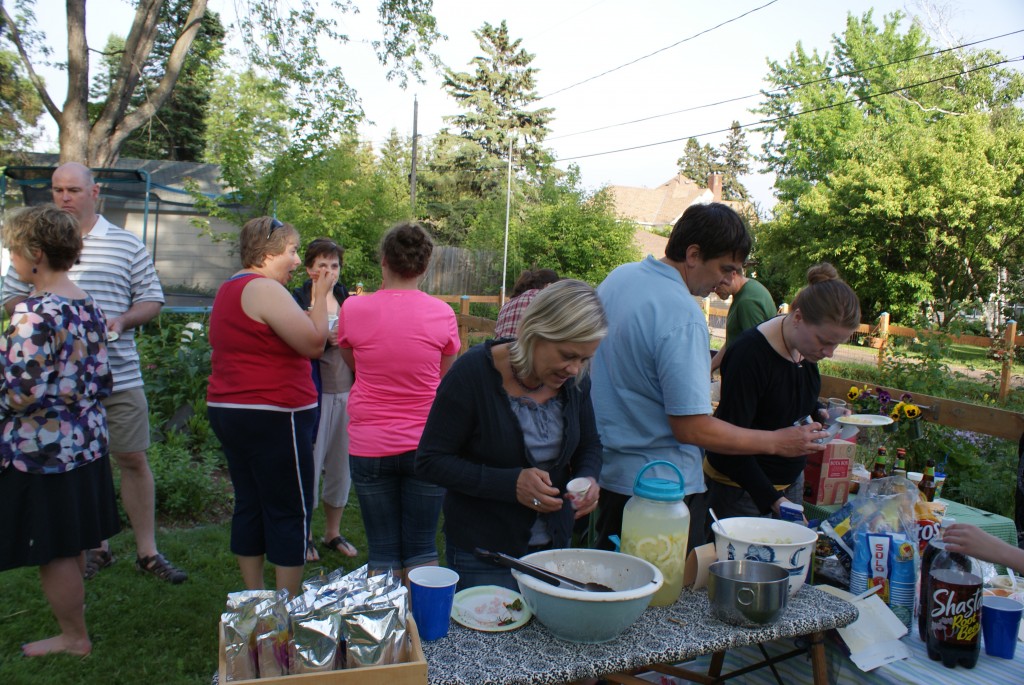 At the height of the evening, we had 18 kids romping around the yard: 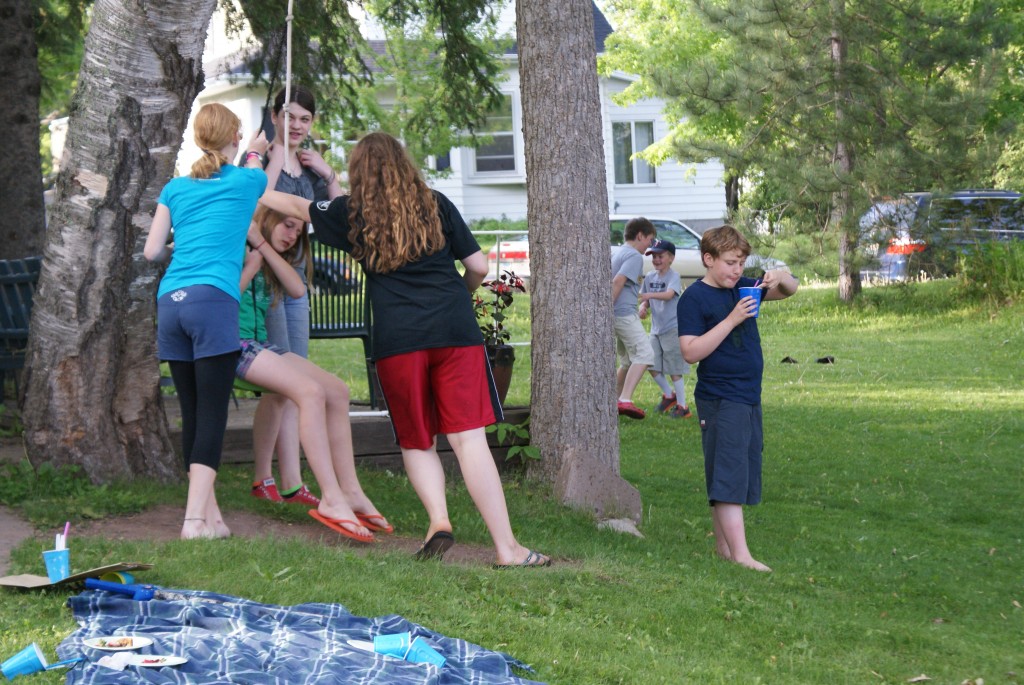 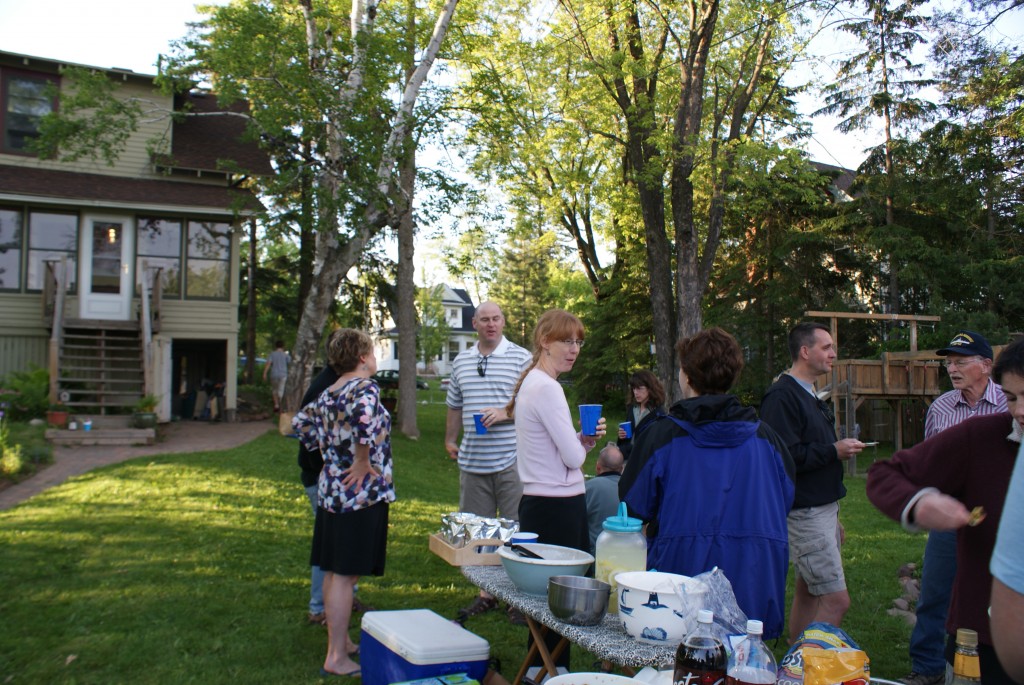 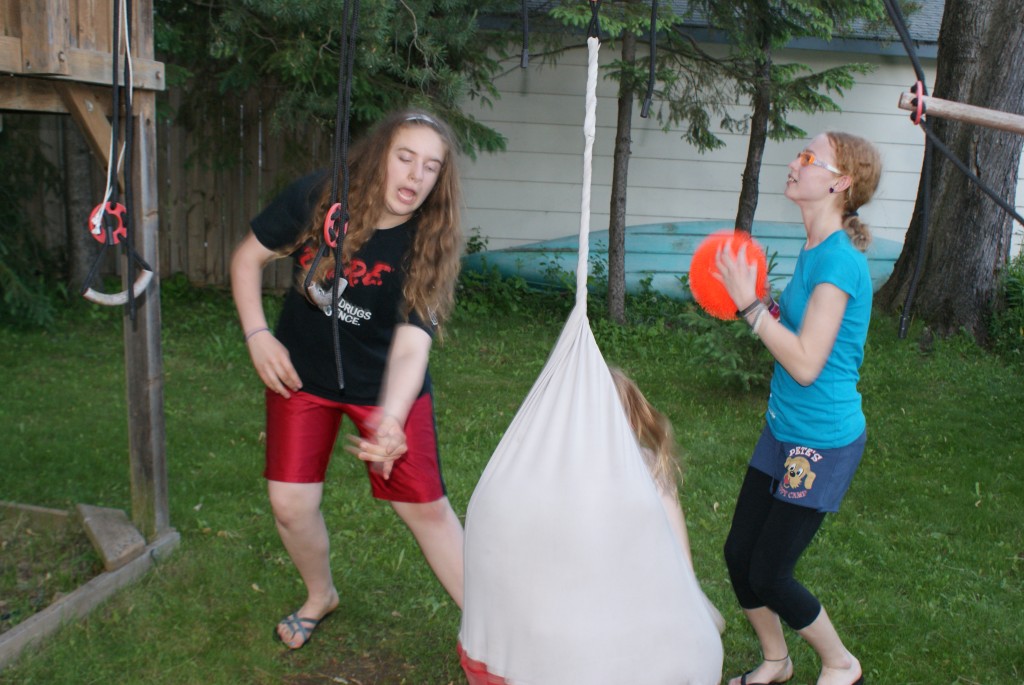 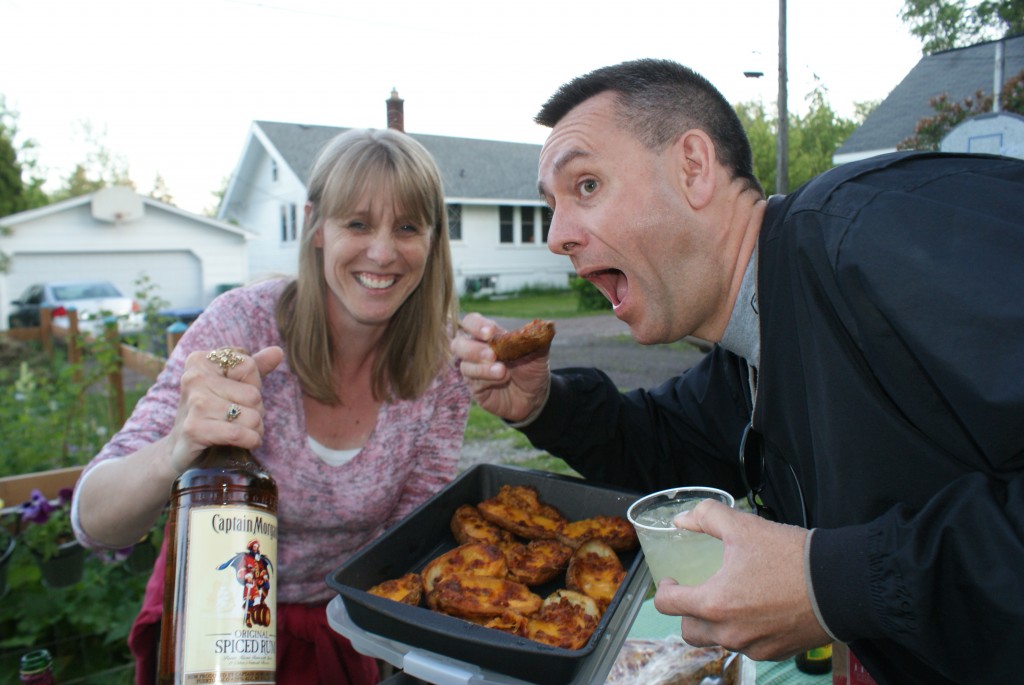 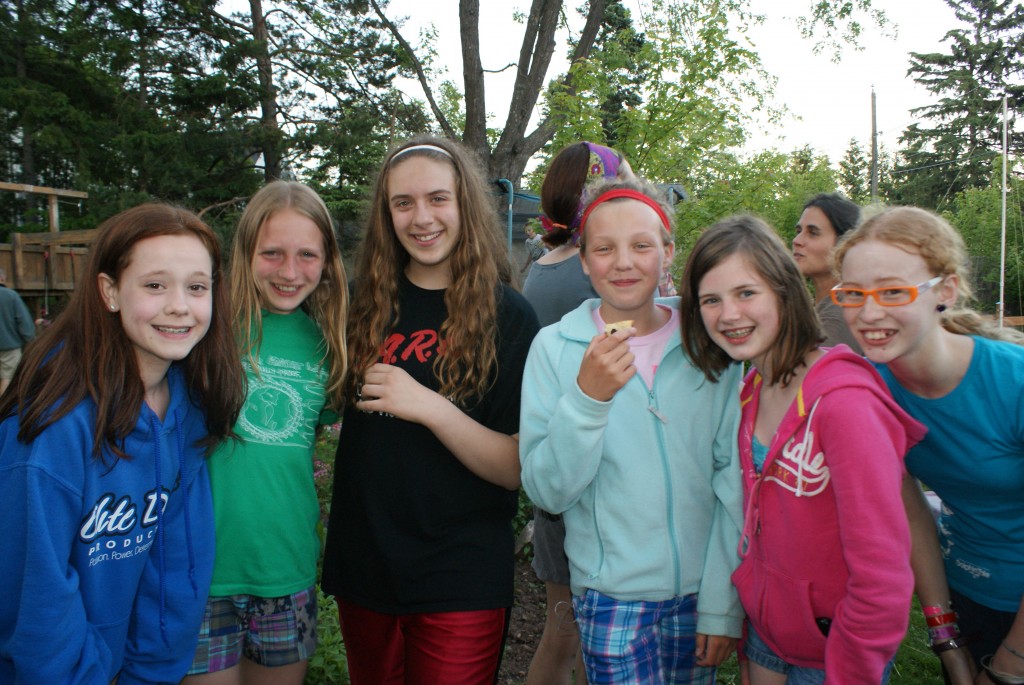 The trampoline saw lots of action: 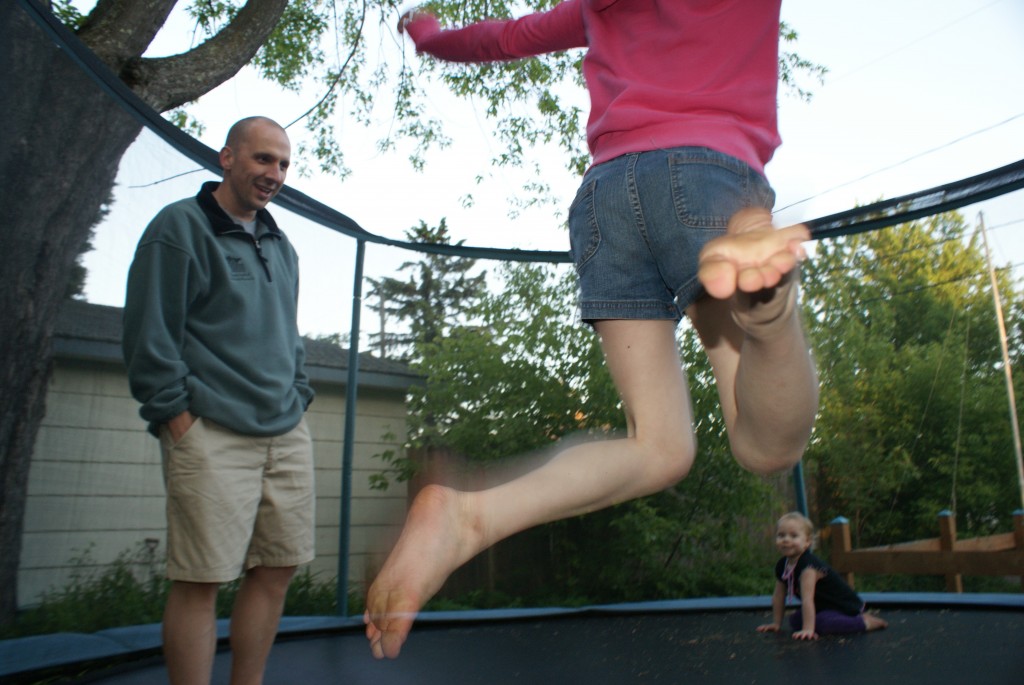 …and then, when it was over, we were back to summer, filling those hours.

Paco decided it would be fun to make duct-tape armor. So Byron put on an old shirt, and Paco and I spent a loooooooooooong time applying a few layers of duct tape (sidenote: apparently being the model for this activity is a great weight-loss strategy, as Byron probably sweated off two pounds, just sitting there). Then we cut the thing up the back, releasing Byron; now Paco can slide into it and look as though his torso is bigger and ready for battle. 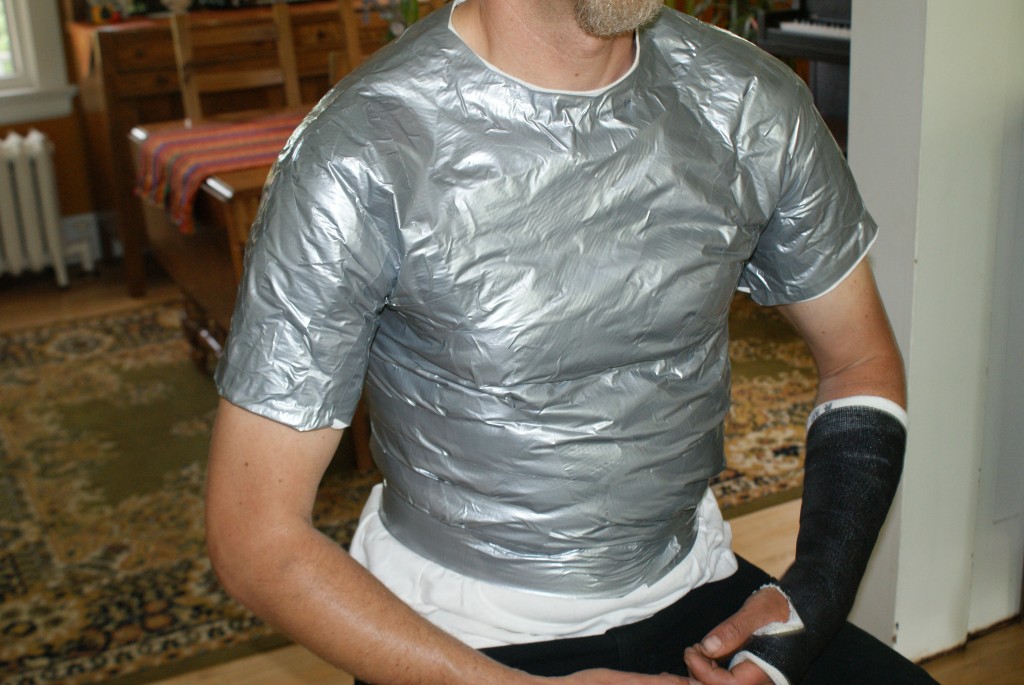 Yes, Byron, you are a massive beast. 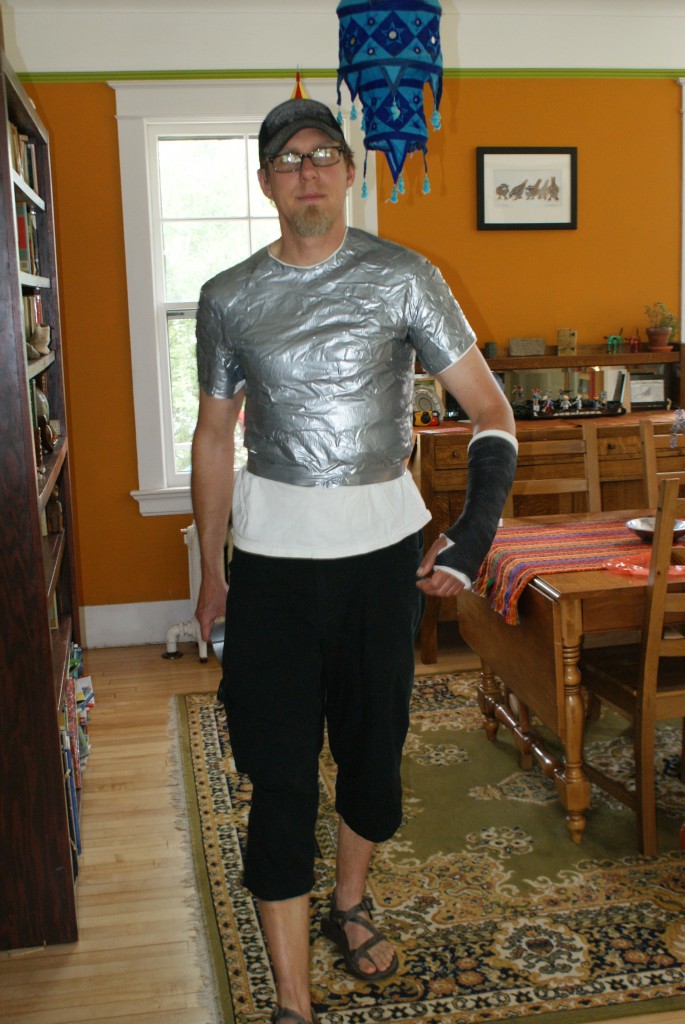 We also had a really great Grandma’s Marathon weekend. Every year, there is a 5K (with about 2,000 runners), a half-marathon (about 6,500 runners), and a marathon (about 6,000 runners). This year, as well, the U.S. Half-Marathon National Championships were held, which added further excitement for spectators. The race course goes right by our house, which means that the neighborhood turns out in full force to cheer, ring bells, and marvel at people’s abilities and endurance.

Our Girl is interested in doing 5Ks these days, so even though I had stopped doing races a few years ago and felt I was pretty much over 5Ks, you had better believe I stepped up with alacrity when she said, “I want to do the 5K, but I want someone else to do it, too.”

The evening of the 5K was much hotter and more humid than anything we’ve had so far this year, so everyone was suffering. As the race announcer noted, “This will not be your night to set a PR [personal record]!”

He wasn’t kidding. It was a misery. One of the men in the top ten collapsed three times in the last hundred yards, as his brain stopped firing correctly, yet his body kept moving. He did cross the finish line, but it wasn’t pretty. Later in the pack, when I was coming in, a young boy behind me had to bend over and vomit a few feet past the finish line.

Speaking of not pretty.

Here I am, pounding to the line between grandpas, as is my way. 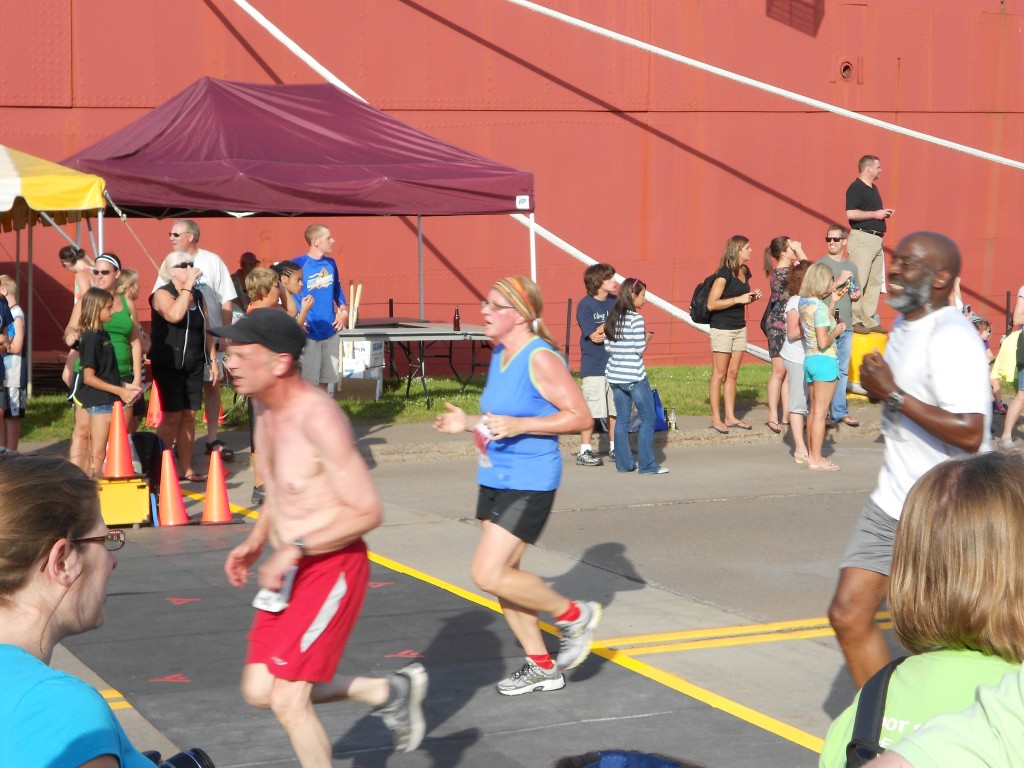 Girl ran the whole thing very well, but she had a tough time with the heat and humidity. Her best 5Ks are still in front of her, which is just as it should be for a twelve-year-old. One of her good friends (and her sister and dad) ran the race, too, so it was a jovial time, all in all. 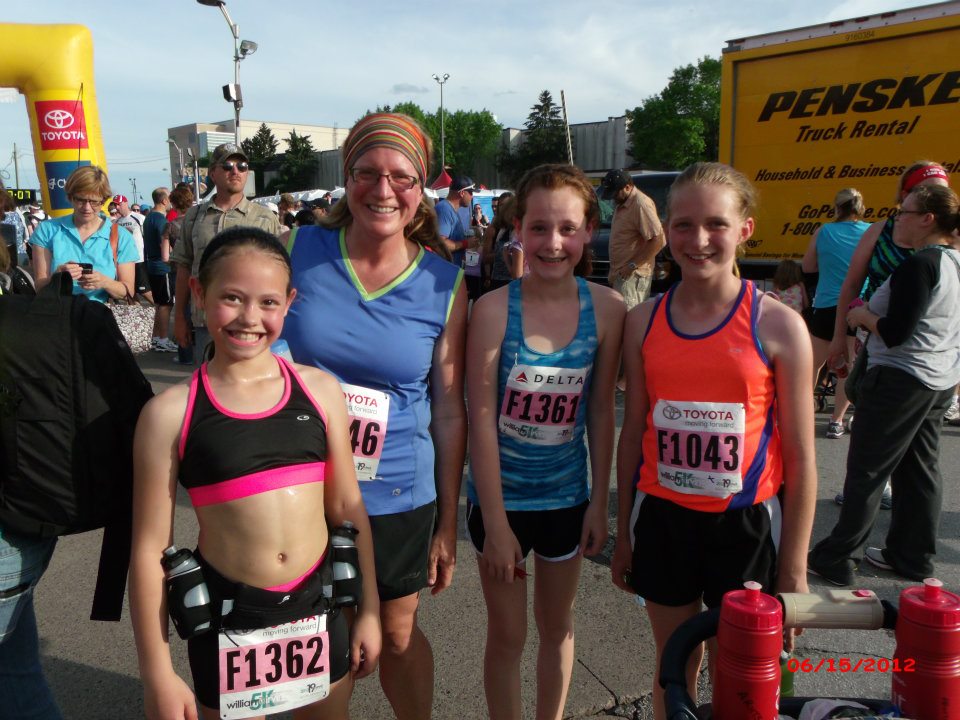 Races are always way more fun once they’re over. 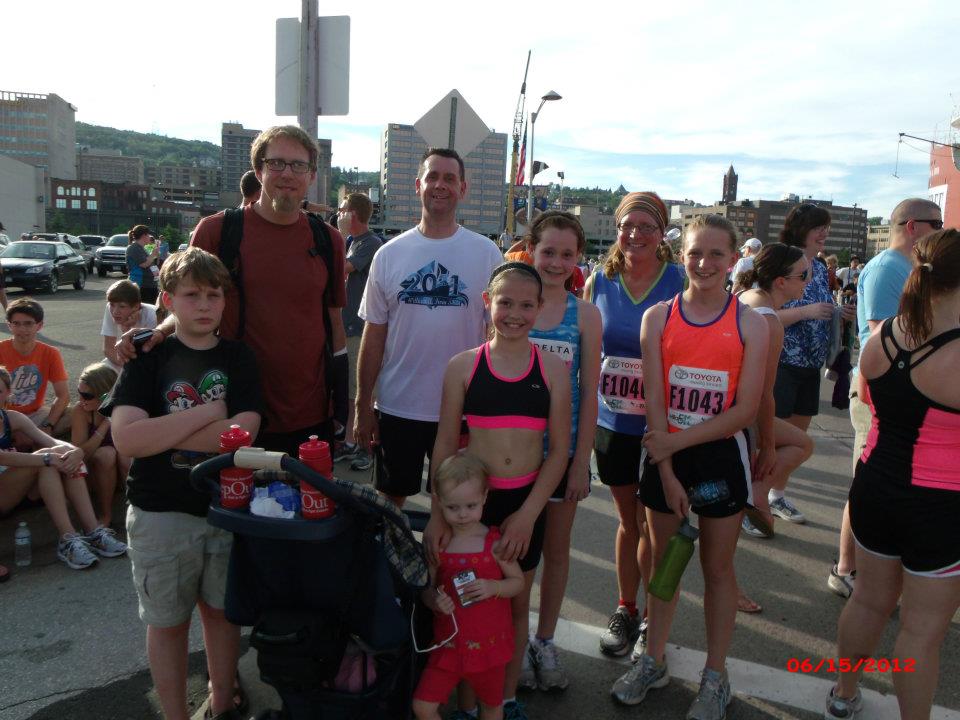 Can you guess which long-suffering person in the above photo is not a fan of heat and having his picture taken?

The morning after the 5K were the half-marathon and the full marathon. We were down on the race course before 7 a.m., ready to see U.S. Olympic marathoner and native Duluthian Kara Goucher speed by. She won the women’s national championships and set a new course record. News footage that evening showed her grabbing her toddler at the finish line. I was left thinking, “When I had toddlers, it was all I could do to put my feet on the floor each morning and hoist my body off the mattress. I was more Groucher than Goucher.” 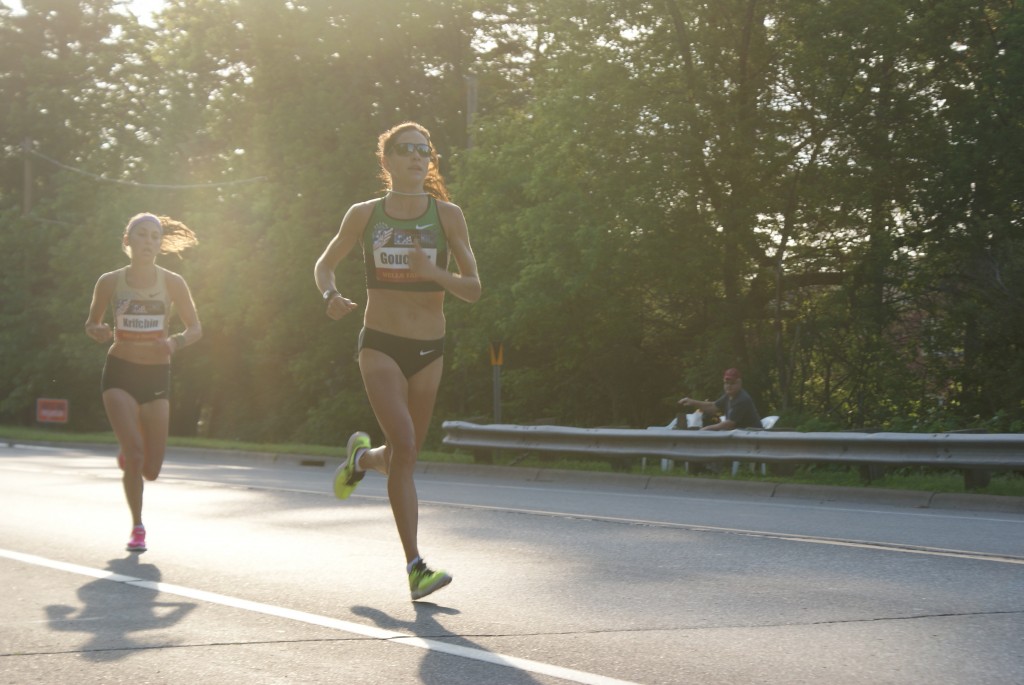 The men’s championship was won by Abdi Abdirahman (for a good time, say that ten times fast), a Somali-American who will be representing the U.S. in the marathon this summer, as well. I tell you, when these elite runners whoosh by, it’s such a powerful whisper that my heart beats differently for a few seconds.

I may have to say “HUH?” when people mention The Packers or The Vikings or The Twins, but I’m hella good race geek. 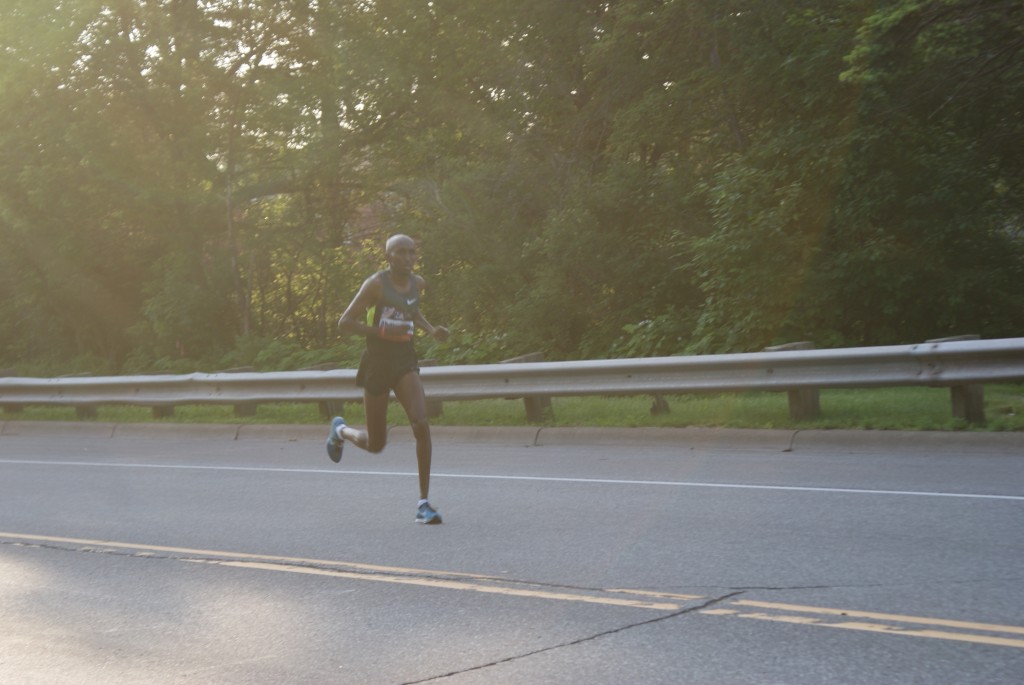 Capping off the race watching for me was this guy. He reminded me that I may sometimes struggle to get through the hours with the drifters that are my children, 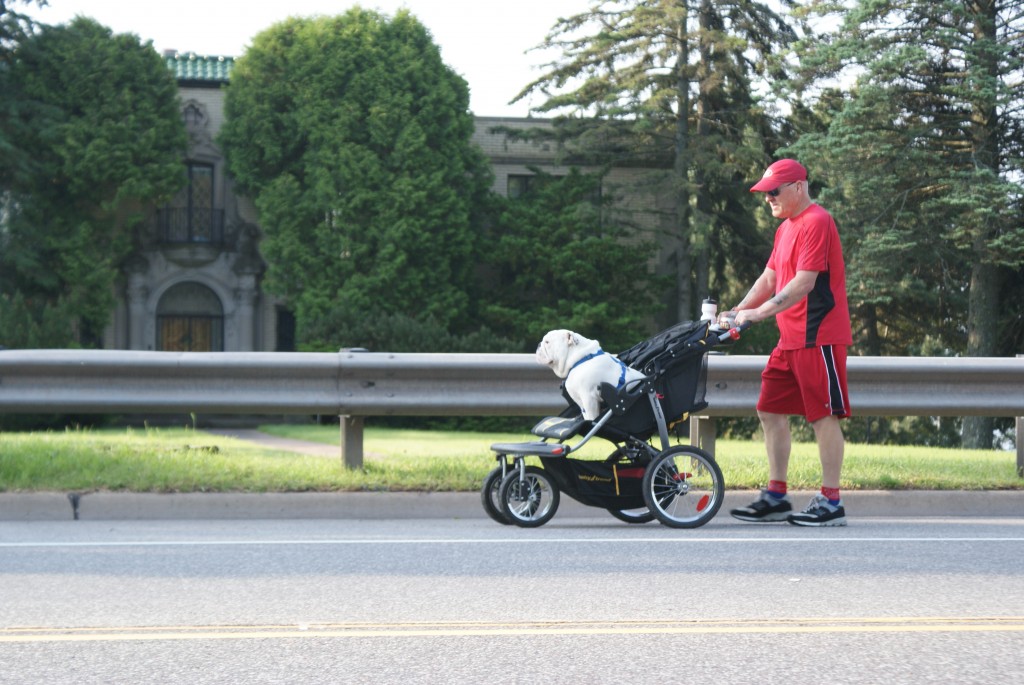 …but at least I’m not pushing a dog around in a stroller.

Of Casts and Pairings