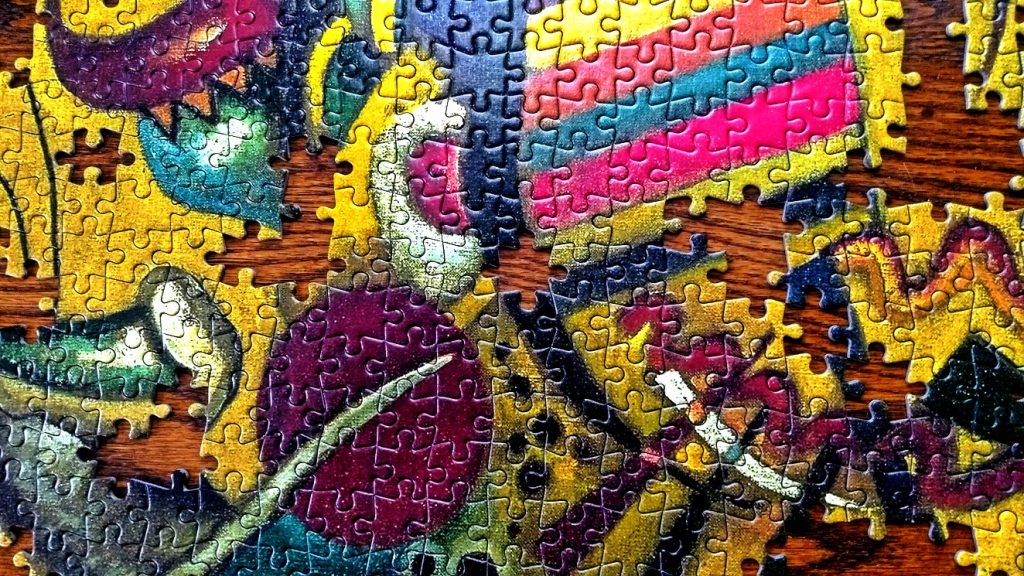 I’m feeling desperate, like it’s never going to be right. No matter how hard I sit, think, mull, adjust, examine, and strategize, it’s all just OFF.

It shouldn’t be like this. I hate it. If I have taken care and been conscious and careful, it should be right. But it’s not. It’s all just fucking OFF.

Slumped on a piano bench, tucking my cold hands into the sleeves of my massive “house coat” of a sweater, I keep staring, fiddling, futzing, trying to fix the problem I’ve created. All the joins around the border look good, and trust me, I’ve put my eyeball close to each one, looking for subtle mismatches. Frustrated, I pull out a few pieces from the upper left and try them in a spot down lower. Nope. Eventually, I count the pieces along the top and bottom — 25 and 25, not that there should necessarily be an equal number, but an equal number there is. Then I count along the sides, 40 and 40.

So what the holy 14-year-old mother of Jesus is going on with this stupid puzzle.

Wanting the universe to know how I really feel, I hiss “Fuck, fuck, fuck” a few more times. There. Now we have clarity. I am stymied and full of fucks.

As is always the case, this puzzle, an image of Kandinsky’s Points, is an object lesson. There is the patient sorting of the pieces after they’ve tumbled out of the bag; there is the methodical attack of assembling the border; there is the heady rush of pulling brightly colored pieces and easily finding their mates; and then, for a very long time, there is the slow drudgery of forty shades of yellow. Beyond that, there are the missteps, when two pieces are confidently snapped together, only to realize a week later that they have fooled with a false relationship, for they don’t belong together at all.

An English teacher, I have deep appreciation for the metaphor: every jigsaw puzzle tells a story, not just of the image but of life itself.

And with Kandinsky’s Points, life is a sucking bag of fucks.

The problem is this: once I had the bright colors worked out, the middle of the puzzle was a floating island of rainbow, and everything was grand. However, once I got in deeper and started adding some of the duller bits, the island reached a point where it could be moored to the border. The mooring was my undoing — because once I attached the island, the entire puzzle was thrown off, no longer true: the top left border jutted too high, the right hand straight bulged like an inguinal hernia.

It was at that point repeated sessions of staring, fiddling,and futzing began, all accompanied by a foul-mouthed soundtrack of frustration.

After a couple days without resolution, I decided to follow the advice I give to students: “Use your resources.” Tugging at the shirt of my best resource, I dragged him to the puzzle, showed him the bulge and the offset, emitted a couple whiny swears, and asked if he could help decipher the problem.

“Of course,” said Byron. “This is my kind of challenge. I’ll sit down and look at it sometime soon, when I’m not in the middle of making dinner.”

Drawing upon a patience learned from countless jigsaws, I nodded reluctantly and thanked him in advance for sanity restoration.

A day went by, and he hadn’t looked at thing.

Then another day went by.

HOW MUCH PATIENCE COULD A PUZZLER BE EXPECTED TO HAVE, my haywire brain started wondering.

Certainly, he had cause to leave me hanging.

One evening, a day after I’d requested puzzle help, we were eating dinner in front of an episode of Orphan Black, laughing at Helena (“Sestra”), my all-time favorite television character, when the phone rang. As always, our immediate reaction was “Who the hell would dare to make a phone call?” Since it was fairly late, there was the possibility that this call mattered, so Byron hoisted his tired bones from the couch and answered it.

It was for him.

Eavesdropping from my warm spot under a blanket, I heard “Oh, I’m sorry to hear it” followed by “I don’t feel comfortable with that.”

Two minutes later, he was back on the couch, explaining that the call had been from the woman who was to partner with him the next morning in a shift of newspaper reading on the radio for the blind. Turns out, she wasn’t feeling well. Turns out, she had an idea. Turns out, she has realized, during her 12 years as a reader on the radio for the blind, that if both readers don’t turn up for a shift, then the solution is easy: nothing happens. No one reads. No one is at fault. So she had called to propose to Byron, who’s been doing this volunteering gig without fail for 15 years, that they both not show up the next morning — which explained his “I don’t feel comfortable with that.”

Nah, Sis. You have sadly mistaken the character of your reading partner.

The next morning, my puzzle still tragically askew, Byron woke up early, as is his way, and got a crock pot dinner started by 6:40 a.m. Leaving half a French press of coffee on the kitchen counter for me to enjoy when I awoke much later, he hopped onto his massive cargo bike and pedaled an hour across town to the radio station. There, solo, he prepped the day’s newspaper articles before launching into almost two hours of reading the news to vision-impaired subscribers. By 11 a.m., just as I was stroking a sad finger, and surely fingers can be sad, across an off-center maroon circle in the Kandinsky, my dear husband was back on his bike, heading to work.

From noon to 8 p.m., he hoarse-throatedly assisted patrons at the library, attended meetings, and did his part to provide a safe haven for all kinds of Fortunates, from highly to less. Then, at 8 p.m., while my tragically slanted puzzle sat in a darkened room, questioning if anyone would ever find time to care, Byron biked to a local theater where a play about a farm transfer — Duluth rolls hardcore on the arts — was being performed. Enjoying a few moments of downtime in public, he waited in the lobby for the performance to end and chatted with an old friend. Eventually, the play over, Byron was able to meet up with two of its attendees, the farmers from whom we buy a pig every year. They live in Wisconsin but had come over for a night of theater, bringing with them our butchered pig, ready to hand off.

And this. Was the point. Where Byron earned a new nickname.

I wish it were Pig Fucker.

Alas, it is merely Pig Biker.

Because, 15 hours into his day, that man I love — PIG BIKER — loaded 120 pounds of pork onto his cargo bike and pedaled it home, his tires cutting a trail through a skiff of new-fallen snow. At the house, he offloaded the meat onto the back porch and came inside, announcing, “It’ll be fine out there for the night. I am not dealing with getting it into the freezers right now.”

Happy to see Pappy, I poured him a beer, the kids swirled around with their updates and needs, and suddenly it was 10:15 p.m. before we were sitting down to dinner.

Much to my credit, I didn’t wave my soup spoon towards the catawampus puzzle while we ate.

Two days later, though, the puzzle’s unrelenting wrongness started impinging on my ability to carry on. I’d figured out enough of the center section that some pieces were starting to overlap. It was time to get serious with my resources.

Grabbing My Best Resource as soon as he got home from a run, tugging him to the table by his shirt hem once again, I reminded my groom of nearly 18 years that puzzles are metaphors for life, and the crapass fuck-upedness of my current puzzle was starting to make me think I needed to adopt a hunch and a cane.

“Oh, yeah. I do want to sit down and figure this out,” the sweaty guy recalled. “I’ll do it a bit later.”

“Ahhh, hey, look,” he said after a few minutes, pointing to one piece in the moored island of color. “That line goes through the middle, but it doesn’t match up with the one it’s hooked into.” His hands worked fast, pulling the offending piece, sliding such-and-so over a bit, this-and-that up a tidge.

Just as he has, again and again over the years, with quick insight that changes my entire approach —

Just as he has, every day from dark until dark, with logistical aplomb —

Just as he has for 18 years now, with no hint of resentment or annoyance, with genuine care for my inconsequentials —

Byron fixed what ailed me.

My frame was askew, bulging wrongly here, shooting crazily there.

But then he came along and put his hands on it; tweaking, observing, joking, he righted the cockeyed complexity that I brought to the table.

Eighteen years ago, on an unseasonably warm and sun-lit November day, during a weekend where he consulted spreadsheets and I talked a lot, Byron and I publicly declared our commitment to each other.

And there hasn’t been a piece out of place since.