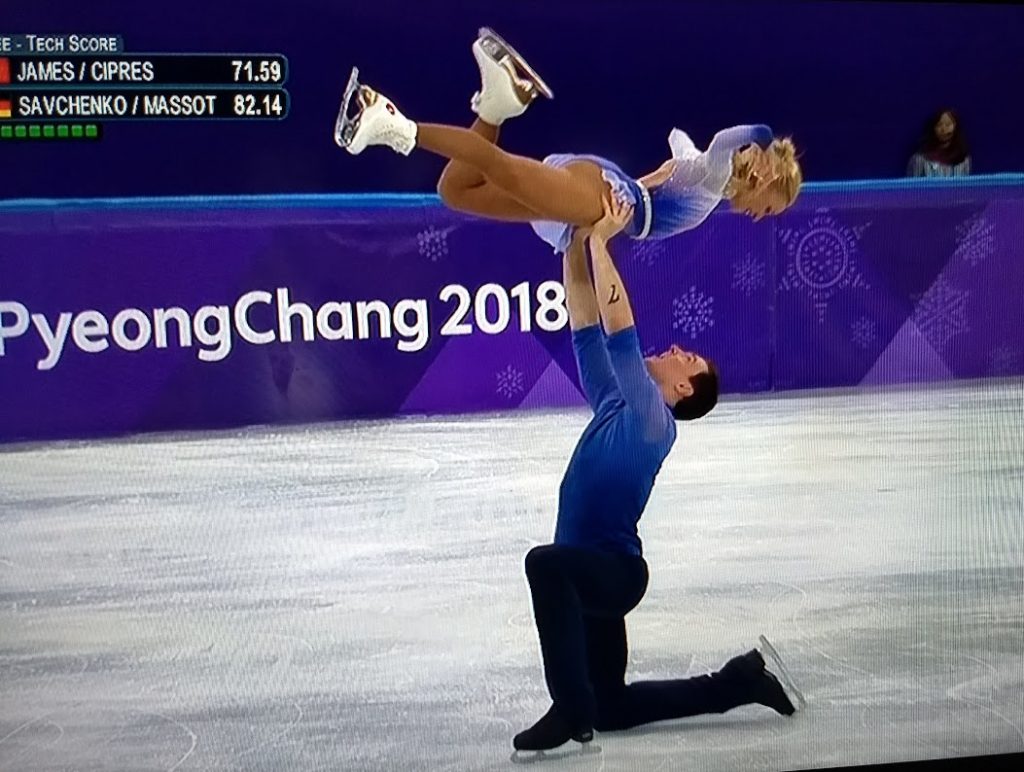 “There’s something about her face that makes her seem a little evil,” I told Byron as Aliona Savchenko and Bruno Massot glided onto the ice, readying themselves for their freeskate. “Don’t get me wrong: I love her nose and chin; they work together in a way that’s really arresting. But in my casting, I can’t help it: she’s always a villain.”

Although this patter was a legitimate expression of important things on my mind, my subconscious was probably trying to make the goings-on on the screen more interesting to Byron, traditionally a reluctant watcher of skating. This year, he’s been better able to hang in there during skating coverage, progressing to the point where he can yell “TWIZZLE SEQUENCE” when I quiz him about what dance pairs are doing. For a guy who, a year ago, called footwork sequences “prancing,” this ability to recognize what he’s seeing is a big advance. When I pet his knee and compliment him on Being a Better Skating Fan, he acknowledges, “I can remember ‘twizzle sequence’ because it reminds me of candy.”

Whatever works, pal. I can only remember what Mercutio does in Romeo and Juliet because his name sounds like “mercury” which is what’s inside old-school thermometers, and thermometers are shaped like tiny swords plus, also, if you get a really high fever, you can die.

In case I haven’t mentioned it lately, you totally should take one of my literature classes.

As Byron and I stared at the screen for the next five minutes, not only were we assessing Savchenko’s face, we also were witnessing a truly fine program, every move executed to perfection, each partner hitting all the marks. For me, this was a relief after Massot had doubled a triple in the short program a few days before, putting him in the doghouse with the villainess in charge. It was his error that had them entering the final skate in fourth position, his role as “lesser skater” in the duo that rendered him the supplicant, his every posture one of “I hope I can be good enough, so she doesn’t lock me in the freezer again.”

At the end of their performance, both Massot and Savchenko knew it had gone well — they knew they had a shot at a medal better than the two bronzes Savchenko had won in previous Olympics with a different partner. They had been flawless. Now, it was a waiting game.

They watched the Canadians (who had already won a gold medal at these Olympics in the team competition). They watched the Chinese (who were in the lead before the freeskate). They watched, wincing along with the world, the Russians, whose music and costume choices caused even my friend Johnny Weir to crawl under his chair (“Nobody loves Christina Aguilera more than I do, but this pair is a little square to be giving us ‘Candyman’ realness”) and my other friend Leslie Jones to hurl costume-hate at her screen about “…that fuckery polk-a-dot shit…”.

Through each successive performance, they waited.

It’s the waiting done by Savchenko and Massot that has us all gathered here today.

Because, my guys, their nerves-on-edge, twitching-like-they-were-jonesing, hearts-in-throat, second-stage-of-labor postures were something to see — better even than their spectacular triple twist, which Savchenko landed as softly as a young Massot creeping out of the freezer after she locked him in for boofing his prancing.

Oh, yes, for both Byron and me the other night, it was their wait that deserved the gold.

the snot and tears of champions —

Ladies, gentlemen, and the non-binary gendered, I present to you now a story of triumph and joy told in seven GIFs featuring some of Massot and Savchenko’s finest work. Before you watch: grab a tissue.