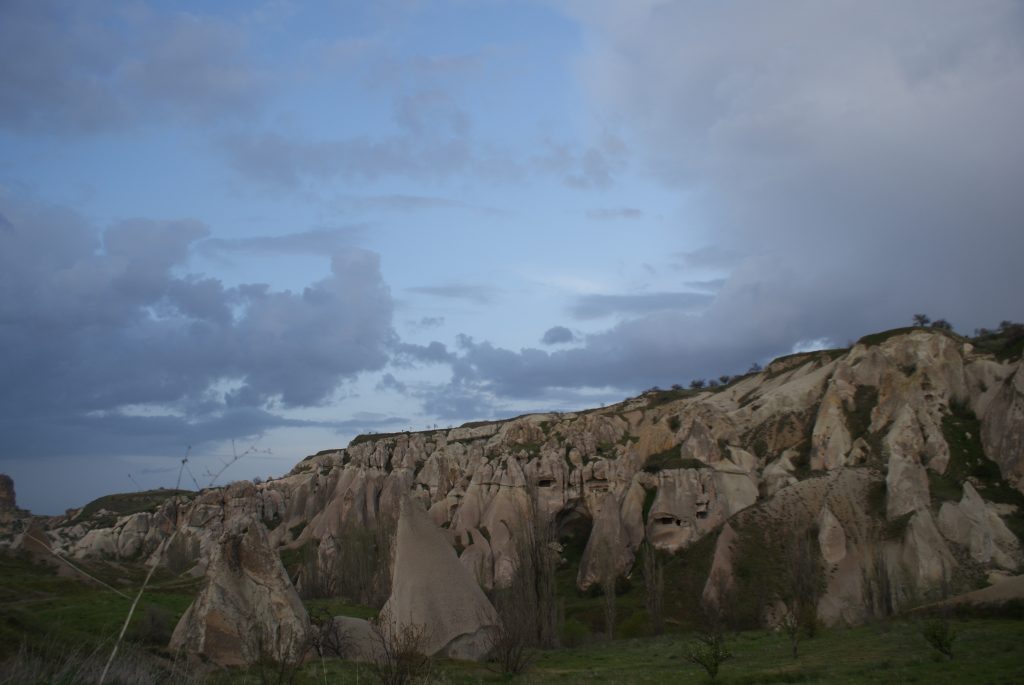 I like to pretend that life is a musical wherein all the Best Moments are enhanced by atmospheric lighting and the promise of a standing ovation. For me, everything — from the making of pancakes to the folding of laundry — takes on a brighter sheen if it is accompanied by high kicks and jazz hands, all the better if someone emerges from the wings wearing crinolines or drops from the rafters strapped into a harness.

One autumn day in the Cappadocia region of Turkey, however, I was forced to concede that sometimes drama is overrated.

Three months into our whimsical sabbatical year of living abroad, my family had experienced stunning summer heat, but the change of seasons introduced us to a new genre of weather. That October, the stage had been draped with striking scenery: the skies were unrelentingly grey, with ominous clouds hanging overhead that unleashed into pounding sheets of rain which seeped under the door jam and soaked the threshold of the 400-year-old stone house we were renting. Contemplating this dreary backdrop, I was reluctant to explore new valleys and canyons around the village when I went out running, thinking that I’d rather venture into new landscape theaters on sunny, classically-autumn days and avoid the stark topography that smacked of Ibsen more than Gershwin.

Since the weather didn’t seem to be shifting, though, and my time in Cappadocia was ticking away, I decided to throw myself out there and break a leg.

Late in the afternoon, I headed towards the crumbling monastery outside of the village and navigated the warren of trails that zigzagged throughout the valley below. Humming, I took a left whenever the trail diverged. Eventually, I was beneath a panoramic overlook frequented by tour buses that disgorged French and Korean travelers in search of a photo op.

Soon, I realized the overlook tourists were noticing me far below them on the stage of the valley floor–a living, breathing part of the spectacle they’d been ogling, and I fought the impulse to belt out an echoing “Everything’s coming up roses and daffodils” à la Ethel Merman in hopes that my performance would be rewarded with a shower of Turkish lira, raining down from the appreciative audience.

At that moment, a long roll of thunder resonated across the valley, and the action began to rise. Looking up, I saw not stage lights but a black cloud moving with startling swiftness towards my mark. Just above the rapidly re-bussing tourists, the sky popped white with lightning.

There’d be showers raining down upon me all right, but it looked like my show had received the worst of reviews, and early cancellation was imminent.

Crikey. I was a half hour’s run from home, standing at the foot of a cliff somewhere in a confusing valley in the middle of Asia Minor, and the sky was roiling with noise and light.

I was shaking like an understudy who’d forgotten the lyrics.

Taking stock of the situation (dire), sorting through the options (limited), I felt panic dancing in my balcony. Before that moment, my greatest stressors had been adjusting to life in a dusty village, living next door to a donkey, learning to eat drink salted yogurt, and attempting to communicate without verbs. All of that seemed like ice cream at intermission, however, compared to the fast-moving blackness that hung over my solitary figure, threatening genuine danger.

Exposed and alone, I stifled a scream as a bolt of lightning burst from the clouds and connected with the dirt fifty feet away. Fear-driven clarity entered my mind. No one knew where I was. No one was coming to “save” me. No one and nothing on earth was going to fix this for me.

Quite unintentionally, I had been cast as the star of a one-woman show. Quickly, I decided that crouching down and balancing on the balls of my feet felt too passive, too much like allowing the scene to unfold rather than being an active player in it. Despite the cautionary voice in my head telling me to hunker down in the open until the worst had passed, I threw my shoulders back, inhaled from my diaphragm, and took charge of my fate.

Feigning confidence as lightning continued to stab down from the clouds, I ran well for the first few minutes. Even though my glasses were being pelted by raindrops, I could still find the trail. Minutes later, however, my vision blurred into nothingness. The raindrops hardened into stinging. My mood slid into alarm. My pace slowed. There wasn’t a jazz hand or high kick in sight.

A complete inability to see where I was going; a tragic sense of direction; clothes completely sopped; trails that had turned into rushing creeks; impulsive shrieking whenever lightning zapped around me; and a sky that had turned so dark that visibility was nil—all of these realities synergized into a single thought: “Keep moving.”

With less than an hour until dark, I hacked my way around dead-end trails and decided to believe that if I just kept trying, eventually I’d find my way back to something familiar.

However. The lightning was truly on top of me, and that created a danger bigger than dark. More than anything, I needed to find shelter.

In an irony so sharp it could have been scripted, I discovered that, in a region with thousands of abandoned pigeon alcoves, cave homes, lemon caves, and early Christian churches, I couldn’t find a single carved-out opening. If I could find the trail back to my starting point, it would take me only a few minutes to get to the ancient, crumbling monastery—an idea that roused my waning dramaturge and caused her to muse, “What a lark! Then you could tell people that you once sought shelter in a monastery!”

Just as I convinced myself that dogged diligence would see me through, the Great Director in the Sky decided to kick up a frigid wind.

On the positive side, the onset of shivering meant being lost suddenly dropped much lower on my list of worries. Completely soaked and well into the second hour of running, I imagined my children introducing themselves to their future in-laws with a fraught summary of youthful tragedy: “My mother was killed by a freak intersection of lightning strike and hypothermia one day when she got lost in a wild valley in Turkey.”

Naturally, states of heightened dramatic tension always break, and it apparently wasn’t time for my grand finale just yet. The orchestra in my heart swelled as—trumpet fanfare!–the sky magically lightened, and the storm blew past, leaving behind only a gentle, steady rain.

I smeared my glasses “dry,” and after five more false starts, I finally happened upon the road leading towards the monastery. Soaked to the marrow, but with a song in my heart, I trotted the last fifteen minutes home, down the main street of the village. Each step squished loudly. My hair dripped rivulets down my torso. My pants refused to stay up, due to the weight of the water pulling them down. My shirt clung to my torso, providing show-stopping burlesque for onlookers accustomed to body-obscuring, layered clothing.

I’ve never before had a more rapt audience than I did on that long stretch from the monastery to the village square. At one point, near the taxi stand, I stopped and took a bow for three men who couldn’t believe the soggy apparition that had emerged from the raindrops. Had one of them not finally blinked, I would have been forced to burst into the chorus of “Sunrise, Sunset” to snap them out of their reverie.

By the time I made my way through the center of the village, the square was Standing Room Only. As had been the case for the previous two hours, I pointed my eyes to the ground and just kept moving…albeit with one hand holding up my sagging pants.

One foot. Then the other.

Nearing home, I considered the power generated from placing one foot in front of the other. Pushing back against fear, carrying on in the face of uncertainty, and moving forward blindly had brought me out of the storm; months before, these same abilities had given me the gumption to pack up my life and plunk it down 7,000 miles from home, in the midst of fairy chimneys, headscarves, and The Call to Prayer.

A grin spread across my drenched face, and my free hand rose and pointed to the still-clearing sky. Fingers splayed wide, palm pulsing, I saluted the clouds with a triumphant jazz hand of joy.