About 12 hours after my previous post, I was ready to write.  In fact, I’d deliberated about the topic of Turkish Men long enough that I’d broken my somewhat-cooled feelings into three representational stories, each of which would cover a different facet of my frustration.

Right about then, as I started hopscotching around possible names for these three posts in much the fashion of a moth that’s been tippling in the Jameson’s attempting to find purchase on an Itty Bitty Book Light,

a new thing arose, and this thing is called The Tension Between Living Real Life and Chronicling That Real Life in Cyberspace. Indeed, quite when I was all jetted up and ready to divagate about Turkish men’s mustaches passing for eggplants and their body odor on crowded buses sending me reeling to my pomander (note to self:  replace cloves),

I found, day after day, I didn’t have time to devote to a proper litany of my annoyances.

The fullness of my recent days isn’t all that arresting, really, but it’s stuff nevertheless:

–I’ve been teaching a couple of summer classes, online, and so any time I have an hour at the computer, priority dictates that I check in there and do some grading and replying;

–We’ve been trying to wring the last drops of Wow from our time in Turkey (we will be on the plane home in just under a month and feel, already, that there’s too much we haven’t seen or done), which means that a week ago we rented a car and spent two days visiting the ancient capital of the Hittite civilization (full post can be read here:  www.layingfallow.com/turkeyblog).  Then, yesterday, we flew to Turkey’s third largest city, Izmir, so that we could drop off our Girl at the international NASA space camp.  With her being at camp for six days, Paco, Groom and I are renting an apartment (to get a sense of how Turkey works, try this out:  our friend Christina, who lived in Cappadocia when we first came, was giving Thai massage lessons to a doctor named Deniz; Deniz has recently grabbed a boyfriend named Basar; we are staying here in Izmir at Basar’s aunt’s house; she is out of town, but her 18-year-old son met us at the airport and spent the entire afternoon then helping us get Girl to camp and teaching us the train and Metro systems in the city, not to mention showing us how to turn on the water heater for the shower in his mom’s apartment).  We have the week here in Izmir to explore–incidentally, Izmir used to be called Smyrna–and to greet our friend Kirsten when she arrives Friday for her Big Turkey Visit.  With Kirsten, we’ll pick up Girl on Saturday from camp, and then we’ll all bus it down to the city of Kusadasi (where cruise ships disgorge bloated passengers looking to buy leather goods) for three nights; the city will serve as a base for us to play at Europe’s largest waterpark and, another day, to trip down to the ruins at Ephesus.  After that, we’ll all fly to Istanbul to sightsee with Kirsten for two days before we jet back to Cappadocia and introduce Kirsten to the donkeys in the ‘hood.

In short, I’m nowhere near done with Turkish men (and the women who leave them placidly sipping their tea), but right now, I’m sufficiently wound up with mentally processing the Hittites, agogging at the sunsets over the Aegean, and trying to figure out the bus routes to the Izmir Starbucks.

At this rate, I’ll be completely free of lather about Turkish men when I finally sit down to rant.  Instead of focusing my attention on dissecting the deeply-socialized pathology of an entire gender, I’ll probably just announce that Groom and I are packing a lad named Mehmet in a duffel bag to Duluth, and once he’s successfully secreted through customs, we’ll plant him in our mint patch as Northern Minnesota’s hairiest garden gnome.

Until then, gander at these recent glimpses, woncha?

First, we have Girl and Jocelyn at the Lions’ Gate in Hattusas (the Hittite capital): 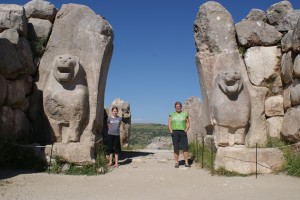 Then there’s the Aegean. And that amazing burning circle in the sky. 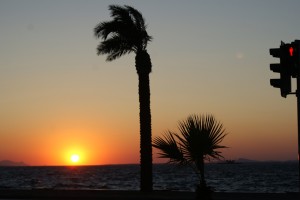 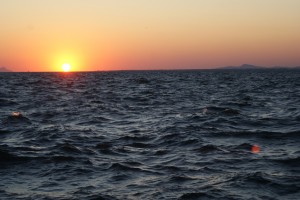