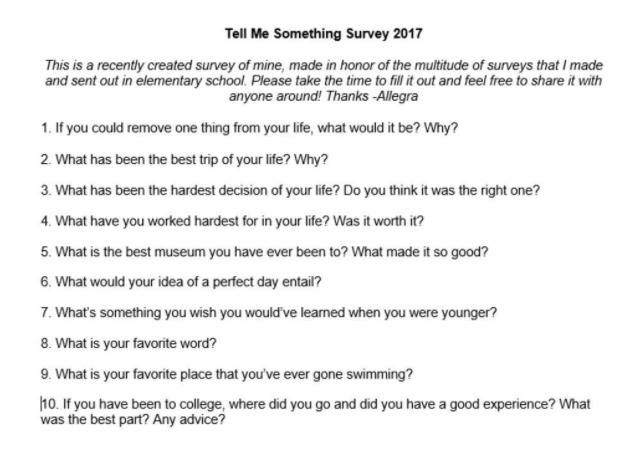 Here are the responses of my beloved friend, Elly (check her out at her blog Buggin’ Word):

1 – The word “should.” It’s a dangerous word. When I think of everything I “should” do, I feel overwhelmed. What a subjective word, too. I’m trying to think more about what I “could” do instead.
2 – My brothers, their partners, and my parents travelled to an all-inclusive resort in Mexico when I was in my early 20s. There was some horrible mistake on the part of the resort so they bumped us up to the luxury side of the resort – everything was gorgeous and clean. )I was living in a horrible apartment in Hell’s Kitchen at the time and often found used crack vials on my fire escape.) No one was responsible for cooking. No one was responsible for planning. No one was responsible for exploding plumbing. Everyone – even my parents – were still young and healthy. We climbed ruins and shot tequila and rode giant inflatable bananas and chased lizards…together. I don’t think I’ve ever felt closer to my family.
3 – Deciding to become a mother. Was it the right one? Maybe. Probably. I mean, if given the option I wouldn’t go back and undo it. But I also know I would have had an interesting and fulfilling life had I not become one, too.
4 – Recovering from the treatment for cancer. Not the treatment itself. Though that sucked, too. Learning how to live again despite the fear. And letting go of what might have been.
5 – There was a tiny historical museum in the town where I grew up – Greensboro, NC. It smelled right. And you could walk from building to building – small farm type buildings. But yet there was an art museum attached, too.
6 – Waking rested. A cup of coffee on a screened-in porch with my ukulele and an open agenda. A walk. Somewhere beautiful – woods, a beach, a park. A warm meal. A cold drink. Laughing so hard and suddenly that it makes my throat raw. The sound of cicadas. A breeze cool enough to sleep with the windows open.
7 – My own resilience.
8 – Texture.
9 – Smith Mountain Lake, VA.
10 – Guilford College, NC. Yes. Amazing. And horrible. At least initially. I didn’t adjust well. But eventually I found my way. It’s where I found my love of the music industry, my activism legs, and my writing ability.
—————————————————-
And our “second-mama”-level friend, Elaine/Ileyn, she who made our year in Turkey so much easier and who now lives in Istanbul with her husband and two amazing kids, told Allegra:

1) If I could remove one thing from my life, it would be the feeling of never having enough time in a day.  That feeling in and of itself causes me unnecessary stress.

2) The best trip of my life was the one that I took when I was in college with my then boyfriend at the time (Selin’s Dad).  We went to the Bahamas and it was magical and fun.

3) The hardest decision of my life was deciding to remain in Turkey after I got divorced when I was 26 years old.  I think it was the right one as Selin was able to see her dad and his family.  I also enjoy living and working in Turkey.

4) I have worked hardest in life to keep positive and logical even when everything else was chaos around me.

5) The best museum that I have ever been to is the Children’s Museum in Pittsburgh.  They have wonderful and very creative exhibits for all ages.

6) My perfect day would entail waking up at 9:00am and having a ready made picnic basket of all my favorite foods waiting for me in the kitchen.  All of my family and friends would go to the beach and have a wonderful day swimming and having fun.

7)  I wish that I would have learned how to speak fluent Italian when I was younger.

8) My favorite word is booty as in baby booty.  I like the way is feels as it passes over my lips.

9) My favorite place that I have ever gone swimming is the Bahamas.

10) I went to Edinboro University of Pennsylvania and got my B.S. in Elementary Education. I had a great experience and my favorite part was the friends that I made there.  My advice is to pick a school that suits your needs and concentrates on the major that you want to be in.  I think paying in-state tuition is a great idea for undergraduate education.  Out-of-state is not only usually more expensive, but the logistics of going home and bringing things back are harder.