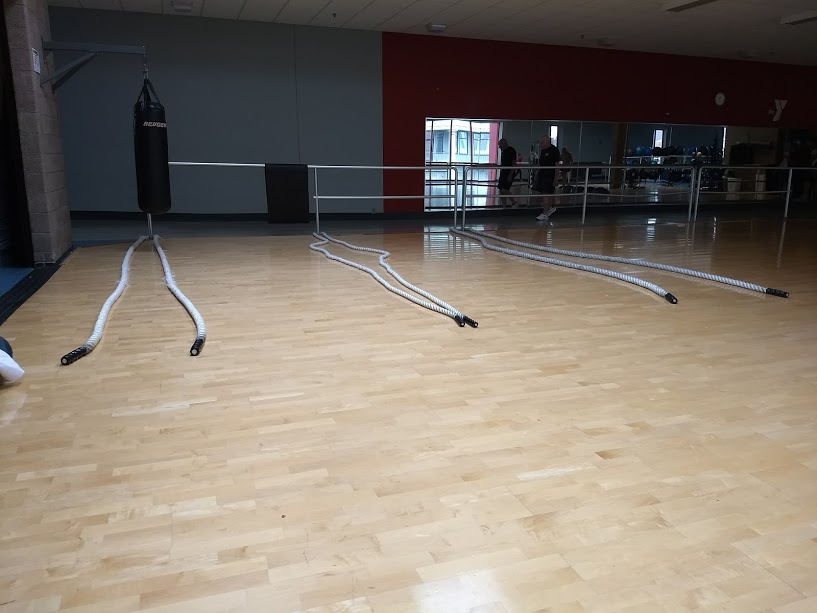 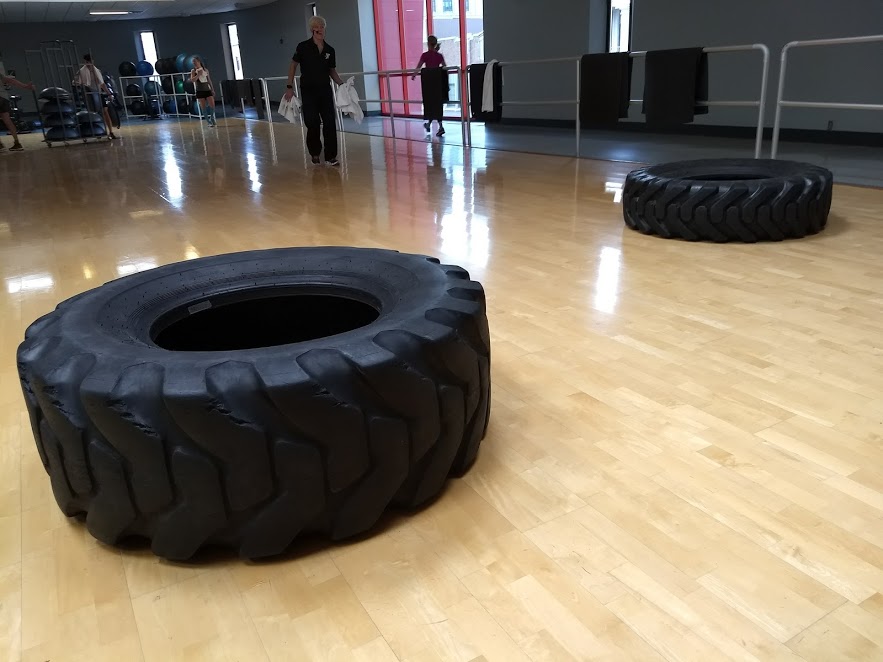 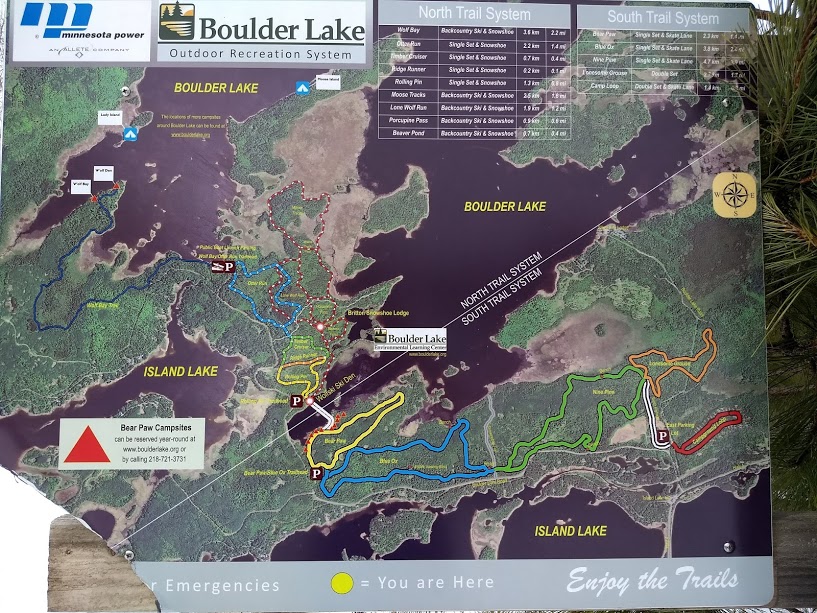 February is known for leading with blah.

Here in the Northwoods of the American Midwest, February can create a strangled scream in inhabitants who attempt perkiness. “Well now. We’ve had quite a winter this year, haven’t we, with a seriously snowy December, historic Polar Vortexian cold, and seven days of school closures so far?” Just as we’re bucking ourselves up and attempting to bend our frozen arms into something like a pat on the back, we look at the calendar. So it’s February. And last year our snowiest month–the one with the most school closures–was April. People were still skiing in May.

That means, if it’s February, we’re about halfway done with winter.

It doesn’t help that the extreme cold has kept new snow from falling, and for those of us who are winter lovers, new snow is cause for joy. Sadly, we’ve had a whole lotta joy-free shivers.

Without an occasional prettifying layer of new snow, the world gets ugly.

In particular, the world of cars gets ugly. 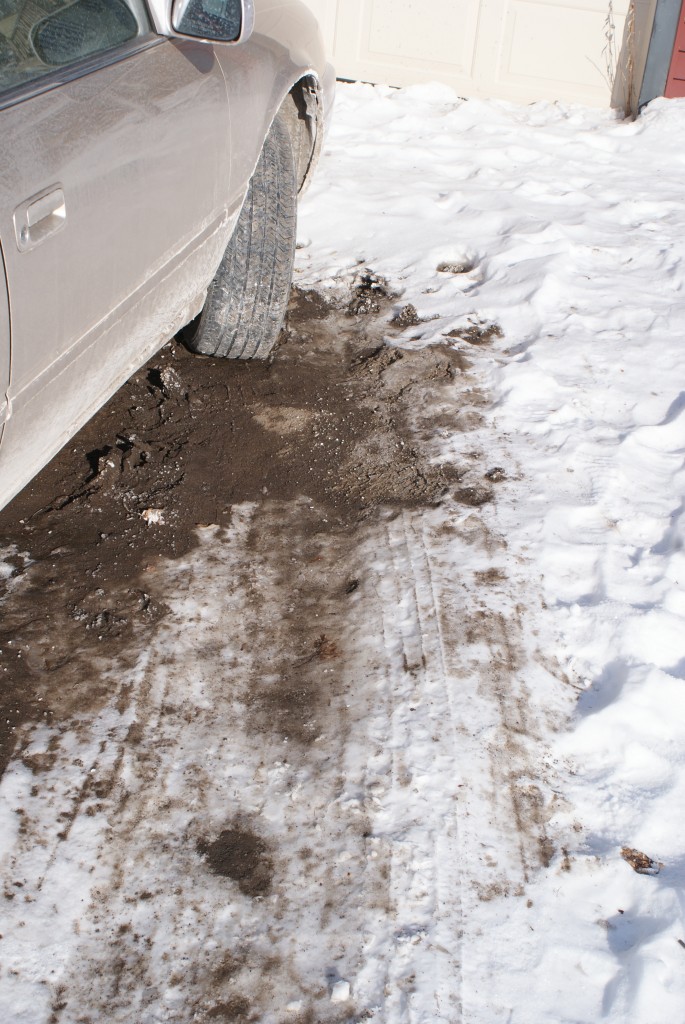 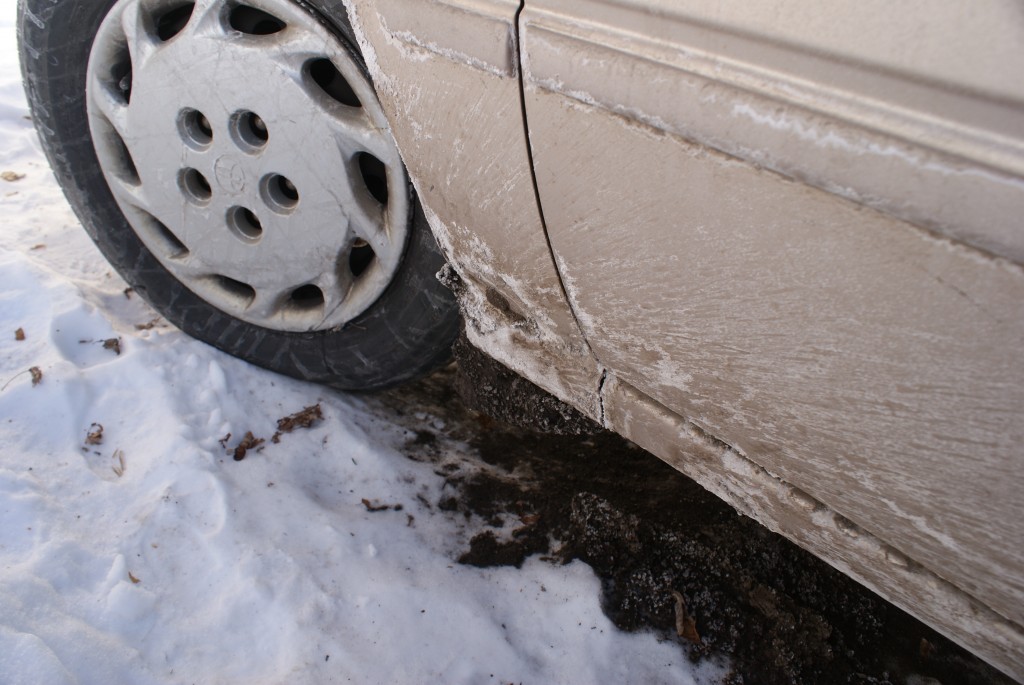 The salt and chemicals used to treat the roads coat everything.

Then there’s the fact that our big black plastic composting bins are not only frozen shut; they’re also buried in snow. So we’ve been dumping our compost sort of on top of/next to the buried bins.

We help the neighbors feel better about their own lives. 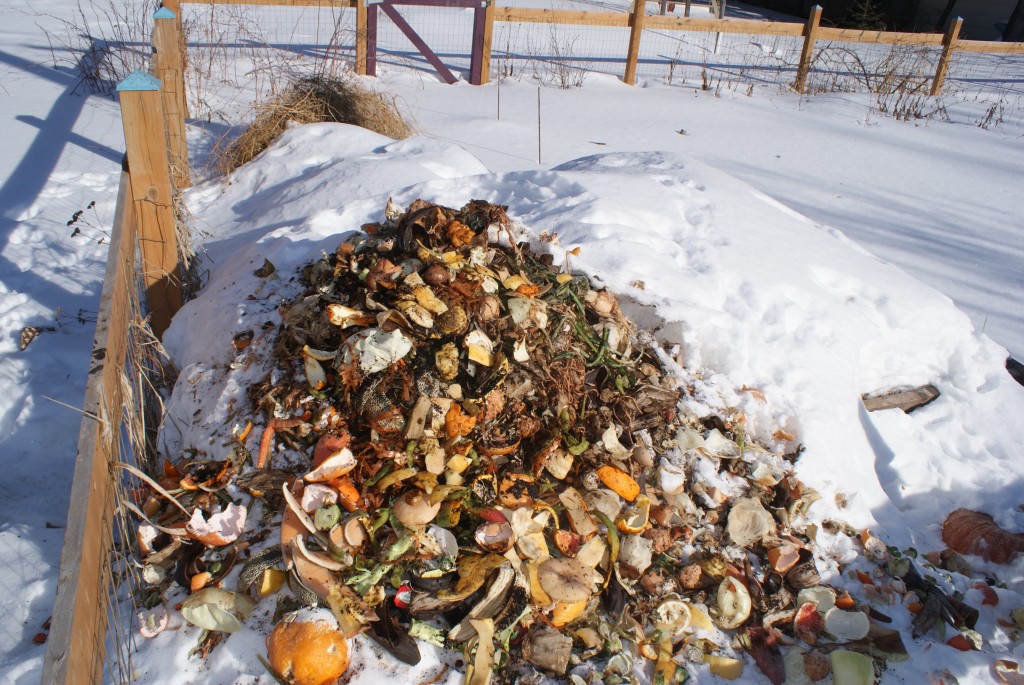 On the other hand, I would argue that compost is strangely appealing, visually. I’d do this jigsaw puzzle. 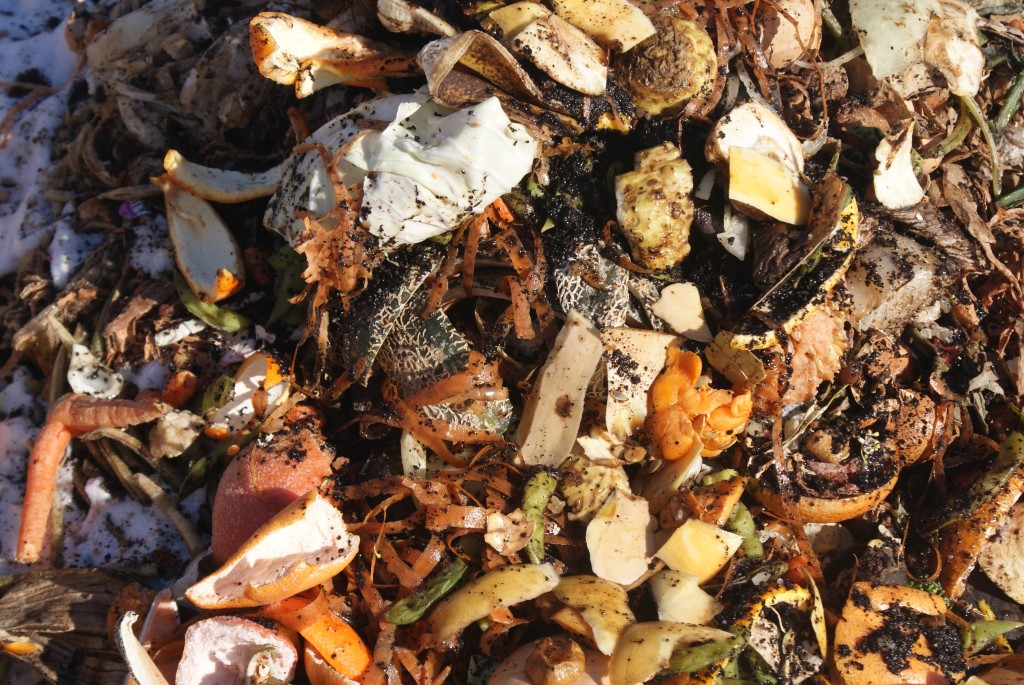 Queer fascination with compost aside, I can also admit it’s public rot.

Fortunately, all the windows are iced over, which turns the house into a cocoon, a place where we can ignore everything outside the walls. 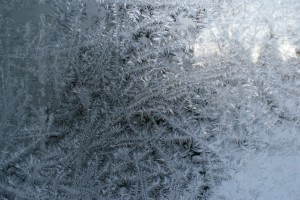 While there are benefits to the cocoon, it also means no one will know if one day I glance at my husband’s ear lobes and think they look like delicious hors d’oeuvres. No one will know if we start eating each other.

That’s February for you: the month when you decide your middle schooler’s haunch might fit in the slow cooker.

February…and January…and December…have also been gorgeous. Winter is gorgeous, especially when machines are kept away from it. Complaining about the cold gets really boring really fast, especially when one has central heating, a stash of teabags, and heaps of clothes–not to mention the ability to wear them in layers.

As with everything else in life, the key to finding pleasure is to engage. Truly, I wouldn’t mind if my headstone one day reads, “She didn’t understand electrical wiring, but damn if she didn’t get out there and give everything else a try.”

Indeed, I’m all for children and adults alike taking on winter with an attitude of gusto. Sitting and griping is, at best, self perpetuating. But putting on four layers and rolling down a hill and getting a snootful of snow is damn fun.

So is going out into the woods with friends and cutting down your own Christmas tree. 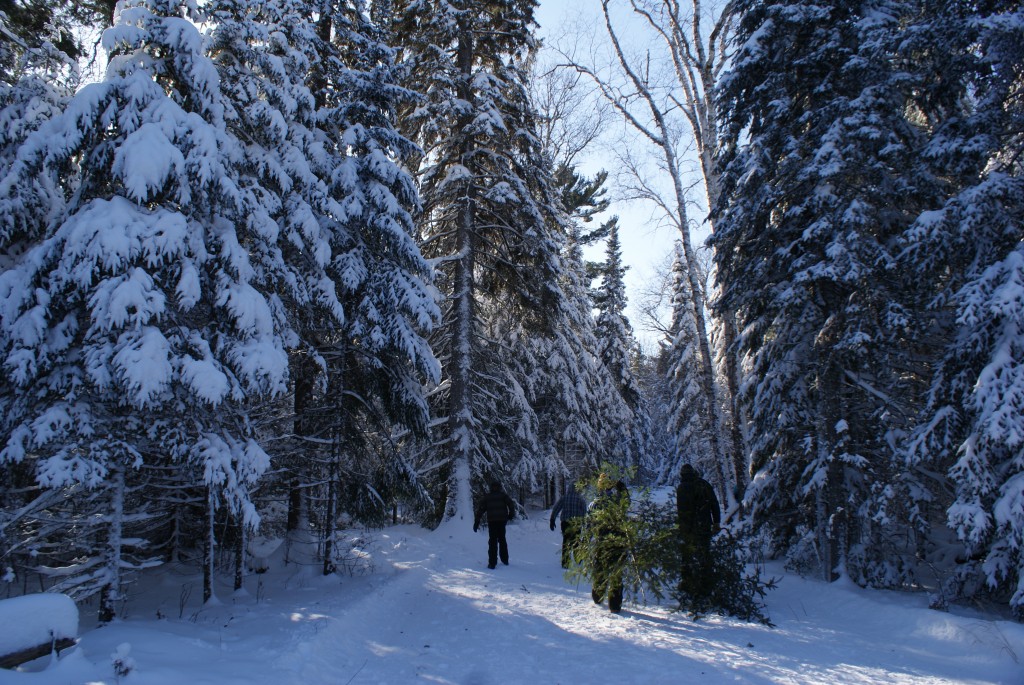 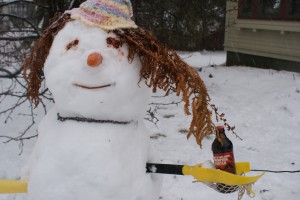 Also glorious in the winter are Lake Superior and Duluth’s Lift Bridge as steam ghosts dance around them. 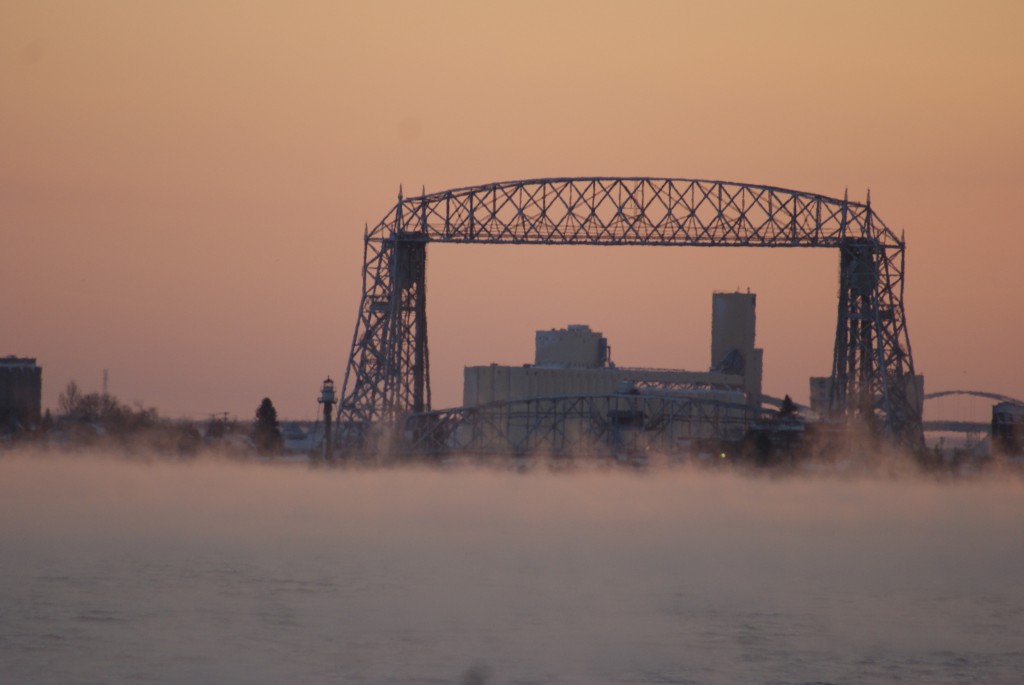 Few things are more delightful than putting on snowshoes with a crew of pals and careening through powder down the side of a steep hill. 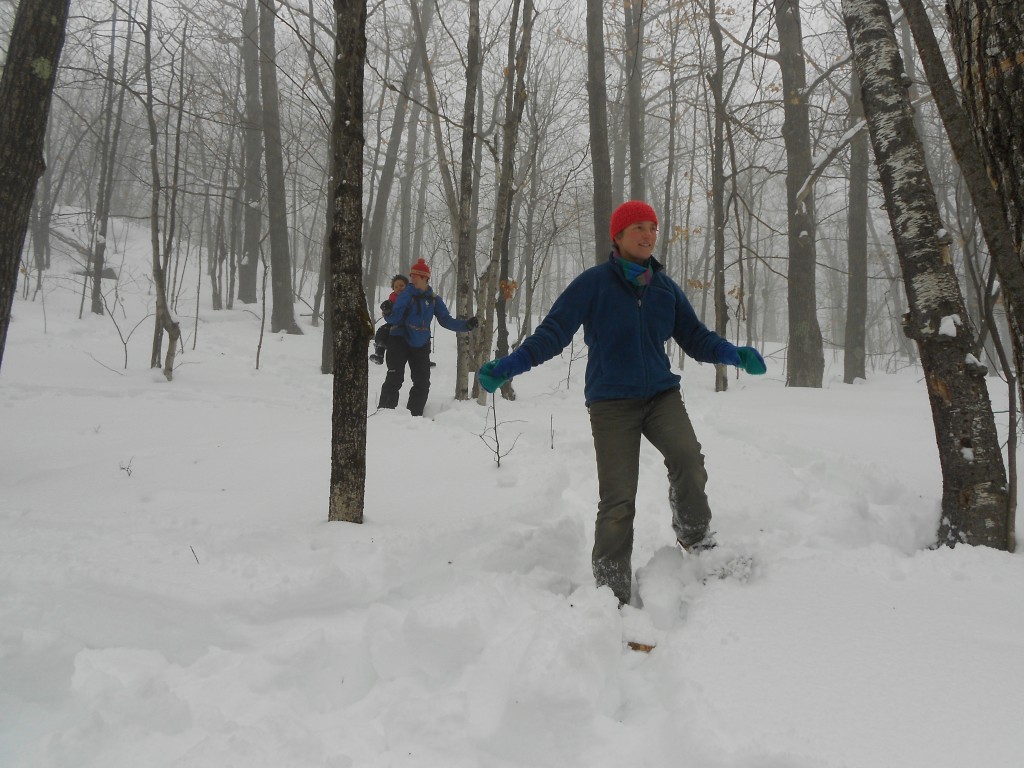 Then there’s the sledding. A good “wheeeeee!” definitely clears the passages. 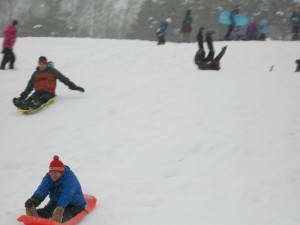 In this video, Paco (aka “Panda Man”) and I whizz down the hill with three-year-old Aliya. That girl was born to compete in skeleton, I tell you. Allegra comes down after us, as a nice piece of punctuation.

What’s more, there are few better ways to spend an afternoon than skiing up a frozen creek tucked in behind Byron’s cute behind. 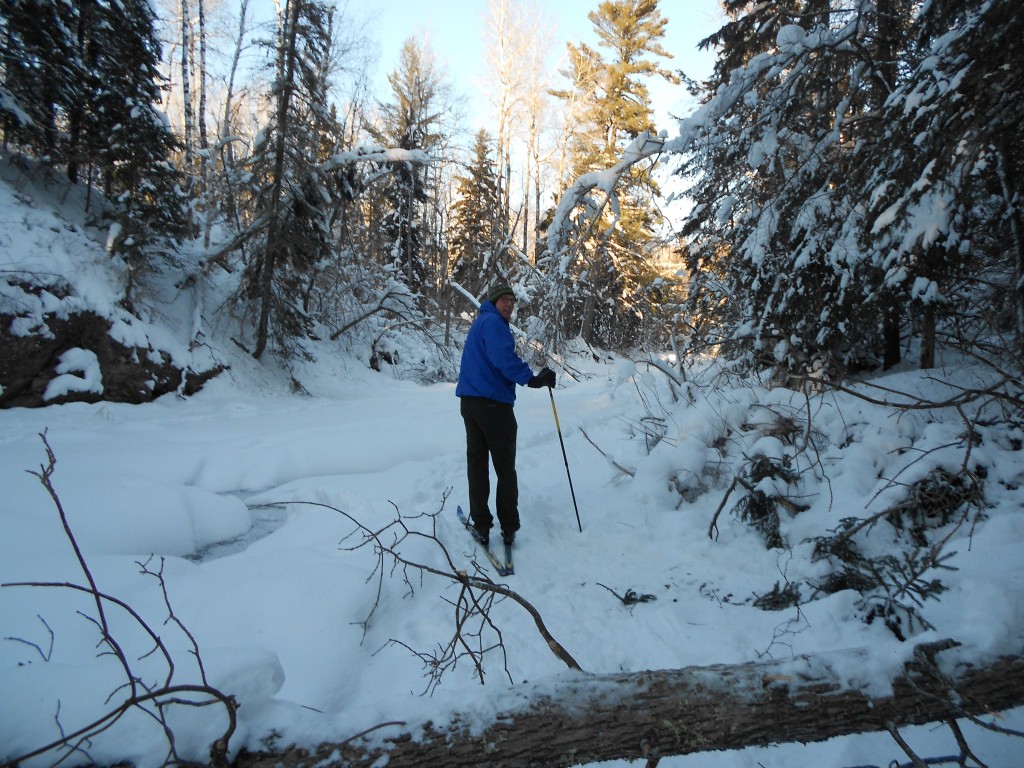 Sometimes, when I’m skiing alone in the woods, a Tomten crosses my path. I have to pretend I don’t see him, lest he scurry away. 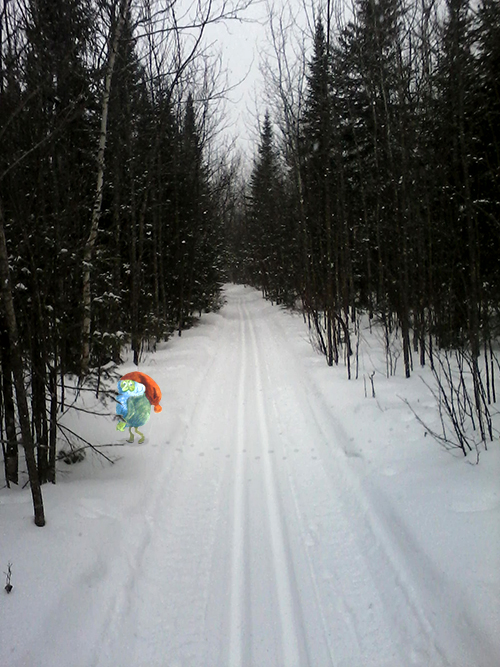 For Paco’s eleventh birthday, we went to the downhill ski area for a tubing party. 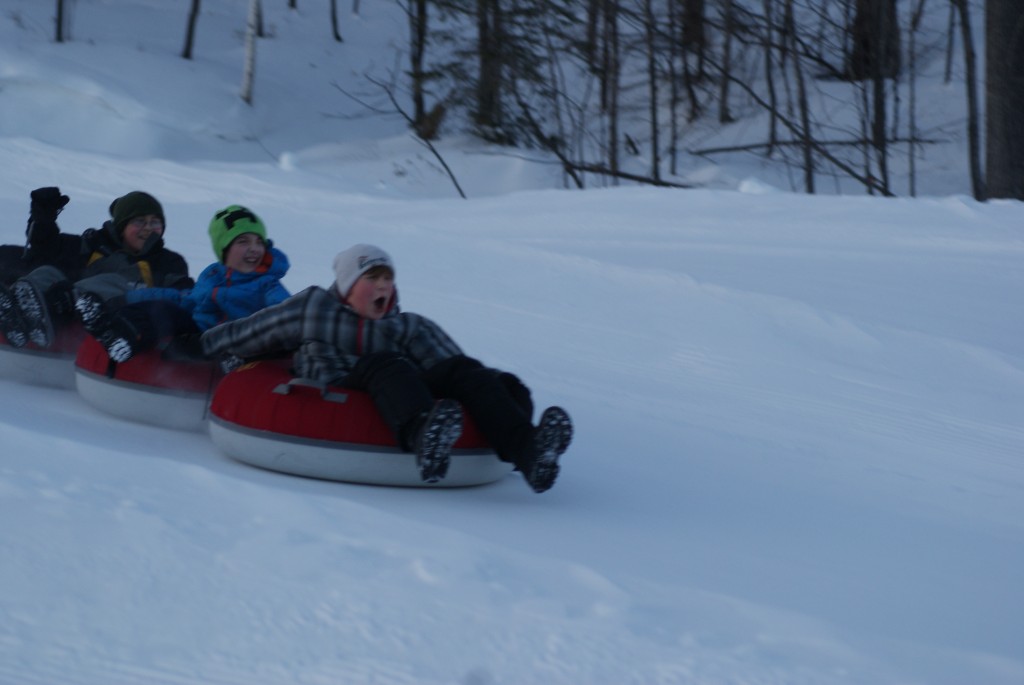 One other great thing about winter? Cute knitted ear bands. 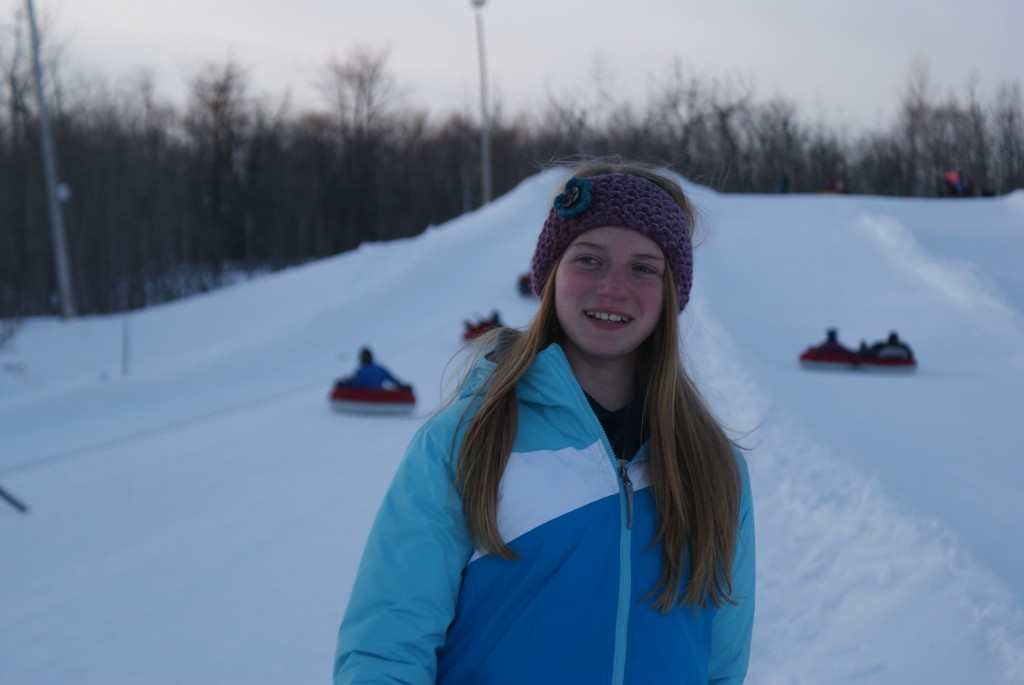 When you’re usually the one behind the camera, a view of the feet is sometimes the best way to capture your own existence. 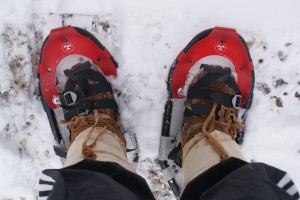 There was enough cold and snow this year to hold the John Beargrease sled dog race (it serves as a warm-up race for the Iditarod for many mushers). Although we were frozen stiff by the end, getting out there and seeing all those happy doggies was a pleasure. Plus, Paco got to decimate huge chunks of ice. 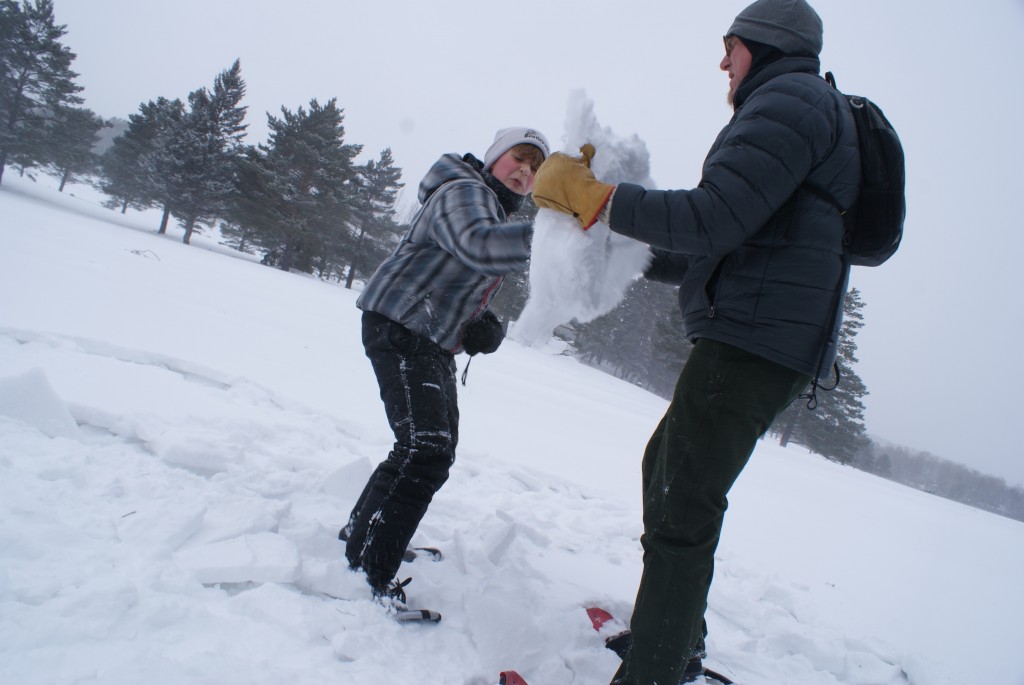 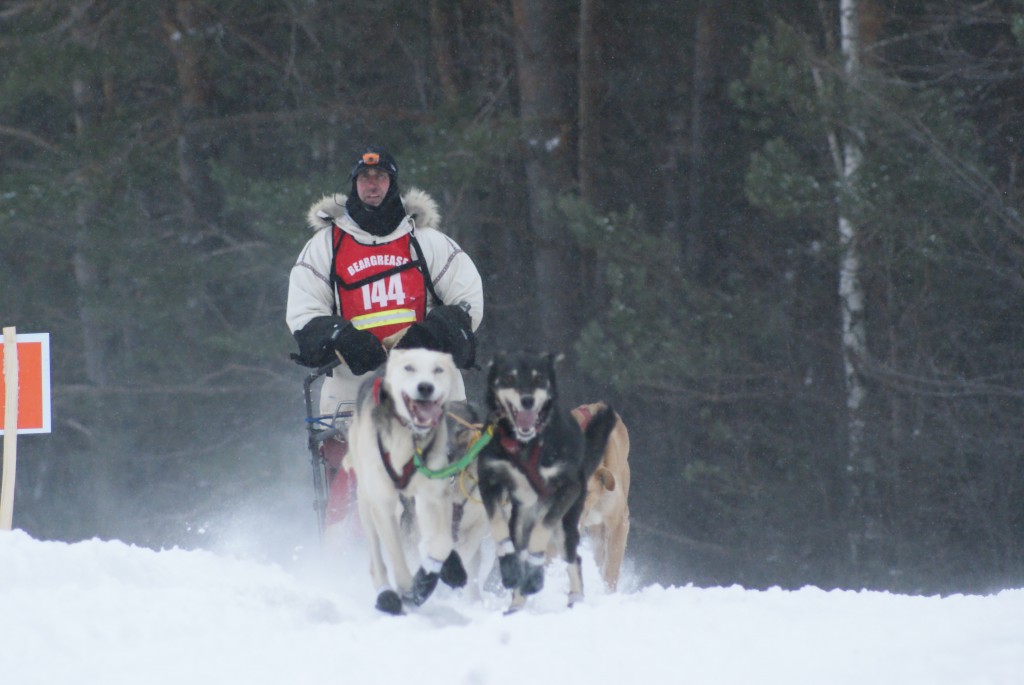 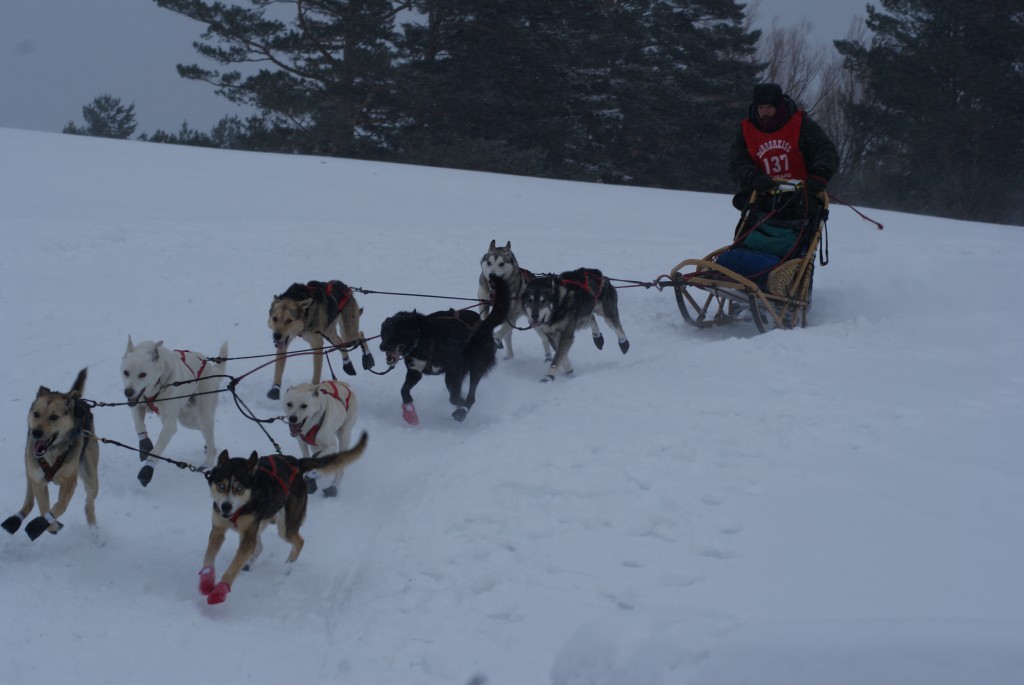 The kids have been doing Sunday afternoon ski sessions, too. As well, Allegra’s on her middle school ski team–‘tho she has no desire to race and therefore only attends the practices. She’s gotten skate skiing technique mastered this year. Maybe some year she can teach me how. 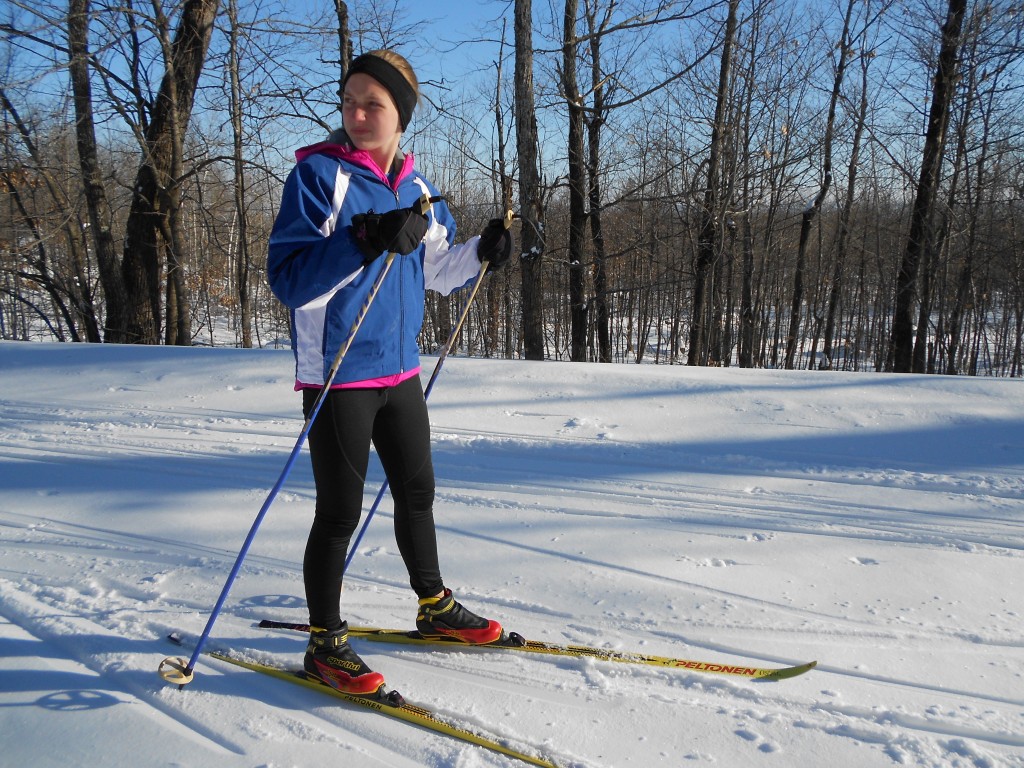 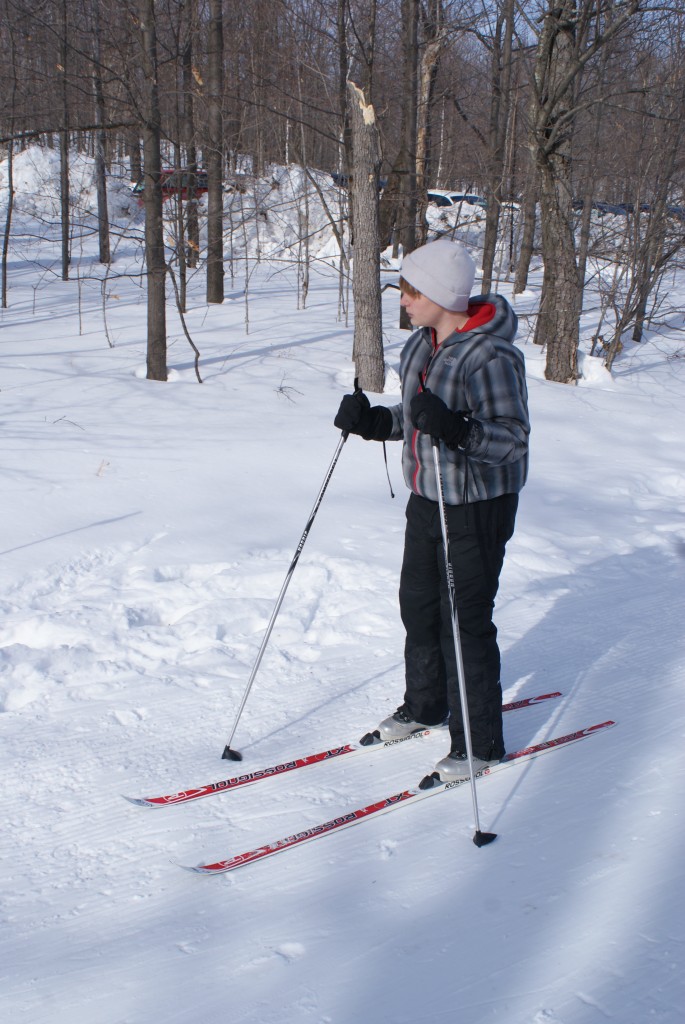 And, finally, there is my very favorite: when the pack ice blows in to shore and breaks up into slabs of beauty. 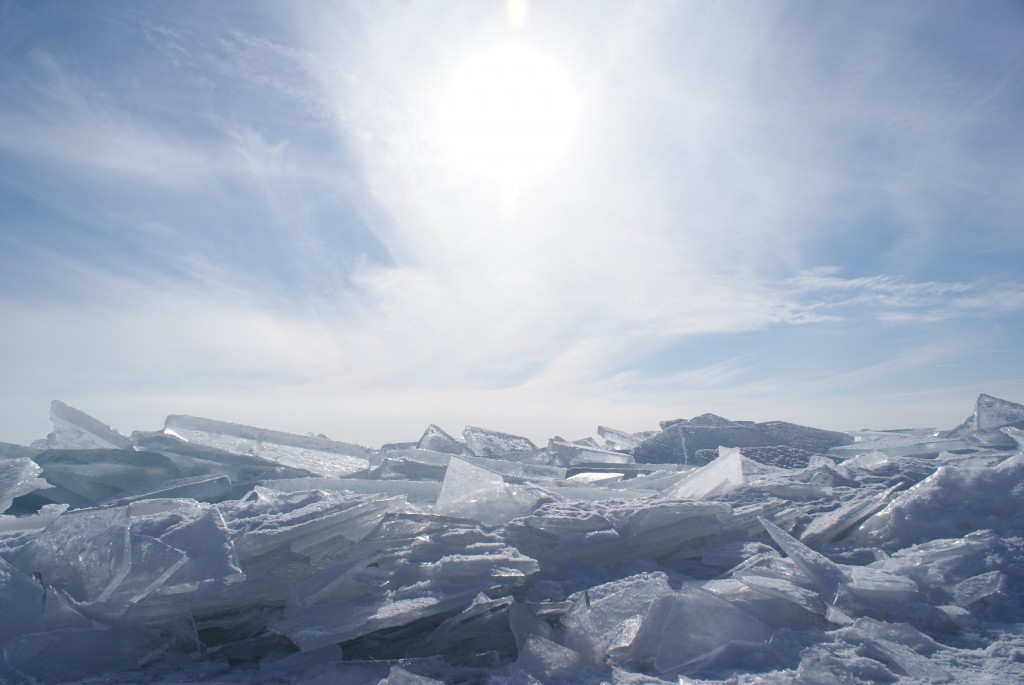 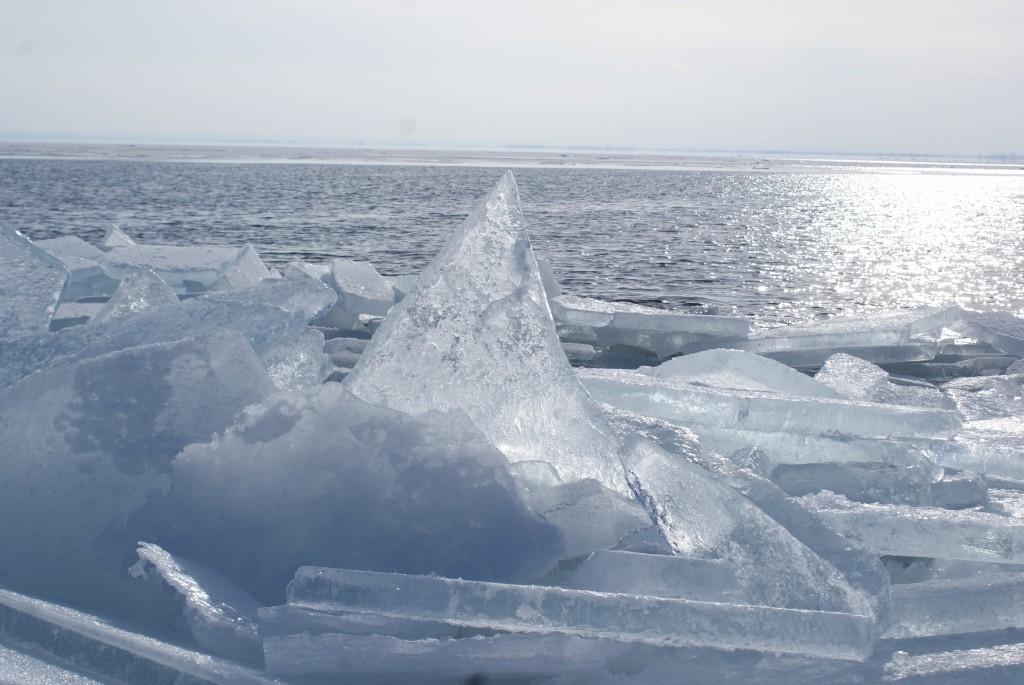 If there has to be February, at least I’m glad we’re having a true winter of it.

How can a soul feel down in the face of this? 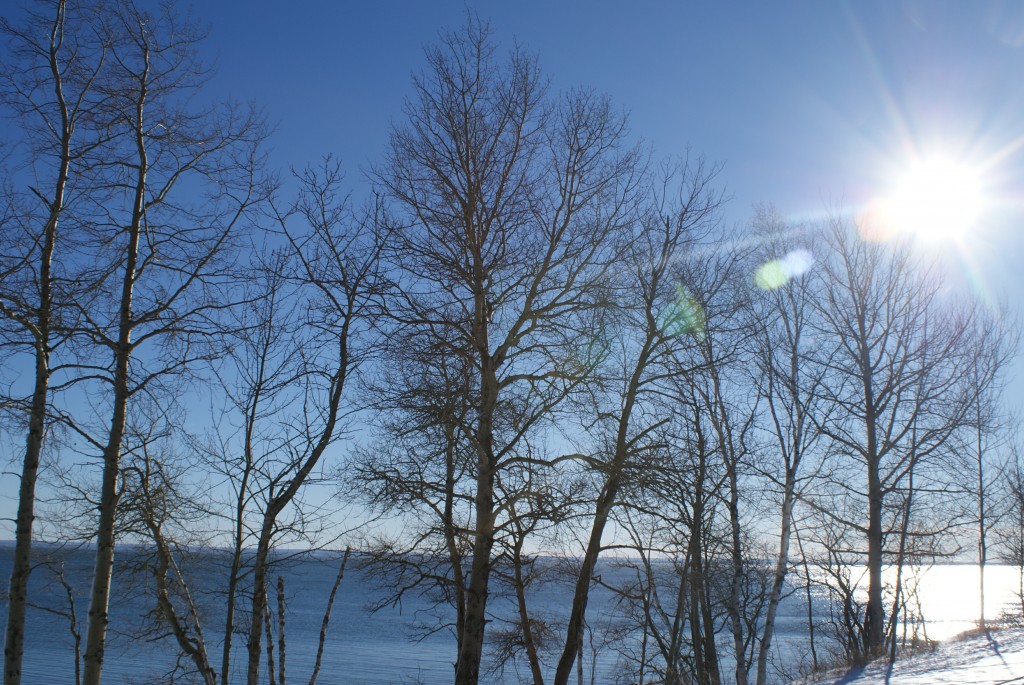 ———————–
The kids are off from school this next week, so we’re planning to head over to visit the Apostle Island ice caves. They can only be visited during years of extreme cold, when the lake has frozen enough to allow visitors to make the mile walk out to them. During the summer months, these caves are visited by kayakers. Guess what my next post will be about?