Twelve Days of Summer with My Twelve-Year-Old: DAY ELEVEN 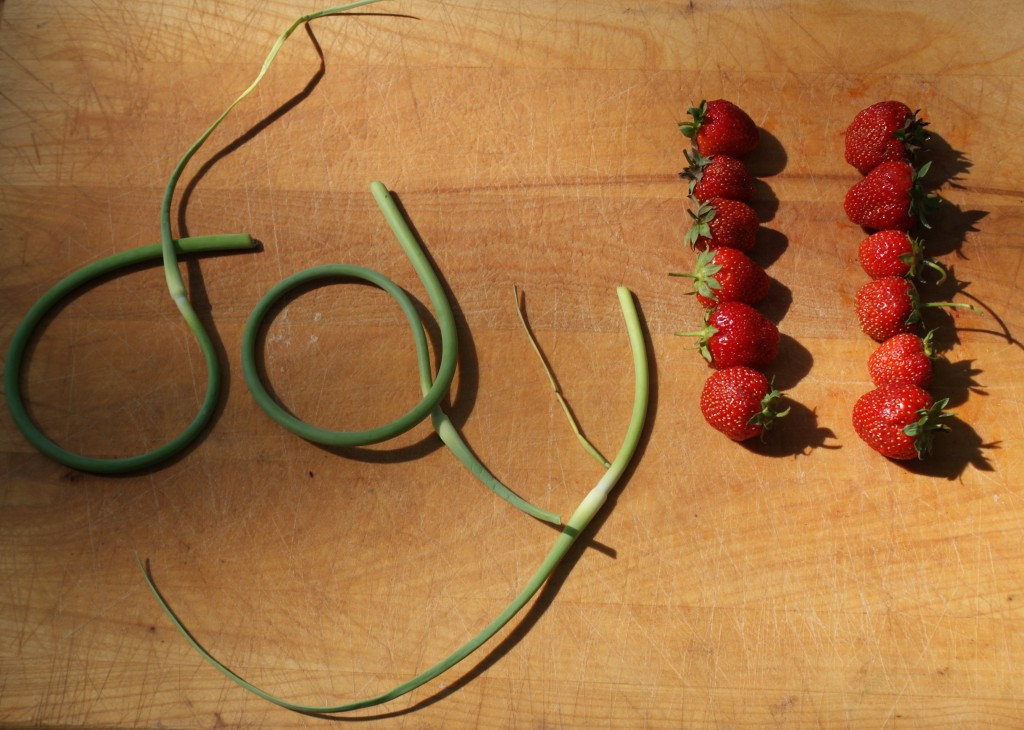 On the eleventh day of summer(mas), my middle schooler gave to me: eleven piped positives

From the start, Allegra was crazy about her little brother. 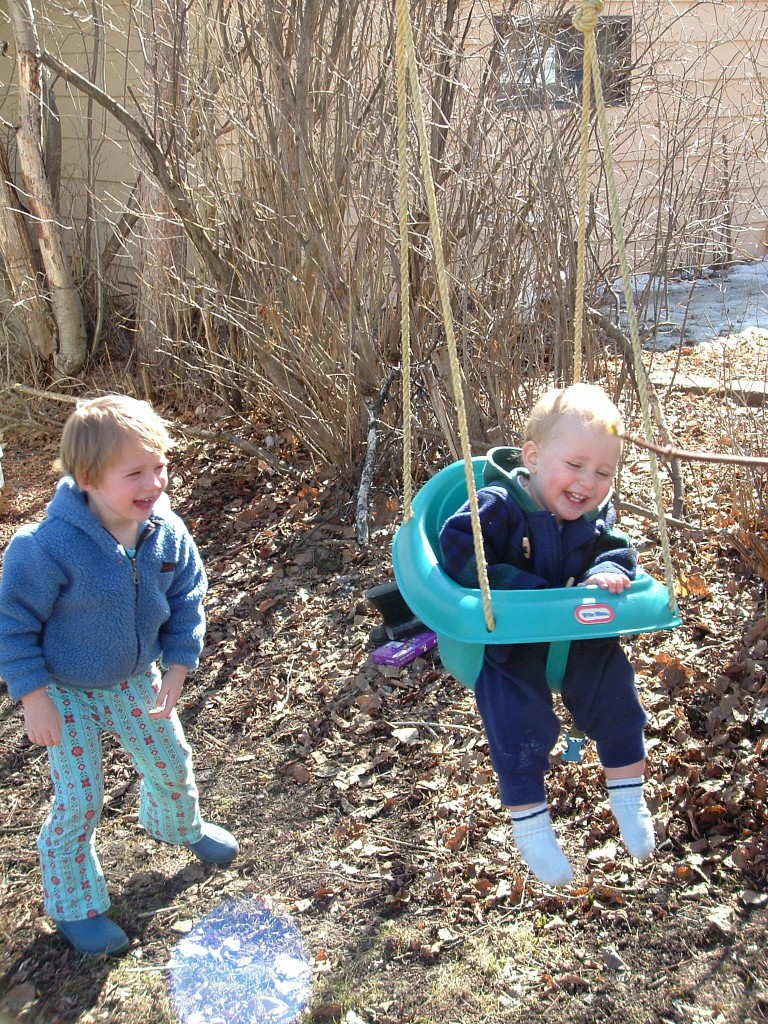 Excited from her soon-to-be-shorn scalp* right down to her slow-healing umbilical hernia, she gloried in having a buddy for life. For “Brudder,” she had endless hugs, tickles, adventures, and concern. In return, he worshiped her, gazing upon her with awe and appreciation, certain she’d hung the moon.

During Paco’s first two years of life, she was the dominant force that shaped him.

All of this happened in his first two years of life. It compounded thereafter, with sister teaching brother about independence, courage, and the pride of achievement.

And now, a decade has passed since those early years. She, the devoted sister, is less obviously so. Developmentally appropriate, she no longer hangs the moon for her brother; instead, she focuses on the axis around which she, herself, spins. However, he, the adoring brother, the little boy in him still resonating, has not changed.

From early days, Allegra was his Sun. By throwing her arm around him and officially dubbing him “one of the animals when I teach animal school,” she created in him the confidence that there was a place for him, that he was wanted, that he belonged. Even more, they established a trust that sustains them. Always, she has shown him what’s to come–has served as the example of his near future.

All of this was evident when Allegra got behind the wheel of a an actual, not plastic, car. She completed the driver’s education course during the first two weeks of summer break, and then she was ready to start putting in some road hours. In my mind, it was essential that her first time behind the wheel be both focused and isolated–just her and a parent.

That’s not how it played out.

With both Byron and Allegra working, the schedules didn’t mesh to have just one of us in the car with her with the other handled Paco-based amusements. Of course, Paco could have stayed home alone, but here’s the rub: he’s had a lifetime of being included. If Allegra was going to try driving, and he either had to be home alone or in the car with us,

he wanted to be an animal in her animal school.

So I asked the new driver how she felt about having “Brudder” in the backseat. It surprised her that I thought she might be bothered. “It’s just Paco! Sure, he should come.”

I should have known that the teacher who used to seat Brudder between two poorly behaved stuffed animals named Crabby Duck and Blabbermouth wouldn’t be fazed by one well-behaved Paco sitting in the back row of her driving debut. She’d long known that the strategic placement of Paco results in peace.

Despite her willingness to take his presence for granted, I also knew the twelve-year-old was enough of an adolescent that he might toss out a few wisecracks as his sister nervously tried to keep a vehicle within the confines of a high school parking lot. Thus, when we headed out that day, I took a quick moment to pull him aside and give him a murmured caution: “The best thing you can do is stay quiet. Allegra’s anxious about the prospect of being in charge of a car while also applying all the book learning she got from the classes, so we don’t want to wind her up. We’re going to stay calm and positive and not react with any dramatic gasps or comments, okay?”

He looked at me like I was crazy. Why would he do anything but support his sister?

Honest to holy, my friends, I sometimes think I can’t write about my kids because they set me up to be one of those smug asshole parents. If it helps at all, I, myself, am profoundly flawed and annoying, so please forgive my children their perfection. In my person, I more than make up for it.

For half an hour, the three of us turned small circles around the high school parking lot near our home. The driver was not, *ahem*, naturally mechanically inclined. Simply turning left at the end of the parking lot entailed fifty words of questioning about how far to crank the wheel and fifty more words to explain the concept of uncranking the wheel to STRAIGHTEN OUT BEFORE GOING OVER THE CURB. 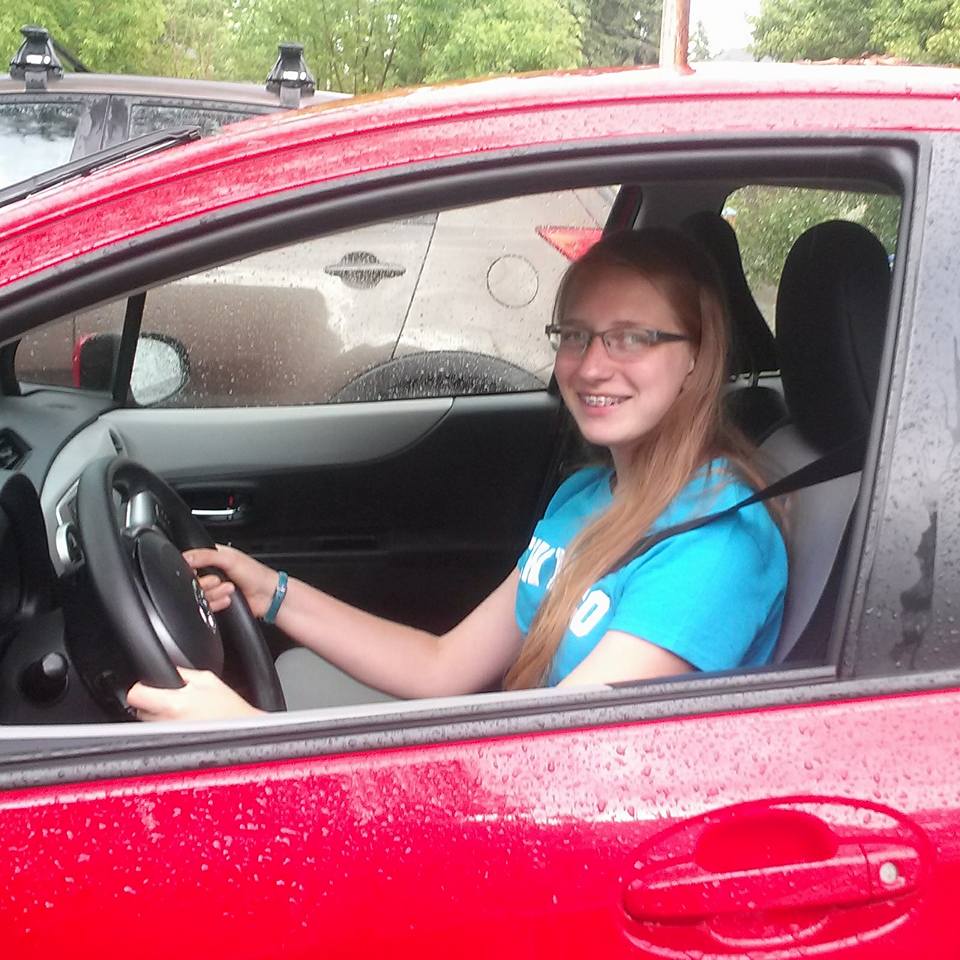 When we got home–with me driving, as the fledgling was not yet ready to face actual traffic, I asked her to hop behind the wheel again and pose, so I could take a picture. While she grinned for the camera, an adolescent voice, unstrapping from the backseat, piped up: “You did a really good job, Allegra!”

His compliment warmed me but hung in the air, unacknowledged. Seems my kids aren’t perfect after all. I chastened her: “Allegra! What do you say?”

“Thanks, Paco. I’m glad you were along.”

Then, being cool, tossing me the keys, she smiled, pleased with her efforts, and headed towards the house.

Despite her casual demeanor, something in the air had shifted.

She tossed her long hair over her shoulder, thwacked her flip-flops against her feet as she walked up the path to the house, swung her hips with a womanly stride,

but at the same time, responding to some deep internal programming, she leaned in to his words. 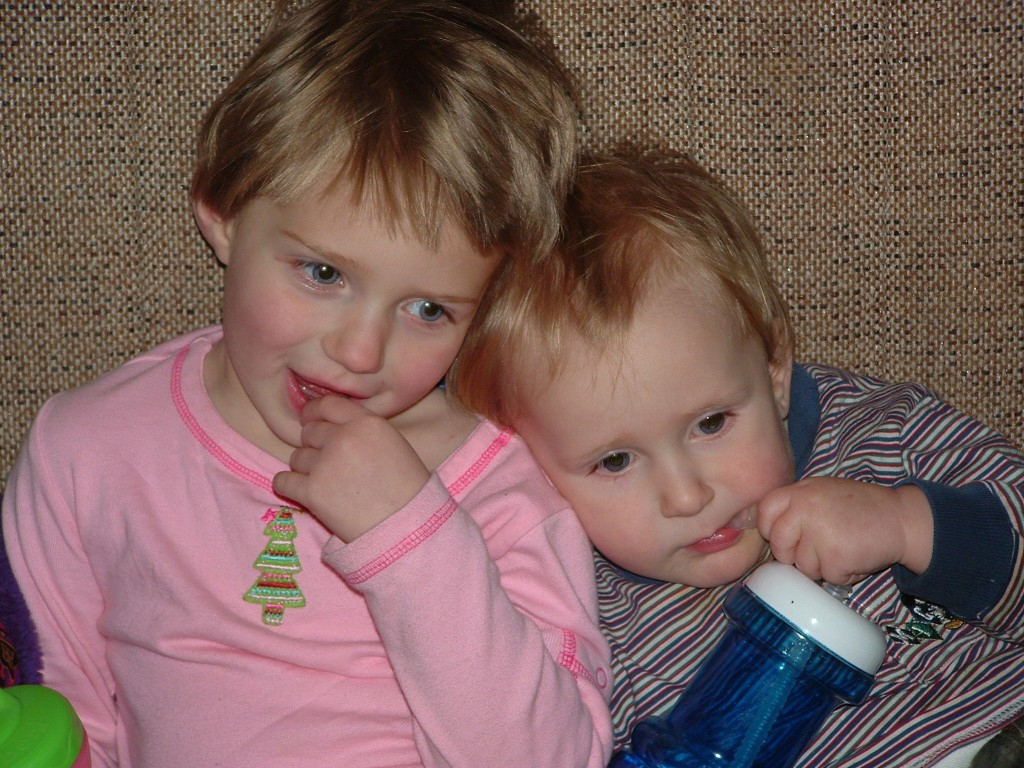 There, then, was a moment for the sister–with the little bugger who was always around–dancing, snuggling, companioning, playing, imagining, listening, loving. That little bugger.

Half an hour earlier, she hadn’t known she’d needed him when she asked, flummoxed, “Where do I put the keys to start this thing?”

–and hadn’t known she’d needed him when she broke into flop sweat and shouted, “I don’t want to go over five miles an hour!”

–and hadn’t known she’d needed him when she squealed, “Am I about to hit that pole?”

–and hadn’t known she’d needed him when she spluttered, “Wait, which one is the brake?”

–and hadn’t known she’d needed him when she mused, ruefully, “I totally missed that parking space, right?”

yet he’d been there the whole time, strapped into the backseat–

thinking she was amazing.

And when he told her so, he taught her:

it’s one thing to be a good driver, but it’s an entirely different gift

to be a good passenger. 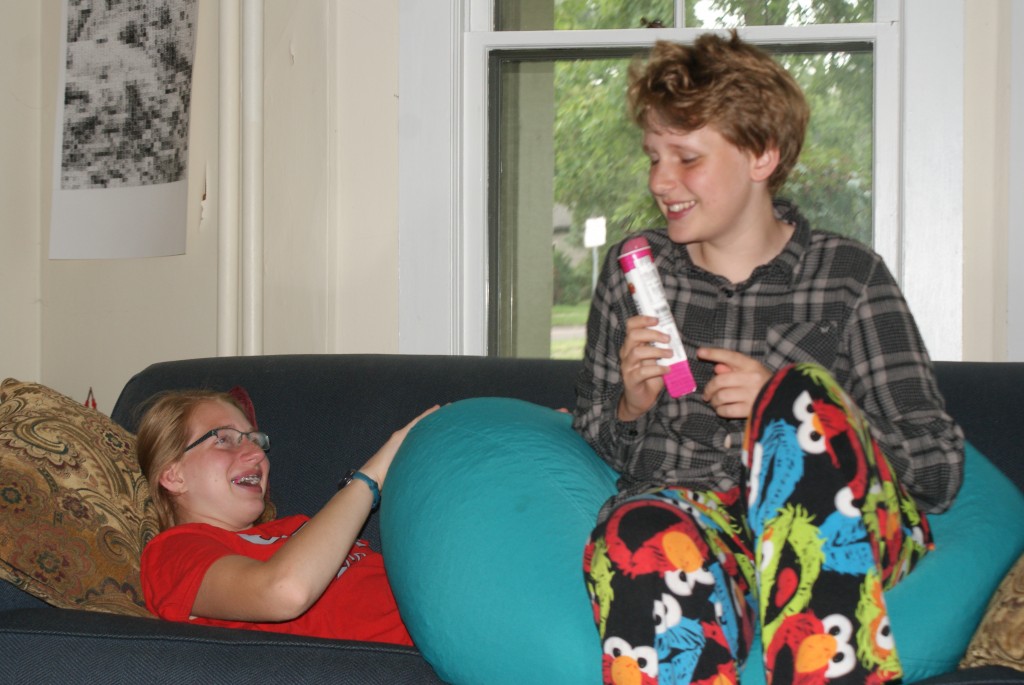 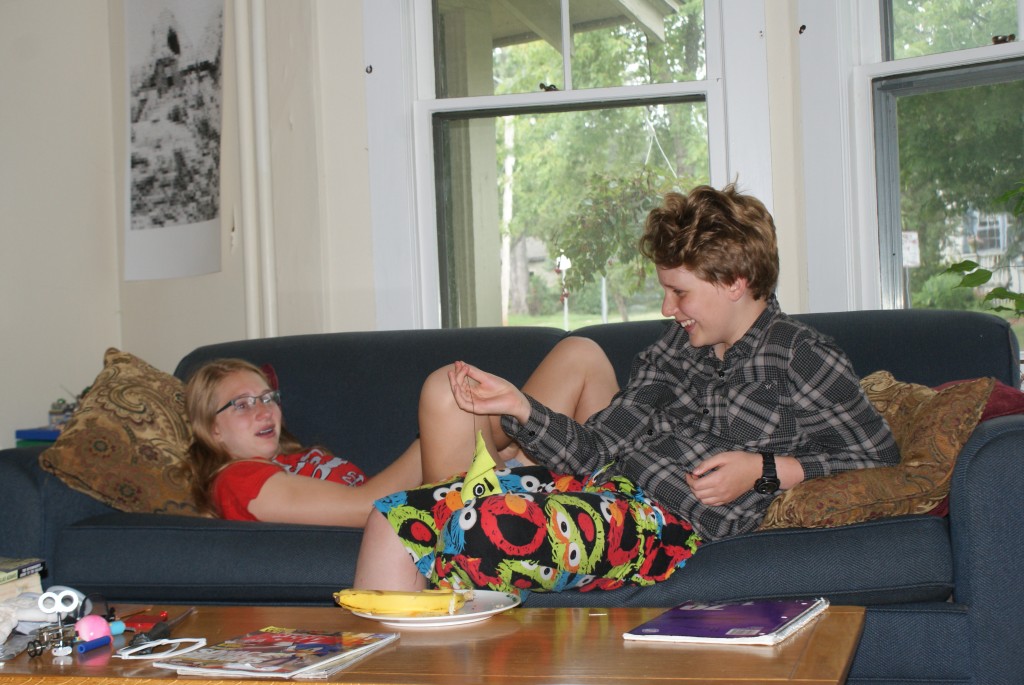 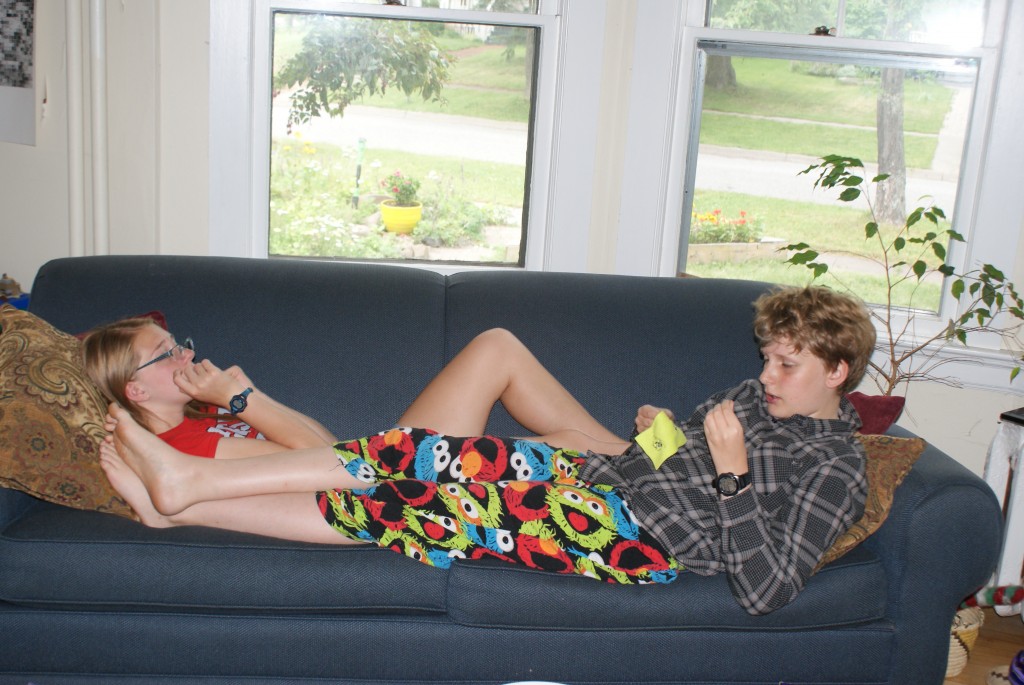 *When Allegra was three, she would throw a fit whenever I’d brush her hair, fighting against my efforts. As a result, I told her, “Either you be nice and let me brush your hair without fuss, or we’re going to cut it really short.”

With nary a beat of pause, she responded, “Then I think you’re going to need to cut it short.”

So we did. Once the shearing–during which she sat happily and quietly–was over, I fancied she looked like a 1970s Romanian gymnast.

4 responses to “Twelve Days of Summer with My Twelve-Year-Old: DAY ELEVEN”