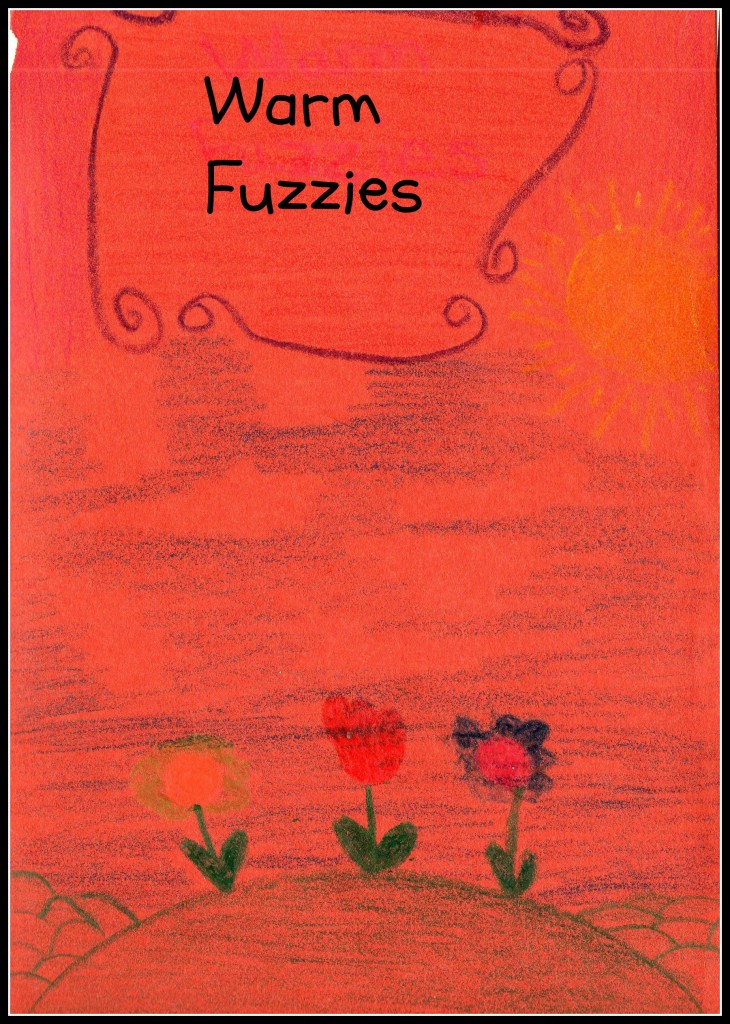 When I was in 4th grade, my class went through a careful, deliberate, rigidly enforced process of loving each other.

Such was the climate in the mid-1970s, an era when feeling groovy was a cultural mandate.

At some point during 4th grade, our teacher, Mrs. Ring, talked to us about the notion that “sharing is love.” In order to express our love for each other, all 25 of us  — a crop of nine-year-olds with disparate home lives, values, interests, personalities, and goals — would unite in love and share our feelings for each other.

To assure that only love was shared and that the sharing felt like love, the class discussed each individual after he/she left the room. On the surface, this was meant to help illuminate the subject’s virtues, in case they had momentarily escaped the notice of, say, a grubby-faced boy who actually couldn’t stand a curly-haired girl. Below the surface, this discussion was meant to teach the youngsters in the room that everyone possesses positive attributes, that such attributes gain traction if they are cataloged, and that it’s an act of love to talk about people behind their backs. Rumbling through a deeper subterranean level, down in our guts, was this lesson: if we didn’t like someone, we should tamp it down and play nice — at least while the adults were looking.

When it was my turn to receive my class’ Warm Fuzzies, I was excited and nervous. Even though I knew Mrs. Ring’s oversight would neutralize the cruelty I often experienced on the playground, still I worried. What if someone wrote something that made it past the teacher’s censoring eye but which I knew, from insider experience, was actually a cagily phrased verbal bomb? What if sharing as love decimated me?

Alternately, I also hoped that some heretofore concealed affection would be revealed through the Warm Fuzzies. I knew Daron and Brent and Paul had no time for me, a girl towering over them by six inches, a girl sporting a bra while they found Atomic Wedgies the height of amusement, a girl interested in Nancy Drew over kickball. But what if one of them surprised me — “Jocelyn, I deeply respect the way you keep your shoulders pulled back even though you have boobies” — and actually warmed my fuzzy?

Neither the worst- nor best-case scenarios came true. Those who didn’t much care for me subverted their feelings into ho-hum compliments enhanced by intricate drawings. A breakdown of their time on this loosely academic task would have seen 30 seconds devoted to sharing love and 4 minutes devoted to sketching out a shaggy monster or a marauding army of beasties. On the other side, those who were my friends wrote kind, affirming confidence boosters, formally inventorying everything they already said to me in the notes we habitually passed after school. Either way, the Warm Fuzzies contained no revelations. Whew. And maybe a little Darn. 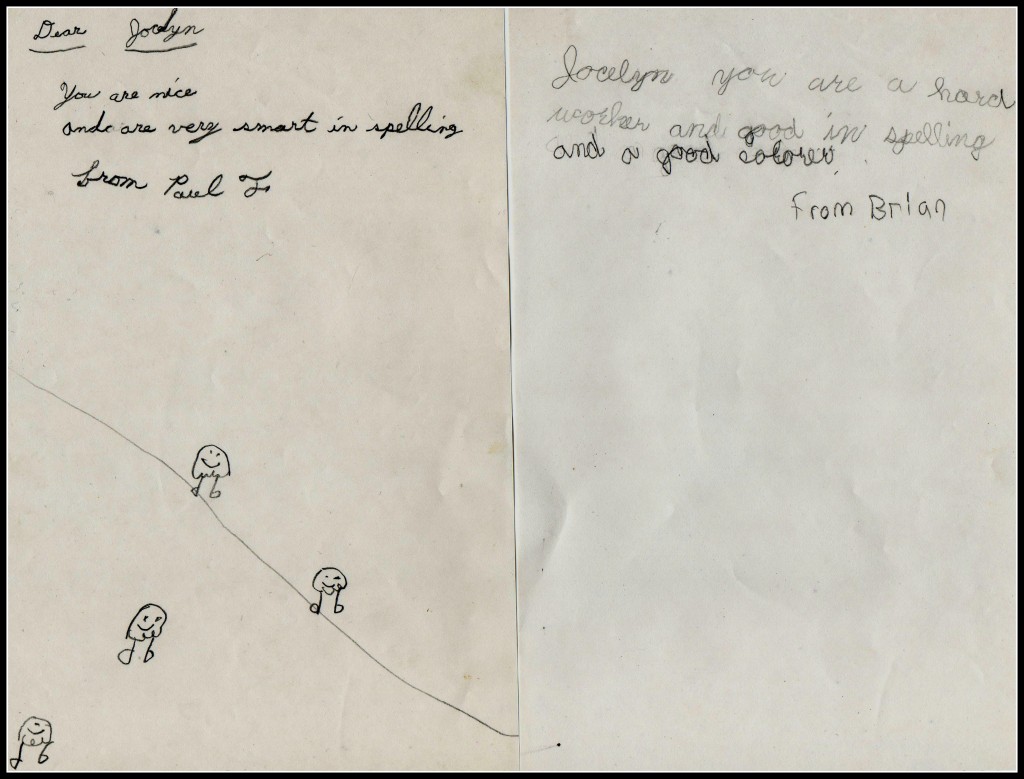 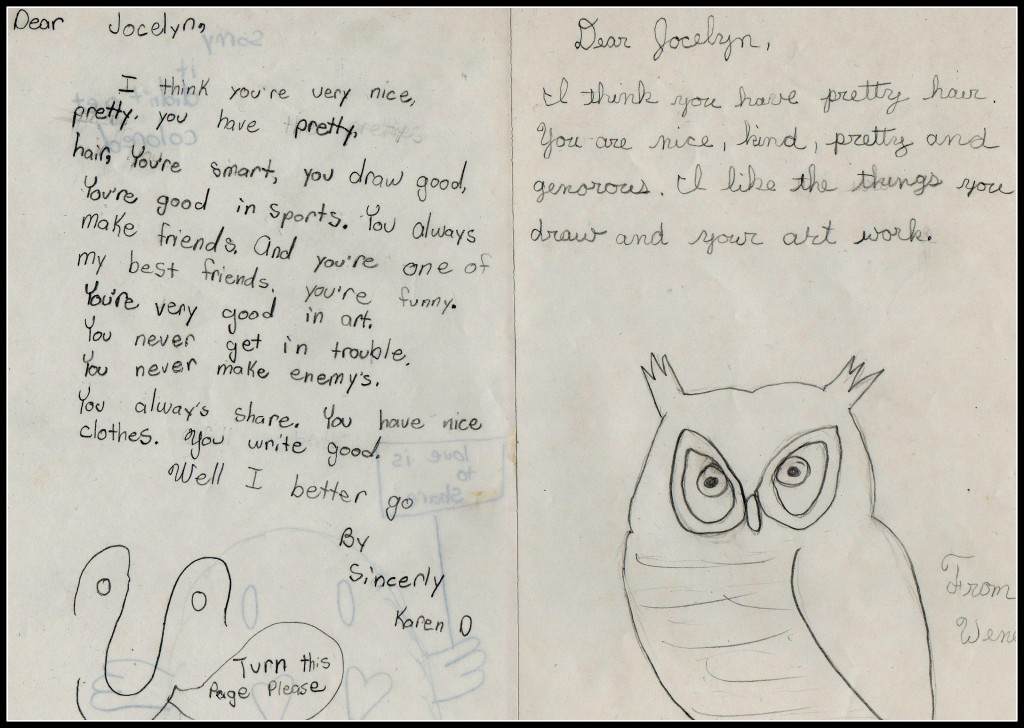 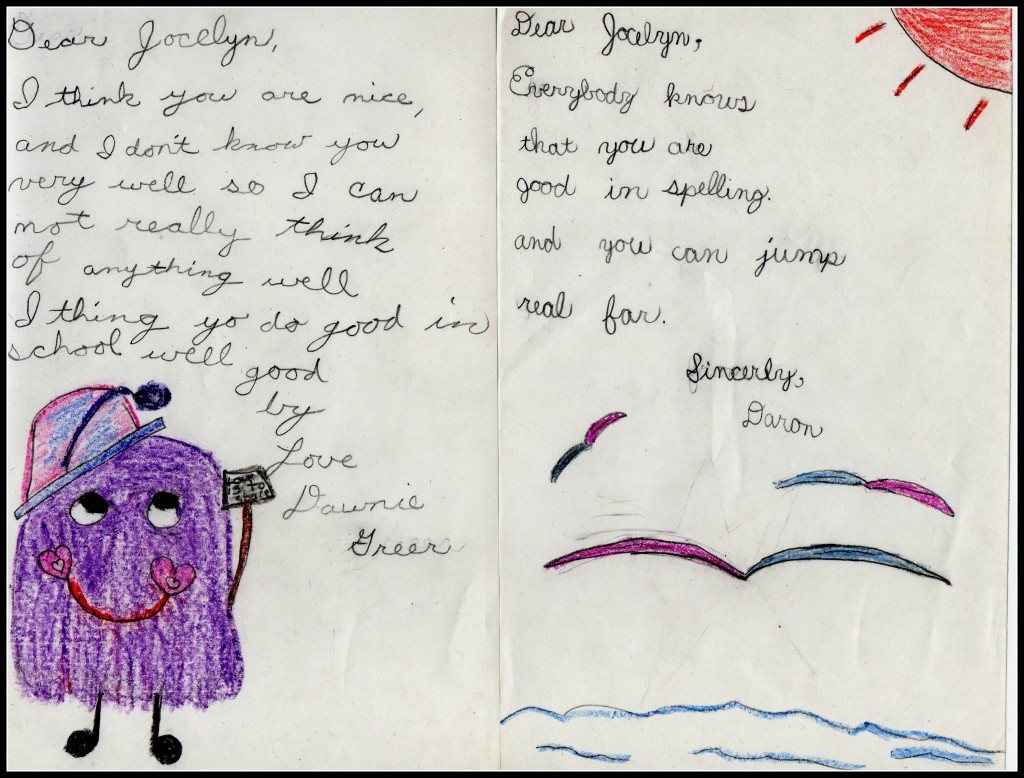 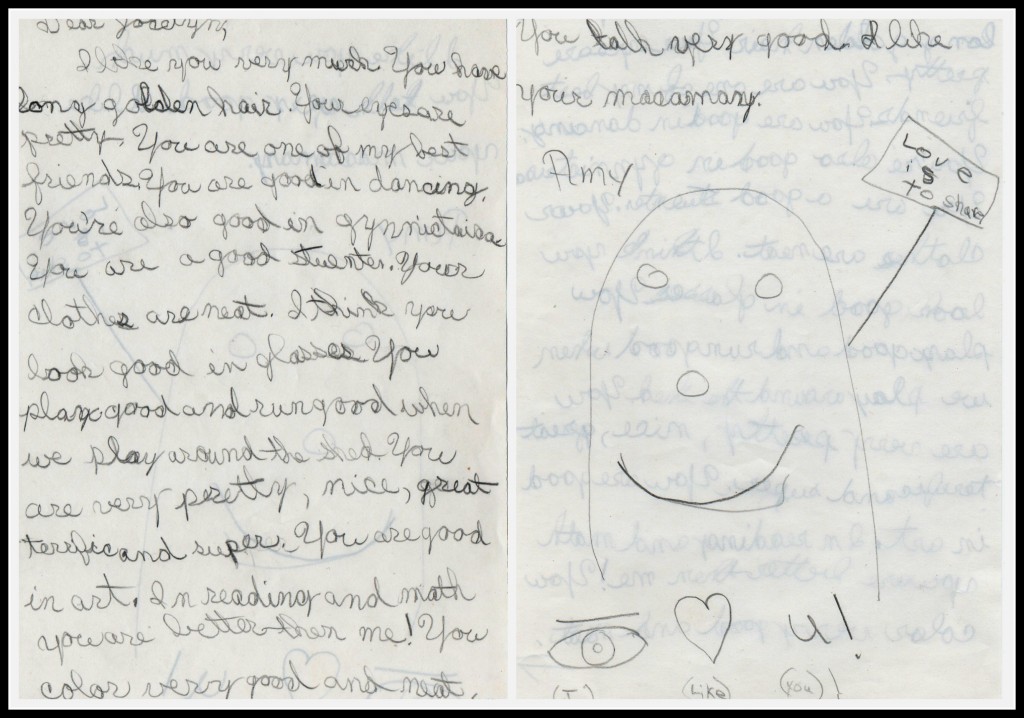 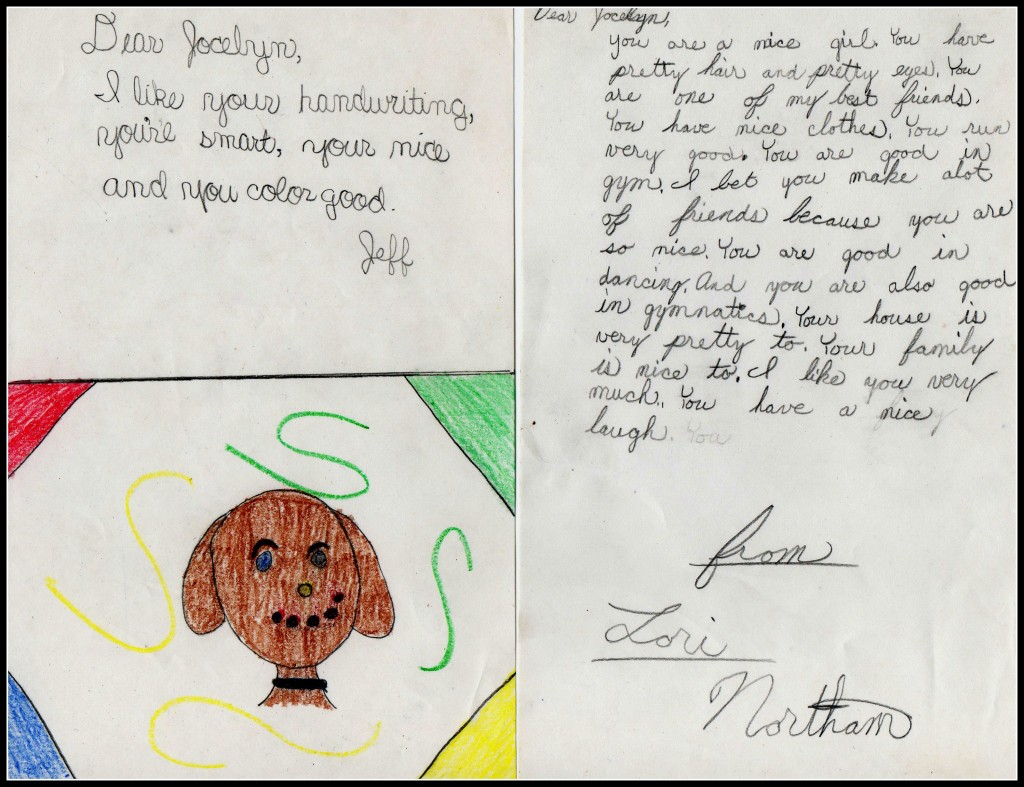 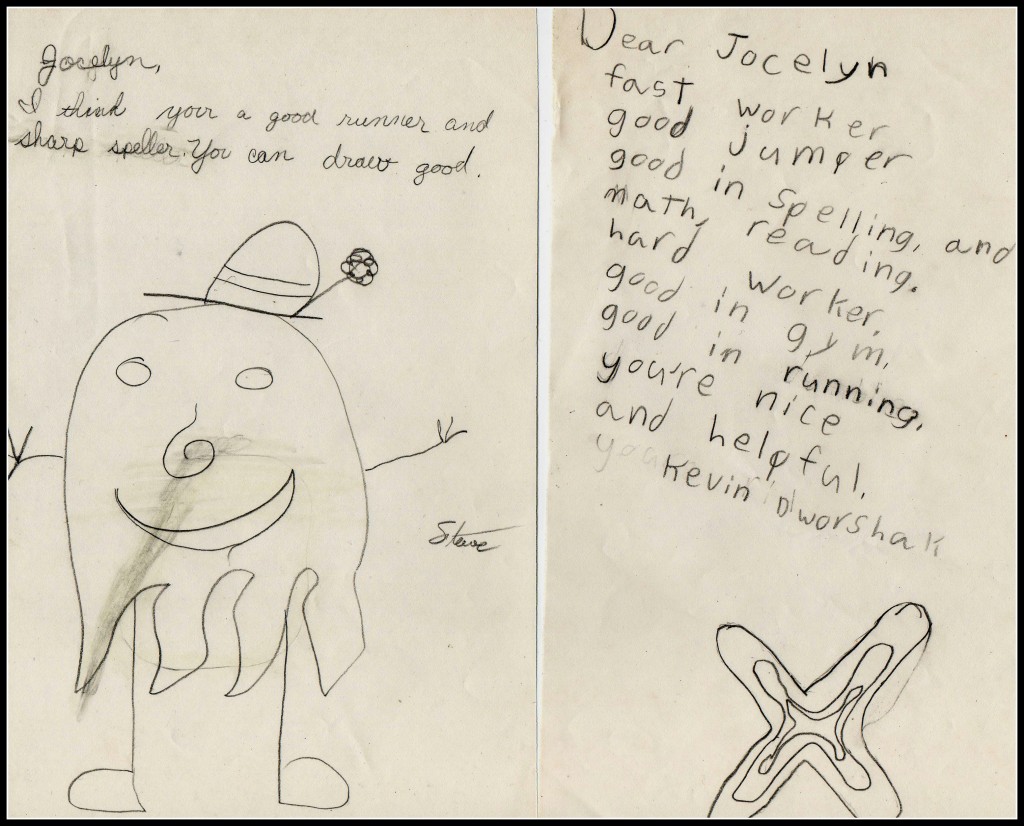 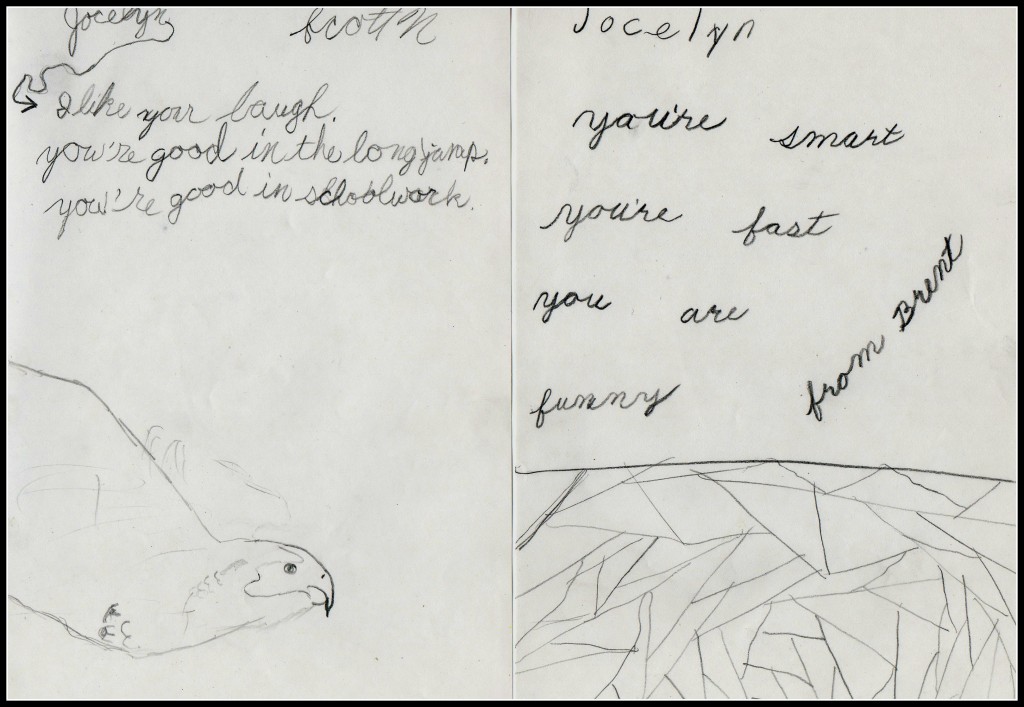 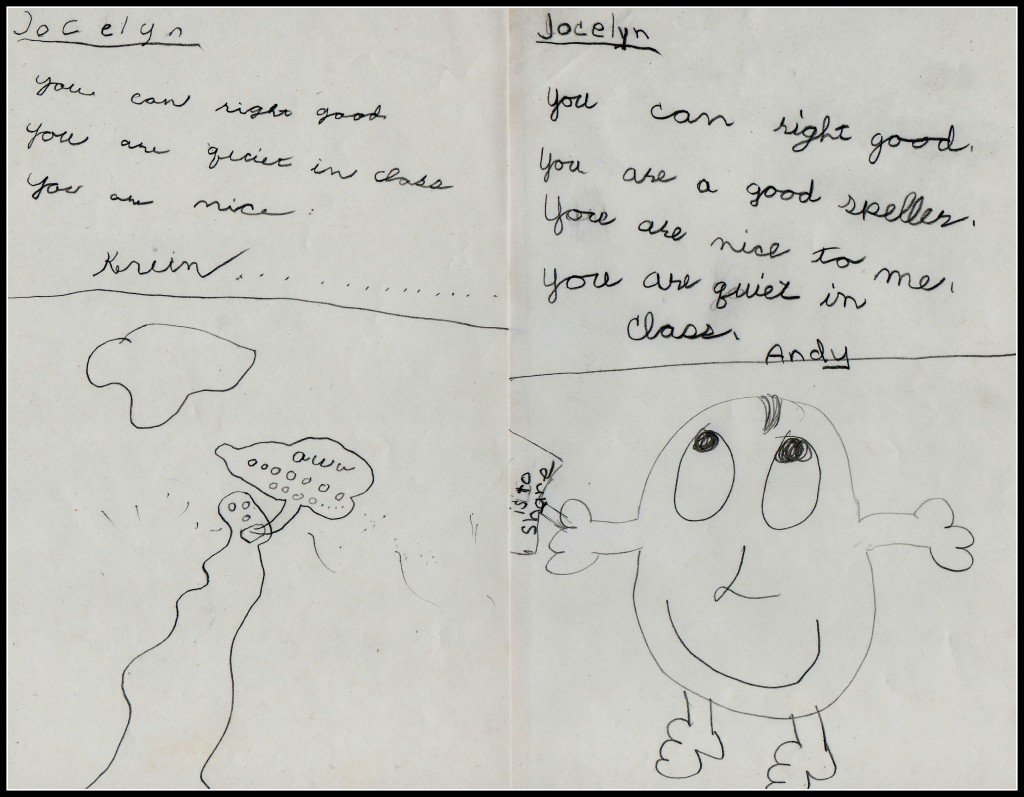 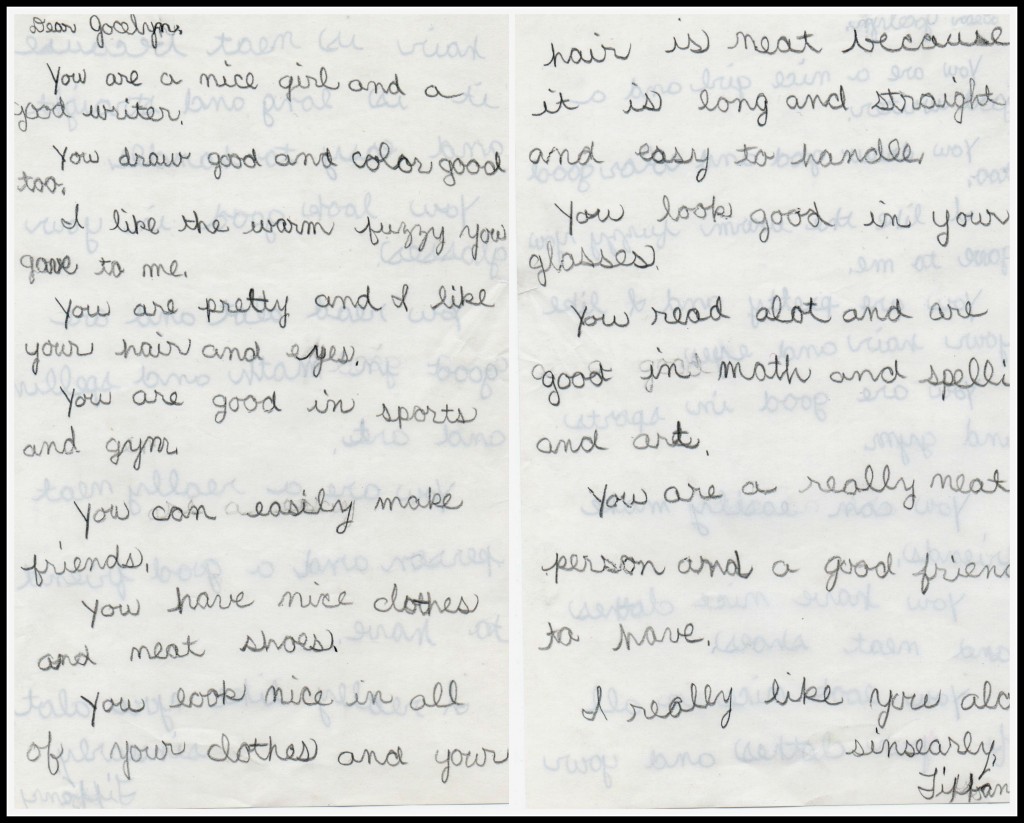 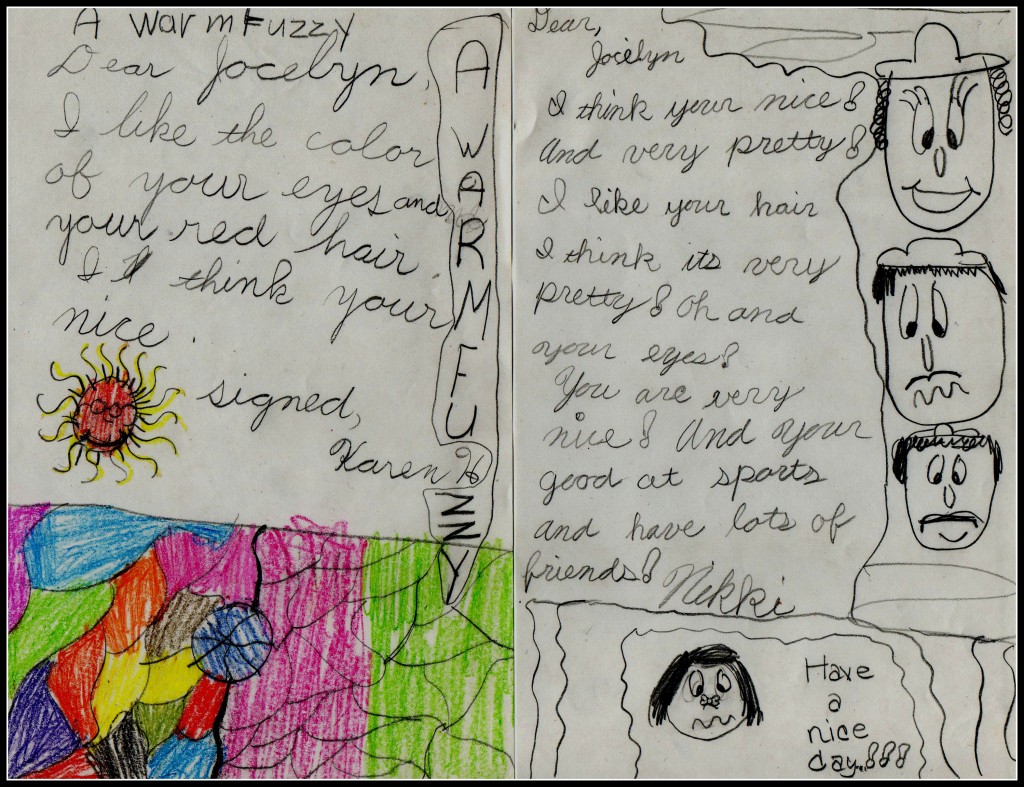 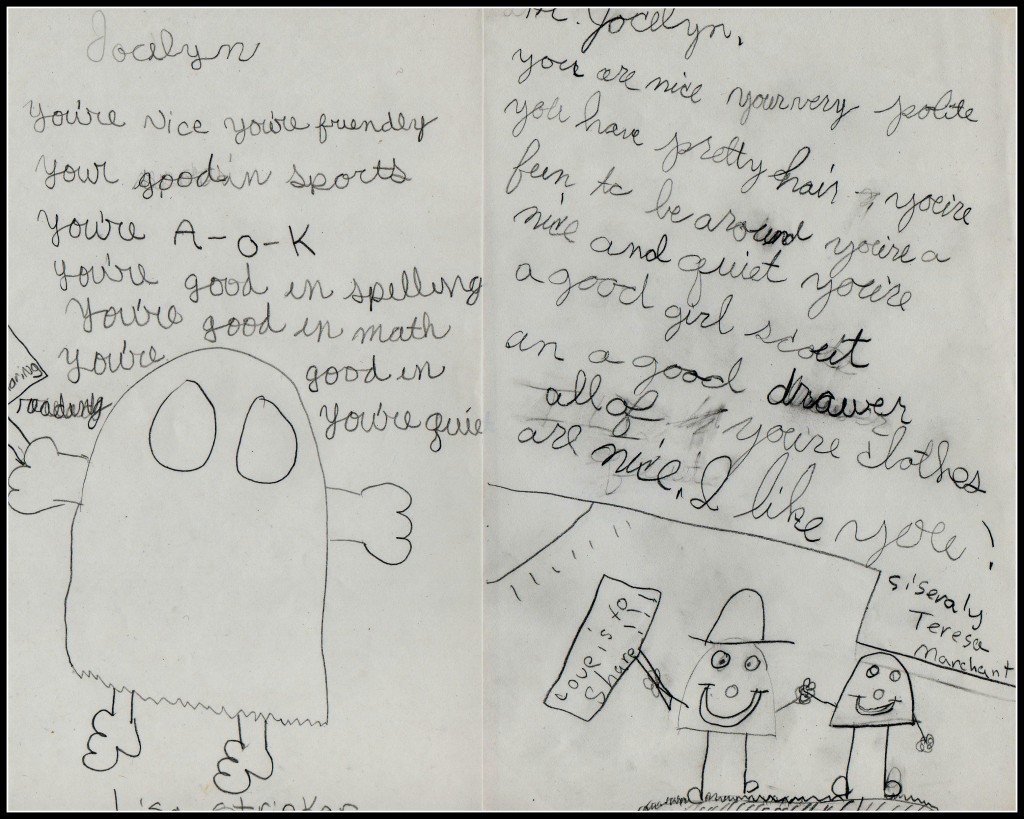 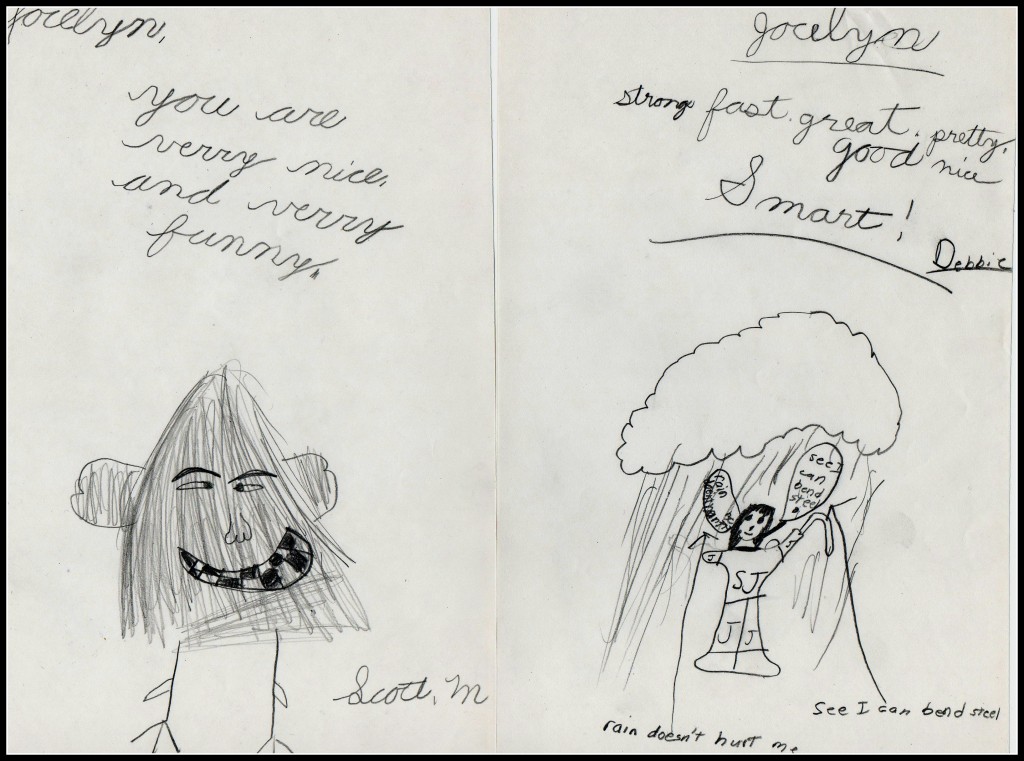 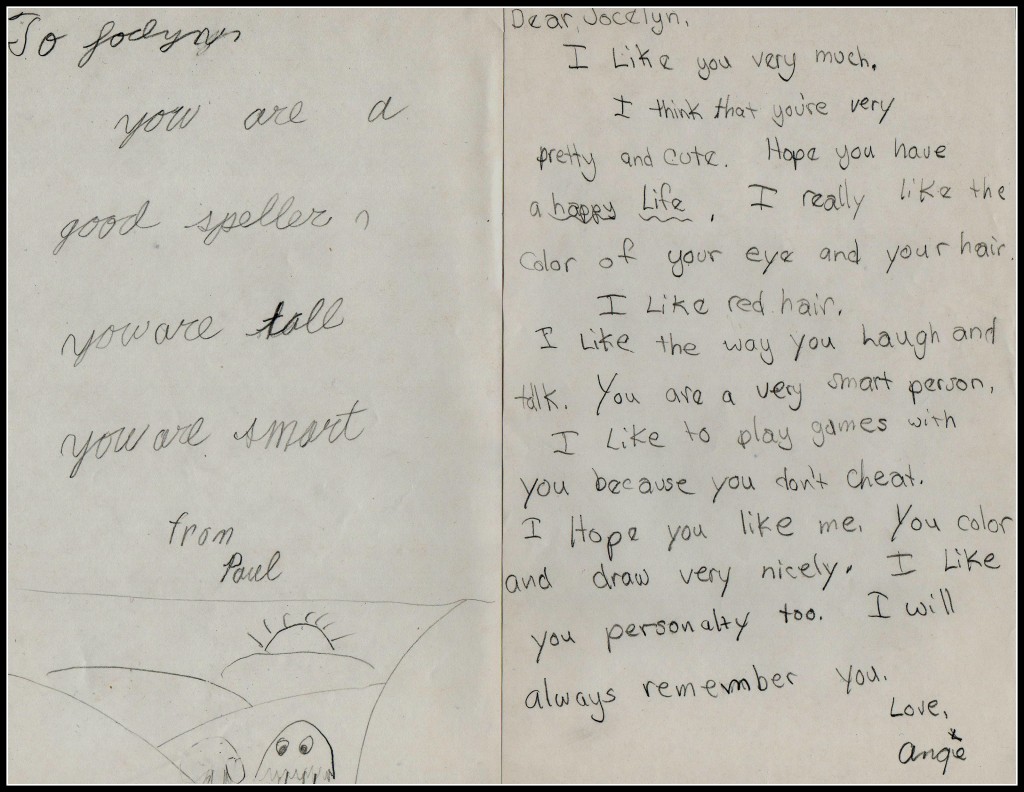 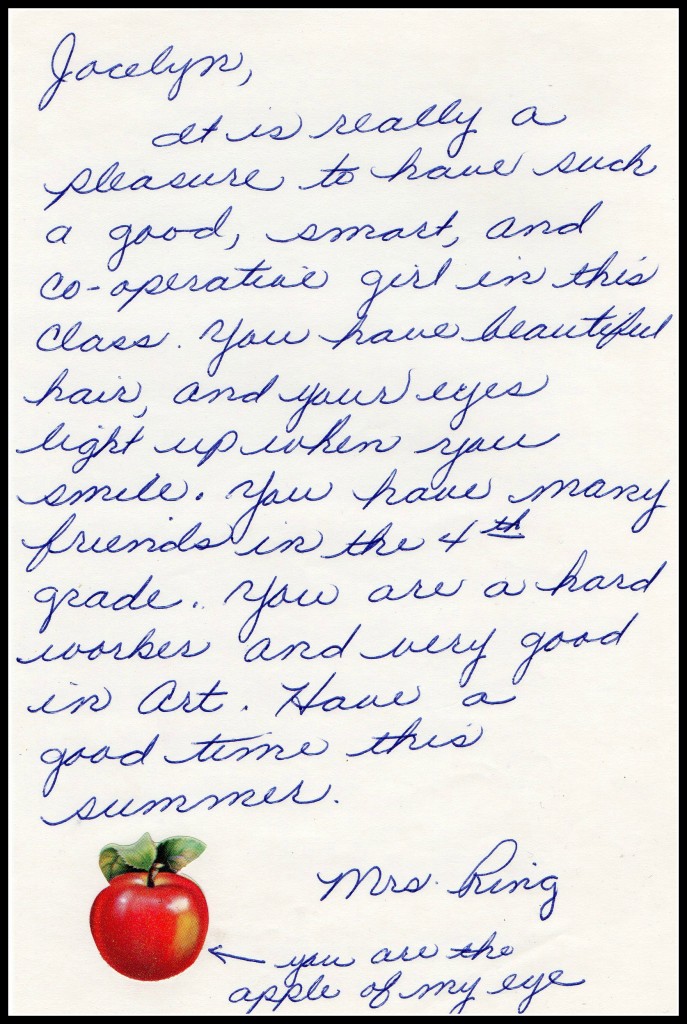 Looking back now on this collection of carefully orchestrated spontaneous expressions of affection, I have thoughts.

Then again, who knows?

Maybe, to this day, Angie thinks fondly about the color of my eye and the way I never cheated when we played games.

Maybe Debbie, as she stands in the rain bending steel, reminisces about my strong, fast, nice, great, pretty, good smartness.

Perhaps Scott still cracks up sometimes, thinking to himself, “That Jocelyn, she was verry funny!”

Possibly Tiffany still marvels to herself in quiet moments, “Dang, but Jocelyn’s hair was neat — so long and straight and easy to handle.”

It could be that sometimes Jeff, as he parks his Ford Explorer in his three-car garage, still muses, “Ah, that Jocelyn. She sure colored good.”

One thing’s for sure. When Amy is unpacking bags of groceries, jamming containers of yogurt onto the sticky middle shelf while her kids ask what’s for dinner, her mind occasionally drifts back to the undeniable beauty of my “macamary.” 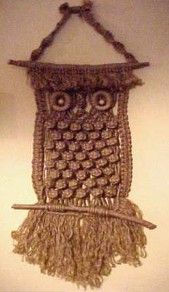 Most likely, at best, all those grown-up 4th graders spare a fleeting thought for their former Amazonian classmate every decade or two. They’re busy living their lives, paying bills, chauffeuring kids, working too much, ordering nachos, getting the oil changed.

But if, when, they do think of me, I hope they sense that I am sending them the adult version of Warm Fuzzies.

Hey, former classmates? Good job paying your bills, driving safely, working hard, knowing how to have fun, and being responsible.

You know what else? You look nice in all of your clothes. Your house is very pretty to. Your family is nice to. Your very polite. You have neat shoes. 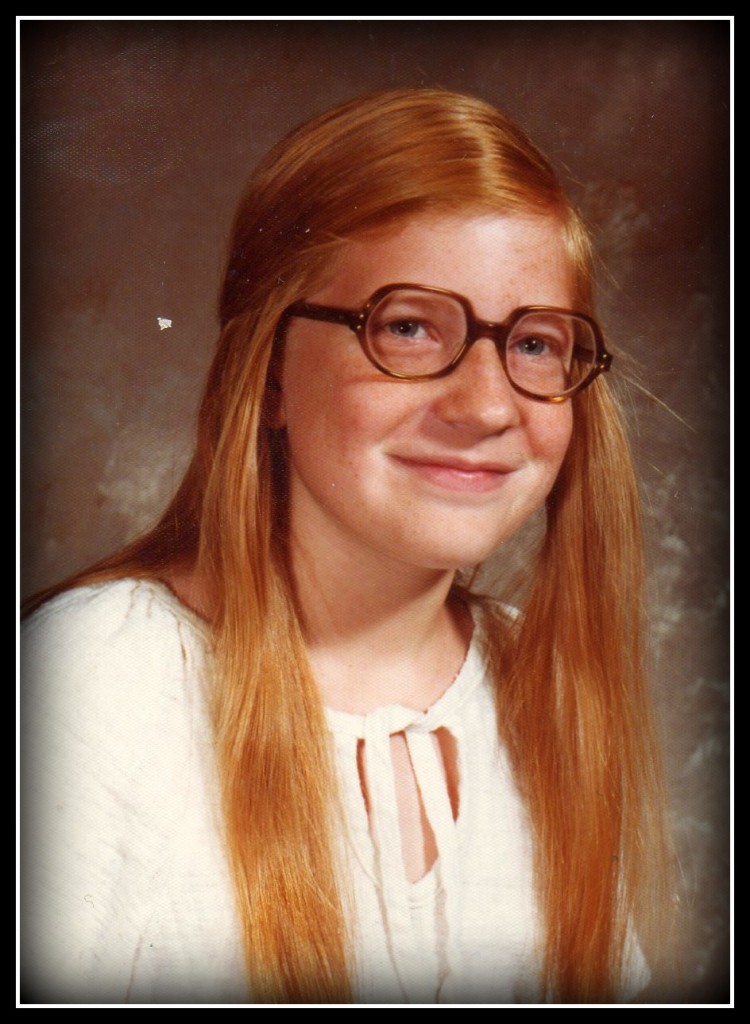