The history of quilts as utilitarian items stretches back thousands of years. In fact, the word quilt is adapted from the French cuilte, which grows out of the Latin culcita (“a stuffed sack”).
Originally, when just getting through a day entailed dawn-to-dusk work, quilts were entirely functional, made for warmth in the bed or to cover doorways or windows that were inadequate against the cold. As the centuries progressed, and life got easier, quilts began to marry function and art. On one hand, they were a practical repository for scraps of worn-out clothing; beyond that, though, they provided a canvas for personal expression, most remarkably amongst women who had been denied the opportunity to learn to read and write. Handiwork is its own kind of literacy. The resulting folk art tells their stories visually; without command of letters, they used fabric to create representations of their experience.
Taken together, all these folk art quilts present a unique version of history that words could never capture. We can look at a quilt, its fabrics, its stitches, its details, and be transported into the life of a woman who lived hundreds of years ago, feeling an intimate connection with the maker. We can touch what she touched. We can learn about her from her quilting choices. We get a sense of the texture of her days.
The website Why Quilts Matter: History, Art & Politics sums up the lasting power of quilts:
…you won’t find an object more central to the history of women than the quilt. [We should consider] the quilt’s historical and current roles as (among others) an avenue of personal expression, a sly medium of social and political opinion, and a building block of financial security. Unique among objects, quilts are both lowly “women’s work” and great art. They are something made from nothing; they are both nurturing and inspiring. They can communicate both intimate memories and great societal truths, and they have throughout history.
For me, I am not only taken by the quilt as an historical artifact, as craft become art, as political statement, I am fascinated by its ability to tell a story. Thanks to the gifts and willingness of my mother and her sister, Byron and I have just such a quilt, a document of our wedding weekend, a piece of folk art that captures the support and community that surrounded us on the day we made a public commitment to each other. 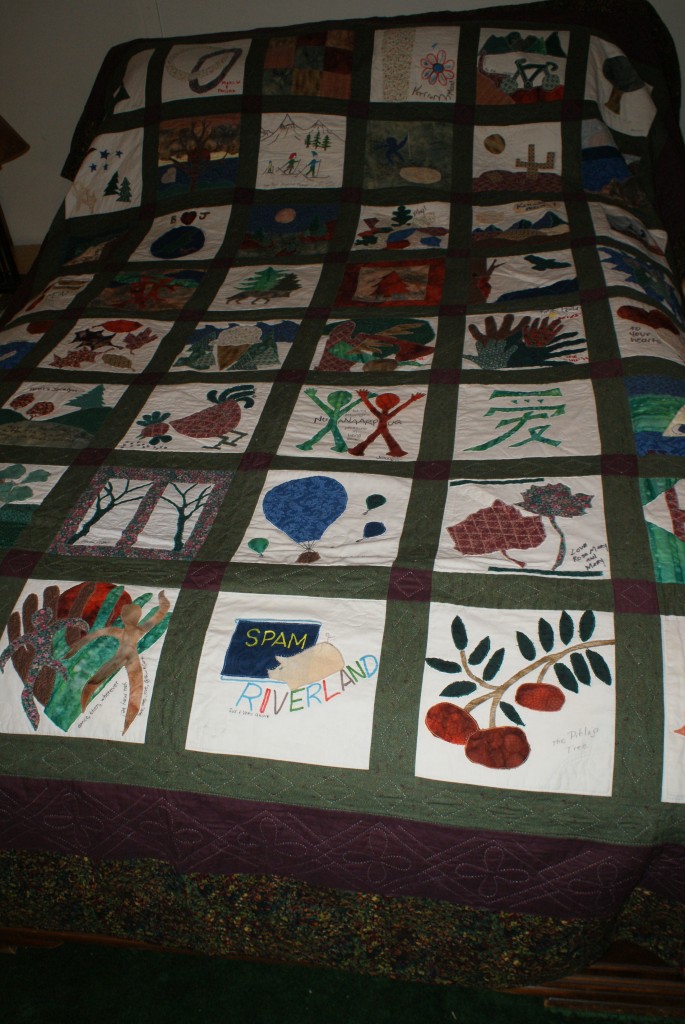 Byron and I married at an environmental learning center in Northern Minnesota; due to the generosity of its founder, we had the run of the campus for our wedding weekend, so most guests came Friday through Sunday so as to enjoy the rock climbing wall, ropes course, hiking, and canoeing. We also were able to ask them to take some time to create blocks for our wedding quilt. There was a room set aside for the project, and my mom and Aunt Geri not only brought material and implements, they also kindly dedicated six hours that Saturday, guiding guests in their creations.
After the wedding, my mom started work on the quilting. Her notes reveal that it took 25 hours to machine applique 46 of the 48 blocks. At one point, she asked for input from Byron and me for the placement or order of the blocks. We laid out all the blocks on friend Virginia’s living room floor and decided which piece should go where. A few months later, Mom pieced the top by machine, including borders, for 16 hours. She washed the batting by hand in a bath tub and let it air dry. The hand quilting took one-and-a-half years. Those with discerning eyes will note that each block has white-on-white quilting and a repeat of what is already in the block–like a bird or a tree. She sums up: “As usual–I enjoyed doing every step and every little stitch.” 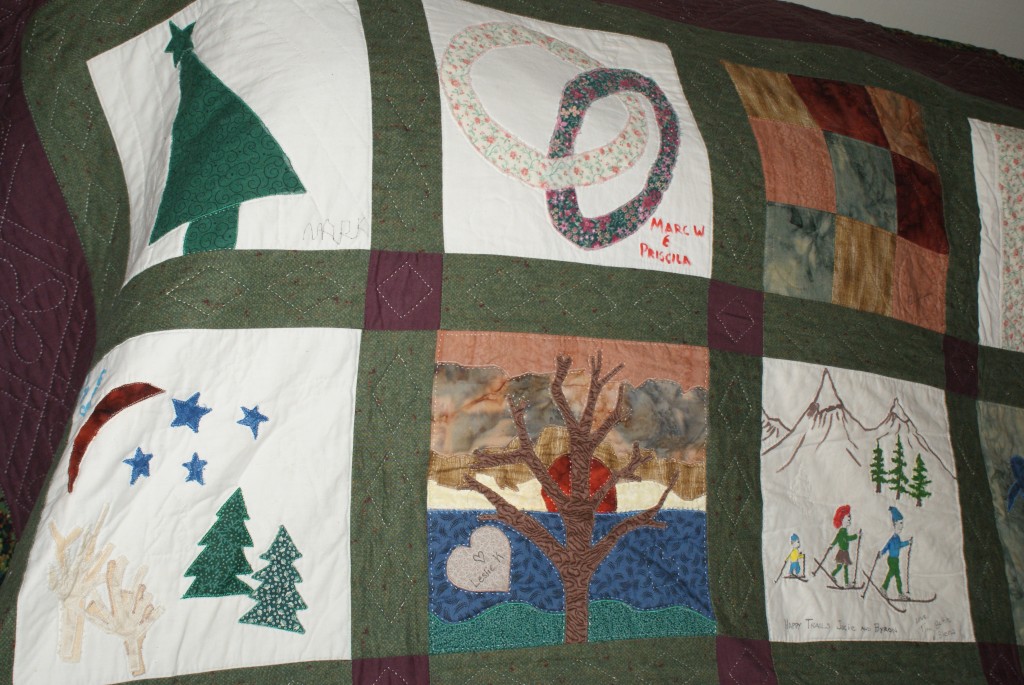 The blocks go on and on, each one telling a story or representing the connection between maker and bride or groom. Absolutely, this quilt is one of my most-treasured possessions, something I would be devastated to lose.

It’s more than a personal treasure, of course. It’s the story of a weekend, of a community, of the woman who stitched it, of the individuals who expressed themselves through cutting and arranging fabrics.

I hope one day my great-great-great-great grandchildren run their fingertips over the nearly invisible white-on-white stars, moons, dragonflies, suns, and berries

and feel each stitch as a legacy of love.

14 responses to “Wedding Needle to Fabric”