Social media inspires mighty lots of moaning. So much is lost! No one talks face-to-face anymore! Everyone on [insert social media platform of choice] is dumb! Rude! Annoying! People waste too much time clicking on stupid stuff! When these kids grow up and try to get jobs, they won’t know how to function in the real world! And their grammar! Harrumph!

When I hear these crotchety complaints, I consider the response shortened skirts and bobbed hair received in the 1920s. I think about the advent of Swing music in the Great Depression and how arbiters of mainstream tastes declared it would cause a rise in juvenile delinquency. Mentally, I watch Elvis’ hips swivel in 1956 as fathers scramble to turn off their new-fangled television sets, lest their daughters’ virtue be compromised.

Indeed, when people grouse about social media, it’s as though it’s 1964 again, and The Beatles are landing at JFK, taking a stunned look at the screaming crowd assembled on the tarmac, and jousting with waiting reporters (“What do you think of Beethoven?” asked one. “Great,” Ringo answered, “especially his poems.”) before taking the stage at The Ed Sullivan Show. On that night, gaping at the irreverent lads shaking their mop tops while avowing they wanted to hold all the girls’ hands, millions of people predicted the end of civilization.

Social media is the new Beatles. It’s radically upended the culture, and that never sits easy with those who were enjoying their armchairs and antimacassars just fine thankyouverymuch.

When a massive cultural shift occurs, people can either:

In other words, people have the choice to get on board with revolution or stand at a safe remove, mourning times gone by. Sometimes this choice is a function of age; sometimes it’s a matter of personality. In other cases, it’s simply a matter of not caring to engage.

For me, I’m the type to shed my crinolines, do The Lindy, mimic the thrust of Elvis’ hips, and weep from the sheer intensity of my adoration for four lads in matching suits. 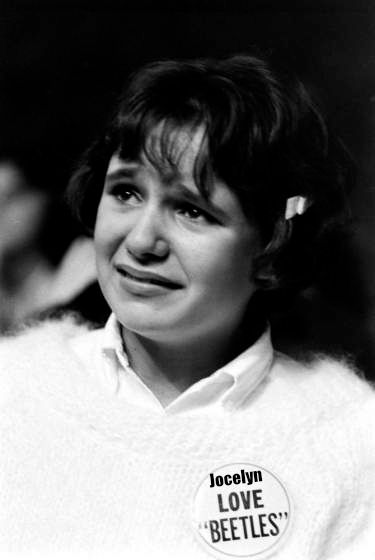 Hell, in the 1980s, I managed to combine the bow-in-the-hair look of Young Madonna, the off-the-shoulder sweatshirt style of a wanna-be-dancer-cum-welder a la Flashdance, AND the semi-unstrapped overalls vibe of Dexy’s Midnight Runners–all into one stunning outfit.

In short, I love social media. Mistake me not: it also drives me batty. I know it’s a time suck. I see how people’s feelings get hurt. I’m aware of the dramas. I acknowledge it’s not always the healthiest form of communication. I can see why tweeting and posting and updating and commenting have made many a wise person log out and rest her weary head on a neglected antimacassar.

However, for the way I’m wired, the pros definitely offset the cons. Plus, I know how to use the Custom settings, which allows for a comfortable level of control over the cacophony.

The biggest boon of social media for me has been the way it’s reinvigorated friendships that were languishing. Just as amazingly, it has brought me a whole new world of friendships. I’ve never actually met about 25% of my Facebook friends, for example. The majority of those never-met friends are fellow bloggers and writers, and they are an invaluable source of teaching, supporting, and advising. In profound ways, they provide me with perspective; they help me gain confidence; they provide me with a sense of community.

One highly valued member of my online community is a writer named Brooke. When, last winter, I proposed a piece of writing for syndication, posting the link within a private FB group, Brooke read the piece and reacted with a “Where have you been all my life?” Her reaction took me from nervous to glowing to wondering. Who was this kind, enthusiastic person?

Through private messages, I learned a fair bit about Brooke. She’s Canadian, which may be why she’s so pure, so lovely, so unfailingly thoughtful. I suspect, though, that she’d be equally amazing no matter where she’d popped up on the planet. Innately, Brooke supports those around her, brings humor and light to the space she occupies, and is generous to a fault. Her kindergartener is the luckiest of girls, to have such a person for a mother.

I have never met Brooke, yet I value her friendship deeply.

Thus, I’d like to share one of the great gifts that social media has brought to my life: the words of Brooke, who blogs at missteenussr along with contributing to a host of other online publications. Below is a post that originally ran on her blog, a story of parental love and fear, one that she is kindly allowing me to share here.

In summary, a million happy cheers for a world where there is Brooke! 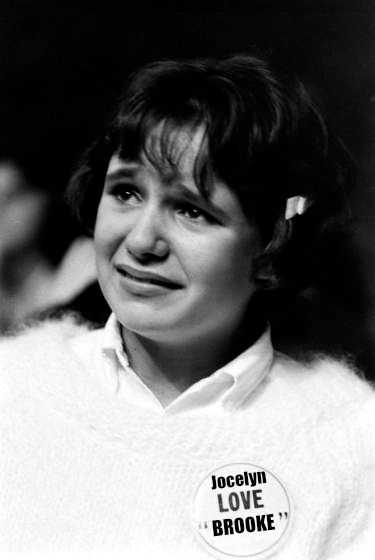 when your kid is sick

I take my health for granted, which is why when I get sick, you want to avoid me like the *plague. (*Quits day job to go write for Big Bang Theory.)

I’m suddenly the introspective ancestor of the most depressed Bronte sister, all long lopes out of rooms with tears prickling the corners of my eyes, non-blinking gazes out windows, and martyr-like dramatic declarations. “I’ll be FINE. It’s FINE. It’s just a FULL BODY INFECTION really.”

Nobody likes me. Everybody hates me. I think I’ll go eat more germs.

So when my kid gets sick and she is not a huge pussy, I am proud as fuck. Genetics may have bequeathed her my 17,000 body moles and horrific singing voice but she’s tough as nails in the face of any and all illness.

Overall, over the years, we’ve been so lucky. Kids are typically giant dump trucks of whine, worry and warts. Not mine. My 4 year old has weathered goo-filled common colds with grace; kicked croup’s ass with ease as we wrung our hands; let us slather eye ointment into each eye for a week with no fuss; and every bang and bruise is totally negated by our kisses.

She has never vomited. Weird, right? And if she did, afterwards I imagine her staggering to her feet, wiping her mouth and sighing, “Woof. Pass the mouthwash Ma. I’ve got funky year old Cheerios wedged in my molars.”

She’s tougher than the skin on the back of Mick Jagger’s neck.

It makes me so proud.

(I joke and joke and exaggerate and fill those meaty sentences above with fewer commas than they deserve because I was scared.)

An autumn cold had morphed into something treacherous. Her guts were being forcefully pushed out and then in with each laboured breath. We took her to the Emergency Room to figure out if she had an Alien in her chest or some other reasonable explanation.

(I joke and joke and complain and lament and roll my eyes about this parenting gig, but if you ever took it away, I would break into shards of lost bones.)

While we waited to be seen by a nurse, the 4-year-old heaving warmth on my lap asks the room loudly, “Does she have nails?” I look to our left and see the woman beside us has cultivated an almost Guinness World Record set of yellowed talons and I swallow a deep sour mouthful of spit.

(I don’t believe it when they say if you lost a child, one day, you could feel alive again. I just do not.)

She lounged on her hospital bed, ankles crossed, arms above her head like she was on a Mediterranean yacht, as I paced around the tight room. Not imagining the worst but rather holding a hand over that part of my brain that muffle-whispers terrifying things…

(Children are just a loose sac of parts that work in tandem, because, why? What if I continue taking that for granted? What happens then?)

The diagnosis was bronchiolitis; something that sounds like something Barney Rubble would catch. She was asked to inhale steroids through a hissing misting mask and she pulled the mask on with a matter of fact face, like YEAH YEAH YEAH, I’ve got my programs to watch at home so let’s get this shit started.

Our heart rates slowed to a number the Doctor liked.

(When your child is sick, your child, you are more sick in the head, and your heart pounds out I MADE THIS HAPPEN because I paid more attention to blogging about her instead of being with her.)

My husband carried her back to the car, her socks pulled high on bare legs. Feet stuffed into sparkly Mary Jane’s and her Elsa dress thin against the night.

I slept on the couch in her room and didn’t sleep at all. Every time she coughed my eyelids flapped open like cartoon character venetian blinds.

(By next Tuesday I’ll have exfoliated this guilt and fear. I’ll have found something thisbig that I turn into THIS BIG. And then get 46 flu’s because I firmly and completely deserve it.)

She woke me up the next morning at 10:50 am, over-the-moon delighted to see me in her room, hovering with her blinding breath, already launching into a story about our day.

(I’ll learn a little from this, then press it away in the back of my head that remembers my Mom is going to leave me one day too.)

I’ll get better too.

I’ll tweet about her being a dick and the black oil in my brain will rear back and remind me of that night in the hospital. So I’ll put my phone down and ask her 47 questions about Frozen and actually listen as she tries to break down the plot with sweeping arm gestures and repeated “true love heart.” I’ll tell her I think I know what that is and she’ll shush me for interrupting and I’ll think this, this right now is what I want to take for granted.

One response to “when your kid is sick (guest post)”