A lesser daughter would have been mortified and fled down the corridor to stuff herself into the nearest locker, slamming the door and refusing to ever come out.

A lesser daughter wouldn’t have stood there, hanging close, her face flushing red as she, too, fought back tears.

A lesser daughter wouldn’t have told her oblivious father, who was trying to herd the family down to the Scholastic Book Fair, “Hey, Dad, we need a minute. Your wife’s crying over here.”

A lesser daughter wouldn’t have made me cry, right there in the hallway during parent/teacher conference night.

I couldn’t help it.

I’d been hearing, at random moments during the previous few weeks, that she’d written a poem for Language Arts class and that she could take that poem down from the wall and bring it home after the parent/teacher conference with her home base teacher. The fact that this doesn’t-talk-much kid mentioned it more than once alerted me to her excitement.

Thanks to childhood training with my Finnish-ish father, I know full well that if someone of Northern European/Scandinavian extraction mentions something more than once, it’s equivalent to an Italian climbing the side of a bell tower drunkenly at midnight and ringing the carillon until Mount Etna erupts in response. Seriously, if my daughter mentions something three times over the course of two weeks, it’s something.

So we finished her conference with her home base teacher (standard stuff: “So smart; such a great kid; only one thing: it would be nice if she raised her hand and participated more”), and then she went out to the hall and peeled her poem off the wall. Knowing that my role is to create the clamor that helps express my kids’ excitement–they all don’t mind, at our house, if I externalize the things they have tucked inside–I demanded, “Lemme see it! Lemme see!”

She handed me her poem, and we walked down the hall until we could pull over in a quiet corner so I could read it.

That’s the point where this mother of a 13-year-old girl burst into tears, right there in the middle of the middle school, and the 13-year-old didn’t roll her eyes or give me the “Maaaw-um” of embarrassment or stuff herself into a locker. She stayed close, got red, and fought off tears.

For someone of Northern European/Scandinavian extraction, this was equivalent to an Italian rending her clothes, yanking out tufts of her hair, beating her breast, throwing her hands to heaven, and collapsing into a heap in the dust as the tinker’s cart pulls away. She’d wanted to buy two buttons, you see, but the tinker had none.

That poor Italian. With all the clothes-rending that goes on in her daily life, it’s a wonder she didn’t need more than two buttons.

So my reserved daughter stood there, awfully close, and absorbed the compliment of my public tears.

After a minute, I gasped, “Okay, I’ll go to the bathroom and do a little recovery there. I don’t need to keep standing here, crying, but I can’t stop. The thing is, about this poem, Allegra, is that it’s just the best thing. It’s just the very best thing.”

It’s not that the assignment was original; I’ve seen this assignment come home before, during other years of school. It’s a somewhat standard assignment.

Then I read it again and start crying all over.

Do not let the fact that I also cry every time I watch a commercial that uses a John Denver song convince you that my tears come cheaply. Oh, all right: they do. But these poem-tears are different tears. These are “My kid gets it!” tears–very different, the discerning observer will note, from John Denver tears.

I love her poem. Just as much, I love that she loves her poem, too. 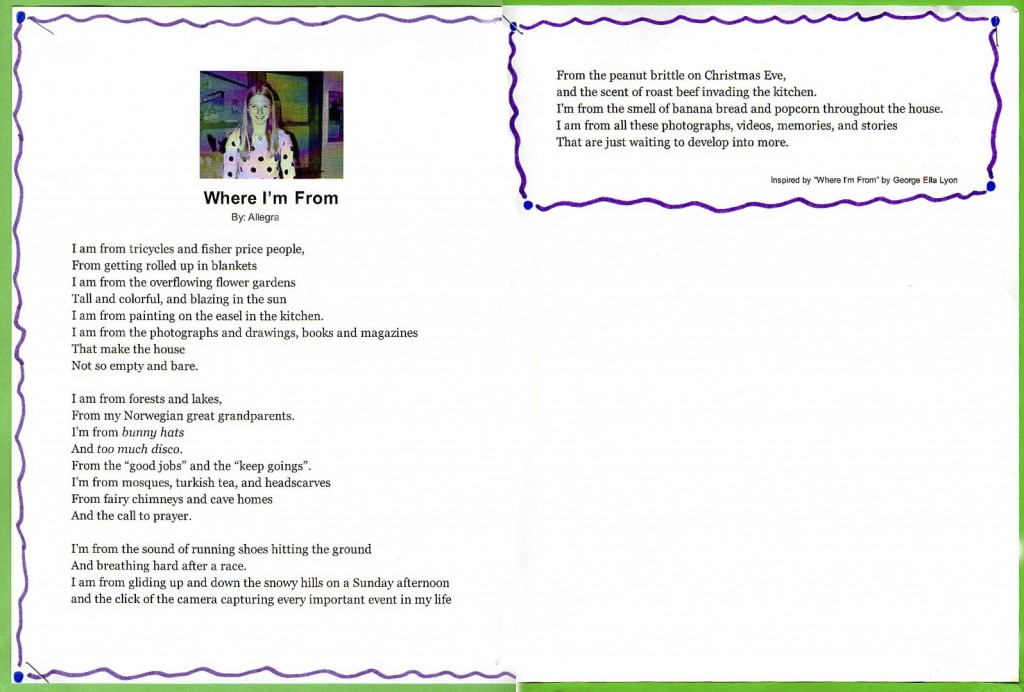 I am from tricycles and fisher price people

From getting rolled up in blankets

I am from the overflowing flower gardens

Tall and colorful, and blazing in the sun

I am from painting on the easel in the kitchen.

I am from the photographs and drawings, books and magazines

That make the house

Not so empty and bare.

I am from forests and lakes,

From my Norwegian great grandparents.

and too much disco.

From the “good jobs” and the “keep goings.”

From fairy chimneys and cave homes

And the call to prayer.

I’m from the sound of running shoes hitting the ground

And breathing hard after a race.

and the click of the camera capturing every important event in my life.

From the peanut brittle on Christmas Eve,

and the scent of roast beef invading the kitchen.

I’m from the smell of banana bread and popcorn throughout the house.

I am from all these photographs, videos, memories, and stories

That are just waiting to develop into more.

Inspired by “Where I’m From” by George Ella Lyon