Why You Not Date Me?

I desperately wanted a boyfriend.

Starting in about fifth grade and then picking up momentum in sixth, seventh, eighth grades, it was all the rage to “go steady” with someone. No one ever asked me to go steady, save one brave boy (a foot shorter than I) who whispered his request across the aisle during math in 6th grade. Inexplicably, I became paralyzed and stared straight ahead at the blackboard instead of acknowledging his words. Although I didn’t understand my own behavior at the time–and doesn’t that sum up adolescence, really?–my adult self guesses that his general air of geekery didn’t fit into the inflated vision I had of what my life would look like if I had a boyfriend. His elfin presence at my towering side wouldn’t boost my social status. Plus, I’d probably drop my instrument case on him during band and crush him into nothing more than a small spot of grease next to a music stand. The whole thing didn’t bode well. So I ignored the one and only request to “go steady” that came my way.

My closest friends went steady with boys named Eric, Jay, Michael. They flipped their hair, walked the halls of the school with their boyfriends, passed notes in class, stood next to each other outside on the black asphalt after lunch, shared a seat on the bus for field trips. They got kissed. They made out. They had a sense that they were worthy commodities. They were able to believe in their value on the open market.

Unfortunately, that’s what going steady did for pre-teen girls in the 1970s and early ’80s. Maybe it still does.

Because it was tacitly accepted in my group of friends that I wasn’t a viable commodity, I became everyone’s wingwoman.

Need a friend to stuff a note into Jason’s locker? “Could you, Joce?”

Need someone to keep an eye out for teachers while you wander around the corner of the school to do some clutching at each other? “Could you, Joce?”

Need someone to call Tom’s best friend and find out if Tom likes Lori? “Could you, Joce?”

Want to make cookies to give to your steady on the day of his big 8th grade football game? “Could you come help, Joce?”

There’s a particular kind of melancholy that lives inside the wingwoman. To be cast as a supporting player when my most fervent hope was to be the star of someone else’s show, well, that was a grinding kind of diminishment.

It would take some years and 104 nights of tears before I realized the key to everything was to become the star and author of my own show.

Here’s the thing: even though I was full of wish and want and sad and happy and bravada and fear, even though I had all the emotional chaos of adolescence swirling around inside me, beneath all that noise,

I actually though I was pretty great. I was smart. I understood sentence boundaries. I had good hair. I could shoot a basketball and play H-O-R-S-E. I liked heavy metal and The Village People and The Knack, all in equal measure. I could replay the highlights of each week’s Love Boat episode and really probe the subtext. I was easy-going, full of bon homie.

Thus, I lived in a state of cognitive dissonance. My most basic self believed I was lovely. Yet the world seemed at odds with this perception–seemed, on some days, to delight in hacking away at any small confidence I might have. The end result of this dissonance wasn’t anything profound. Mostly, the end result lacked subtlety. The end result was me, always wondering,

WHY NO ONE WANT TO DATE ME?

If we examine photographic evidence from the period, the fact that no one wanted to date me becomes even more puzzling. 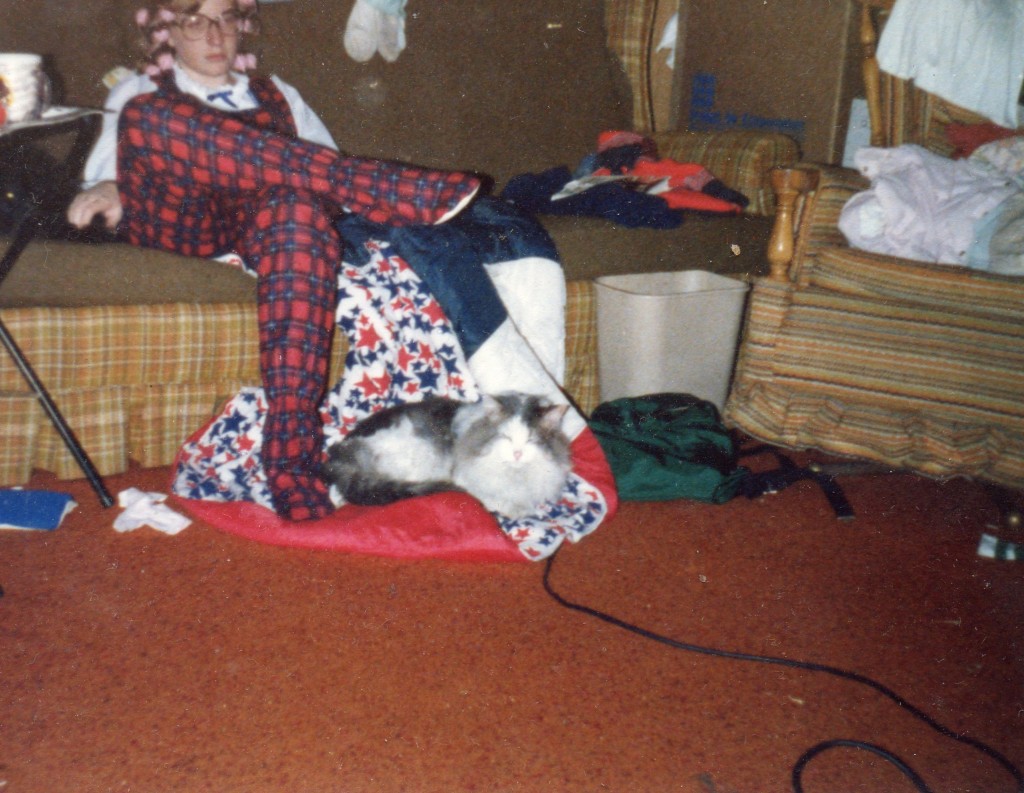 The curlers indicate that this young woman cared about her appearance.

The presence of a cat at her feet indicates that even prickly creatures were comfortable in her presence.

The large-framed glasses indicate a young woman who wanted to see the world.

The random bits of crap everywhere indicate that she was engaged in higher-order thinking.

The Stars-‘N-Stripes sleeping bag draped casual indicates a love of country and warmth.

The plaid footie pajamas indicate a well-developed sense of personal style. This was someone who took joy in texture and softness. She was a bit of a charming Peter Pan in her refusal to grow up entirely.

The television tray to her right indicates an openness to cocoa.

The black cable cord running across the orange carpet indicates she was hip; this minx was with the times. This girl watched MTV and had something to say about both Martha Quinn and Nina Blackwood.

This young woman had foresight and a sense of “everything in its place.” She always kept a waste basket close at hand.

SO WHY NO ONE WANT TO DATE ME?

You will continue to be confounded, as you examine this next bit: 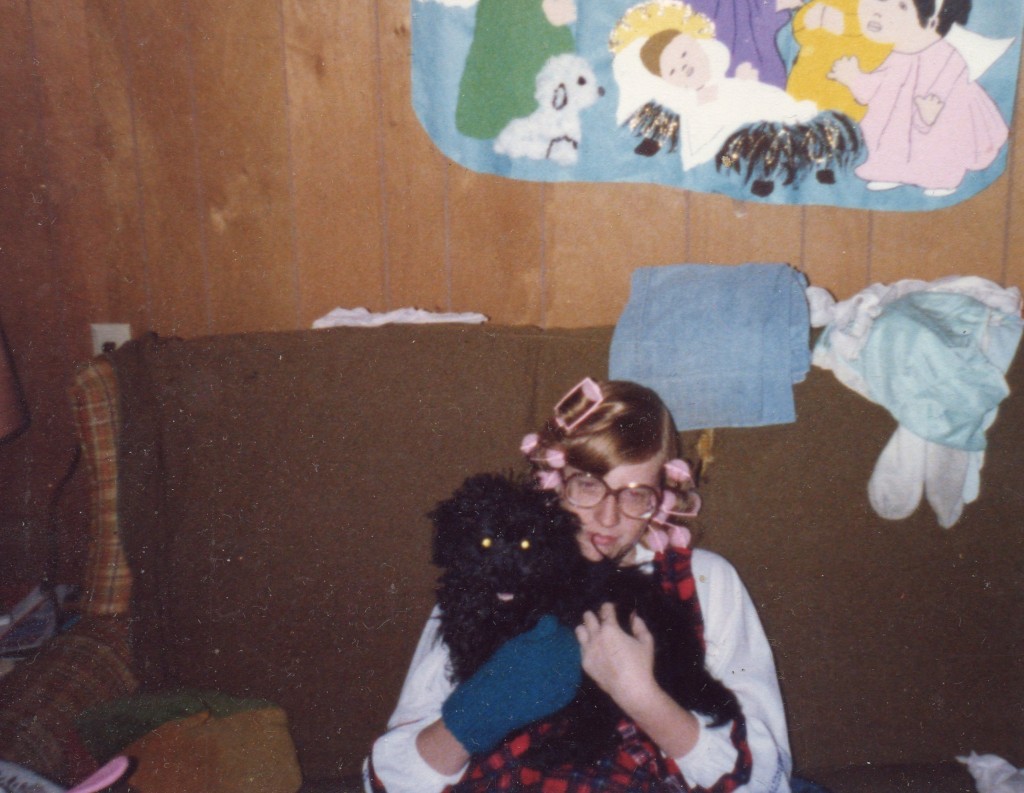 I was a young woman who was watched over by angels, Jesus, and a little lamb who looked like a white poodle.

There is evidence here, as well, that it was not only the cats of the world who sensed my inner kindness. Doggies also knew I was good for a cuddle.

The stacks of clothing on the back of the couch indicate I already had a sense of housewifery. While sipping at my cocoa, I folded the laundry.

The rough brown Army blanket covering the back of the couch hints at frugality and a kind of toughness. This young woman was no pansy.

Most importantly, this young woman had a mitten. And a mournfully poetic gaze.

WHY NO ONE WANT TO DATE A POETIC GIRL WITH A MITTEN, PLAID PAJAMAS, CURLERS, A DOGGIE, AND ANGELS WATCHING OVER HER?

Ultimately, the lessons of adolescence were that the world is a confusing place, and there’s no explaining taste. I find myself grateful for photos from that time so that I can reassure myself of what, deep down, I knew to be true:

I was a prize.