On the surface, Johann Sebastian Bach was just another poncy wig-wearing composer. But beneath the wig lurked something more menacing: the ability to derail promising futures.

If he’d been born even a year sooner or later, I might actually have a high school degree today, and a high school degree, as popular lore would have it, can open doors and transform income potential. With that degree tucked into my back pocket, I could currently be enjoying a high-paying professional career in a positive work environment, leaning on the water cooler and swapping stories about landing the Steverson Account, signing collective Hallmark cards to celebrate birthdays, all while surrounded by intelligent, supportive colleagues.

However, Bach had another idea when he somersaulted from his mother’s loins in 1685, an event that, three hundred years later, put a crimp in my degree-seeking style. That harpsichord-plinking mucker-upper.

1985 was the year I was to graduate from high school. 1985 was also the year that marked the tricentennial of Bach’s birth. The confluence of these events was akin to Thomas Edison’s invention of the light bulb and the subsequent birth of a guy named Caleb Powers about 40 weeks after a city-wide blackout 70 years after that invention. In both cases, one thing happened, and later another thing happened, and only the canniest observer could possibly link the two. My head is kind of cannish, for sure–like a Campbell’s soup can; it’s all roundy and full of sloshing liquid and on occasion goes crackers. I canny.

So that’s how I know Bach made me not graduate. My connectual and linking abilities sussed it out. See, to commemorate it being 300 years since Bach popped out, my dad decided, in 1985, to take his college choir on a tour of Europe, where they would travel from country to country, performing in various cathedrals for those citizens who had long wanted to hear Montana and Wyoming cowboy kids warble chamber music.

As long as my dad was taking a crew of teens through France, England, Germany (East and West), Austria and Czechoslovakia, and there was a “the more bodies, the cheaper the price” deal in place with the tour company, my mom decided to go along and sing as part of the choir. What, then, would be the hardship of a couple more tag-alongs, like my sister and me? (alternate reading to satisfy the wrong, plain wrong, hyper-grammar correctors in the audience: “…like my sister and I?”)

The tour would depart in May and last for almost three weeks. We would see towers and castles and churches and cheeses and beer gardens and gazebos and tombstones. We could literally weep over Bach’s crumbled corpse. (note to my 18-year-old self: read up a little on that dude, so you care a bit more genuinely about him than you do the lads loitering in each city’s central square, smoking and sporting attractive Euro-trashy Flock of Seagulls’ hairdos) 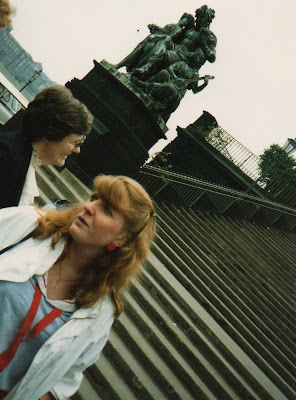 (Fer Christ. Look: a statue. In a Europe place.)

The plan was set. The choir and the Jocelyn were ready to rock the Continent.

I happened to be attending this diploma-granting institution named High School. It was a small-minded place with unreasonable policies, like don’t set stuff on fire or urinate on the books or feel happy or miss more than 20 days of school each semester. As it turns out, I had missed four days already, before Plan Europe evolved:

I had missed a morning in my role as president of the AFS Club (American Field Service—an international student exchange organization; I had lived in Denmark with a family the previous summer thanks to this program) to set up an all-school assembly. I had missed two days while attending speech meets out of town. I had missed a fourth day for a National Honor Society activity. I was clearly a subversive.

These four absences plus the 17 days I wanted to take off to tour Europe with the choir—well, I’d had enough college algebra (an honors course all the anarchists enrolled in) by that point to know it all added up to something, like, more than 20.

Thus, I found myself on the horns of a dilemma.

My family’s first recourse was to petition the school board and see if an accommodation to 21 days could be made for me, noting that my “extra” absences had been school-related. After not-much deliberation, though, the board announced its decision, which read, “If we make an exception in this case, we will then have to make an allowance for any kid who wants to go to Vegas for two weeks with his parents. Petition denied.”

The upside of this decision was that it peeved my parents. They came around to a position I’d long held myself: screw the school.

Trying to find a different avenue, my mom called the college (1-800-COLLEGE) I was planning to attend that upcoming fall. Once she explained the situation and asked, “So, hypothetically, if Jocelyn were to not graduate from high school, could she still show up and do a significant amount of underage drinking on your campus in September?”

The college’s response was, “At our institution, we would give credit for a student going on a trip like the one your husband is leading. We would not penalize that student. Yes. She can drop out and still come vomit in our arboretum this Fall.”

Holy Jody Foster, but hadn’t I chosen the right college? I squealed with delight and began packing my bag for Europe.

It was a great trip. Our tour group had a bus driver named Animal, like the Muppet. We had a tour guide named Michael, he of too much cologne and calculated charm. 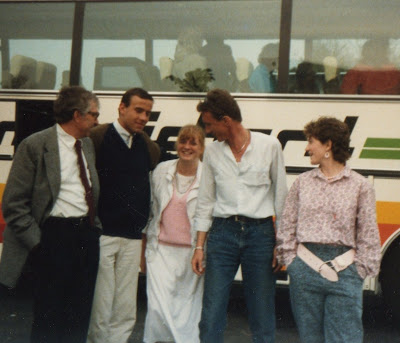 (The line-up: my dad; Hugo Boss-Scented Michael; Totally-Rad Jocelyn; Gold-Chain Sporting Animal; and a Wyoming Lass named Lori [back in high school, in what no-doubt remains a seminal life moment, she sang “Desperado” to her senior class at their prom])

until I attended it, alone, after returning from the trip. I sat by myself, in the highest row of seats in the huge public arena (where I’d rocked out not only to Rush but also to Black Sabbath fronted by—yea, baby—Ronnie James Dio), and I felt,

I felt sad and disconnected from something that was supposed to mean something.

Then I realized I was wearing a skirt I’d bought in London and that feeling apart and alone one last time during my high school years was fitting.

As it turned out, my personal graduation–way up high in the rafters there, with the ink still wet on my passport (cheap Eastern European stuff never did dry)–more accurately reflected what high school had been than any formal ceremony ever could have. As I sat there, listening to the tolling of my classmates’ names, it was right that I viewed the pomp and circumstance from a distance, the physical space signifying an emotional one I’d felt for years.

Certainly, I had moments of melancholy as I sat in the upper tier that night (Row ZZ–Top!). But burgeoning underneath my disaffection was a liberating sense of glee as I realized that,