Praise the long-armed reach of absentee landlords (take that, Ireland!): the bohunk renters across the alley have been evicted.

After my earlier post about these five college lads’ disruptive partying tendencies, things got worse.

They hit a new high the night that Phat Boy Renter and his Li’l Blondie girl sat outside the house in her car, blaring country music at 17 on the volume dial, drinking beers (the trunk of empties clanked resoundingly each time they finished swigging, got out of the car, tossed the bottle into the bottomless well of its peers, and grabbed another. During this process, a song entitled “Marianne” thumped again and again, hammering out a psychosis-inducing tattoo. On its third go-round, I was certain that, no matter what Marianne had done to earn the gullible singer’s admiration, Bitch Stole My Chips).

Every fifteen minutes or so, to spice up the potential monotony of “drink a beer/toss the empty/ grab a new one,” Phat Boy Renter would lurch out of the car, half-filled bottle in hand, and stagger off to pee in the yard. At one point, another of the renters, this one named Dimwit, pulled up with his girl, and they, too, remained parked outside the house. Dimwit and His Girl were in the middle of a fight, apparently. At one point, Dimwit slammed out of the car and ran down the alley, causing Phat Boy and Blondie to jump out of their car, with Phat Boy chasing Dimwit and Blondie hopping into the second car next to Dimwit’s Girl. Much drama played out before Dimwit eventually meandered back home, twenty minutes later, and retrieved a sleeping bag out of the trunk of his car. His Girl had already taken her sleeping bag from the trunk and gone into the house, but Dimwit took his bag and went and slept on the lawn. (pssst, fellas…a little tip here: you’re paying money to have access to that house; you should take your drinks and sleeps inside the damn place)

All the while, Phat Boy Renter and Blondie counseled and consoled and hit the trunk for fresh beers and kept the tunes a’throbbin’, teaching the entire coulda-been-sleeping neighborhood comprised of young children, pregnant women, and solidly-employed types that–get this!–life is a highway, and those crazy college kids were going to ride it all. night. long.

I witnessed every subtlety of the drama, watching it from my back porch that night, where I lay on the couch, wrapped in a fleece blanket, shivering, yawning, muttering my own private commentary about their ongoing monkeyshine.

From my seat in the loge, all the world was The Renters’ stage from roughly 1:30 a.m. until 3 a.m., when I finally passed out into sleep. The cops, whom I’d called at 1:30 a.m., had still not arrived, denying me the much-hoped-for pleasure of seeing each blockhead receive a “drinking as a minor” citation. As I waited and waited, I wanted to huff around about how the police certainly weren’t doing their jobs that night, but the fact that my city swells by approximately 25,000 college students each August kept me sympathetic. It just might have been, at bar-closing time on a Saturday night in September, that the cops had bigger Alpha Tau Omegas to fry. Eventually, perhaps as the sun rose, Phat Boy and Li’l Blondie and Marianne, hissing, shielded themselves from the light and relinquished themselves to hangover-inducing sleep.

As they do, even when one is fatigued or hungover, the days and weeks passed. The renters, already in possession of one dog, brought back on board the ceaseless barker (of my previous post on this issue). The freshmen dunderknots drank nightly, smoked and called each other “faggot” twenty feet from my children at play during the daylight, and generally brought the vibe of Age 18 Hollister to our gentle neighborhood of Middle-Aged Coldwater Creek. Their antics made it increasingly hard to remain stuffily removed.

But then.
The landlord called.
From Arizona.
Just to check in with us.
To see if everything was going okay.
Ever since he’d given the striplings a cell phone lashing after their inaugural party some weeks before.

Sometimes I have a lot of words. So I used them.

He did okay with the part about “Marianne” and my calling the cops. Clearly, he had never heard “Marianne,” or his outrage would have been more immediate and palpable.

However, when I mentioned the dogs, old Tuscon Tom snapped. DOGS? DOOOOOOGS? DAAAAAAAAWWWGGGGSSSSS?

Seems there was a little clause in the lease that mentioned the words “castration,” “hobbling” and ultimately “eviction,” should any animal ever enter the premises.

Clutching protectively at their ‘nads and ankles, the lads got their notice. They had two weeks to get out.

Two weeks and three days later, they started packing. The whole moving process was like a Three Stooges movie starring Robert Downey, Jr., Kiefer Sutherland, and Judd Apatow, featuring a guest appearance by Mickey Rourke (Fifth Renter was noticably absent from the proceedings, no doubt drowned in a fifth of a different sort near a bus stop somewhere)…

what with Phat Boy’s only contribution being, inexplicably, to deposit a pair of shoes onto the side lawn–perhaps to mark the spots where he’d drunkenly peed;

Dimwit dragging out various pieces of his possessions to the car–all of them jammed inside a sleeping bag;

Kyle clambering into the trash can in an attempt to stuff in just seven more pizza boxes;

and Joshua fumbling through the long-empty packs of smokes that littered the driveway, seeking out one last puff as he sat on the cooler and considered the asphalt, for quite a very long while, before slowly standing up.

Eventually, after they’d all worked really, really hard, in the fashion of Paris Hilton making her own way in the world, they hopped into their cars and drove away, crashing into whatever unsuspecting neighborhood will be saddled with them next. Call Mommy! Call Daddy! America’s Best had not only lived on their own for the first time; they had also moved out of a place, all on their own, for the first time!

But what they had failed to do, for the first (and certainly not the last) time, was reclaim their security deposit. For three days after their departure, a cleaning lady scoured the place, a handy man came in to repair the holes punched into the walls, and a carpet dude came to pull out the rugs and put in new ones. And that was just the inside work. Here’s a little math problem for you, College Boys: 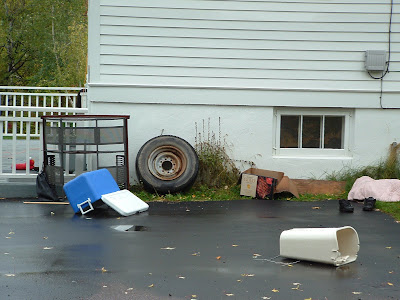 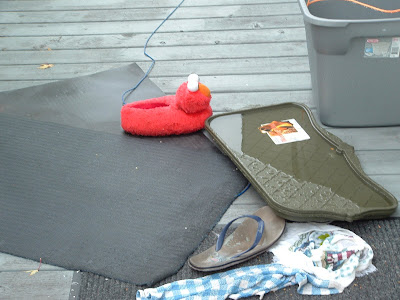 That crying Native American there? It’s probably for the best that, at the close of this commercial, he stepped out into speeding traffic and was taken down by a mail truck. Had he survived, he’d have needed a full-on box of Kleenex Aloe Vera and a whole new treaty struck with the White Man’s King after looking down into the ravine next door to the now-empty rental–

a ravine, curiously, where the creek was newly dammed

furniture that had spent the previous three days perched outside, on the porch of the rental, mysteriously “disappearing” (with great ruckus at midnight) just as the knucklebutts left for good.

Suffice it to say, there were more phone calls: to the landlord, to the delinquents (who swore they dinn’t know nuffin’ ’bout birthin’ no babies, Mizz Scarlett!), nearly to the cops. They were given two days to get the furniture out of the ravine. It was out the next day.

And left there, next to the ravine, on the sidewalk.

At this point, while I was still gunning for police work and enormous fines, the beleaguered landlord discovered his inner Native American and decided that instead of continuing to fight past exhaustion and nearly to extinction, he would, in the interests of self-preservation,

step back, let the feckless bastards move on, give them ample time, and feel secure in the knowledge that

the idiots will eventually hang themselves in a web of their own weaving.