Gasping, flailing, wiping gunk from my eyes, I’m surfacing, turning my face up from the mass of research papers that has consumed my energies in recent days. Students have told me that Americans are obese; water is scarce; language is overly casual; music should be freely downloadable; smoking bans are good; coral reefs are dying; modern animation rules; and BPA might be dangerous.

Slap my knee and call me Tiffany, but I’ll be damned if they’re not right.

Yup, I’m swimming along with their opinions, gliding through the pages, occasionally taking a break to stand up and keep rice-sized blood clots from forming in my legs.

And when I stand up, I look out the window. Well, shitbam.

Somebody put nine inches of snow out there and shut the town down when I wasn’t looking. Here I just gave Krystal an “A” for hepping me up about global warming, and during the grading, the Abominable Snowman sneezed and shook his dandruff on the house.

Easily, my grading break lengthens from a leg shaking to out-and-out abandonment of duties. I not only need to prevent rice-sized blood clots from forming in my legs, but I also need to prevent student prose from clotting my brain.

Clearly, it’s time for us to strap things to our feet. 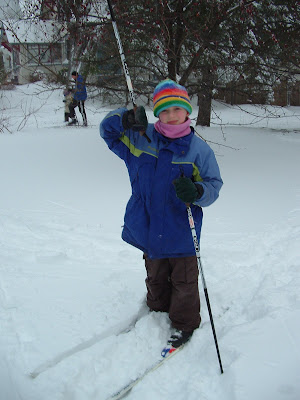 This one is eight. She’s a better skiier than I.

In my defense, I’m only six on the inside. 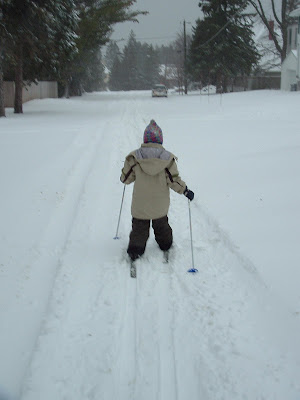 That one there is five. I urged him to jump into the street and notify any passing eighteen wheelers of his presence by waving his poles around wildy should they bear down on him. 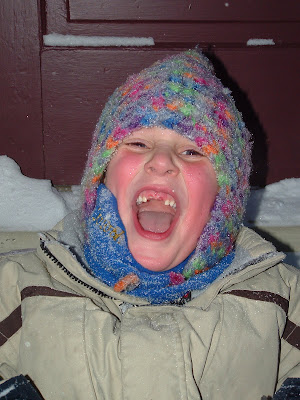 I cannot convince the obstinate lad to ask for his two front teeth for Christmas. He’s all, “Who even cares about toofs, Mom? I want some Star Wars legos. Santa can keep the buckers.” 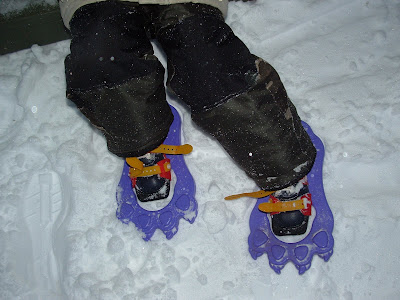 When skis get tiring (sort of like the continuing speculation about Katie Holmes’ tense friendship with Victoria Beckham), we move to the bear claws. My tastes being more refined, I often attach French crullers to mes pieds. 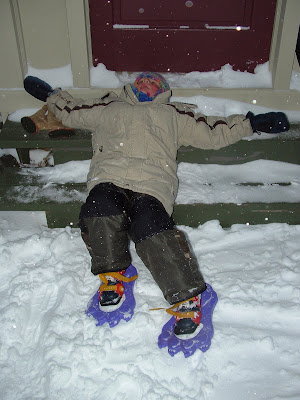 After an hour’s romp, Niblet is more than ready to “act like Mommy grading research papers.”

Inspired by the drama of his body language, I head back inside and bring my computer out of its hibernation.