Once I finished college and graduate school and poked a toe into the frigid air of that fabled place called “real world,” I realized that it’s hard to make new friends when they’re not stuck next to you for 16 weeks in Psycholinguistics; there’s a natural flow towards beer and conversation when class is over, but if there is no class, then it’s just you and beer and silence and not have flow. Connections are easily made when you’re comparing $600 bookstore receipts with your peers; they are less apt to happen some years later when you’re comparing insurance information with the person you’ve just sideswiped in front of the Juan More Taco on Main Street.

Indeed, when you’re in that post-educational phase of life called “work suck junk,” it’s a challenge to find new BFFs, to find kindred spirits. In my job experiences–with a few notable exceptions–I have been surrounded by people who take professionalism seriously; who believe meetings are a place of productivity; who feel everyone should sign a card for Joe when his mom dies, even though they’ve never actually spoken to Joe, outside of asking him to pass the staples when they’ve been “shopping” in the supply closet at the same time. In short, I’ve been surrounded by people with whom I have very little in common, outside of our need for staples. Of course, there is a certain amount of forced conviviality, a few slaps on the back as a display of collegiality, the occasional soft moment over a Ziploc bag of celery sticks at the little refrigerator in the lounge…but the truth is that, at the end of the day, I don’t necessarily want to hang out with people I know simply by virtue of having the same employer. And, quite rightly, they shouldn’t want to hang out with me. Cuz, hell, baby, I’m not always the nicest W-2 withholder in the room. If they need to run away fast, it’s completely understandable to me, and I’m happy to give them a starting shove.

Imagine, then, what a rare bit of bliss it is to encounter a colleague with whom I genuinely click, with whom I can be my genuine overblown self. Up until this past semester, I had only two folks like that on my campus, two folks who can tolerate my pissing and cackling and scorching and chortling, and they don’t blink. But suddenly, I’m finding three is the magic number.

Three is named Gretchen, and she’s livened up my life a bit this last month, sharing stories of unbelievable students, having my family over for dinner, introducing me to limoncello, abetting my habits of gossip and swearing, and giving me the warm feeling that comes from having a new friend around whom I can use the word “anus” and not, upon seeing her astonished mug, have to suddenly pretend I was just randomly naming parts of the body because that’s what I do from 2:58-3:00 p.m. each day.

So I have a new galpal, and I have been liking her. But lately, I like her even more, and here’s why: she’s got killer interesting kids. Evidence of this is contained in the photos below. Gretchen recently had her birthday, and on that special day, her eight-year-old son, Oscar, slipped a card into her bag, a little something he’d picked out just for her.

It was one of those musical cards, so sing aloud the song “Good Love” as you look at the images, starting with the envelope: 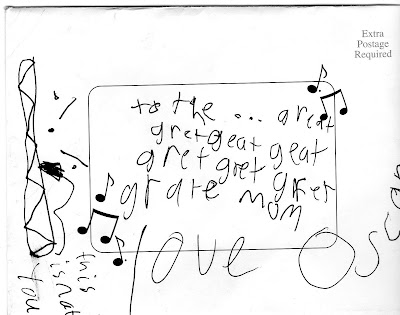 …proceeding to the attention-getter: 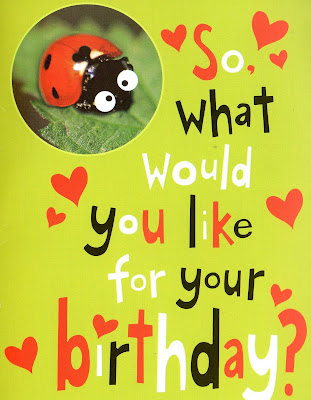 …and ending with the HIGH-larious, completely-inappropriate, but ever-so-dear-because-it-shows-that-although-he’s-a-behavioral-problem-at-school-he’s-still-innocent punch line: 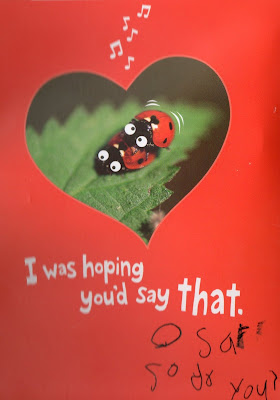 Like she won’t flash this bit of memory lane on him some evening when he’s fifteen and has his buddies Doug and Cal over for a gaming marathon?

Dwarfing the birthday card, however, is her family’s Christmas card, which will adorn the magnet board in our kitchen for some months to come: 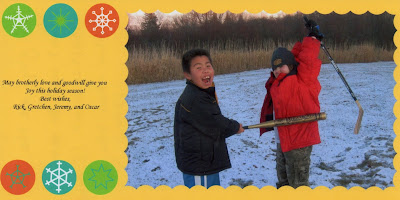 “May brotherly love and goodwill give you
Joy this holiday season!
Best wishes,
Rick, Gretchen, Jeremy, and Oscar”
————————————

Well pleased with the past year and its new friendshipial developments, I’m ready to move on and face 2009. Where better to start the year than California, where mudslides and wildfires seem a reasonable compromise to having the entire state break off and slide into the Pacific?

Between now and January 5th, we’ll hit the L.A. area to visit my mom (with side jaunts to San Diego, Palm Springs, and Pasadena).

And who knows…even though I won’t be attending college there, it seems possible that I could, maybe, possibly–

After all, even killer whales have anuses.