Underneath the Driver’s Seat of the Mini-Van

This post is just that: a heap of random crap that I can’t be bothered to clean up. See it’s my Spring Break week, which means my five remaining brain cells are off duty. They’re in the Dominican Republic, lying on cabana chairs, sipping Trujillo Wallbangers, leaving behind only the shell that is my body.

Here’s what my body has been occupied with this week:

1) Going on walks and hikes with Groomeo, which we can do since THE KIDS AREN’T ON SPRING BREAK THIS WEEK LIKE WE ARE. And that’s the best invention ever. Three times now, Groom and I have completed sentences to each other in something resembling conversatin’. I even learned his middle name and that he reads the newspaper!

Speaking of Groomie, and typing about him feels like speaking about him since it all comes back to the voices in my head, he just had his final follow-up appointment after starring, against his will, in the reality show called Vasectomies Gone Wild. Since His Nibs had been advised not to do any impactful exercise until the swelling goes down–and since, almost seven weeks out, the swelling isn’t entirely down (Sometimes we play a little coochicoo game where I scratch him behind his ears and ask in an overbearingly syrupy voice, “Who has a testicle the size of a chicken’s egg? Who has a testicle the size of a chicken’s egg?”)–well, he hasn’t been running and has missed that outlet dearly. Thank heavens he still has the drink.

At any rate, the urologist, who again complimented Groom on the “impressive” hematoma he brought into the ER back in January, says it will probably be another two months before the swelling finally abates (what better time than now for him to join the ballet and capitalize on those assets, I ask you?), if it does at all. Ever. As in, he also noted that the one chicken-egg testicle could stay that way permanently, dismissing it with a, “You might never hang the same way again.” If that’s the case, I think Groom should start walking with a cane–or maybe pushing parts of himself in a wheelbarrow–so that he can explain to everyone who inquires that he has to because he’s so prodigiously hung.

On the one side.

In fact, in addition to us going for walks this week, we also went to yoga for the first time in eons, and His Groomishness actually couldn’t do Cobra because of his crazy man hump.

This isn’t Groom. It’s a guy trying to find his missing contact lens. It just so happens he’s using cobra pose to hoover the room as he searches.

2) During this Spring Break, my ears have been very busy listening to Gary Paulsen’s HATCHET. As much as possible, we listen to books on CD whenever we’re in the car, and I love that Niblet is old enough now that we can listen to YA fiction. Last month, we listened to MY SIDE OF THE MOUNTAIN, which I hadn’t read since I was about 10. Now we’ve been listening to HATCHET, another tale of wilderness survival, and pretty much any time we get home, Paco and I end up sitting in the car for an extra ten minutes, just to hear more. I love hearing about a shivering 13-year-old boy who eats turtle eggs to stay alive, especially when I’m snug in a parka and heated car, my belly full of granola and yogurt.

3) My full belly has also been warm because I’ve recently tapped into the glory that is the sweater coat. Thinking that one had to be either tragically raggedy or extremely well-groomed to pull off such a garment, I’ve always avoided them. However, I grabbed one off the rack a few weeks ago, my attention snared by the 80% off price tag, and now I’m addicted. I went back to the store last week and dove into the clearance racks again, emerging, tousled and breathless, with two more in my arms. (Incidentally, doesn’t this sound rather like some women in their quest for multiple babies in these modern times?)

Don’t get me wrong. I don’t necessarily think I’m rocking the sweater coat look. I haven’t actually worn one in public. But in our 56 degree house, I am, for perhaps the first time in months, warm. I love my sweater coats so much that sometimes I lick them when no one’s looking. 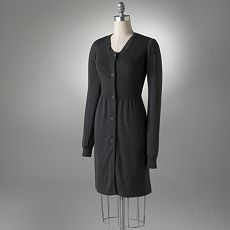 This isn’t me. This is a mannequin trying to find its missing contact lens.

4) Because even a billowy sweater coat can’t cover every sin (Hey, don’t you want to start yowling “I Have a Coat Of Many Colors” from JOSEPH AND THE AMAZING TECHNICOLOR DREAMCOAT right about here? Especially if you’re singing it as though you’re Donny Osmond when he starred in the touring production and was feeling a little bit Fabio but not even a little bit rock ‘n roll?) 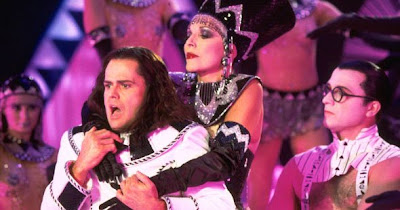 …so, yea, okay, since my sweater coats don’t provide complete coverage, I’m using a food journal and actually tracking every bite that goes into my mouth. The point is to get a little bit more aware of the nutrional value of everything I’m eating so that I can shove myself towards better choices.

The truth is, though, that food journals should just be entitled PATHWAYS TO DEPRESSION because pretty much, you can eat 5 strawberries and 4 celery sticks and be at 1,500 calories. Food journals are high-glycemic suck on a rice cake.

5) This week off of work has also been devoted to lining up large expenditures. After many agonizing years, members of my family are just starting to get some of the inheritance money from my grandma and dad’s estates. To say it’s a long story would be like saying Paula Abdul has a little bit of a problem when it comes to picking outfits. 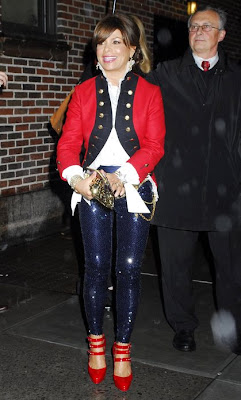 Clearly, Paula is missing both of her contact lenses and cannot see her reflection in the mirror.

At any rate, we are experiencing–gasp!!–an influx of some money, and so this week has been devoted to lining up roofers to replace the moss-covered shingles; to scouting out our first-ever non-hand-me-down couch (oooh, and also a chaise lounge, I hope, if we can make it fit…but then I’ll need a smoking jacket, right? Then I’ll need a pipe and some scotch and an ingenue to seduce and then and then and then…); to meeting with a design/build team about remodeling our kitchen. As it turns out, inheritances, like salaries and the love of a good man, never stretch as far as you’d hope. 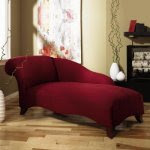 6) Instead of staring at students and online classes this week, my eyes have been peering into lightweight fiction, the kind that doesn’t require my five vacationing brain cells. Specifically, I read OUT-TAKES FROM A MARRIAGE by Ann Leary, and it was only when I was halfway through that I suddenly realized Ann Leary is the wife of Denis Leary, comedian and star of tv’s firefighter drama RESCUE ME. Her contract with Random House is unrelated to that fact, I’m sure.

Just like Kevin Federline’s rapping success wasn’t at all dependent on his wife’s clout. And how Matthew McConaughey’s girlfriend is a really talented purse designer.

I’ve also been reading Candace Bushnell’s new book, ONE FIFTH AVENUE, and have found myself taken aback that one of the characters in it is a young woman who moved to New York City because she loves SEX AND THE CITY and wants to be Carrie Bradshaw and, well, I kind of have to holler at Candace Bushnell, “Can you DO that? Can you write a book like SEX AND THE CITY and then, after it’s a big success, write another book in which the characters are motivated by the iconic series you spawned? Really? You CAN?”

I dunno. But I am pretty sure that if even three of my brain cells come back from the DR alive, I’m going to have to lay off the chick lit.

7) Lastly, and certainly most attractively, I’ve been fighting off another flare up of the damn ringworm that has built a beach on one my hands. The patch is consistently there, but every three weeks or so, it gets bumps on it and becomes crazymaking itchy. So right now I’m trying everything at once: an anti-fungal cream, Head and Shoulders shampoo (the active ingredient of which fights off all kinds of tinea), and wild spritzes of fast-actin’ Tinactin.

Crunk it, but nothing’s helping.

The good news about living in Minnesota, though, is that any itch that plagues you during Spring Break is overshadowed by the lower back pain from shoveling.

how productive days can be without the drain of work, random downloads, Spring Break