She Ought to Be in Pictures

Nine years ago, a piece of my heart started to live outside of my body. Or, as my pal Pammy puts it, “Having children is like being held hostage by the world; you’ll do anything the universe demands to assure their safe passage.”

Girl slides safely out of my passage.

In her first year of life, she slept in her own vomit on New Year’s Eve (more killer parenting tips available soon in the paperback release of my book If Baby Is Still Breathing in the Morning, Then You ARE a Good Mommy, No Matter What Social Services Tries to Report), which burned the skin off her cheek… 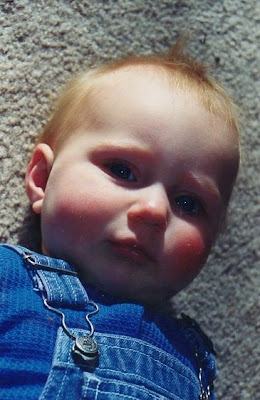 …perhaps as payback for her having screamed for eight hours one night at a campsite in Yellowstone Park. That night, at 3 a.m., Groom finally bundled her into the car and drove her around the park for several hours until they both conked out at a scenic overlook. To this day, the words “Norris Geyser Basin” are synonymous in our household with “that could not possibly have sucked more.”
——————————

A year later, she was heading towards two:

Pigtails kept the hair out of her raging double ear infection. And after three nights of no sleep for anyone, we ripped those ruby slippers off her feet and stuffed them right up the Tin Man’s rusty, er, tailpipe.

Then she was two: 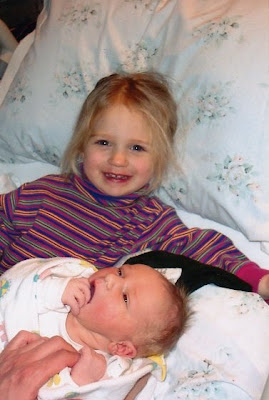 The transformative event of her life happened, and her vocation–no, not playing slots at the casino–was discovered. The arrival of Baby Brother Paco/Niblet gave her a purpose. She continues to serve as ballast to his tipsy keel.
————-

After she hit three: 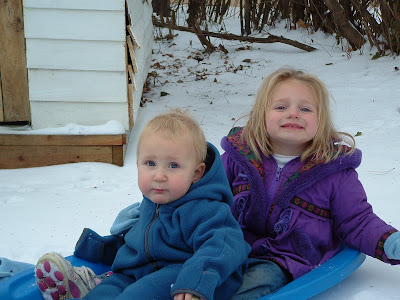 Part imp, part back rest, she twirled and cavorted, sold us plastic food at her grocery store, changed outfits 17 times a day, and slept through the night for the first time. 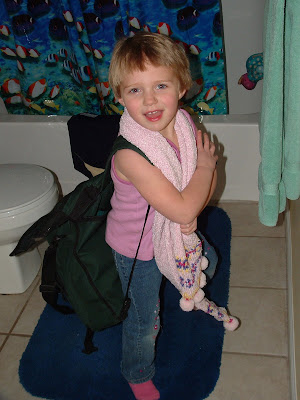 Under threat of, “Either hold still and let me brush your hair, or we’ll snip it into a no-maintenance pixie cut,” she announced, “I think we should cut it, then, because I don’t have holding still in me.” 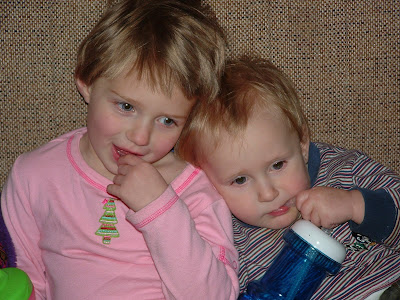 …unless Lawrence Welk was on, and there was polka-ing to be done. Then, as she jumped up to dance, he could fall with a thud, for all she cared. 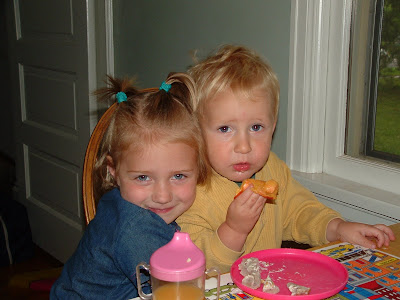 Her demonstrative love interferred with mealtime… 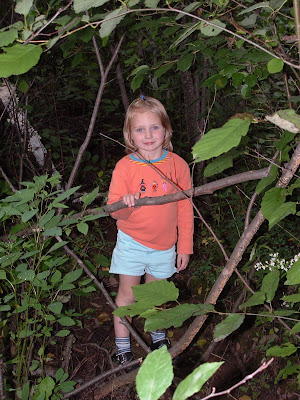 She was six, and: 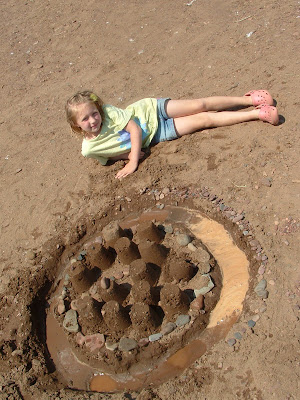 She built a town in Canada… 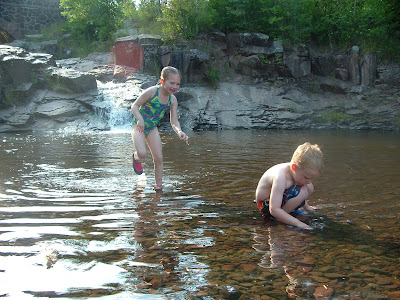 and crept up to “boo” her harem of one. 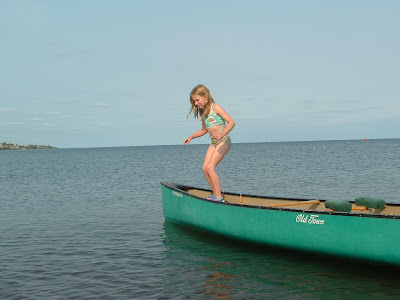 And she was all courage, 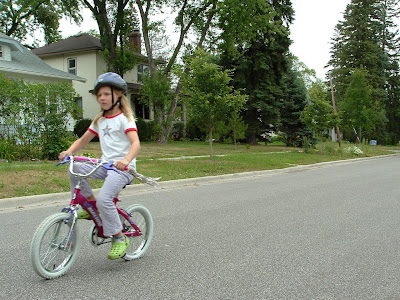 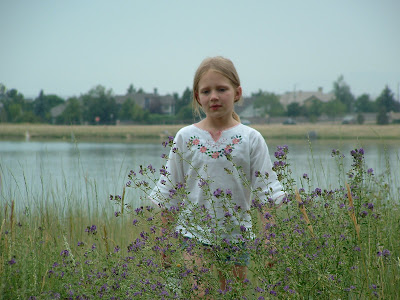 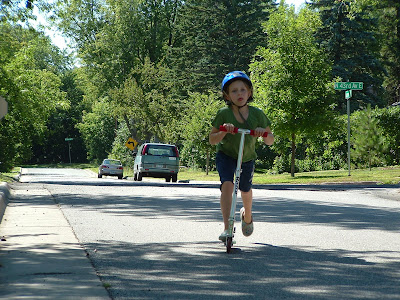 a year of honing balance, 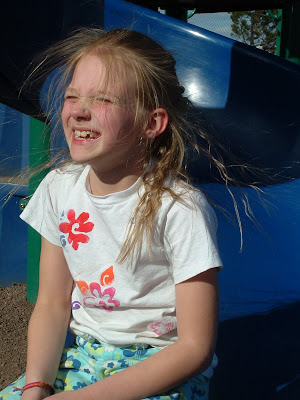 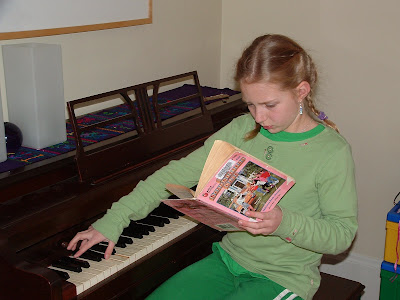 and mastering the absorbed arpeggio.
—————-

And now she is nine: 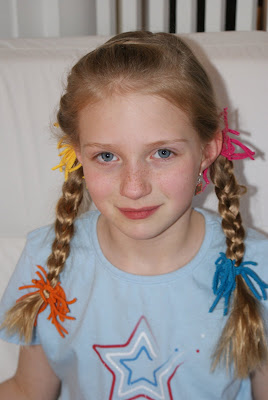 …the embodiment of lovely.

The baby who didn’t sleep is now a girl who checks her alarm clock through the night, lest she miss her bus.

The toddler with an ear infection swims laps, makes assists on the soccer field, monkeys around the jungle gym, and jumps rope backwards.

The delighted two-year-old who held an infant brother now chooses his clothes and gets him dressed before leaning to me and whispering conspiratorially, “He’s in a bit of a mood, isn’t he?”

The wee elf of twirling and clothes changes now monologues, “I’m not so much of a fashion girl–not that liking fashion is bad; I just don’t care if my clothes match.” A breath later, she asks if we can go shopping for ballet flats and notes that if Paco wants some, too, he should get some, perhaps a shiny, metallic pair.

The pixie-ish preschooler treasures long tresses and insists, “I read in an American Girl book that a ‘sleeping braid’ will keep the knots out.”

The solid, loving kindergartener still carries her brother from room to room and brings him bandaids. At school, her teacher chose her from the class for the Citizenship award while we all marvel that she jotted down “misspell” correctly on her weekly pretest, when no one else did.

The first grader who built and crept now studies maps of Stonybrook, Connecticut, the fictional town of the Babysitter’s Club series, quizzing me nightly on which is Mallory’s house. She no longer scares anyone–unless it’s 7 p.m. on a Monday, and she’s just home from Girl Scouts and has four pages of homework but would rather do somersaults in the living room. Her mood teeters on a ledge, and Kleenex may be needed.

The courageous, capable, unflappable seven-year-old continues to impress. I am ageing easily, knowing that she will one day be handling my estate and shunting me into the best of homes. What’s more, I feel certain she will bring me ham for dinner on Sundays, if her career as an Event Organizer doesn’t offer a conflict that week.

At eight, she had found her center but tipped occasionally towards goofy and abstracted. Indeed, we still have to ask her, when she gets the giggles, if she needs to hit the bathroom, lest she require a change of underwear. Her reading habit continues to demand feeding, which is a delight–and, surprisingly, a despair, as she sometimes leaves her best playmate craving the sister who used to entertain him for hours. Mournfully, he will call out her nickname, “DeeDee, don’t you want to play Animal School?” to which she’ll respond, only half listening, “After I’m done with this book.”

Ultimately, all of this means that she is more and more a whole unto herself–a distinct thread in the family fabric rather than an indistiguishable part of the larger weaving.

At times, this can feel like a loss, as though already we are experiencing an unraveling.

Mostly, though, her increased demarcation allows me to see her better; were she completely enmeshed, I would ascribe to her my own traits and view her as sharing my color and texture, missing so much that is uniquely her and not me:

her vividness
her poise
her confidence
her sound judgment
her certainty

her purity of soul 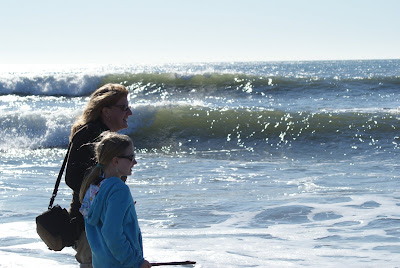 Thus, I live with a piece of my heart–nine years old now–next to me, not in me,

and I cannot fully express how blessed I feel to release her into the world.

25 responses to “She Ought to Be in Pictures”