On my first day of college twenty-four years ago, I heaved into my arms a laundry bag holding Kermit the Frog (a stuffed version, mind you; the live one was on location in Hollywood), Howard Jones cassette tapes, and aerosol cans of Aquanet. A bit tremulously, I walked into my freshman dorm.

Naturally, the dorm was located on the far outreaches of campus, and my room was on the top floor, farthest away from the main doors. Any exercise I got in the ensuing nine months was due to the trek I had to make to get back to my room (or from the repetitive elbow lifts associated with hefting a beer).

That first day, though, because the dorm was teeming with parents, the college put on the shine a little bit and actually opened up the sole elevator. That one and only time, we were able to step aboard with our heavy loads and enjoy the quick trip up four floors. Once the last parent drove away at dusk, however, the elevator was shut down with a clank.

As my laundry bag and I stepped into the mythical parentally-inspired elevator that day, I joined another nervous-looking student and her handlers. Small talk set in, and my fellow student, one Shannon, asked, “So are y’all from Minnesota?”

This person had a Southern accent.

I was going to be attending school with students who were, like, cosmopolitan.

By extension, this meant I, too, was glamourous and cosmopolitan, kind of like how my shoulder pads always felt just a tidge bigger when I watched Joan Collins on DYNASTY. It was glamour enhancement by association.

As the weeks and months ticked by, my first impression was born out: not only did Shannon have a Southern accent, but she also had attended a private girls school (just like Phoebe Cates did in 1983’s PRIVATE SCHOOL!! It was so handy to have seen a movie that gave me insight into the realities of Shannon’s life before college: clearly, her days had been full of handsome lads–like Matthew Modine–from the neighboring boys’ school playing cross-dressing pranks on the girls, all to a soundtrack of Rick Springfield and Bow Wow Wow!!!); even more, when not engaged in peeping shower scenes to the tune of “I Want Candy,” Shannon had actually been part of debutante culture and knew what the word “cotillion” meant!!!!! Holy exclamation point, but the girl was chichi!!!!!!

As even more months ticked by, turning into sophomore year, I ended up living in a sextet with ChiChi Shannon, during which time I discovered she was outrageously down home. Certainly, she was from a different background, but most importantly, she was just a girl, moving into womanhood (er, womynhood; any chick worth her Birkenstocks attending a small, liberal arts college in the 1980s would never co-opt “men” into a word for creatures as fabulous, independent, and distinct as womyn). As we made Ramen noodles together, cried about roommate frustrations together, walked to class together, I got it. In all the essential ways, we were the same.

And so college spun on to graduation in 1989.

Since then, I have kept in contact with a slew of college pals, attending weddings and reunions, raising kids in parallel lives.

Shannon has not. In fact, after a few years, she never attended a reunion or had much contact with anyone. She got busy living in D.C., doing things like trying to get medical coverage for children. Nice excuse. So no one had seen her.

Until a few weeks ago.

Then, she—bravely–set foot on campus for the first time in twenty years at our, get this bit of irony, 20-year Reunion.

When I spotted her and launched into the requisite hugging of her body and licking of her face, she finally managed to gasp out, “I’ll never forget that you were the first person I met freshman year. We got into the dorm elevator together, and I knew it was a different world when I learned you were from MONTANA. I mean, wow, I didn’t know people from Montana. I couldn’t believe I was meeting people from Montana. I knew college was going to be something.”

There it was. We were back in the elevator together, open to mutual dazzlement.

That single moment from my first day of college, ultimately, summed up my entire college experience–and continues to sum up why the Reunions are so amazing. A group of smart, talented people, all very different, are drawn together by the excitement, the potential, of mutual dazzlement. And it never fails to deliver.

Invariably, at Reunion, I end up rubbing my eyes with my fists, trying to clear away tears of laughter. Invariably, I end up meeting people with whom I graduated but whom I never knew during college. Invariably, I end up wishing I’d known them all along and that they lived next door to me now–so that I might dash over, ring their bell, and yell “Hold me, College Boy!” when the world becomes too much. Once the embrace would break, a little awkwardly, I’d ask for a bagel. With strawberry cream cheese. If they have it. Please.

But because the magic of Reunion is tied into it happening infrequently (clearly, the excitement of seeing me everyday would wear thin quickly; for one, the cost of cream cheese would add up, day after day, year after year, as, for two, would my semi-creepy insistence on a deep, emotional hug with someone who lives next door and really just wants to mow his lawn), I revel in its intensity, in the spurts of conversation with people who had Paul Wellstone as a professor, who mainlined No-Doz when writing papers, who constructed shantytowns on campus in anti-apartheid protest, who filed into the chapel to listen to Garrison Keillor tell stories.

By Sunday, after three days of conviviating wildly, my heart is full, and I stand back from my life, once again, and can’t believe its glamour: because I am allowed to know such people.

Then I realize I’m hungover and haven’t slept but twelve hours in three nights, and it’s time to go home. Plus, I need a latte. However, for the next few months, whenever the world gets to be too much, I can simply click on the mental slideshow of that weekend, and I will feel the dazzle. 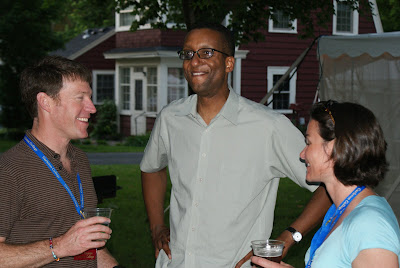 At some point in the next few months, Beautiful Man here and his family will travel to Madagascar to adopt two more children. When my dad died six years ago, this Beautiful Man empathized with my grief. When he was 18, he had never drunk before. We remedied that. Nowadays, he certainly doesn’t drink, but he rides horses. 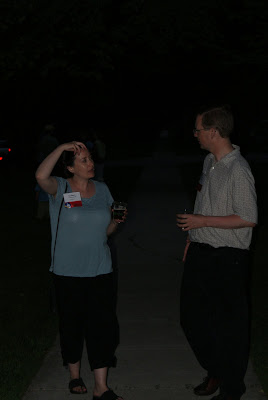 Poopsie on the Left was my roomie through college; I did a semester in Ireland with her; I lived with her after we graduated; I did a reading in her wedding; I learned huge amounts about the world during her divorce; she has, on occasion, held my heart in her hands and kept it from splintering. Five years ago, at our last reunion? She was piecing herself together post-divorce; at the same time, the fella on the right here was imminently divorcing. Now? They’ve just signed the closing papers on a condo in Chicago. 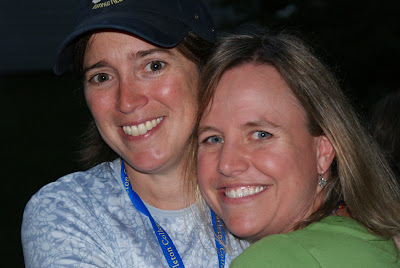 The chica on the left has done everything cool in the world, including living and working in Antarctica; the one on the right is my bestest dance partner ever. During the course of the weekend, inspired by the notion of a BIG LOVE life of polygamy, where we all get to share a communal backyard with a pool, I began suggesting possible Sister Wives to Groom. These two made the cut. The one on the left here could change theh oil in my Mom-Van, which is always a boon in a Sister Wife. 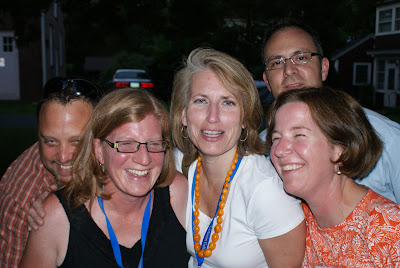 I have no idea what was so funny. But it probaby involved the punchline “Pigfu**er.” 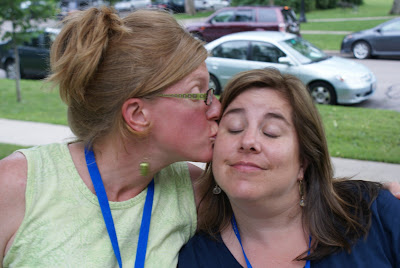 During college, I never did that experimental thing of loving on girls. Good news for the frustrated: twenty years later is not too late to start kissing girls. I know a guy here in town who recently got divorced because his wife realized that very fact. 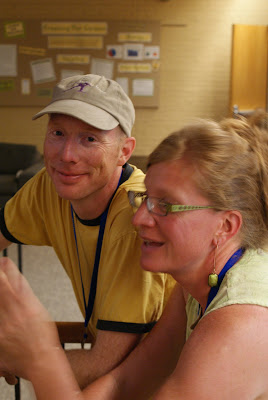 This buddy here is descended from elves and has the best taste in music ever. One of my best memories of him from freshman year is of him walking around campus, a little boom box on his shoulder (not that he couldn’t have managed a bigger one, for he might look lithe, but he is VERY STRONG), listening to The Replacements’ song “Kiss Me On The Bus.” I also remember him pointing out to me, as a fellow Titian, this quote from Gulliver’s Travels: “It is observed, that the red haired of both sexes are more libidinous and mischievous than the rest, whom yet they much exceed in strength and activity.”

You don’t know the half of it, Mr. Swift. 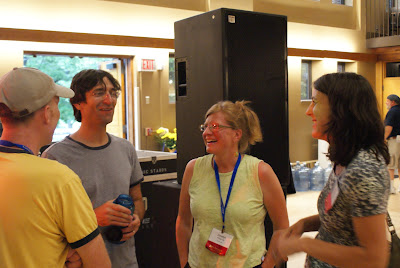 The guy to my right here graduated a few years before I, but he was back on campus with his band to play one night of Reunion. Even my shoulder blades were sore the next day, from the thrashing around. Incidentally, I nominated him as a candidate for Brother Husband. He could play calming music for all 27 kids at The Compound. If he really wants, we’ll even let him be Prophet. 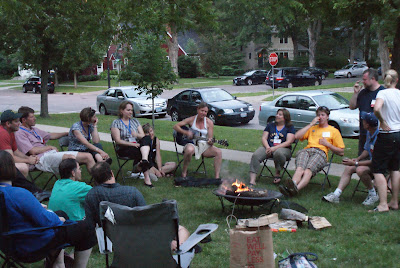 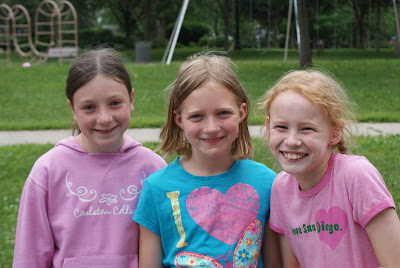 I look at my Girl (in the middle) and two of the daughters of my college pals, and I’m forced to muse: “Crikey. In nine years, they’re going to get on an elevator with someone who has a Southern accent!”

Did you ever notice how 9-10 year old girls really like hearts and pink? And butterflies and San Diego? 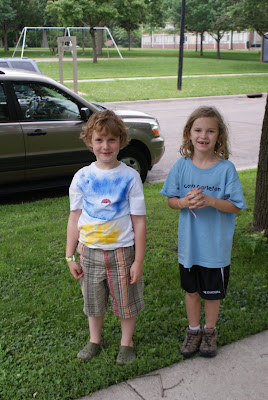 By the time Paco and his compatriot get to college, we’ll be hauling their laundry bags out of our hovercars and stocking their mini-fridges with stashes of Tang and freeze-dried ice cream.

Click. Lights back on now. The slideshow is over.

Time to go to work now–powered by a happy, flowy feeling of gratitude.

Maybe I’ll meet someone with a Southern accent today.

For–as I learned when I was 18–anything is possible.

22 responses to “Can’t Touch This”