Crumbs Under the Mini-Van Seat 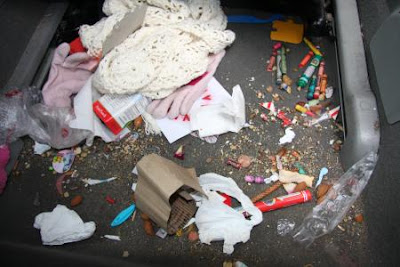 This photo–of someone elses’s trashy mini-van–is one of the few things that makes me feel better about my own.

At any rate, my thoughts today are random, like the crap under the seat of the mini-van. My brain is a jumbled mash of odds and ends:

1) At National Night Out a few weeks ago, we had a big block party. Customarily, police officers and firefighters stop by—part of the whole community-building vibe and all. During the visits, I totally appreciated that my kids actively avoided all officers of the law, refusing to come over for high fives or badge stickers. Such avoidance tactics will serve them well in 8 years, when the keggers they’re at are being busted.

2) I’m sitting and watching Paco’s karate class as I type this. Straight ahead of me is the father of a kid in the class. Every time I look up, I think, “I’ll bet you were pretty attractive in your younger years, Pappy, but right now, you just look bloated and like you drink too much.”

3) Oh, hell. Turns out I was looking at myself in the mirrors that line the wall of the karate studio.

4) Joking. There really is a bloated dad here. If it sounds kinder, I can qualify: he’s only bloated in the face, which looks like it’s still detoxifying last night’s 12-pack.

5) Funny how all the beer went to his face.

6) But he is wearing nice flip-flops, and that’s something.

7) Plus, he is here, watching his kid’s karate class, so that’s something else.

8) I just hope he doesn’t yack. He seems to be fighting the urge.

9) Seriously, he’s gone into the please-don’t-let-me-hurl-in-public zone…you know, the one where you sit up a little bit too straight and pull your chin in towards your neck? My kids will know it well in 8 years, the day after they’ve run away from the cops at a kegger. And I’ll recognize it then, too, and make a pungent scallop stew for breakfast that I ladle out with a dried ox tongue and serve over a bed of ear wax. That should really get them pulling their chins in towards their necks.

10) As long as I’m rambling about kids’ activities, let me trip across the subject of Girl’s soccer coaches this year. I totally think the two doctors-by-day/coaches-by-night guys are to be admired for offering up their time and buying a clipboard and all; however, they both seem very nervous around a herd of 16 nine-year-old girls, to the point that they avoid interacting with the girls the same way my kids avoid interacting with officers of the law. For example, these coaches, several weeks into the season, still don’t know any of the girls’ names except their own daughters’. This REALLY bothers me. Also, they ask the girls to arrive to games half an hour early, yet they themselves arrive a fair bit after that and, without ever acknowledging the crowd of girls standing there in full gear, they have a huddle with each other that lasts until the start of the game.

I’m giving them a couple more nights before I go all Enthusiastic Parent Volunteer on their asses and jump right in, as they huddle importantly in doctors-with-clipboards fashion; while they murmur to each other, “I dunno what our goalie’s name is. You ask her. No, YOU ask her. You ask her. Oh, all right: Let’s just refer to her as Curly Hair Girl when we confab like this and, er, during a game, to pull her off the field, we’ll gesture wildly and yell, ‘Red Team Goalie: Come IN!’; in the meantime, my enthusiastic volunteer parent self will get the girls warming up together—maybe making a circle and kicking the ball around while playing The Name Game, so they at least know the names of their teammates. Of course, once I do that, it’ll be a short step from pairing them to do dribbling and stopping drills, having them practice passes, working with them on scoring goals, to becoming a doctor with a clipboard one day myself.

11) Classes start next week at the college. My lack of enthusiasm for this indicates, if any doubt remained, that I was actually born to be a Manhattan trophy wife who fills her days with Botox injections, hiring and firing the help, and “charity work.” It astounds me how easily I can fill a day with non-workish activities, and the hours fly. But in the face of teaching 175 students (my all-time high, speaking of how lower student/teacher ratios improve the quality of education), I am limp and full of dread, as though I’m about to head into the theatre to watch a buddy comedy called BRAIN TRUST starring Jennifer Lopez and Mariah Carey as former cabinet members (clearly from the Bush administration) who, at professional loose ends, decide to open a detective agency aimed at solving pet-related crimes; this film also features a cameo by Jessica Simpson emerging from the waves in both slow motion and a bikini. Indeed, even before the opening titles of the semester, I’m sitting all slumpy and waiting for the final credits to roll.

12) Okay, the hungover dad just left the studio and is now pacing in circles out in the parking lot, a little too near to my mini-van, if you ask me. On the flip side, the van is so filthy, I wouldn’t actually notice the addition of a puddle of spew.

21 responses to “Crumbs Under the Mini-Van Seat”