Herein My Former Dean and Always Friend, Jim, Gives Me A Guest Blogger Assist During a Week Where I Might Lose My Mind Otherwise

Sometimes helping a friend and engaging in public navel gazing are the same thing. In this case, I offered to write a guest blog for Jocelyn because I know she’s just started school, has all her junk all over the house, and can’t find her Triscuits.

Recently I was remembering an annoying woman I met in college, and how one particular branch of her annoying tree reminded me of the film Slumdog Millionaire.

Her name was Rachel Katz, and I use her real name, because I believe everyone googles themselves occasionally (or, in my case, daily) and should find their name somewhere unexpected. So, yes, Rachel, you were bright and funny and a good dancer, but you were also amazingly annoying. To me, anyway. I’m sure the rest of the cast of Grease that summer at the University of Wisconsin-Superior all loved you. (See, now Joce will get Google hits with many other types of searches.)

Rachel was dance captain of said musical, and I played one of the lesser greasers, Doody. I know; I have been typecast from the beginning as good boys, priests and whatnot. One reviewer, bless him, mentioned my “baby-faced Doody,” which is better than being a doody-faced baby anyday. I was twenty; I looked fifteen; I am now forty-five and look forty-five. (This is what forty-five looks like, as Gloria Steinem would say.) 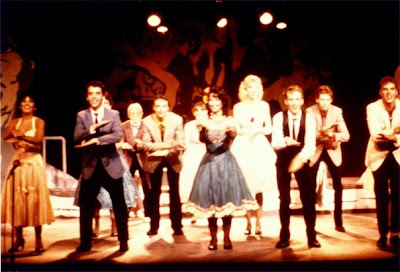 I’m wearing my own clothes (second from left)! That may be Rachel Katz immediately behind me. Jocelyn’s editorial: the gal in the middle looks like Susan Lucci to me; did Erica Caine get her start in Wisconsin musical theater?

One day in the green room a bunch of us were playing Trivial Pursuit. I don’t remember who else was there but probably Doug Ronning, our Danny, who I was crushing on since high school. We were all good in the entertainment category, natch, and it was a close game.

Rachel was in the habit of explaining why or how she knew every answer she got correct. “I only know that because when I was in the fifth grade my mother gave me a scarf that was this amazing color of orange and she told me that it was actually saffron, and it comes from the spice saffron, which is really expensive and you only need a little bit of it in the rice to make it saffron rice, and so now whenever I see that color I know that it’s actually saffron. Plus I really like Indian food, so…” (I’m sure she said “actually” a lot, and her explanations were invariably in the form of the run-on sentence.)

This went on for the entire game. “The only reason I know that is because I was in New York last year and toured the U.N. and so I met the ambassador from Swaziland who told me about the net worth of their exports. So…” I ground my teeth and tried to catch someone else’s eye to share my pain. I don’t think anyone else was irritated, which shows that I was a crank when I was twenty and that my irritability did not come on to me in middle age.

Even then I recognized Rachel’s mannerism as more of a nervous tick than anything else. It was probably a result of being a smart girl in school and trying to minimize that intelligence, making herself more ordinary as if to say, “I’m not smarter than you are really, I just know this because…” Sort of the way smart girls in the Midwest often end every sentence as if it is a question? With a little raise of the voice at the end? (“I know my paper is late? But my boyfriend is in jail? And my mom threw my dad out of the house? And my dad was my daycare provider? So…”)

Rachel had the opposite effect on me, however. Not only did the needless repetition ruin the fun of the game, the subtext of her remarks (the “I’m not smarter than you” part) came off to me as a slight dig at the rest of us, sounding more to me like “I am smarter than you and this is why.”

What does this have to do with Slumdog Millionaire? I’m just getting to that. You’ll recall that our slumdog, Jamal, is a contestant on the Indian version of the gameshow, Who Wants to Be a Millionaire? He’s condescended to (and worse) by the show’s host, who continues to refer to him as a Tea-Wallah. (You’ll have to google that one yourself, it’s fun.) The entire plot of the film is structured around Jamal’s memories: whenever he gets a question right, the film flashes back to his memories of (yep) why or how he knows that particular bit of information.

Thus we get thrilling, beautiful, horrific scenes of Jamal’s life, from swimming through a fecal swamp to get a glimpse of a matinee idol to scamming tourists (and stealing shoes) as a fake tour guide at the Taj Mahal. And he does all this in order to find Latika, whom he refers to as his destiny. “I went on the show because I thought she would be watching,” he says.

It’s a brilliant narrative move by screen writer Simon Beaufoy. One of those I-wish-I-had-thought-of-that moments. So I couldn’t help but wonder, what if I hadn’t just been annoyed by Rachel Katz’s stories but instead had seen them as a creative way to tell a story? Would I have developed my own version of Slumdog Millionaire? Okay, so mine wouldn’t have the lovely Dev Patel and Frieda Pinto, in her long saffron scarf, doing their Bollywood dance in a train station.

And I only know that because…

did anyone find my Triscuits yet?, Grease, guest blogger, Slumdog Millionaire

14 responses to “Herein My Former Dean and Always Friend, Jim, Gives Me A Guest Blogger Assist During a Week Where I Might Lose My Mind Otherwise”