I grab comfort wherever I can find it–

especially at the gym. To ease me through time on the treadmill, I rely heavily on my Ipod (having to hang onto the treadmill’s bar when I am thrust into a “Laugh at The Zany Mess That Is My Personal Taste” moment as my playlist cycles from the thrash of Norwegian punk to the surprising infectiousness of Miley Cyrus’ “Party in the USA.”)

In addition to the music and the handbar, I also rely heavily on celebrity gossip magazines. One one hand, I love encountering stories about beauuuuuuuutiful people who share my birth year (I believe we’re referring to it as being “of a certain age,” ja?) because, by extension, that means I’m not a total loss; indeed, I am heartened by the loveliness and continuing appeal of stars who are my peers–thriving talents such as Julia Roberts, Salma Hayek, and Anna Nicole Smith (hey. wait. a. minute.).

Even more, it’s amazing how the miles fly by as I read about Britney’s dress at the Teen Choice Awards, how that Bradley Cooper manages to break Jennifer Aniston’s heart without ever seeing or speaking to her, and how running burns off belly fat (them is BIG BELLY FAT LIARS, says A Flopping Bit of Firsthand Knowledge named Jocelyn).

The other day, as I inched up towards Mile 4 and kept my feet turning over in rhythm to “Jane Says” by Jane’s Addiction, I came to the end of my magazine (squawk not on my behalf, intrepid readers: I had an US Weekly back-up awaitin’ in the wings).

The last page of the magazine had a profile of legendary sculpted rapper L.L. Cool J. 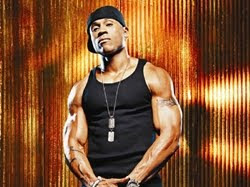 Although, in my life, he’s never been a Particular Person of Note, I have always had the impression that he’s less of an idiot than most of ’em alls in Celebrityville, so I read on. “Well, whaddya know,” methought, panting, “L.L. is only 9 months younger than I! He’s part of my validation-that-I’m-still-viable-because-he’s-hot strategy!”

Three sentences later, he became even more def to me.

You see, the interviewer asked him, “When was the last time you cried?”

And his answer was off the hizzy–it showed undeniably that L.L. and I share points of identification in the world; even though he grew up creating tunes on a mixing table purchased by his grandfather at Sears while I grew up creating Tic Tac Toe games with a Mason jar of buttons saved by my grandmother during the Depression, we shared the same cultural touchstones.

Here’s the thing: his answer to the interviewer’s question was, “I cried when Michael Landon died. I was all broken up; you just don’t get an icon like that everyday.”

That’s ma boy, L.L.! That is what this pasty Rush-loving girl from Montana is talkin’ about to you, darkerish Hip-hop-loving boy from Queens: Mike-ay-el LanDONE!

As I trotted along spiritedly, it slayed me that L.L. clearly had loved those moments when Pa Ingalls would sit with Half-Pint next to the creek and, against the burbling auditory backdrop, give bucktoothed Laura a gentle lesson in pioneer values. 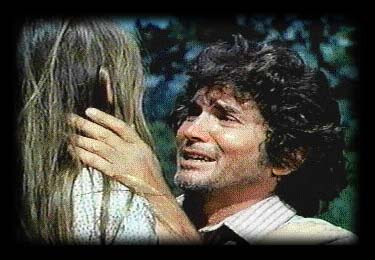 In fact, since L.L. and I grew up during the same decades, he probably even shared my earlier recollections of Michael Landon on Bonanza in his role as that rapscallion charmer Little Joe!! What’s more, L.L., seeming to be a man of sense, doubtlessly knew, with well-developed street instinct, that we don’t say aloud the words Highway to Heaven.

Dudes, nothing had ever made my treadmill time more fun than knowing Michael Landon’s death had caused L.L. Cool J to cry! That was an even chicer clash of tastes than my schizophrenic Norwegian punk vs. Cyrus Ipod battle!!!!!

I was so excited, to tell you true, that I neglected to wipe the sweat out of my eyes for a few minutes there, and I was bouncing around even more than usual due to the running coupled with chortling and savoring the rare awesomeness that was L.L. Cool J mourning Michael Landon.

Clearing my eyes and slowing the bounce, I finally glanced back down at the magazine profile of my newest hero, one Monsieur Le Cool J.

Turns out the words “Michael Jackson” read as “Michael Landon” when a half-focused person is also kicking along to “Party in the USA” and–hahahahahaha–burning off belly fat.

At least, however, I have my answer ready for the celebrity gossip magazine interviewer when he comes a’knockin’:

the last time I cried, you ask?

On the treadmill at the YMCA.

Oh, L.L., you may have been born in 1968, but I hardly know ye. You’re all Billie Jean and PYT and moonwalking, and I’m all cornbread in a skillet and currying the horses and Sister Mary going blind.

THANKS TO YOU, ELL-ELL-IO, NOW I’M HUMMING “Don’t Stop ‘Til You Get Enough,”

even if–actually, because–it’s not sung by that upstart pole-dancing Cyrus girl,