As Henry VIII Would Tell You, Heavy Is the Head That Bears the Seed

My lad Paco is generally regarded as quite tall for his age. On more than one occasion, the drunken college students who rent the house behind us have tossed him their car keys and asked him to be their designated driver. As well, he could trounce all his fellow first-graders in a tetherball tournament, simply because he has the ability to keep the ball a’spinning far above each opponent’s reach. Even better, he’s tall enough to open the medicine cabinet and retrieve his own Valium when the world is too much with him (spelling lists have sent stronger kids straight to Oxycontin).

However, compared to what’s growing out back in the garden, Paco is Lilliputian. 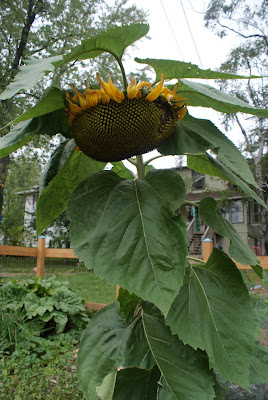 We have cultivated a sunflower so prodigious, it can’t handle its own enormity.

My cousin had a breast reduction for the same reason. 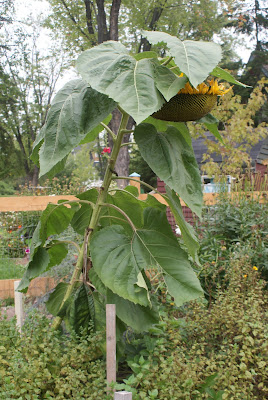 For the last few weeks, I’ve been watching Sunny peak and then begin his gentle decline; briefly, he reached towards the sky, but all too quickly, his frame slanted into a gentle bend of abatement. He is a metaphor for so much, from midlife to sex to friendship to appetite to the new cast members of Dancing with the Stars. 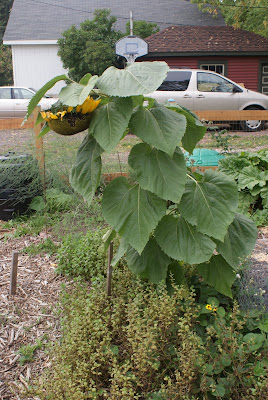 Mostly, for me, Sunny is what he is, though: taking a bow at the end of another season.

kings without male heirs, my freak of a son, sunflowers, you should see the brussels sprouts

16 responses to “As Henry VIII Would Tell You, Heavy Is the Head That Bears the Seed”