Alternate titles in the running for this post were “Doing Our Part to Revive the Economy”; “At Least It Got Us to Dust”; and “So, I Suppose If We Have a New Kitchen, That Means We Should Wash the Dishes?”

Naturally, because my brain is cacaphonous and full of conflicting shouts and yips, I have yet another option: “Some Weeks, I Find Myself All Balled Up Inside Because I Have No Time to Write.” The subtitle for this option would read: “Groom Is Doing His Stint Today as a Newspaper Reader on the Radio for the Sight Impaired, and Paco’s Testing for His Orange Belt Tonight, Followed by a Soccer Game, Followed by a Parent Meeting for Girl’s Class Regarding an Upcoming Trip to an Environmental Education Center, and, Oh Yea, I’m Also Having a Garage Sale This Weekend, and Because My Neighbors Rock, They’re Letting Me Use Their Garage, and That’s So Cool Because Our Patch of Asphalt Could Not Be More Low Rent, but That Also Means I’ve Spent the Last Two Days Not Only Dredging and Pricing but Then Carrying Every Last Damn Piece of Crap the House Is Pooping Out Across Two Lawns–Oh, One More Thing, I’m Also Trying to Find Time to Grade a Passle of Run-Ons Activities, Get to the Grocery Store, and Go for a Sanity-Maintaining Run on a Beautiful Trail Where I Can Smell Some Pine Trees and Remember All That Is Good.”

Adding to the kerfuffle has been the in-and-outing of construction guys and carpet layers (new rug on the back porch, as the old one got trashed during the kitchen work) and the fact that each of them is very chatty and has to ask me if I have a wrench and, inexplicably, an iron. Then I make them mochas and find out they hate their jobs and bemoan the lack of healthcare in this country, and before you know it, there’s another hour I’ll never get back.

Yet, somehow, it’s all a bit of giddy fun at the same time. I kind of like making mochas for people, a skill that could come in very handy, should this teaching gig ever get tired. Mocha-making, coupled with a penchant for random chat, could turn me into Starbucks with personality, friends.

Anyhoodle, as of yesterday, the interior of the kitchen is done (a bit of exterior work remains). And, yes, I know I’ve rather gone on this summer about the remodel and have posted pictures time and again, but since we aren’t so much Christians at our house but more Foodstians, I guess I can’t help myself. It’s like some disciples came and built us a new worship space.

So here goes again: the most recent views of the narthex, the pews, and the altar. 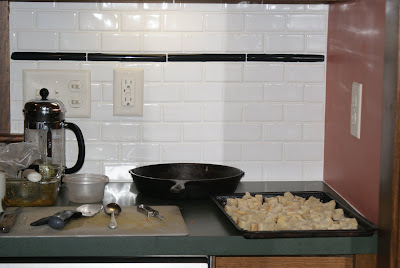 Tony, the tiler, came last week and put in the backsplash. White subway tile is almost as nummy as homemade croutons (which is what Groom’s got drying on the counter there). 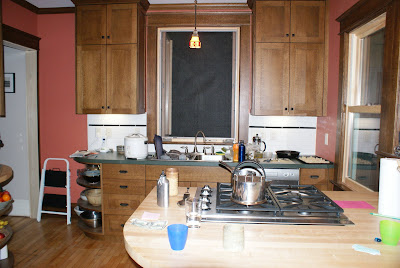 Backsplash from a distance. You can also see a silver-bullet looking flask on the island; I got that for Paco, in an attempt to get him to take a stainless steel water bottle to school. It has a skull on the front, and that has made all the difference. That skull is at first grade today. I think Paco is, too. 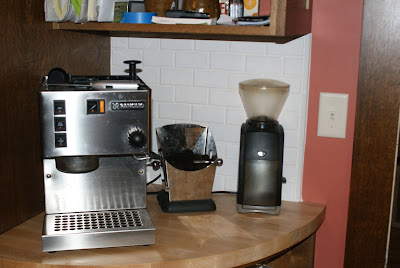 Technically, this would be the altar, methinks. Miss Silva, vixen of the village of Rancilo, has had me on my knees, kowtowing in gratitude, more than once. 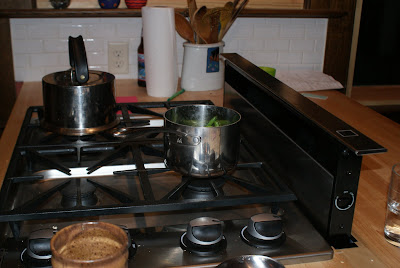 The hood here–with the push of a button–rises majestically out of the countertop. In the presence of such technology, every testosterone-driven being who has come into the kitchen in the last two days finds himself struggling to catch a full breath. Gasping, the individual in question eventually asks, “Can I push the button again and watch it retract? And then push the button again and watch it come up?” 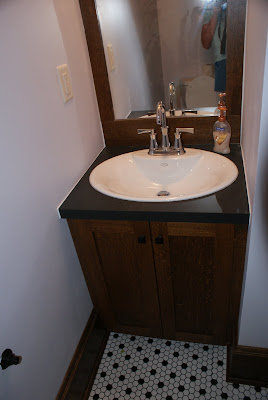 The vanity in the new half-bath has been installed. Get this: when you add another sink and toilet to the house, that means there’s ANOTHER SINK AND TOILET THAT NEED CLEANING.

My antidote for this? Don’t clean. 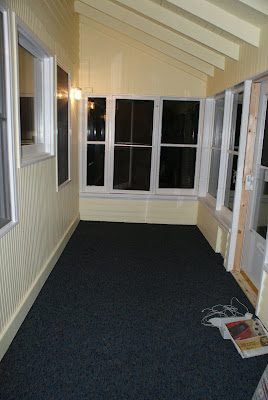 Groom painted the back porch, and then a really sketchy guy who seemed suspiciously tight with his bottle of glue came, cursed a lot, and installed the free carpet (kitchen remodelers paid for it). 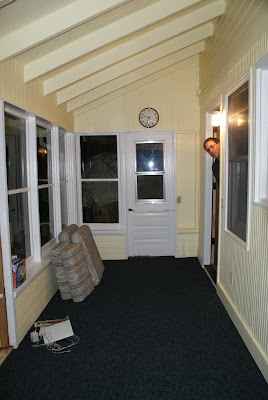 What were you doing at 9:34 last night? I was shrieking at the appearance of yet another disembodied head in my day. The first one had been that of a Barbie (I put a price tag of $.10 on it). This second one looks like Librarian Ken’s, eh? 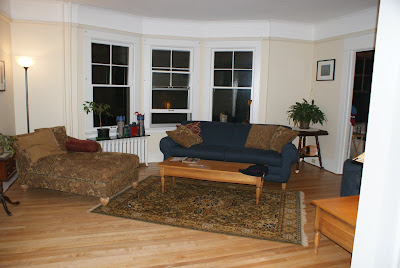 Part of the domino effect of switching up the kitchen was the floor refinishing and–aw, what the hell–a rearrangement of furniture. Most important is the presence of the Playmobil castle on the radiator, of course. 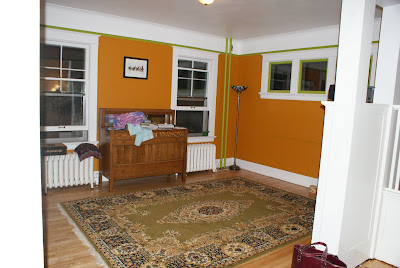 See the heap of junk on the sideboard there? This morning, I carried it across two lawns and tossed it into a garage. With any luck, some poor sod who needs a fleece ballerina blanket will drive through my neighborhood this weekend.

You know, overall, as the various projects start to move towards a close, it’s not so much about “stuff” and “having” and “shedding” as it is the creation of a space–and a house can be synergistic, more than the sum of its parts–that feels right,

a space that feels like a haven from the meetings and kid activities and grading,

a space that makes me want to take Communion.

In my case, of course, Communion consists of Triscuits and a hell of a lot of wine, often sucked straight from the bottle.

I would use a glass.

But with all the household transitions, I can’t find one.