I’m Kind of An Old Woman, and While I Don’t Live in a Shoe, I Believe I Could Cobble Together a Modest Colonial Out of Boots and Flip-Flops, Featuring a Sunroom Constructed of Cleats

Personally, my waters are a bit muddy. I don’t perceive things as black or white, and my moral compass has never tweaked to true north.

Hmmmm. There have got to be a few more metaphor/analogy/simile/personifications I can toss into that confusing mix. Try these: “my integrity shifts with even the smallest seismic activity” and, um, “my moods waft in and out with the tide.”

There. That linguistic mess should have Strunk and White reaching for each other in a darkened library somewhere, seeking comfort, fumbling around for each others’ “ink pens” with their lily-white, uncalloused editors’ hands.

The point is that, due to all the mud and shades of grey and spinning compass needles, I am eminently casuistic and corruptible. If it’s shiny and hanging in front of my face, I will reach up, drooling, and snatch at it.

This tendency proved particularly unfortunate when someone hung a set of Ginsu knives from a maple tree down the street.

It’s not so hard to get by with seven fingers, I’m here to tell you.

Plus, thumbs are overrated.

Anyhow, due to all my suspect internal bidness, I’m a swirling mess of happy-crazy laxity.

And you know how traditional wisdom dictates that, in good relationships, partners complement each other? Like if one partner in a lesbian union owns Carhartts, the other partner in that relationship should have a great toolbelt and a black lab?

Holy Indigo Girls, but I scored just that complementarianship in Groom. Remarkably, despite being an American adult, he has remained, well, pure. Don’t get me wrong: he’s fun in all the important ways. He’ll drink beer with me and cackle when I call our attitudinal daughter a “roiling bag of butthead.” But, overall, he meets the world with a level, steady gaze. In the time that it takes me each morning to hum a few songs from the SHOWBOAT soundtrack and dither about what earrings to wear, his Groomishness has shown up, put in some good thinking, and done the job beautifully–whatever that job may be, from making baguettes to staining windows to biking to the grocery store for a 20-lb bag of rice. In fact, the only negative thing I can say about his performance in a multitude of daily activities is that his ears don’t glitter very much, nor can he warble a single show tune.

Despite that lack, I still gotta love one man ‘til I die.

For, you see, I can’t help lovin’ that man of mine.

Yea, so, as I was noting: Groom is very adept and able and solid and clear and junk. Thus, when he speaks, I pause my yammering and listen up.

One of his greatest pieces of wisdom is something I can agree with, intellectually, yet I just can’t get my heart to follow.

See, he maintains that shoes are one of the evils of the world. We have too many; we don’t need so many; they clunk up our lives; they defy corralling; they are symbolic of all hollow excess. Moreover, they are often expensive and uncomfortable and stinky. In Groom’s ideal world, everyone would whittle his/her shoe stash down to only a pair or two.

The world not being ideal, Groom himself wrangles a handful of pairs of Vasque trail running shoes (justifying at least one with “that pair is old, but I wear them when I mow”), a couple pairs of Crocs (which he has to wear around the house, lest he break a toe, as is his wont), a few pairs of flip-flops, and maybe even something he could wear to a funeral or a job interview. Or to a job interview at a funeral home.

This shoe issue has been highlighted once again these last few months when we’ve dragged and toted around our heaps of crap during the remodel and floor refinishing. Twenty-seven trips later, and the shoes have been moved from the front coat closet out to the porch and then again from the back porch to the front porch and then upstairs and, on Sundays, into the basement.

Imagine, then, how giddy I was that last weekend’s garage sale would help reduce this problem. If we were shedding crap and more crap, a few shoes would have to scootch out of our lives, right?

Even better, to help organize the remaining household shoes, I had ordered a cabinet devoted to that one task. After the cabinet arrived on our porch with a thump the other day, Groom sighed a bit, crossed himself, and set to putting the thing together. I was upstairs admiring the way a pair of silver hoops jangled as I enunciated “Fish gotta swim, and birds gotta fly.”

He only grumbled “shita$$” once during the process.

But lookie! Lookie! We have a home for shoes! 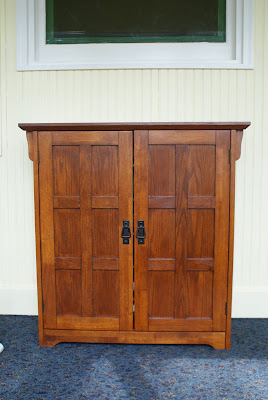 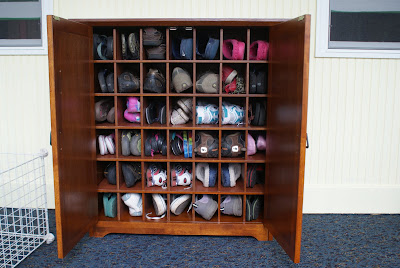 What’s more, if we ever get truly resolute and actually pare down our pairs, we can open our own post office and give everyone a mail slot! For now, though, we’re a family of four whose shoes are all nicely stored, which means that I must be a good person and maybe even grown up!

Sure, it’s true that not all the shoes fit in that one cabinet. We also have a little shoe annex in the coat closet. That’s still reasonable. 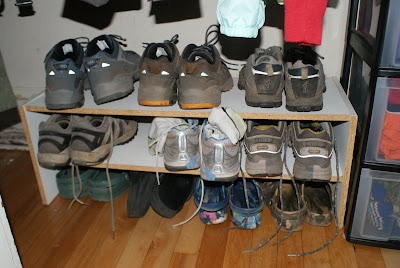 And, uh, naturally, because we live in a climate of four profound seasons, we also have snow and ski boots stored in the basement. 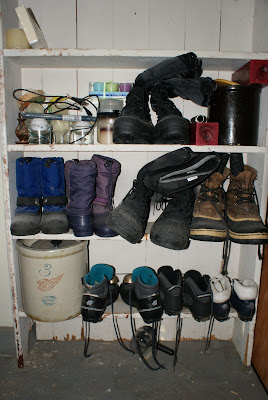 This is not a problem. It just means we’re warm and active, as all the most clever shoe owners are.

The other thing we are is environmentally conscious; when people give us hand-me-downs of things like soccer cleats and puddle boots, we’re much too deliberate about our footprint on this earth to say no. It’s all part of reducing and reusing, ja? 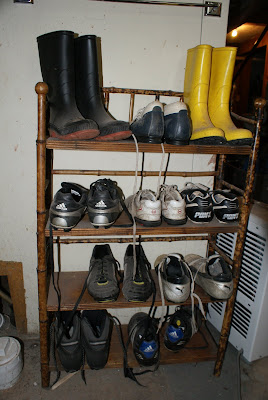 That’s why we also have this shelf next to the washing machine. I’m only wheezing neurotically the very smallest amount as I type this.

Strangely, the wheeze is intensifying as I recall–GACK–that we also have another bin of hand-me-down shoes in a basement closet, awaiting our kids’ future growth.

As the presence of enormous plastic bins always indicates, we engage in some serious tree huggery. 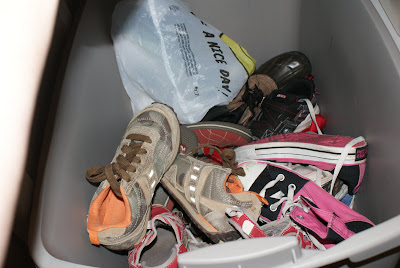 Since the air in the basement is so thick, I need to head up to the light, maybe to the haven of the bedroom…

…where, Sweet Snoopy On a Cracker, I’ve just remembered I have a closet full of very special shoes that make my feet feel like life is a party 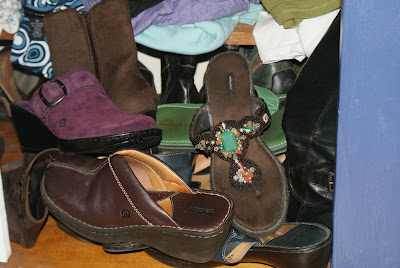 –even when my eyes are crying at the fact that my perspicacious Groom is right:

The way I feel right now, I can’t imagine what will ever relieve this doleful, sucking feeling.

But I’m guessing a new pair of Teva flip-flops could be balm to my sole.

shoes are the real evil; I embrace evil

21 responses to “I’m Kind of An Old Woman, and While I Don’t Live in a Shoe, I Believe I Could Cobble Together a Modest Colonial Out of Boots and Flip-Flops, Featuring a Sunroom Constructed of Cleats”