Hello, PetCo? I’d Like to Cancel My Line of Credit

When I met him, my husband was a naturalist.

Raise your hand if your first thought, after reading that sentence, went a little something like “Jocelyn’s husband was a nudist????”

Now put your hand down, Tinkerbell. You’re all alone in front of your computer, after all, which means it’s kind of queer to keep sitting there with your handing waving around, as though Mrs. Hwiggens will call on you eventually and let you shout out–wrongly–that “12 x 12 is 142!!!”

Indeed, put down your hand now. Straighten your shoulder pads, and wet down your forelock. Stop trying to learn your times tables (as if you can learn anything new at your age). Come back to the story.

When I met him, my husband was a naturalist. This meant he taught outdoorsy stuff at an environmental education center: white-tailed deer; beaver; water ecology; rock climbing; snowshoeing; the ropes course. Before working at the center an hour and a half north of Duluth, he had worked at a center in the Adirondacks in New York, at Florissant Fossil Beds and Mesa Verde in Colorado, and on a barrier island off of North Carolina. To this day, he has strong memories of each place, of communities of friends; of helping to slaughter a pig; of appearing in National Geographic in his full park ranger gear; of grits.

Interestingly, he is a naturalist who doesn’t care for animals (“I like the flora, not the fauna,” he explains). Most people greet that bit of information with a gasp, as though it signals a moral failing. In fact, we were at a dinner party some years back when it came out that two of the guests weren’t “animal people,” and the discussion that ensued over this was only resolved when one of them–the not-my-husband one of them–stated categorically, “It’s actually okay for me not to like animals. It’s within my rights not to want animals around me everyday. I’m still a good person.” She was so clear, so strident, so much the hostess of the party that the hubbub fell silent; thusly chastened, the animal lovers returned to cutting off large bites of their pork loin.

Because Groomeo doesn’t care particularly for animals, and because I have felt in the last decade that I already have enough small creatures, in the shape of Girl and Paco, to take care of, we haven’t had a pet.

Girl, who would be more aptly tagged “Groomie’s Girl,” is just like her father. Occasionally, she has made a limp gesture at pretending to want a dog, but mostly she’s too busy avoiding all animals in the vicinity to finish the thought. Paco has followed her lead, until recently, when he finally expressed a desire to get a pet. His only caveats are that he doesn’t want to touch it, clean up after it, or feed it. He would very much like to name it, though.

Paco has learned much at his mama’s knee.

At any rate, we tried to feed the boy’s need last winter, when we got him a beta fish. You know, Anikin. That fish, with only two balled-up fins and a baleful glare, actually managed to convey anger, misanthropy, and even a feeling of malevolence. I fully anticipated he would leap the tank one night and crawl down someone’s throat, just for the joy of choking off an air supply.

It wasn’t our saddest day when Anikin hated his way to the Grave That Flushes.

Then we had a quiet few months of relative ease, months when we merely struggled to care for our own curfuddled selves.

On Labor Day, however, we drove up the shore of Lake Superior and hung out with some friends for the afternoon at a place called Gooseberry Falls. There, Paco and a compatriot found some warm pools in the rocks, pools full of tadpoles. Desperately wanting one, but completely unwilling to touch anything slimy (he’s the anti-six-year-old boy, you see), Paco tried to cajole his parents into catching one. Better luck came when we gave him an empty tupperware for scooping; he managed to snare one and, in turn, pride himself on being a veritable lion tamer.

Get this: over the ensuing weeks, we didn’t kill the thing. I don’t know how it happened, but the tadpole didn’t die, and when it went through its evolution, we were fascinated. Before September, I thought I’d had a good sense of the whole “and then the little tadpole becomes a mighty frog” process, having seen it in the 1970’s in a filmstrip–but the truth is I had no idea. Watching the tadpole get legs and become more frogian everyday was riveting.

Suddenly, though, the transformation was complete. We had a frog, and not just any ordinary hopper but, rather, a tree frog, replete with them space-age type grippy sucker toes and a jet pack. Paco named him Grippo, and we were off, skipping down the path of pet ownership…

Fortunately, there were neighborhood experts mere yards away: the family with four boys. They gave us a lesson in catching crickets and loaned us a habitat, and we all settled in to the idea of watching our new pet climb every pencil we stuck into his tank. A tiny piece of me felt–no, not love–but contentment that my children might one day exhibit interest in going to a zoo. 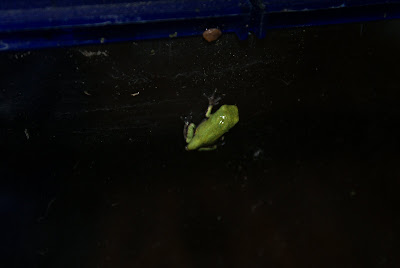 Grippo suckers up the side of his house 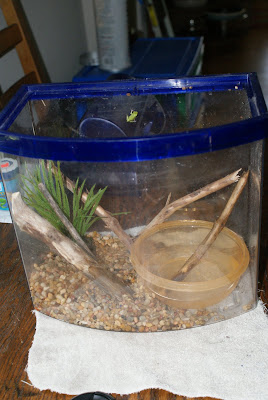 which all too quickly was returned to the neighbors when Grippo hopped off to the Great Froggy Mansion In the Sky after about three days.

Seems a piece of his tail never fell off when he left the tadpole stage. Takes about three days for remnant tail to mold and toxify its carrier. Takes about two seconds to flush a frog corpse.

Takes about two months for a six-year-old boy to find a replacement pet. Yup, this week Paco has hit upon a solution that satisfies the whole family, from his animal-averse father to his allergic-to-cats sister to his Pilates-loving mother: 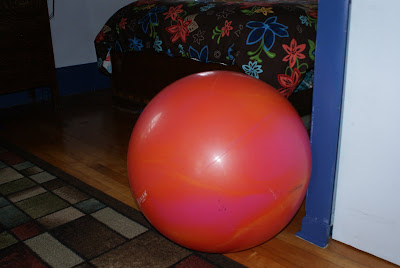 His name is Max. He doesn’t eat, so there’s no food to buy; he doesn’t poop, so there’s no cleaning up; he likes to play with kids, so we get to hear their giggles; he doesn’t bite, so we don’t need a muzzle; he doesn’t mold, so he won’t gradually become glassy-eyed and moss-covered; he is perfect.

Max sleeps at the foot of Paco’s bed each night, and every morning the lad rolls his pet into our bedroom. They romp together, and sometimes Paco holds Max on his lap while he eats dinner.

if he ever pops, Max is going to be a bugger to flush down the toilet.

plastic is the new pet, tree frogs come from THAT?

25 responses to “Hello, PetCo? I’d Like to Cancel My Line of Credit”