My dad was the person who taught me to be comfortable with silence. We could get in the car and drive for twenty minutes without a word being spoken. While his and my mother’s relationship ultimately cracked under the weight of that silence, for me, the daughter, his quiet felt benign, reassuring, a safe place to be.

Even more, when he did speak, his words carried weight. A handful of my favorite memories, in fact, center around moments when he engaged in verbal expression. One time, after I’d won a forensics tournament out of town, returning from the meet late at night, I left my trophy on the dining room table. By the time I woke up later that day, my dad had left me a note, telling me he was so proud, he was “busting his buttons.” Another time, after I’d behaved badly, he sat across from my hungover self and told me he was “deeply disappointed.” Many years later, during the night when a bat flew into my house, and I had a fairly apeshit “I’m all alone, and the bat is trying to kill me” meltdown for three hours in my bathroom, I managed to grab my phone (with the bat only gnawing off one of my fingers above the knuckle as I reached for the receiver) and call my parents, over a thousand miles away. When I sobbed and sobbed that a killer beast was out there, and all I had were tampons for friends and nail files for weapons, my dad, casting about, counseled, “What you need to do is try to reach way down inside yourself now and find something you don’t think you have. Dig deep, and you’ll find something you need.” He was right. We hung up, and I dug deep, finding inside myself the numbers 911, which I punched into the phone with great bravery.

Perhaps my fondest conversation with my dad occurred about a decade before his death. Chatting on the phone, we stumbled across the subject of my sister and me and our many differences. Trying to qualify the nature of the differences, my dad remarked that my sister took after his side of the family, where a certain dourness and pessimism sometimes manifested itself. “She reminds me of myself,” he noted, continuing, “and you don’t. You’re more, well, effervescent.”

There it was: one of those moments we hope for with our parents, those moments when they give us a word, an adjective, a feeling of being seen, and it signifies everything. It signifies that our parents see us as separate, as differentiated beings, that they have thought about us, that they have taken stock of us, that we are far enough away from them that the space has cleared everyone’s vision. Because such words, such adjectives, are born from the lifelong process of symbiosis to independence, they have power. Plus, anytime someone describes me to myself, I believe him.

It surprised me, then, to learn—-repeatedly–that a pipping personality didn’t reap greater rewards, in the larger scope of the world. Certainly, I didn’t expect to be voted into office on the Effervescence Platform, nor did I expect the medical field to approach me, asking me to donate to the Effervescence Transfusion Bank. But I did think being smiley and liking sunshine might have snagged me a boyfriend.

I did date a guy through my 20’s, and then I truly, madly, deeply dated another guy—-one who left my two liters of effervescence out on the counter with the cap off and made all the bubbles go flat. He de-carbonated me in a way that no one ever had before, not even the boys on the high school bus who moo-ed at my sister and me.

He made my sizzle fizzle.

And then my grandma died, and the doc found a lump in my breast.

Fortunately, I still had girlfriends who called, just when I was pacing the circle of my small kitchen for the 123rd time in an hour, gnawing on my cuticles, and they opened with, “Oh, honey. I just heard. Talk to me.” Even when I would have to set down the phone to grab another handful of Kleenex, they would stay on the line, shouting things like, “From the amount of snot you’re emitting, you do seem well-hydrated. And that’s something, right?” Also, I had family who knew how to circle ‘round gently and never look me straight in my teary eyes. Instead, they gave me food and invited me to participate in the yearly post-hunting butchering of the deer, and they talked at and around me.

Eventually, the molasses movement of seconds turned into minutes finally adding up into hours and days, and then months went by. My grandma was buried; the lump was benign; the former boyfriend had a new girl.

Just after the new year, one of my hunting cousins sent me an email, asking if I’d like to drive North to come visit them and, by the way, if I would be at all interested in letting him serve as my “agent in the field,” romantically.

Flattened, completely without zest or hope, my response was worthy of my father’s side of the family: “Go ahead, if you want to, but I won’t expect anything from it.”

Turns out my cousin already had someone in mind, a 28-year-old guy he worked with in a very small town of about 300. One day, sitting in the office, looking across at this 28-year-old, my cousin started musing, “How’s Guy ever going to find someone in this bohunk town?” A moment later, he thought back to Thanksgiving and the deer butchering and the conversations we’d had, which resulted in, “For that matter, how’s Jocelyn ever going to find someone in the bohunk town she’s living in?”

His head swiveled back and forth, and his thoughts rammed into each other. He approached Guy, who agreed, “Sure, you can be my agent in the field. But this cousin of yours, since she lives more than five hours away, she’d have to really knock my socks off for me to start seeing her.” Fair enough. Next, my cousin approached me.

It was agreed: I’d drive the five hours North and, while visiting my cousin’s family, meet Guy. In the past, imbued with effervescence, I’d greeted any opportunity to meet a potential partner with gusto and a knee-jerk, involuntary planning of our lives together. This time, I didn’t think much of the whole thing.

That February, over Presidents’ Day weekend, I visited. I got to hold my cousin’s baby a lot and watch his 4-year-old ice skate. One afternoon, we swung through the campus where Cousin worked. As we drove away, he said, casually, “Oh, that man back there who was leaning down, talking to people through their car window? The one in the red hat? That was Guy.” 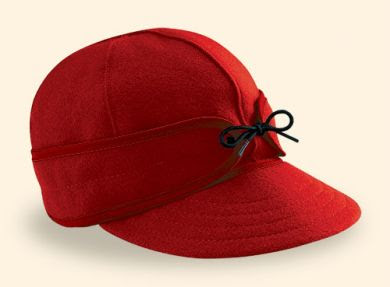 Cousin, perhaps, didn’t understand that such information would have been welcome, say, two minutes earlier. Cousin is a man.

That night, the guy in the red hat strolled into Cousin’s house, there for The Meeting, there for dinner. He carried a six-pack of homebrew.

I liked him already.

I learned that, while the idea of him hadn’t infused me with bubbles, the reality of him was creating a few tiny pops.

Dinner lasted five hours. As soon as he left, my previously-cool cousin and his wife, who had discreetly retired to the kitchen 8 feet away after dessert, were all nerves. They gave me all of thirty seconds after the door closed behind Guy before yelling, “SO? SO?????”

My response was positive, but guarded. He seemed nice. I would see more of him. If he wanted to.

But all the little broken pieces inside of me weren’t quite realigned yet. I wasn’t going to put myself forward this time. I couldn’t take another dashing.

Fortunately, a few days later, Guy asked my cousin for my email address. It had been mutual. Apparently, his strongest first impression of me was that I had a lot of hair. He thought he “could get lost in it.” 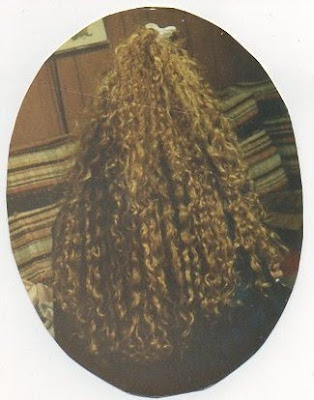 What ensued was a modern epistolary courtship. For three weeks, we sent messages back and forth, discovering that writing is an excellent way to get to know someone: the small talk is non-existent; the conversations get to meaty matters right away; there is no body language to read or misread, no annoying laugh to cringe from.

After three weeks, Guy announced he was ready to “jump off the comfortable dock” and into the potentially-frigid waters of face-to-face. Thus, during my Spring Break in March, I headed North again, for our first real date.

As we sat in a dingy bar, having burgers and beers, conversation flowed. Snow fell.

When it came time to take Guy to his house before driving back to my cousin’s place, my car got stuck. In the snow. At Guy’s house. He didn’t seem to mind. His roommates were friendly. I stayed over.

I had no choice.

What I learned in those days of my Spring Break was that Guy liked to listen to me read aloud–and if that’s not an activity of the infatuated, I don’t know what is. He also proved that he’s very good at necking.

And, about three days in, after he’d had a bath one night, Guy came back into his bedroom, where I lounged. “Brrrrrr,” he exclaimed. “My feet are cold!”

“Why are they so cold? You just got out of the bath tub,” I noted.

“They’re freezing because. you. knocked. my. socks. off” was the answer.

Suddenly, right then, right there: there it was. The effervescence was back, the flatness banished.

It was all going to be all right.

Not too long afterward, as I stared very hard at the ceiling, I admitted I had fallen in love. He had the right answer.

By the end of my Spring Break week, five days after our first date, we had talked about what kind of wedding we wanted.

Four months later, one July morning, as I slept on a futon on the floor, he crawled in with a plate of pancakes and a Betsy Bowen woodcut entitled “Fox on a Journey.”

And he asked me to marry him. 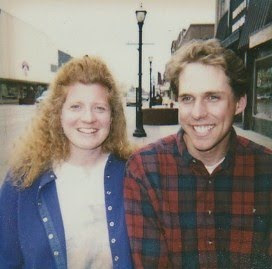 In quick order, we planned a wedding for the following May.

In even quicker order, like, the night we got engaged, I got pregnant. Three months after that, I had a miscarriage. Four days after that, we found out I’d been carrying twins, and one was still hanging on.

We moved the wedding to that November 13th, not nine months after we first played the Desert Island game over dinner. Guy became Groom right there at the environmental learning center where I’d first not-quite-spotted-him in his red hat. The bleeding from the miscarriage had stopped three days earlier. I sobbed through the vows.

All of that wonder unfolded in 1999. Not given to dreaming about the future before then, I have since been granted beauties I couldn’t possibly have imagined.

He likes to touch me. He likes me to touch him.
He cooks dinner every night.
He has been our stay-at-home parent since Girl was born.
At promptly 8:00 every night, he brings me a drink.
He is unfazed by my random bursts of tears.
He is whimsical. He is dry. He is perceptive.
He sees that my ability to talk to people is as valuable as his ability to do everything else.
He likes to play cribbage.
He knows how to give me directions that make sense, like “go straight until you see the big rock shaped like Richard Nixon’s head.”
He takes my ideas and makes them happen.
He just brewed a new batch of beer.

Like my father, he is given to quiet, most comfortable in stillness.

Thus, ten years in to the marriage, we often sit and watch the world flit by

anniversaries, dee snyder had nothing on me, first dates, kismet