And People Say Kids Don’t Pick Up After Themselves

With the friendliest of intentions, one of our neighbors handed us a stack of magazines the other week.

They were very good magazines, but the realities of life mean it would be three years before we would ever actually read them. Clearly, while some of them could be donated to the rack at the gym, many of them just needed to go to recycling.

As I made a stack of Get Rid of These Magazines, a curious little face popped up from under the counter. Holy hell, but that startled me! What was it? A monkey loose from the zoo? A Killer Bee? A Tse-Tse fly? An airborne blood pathogen? A magical sprite?

Yes, a sprite. Of sorts. Which I realized only after I took out my handy-dandy fly swatter/monkey catcher kit and starting whacking wildly at the curious face.

When had monkeys learned to holler? Evolution is so cool.

It was Paco. Sensing an opportunity, he had crawled into the room and been watching me mutter and stack and start heaving magazines into the recycling bin.

“Could I have a couple of those?” he asked.

“Do you have matches?” I countered.

An innocent “no” came my way.

No dummy, I then asked, “Do you have a Bic lighter?”

“You mean one of those clicky things that makes a flame?” the innocent voice queried. “No, I don’t have one of those.”

“Do you have gasoline or a scythe or low-level explosives?” I needed to confirm.

“Not right now,” he conceded. “But I do have scissors. Can I use scissors?”

Yes. Scissors fall under The Parental Umbrella of Approved Tools to Use In Conjunction with Newsprint, Recipe Cards, and Magazines.

Quickly, however, the boy realized that, compared to the claws that grow naturally on the ends of his fingers, scissors are clunky and ineffective. 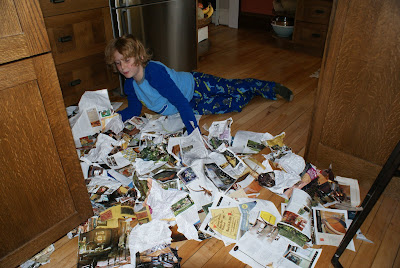 Bare-handed, he tore the stuff apart. 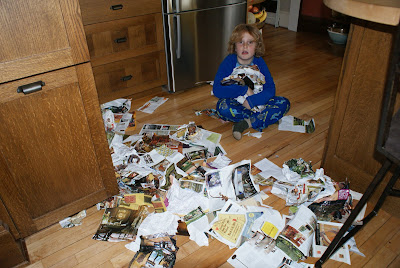 Then, after he shredded it beyond repair (as a boyfriend once did to my heart), the boy–curiously–felt the need to cradle the remnants for a brief period. 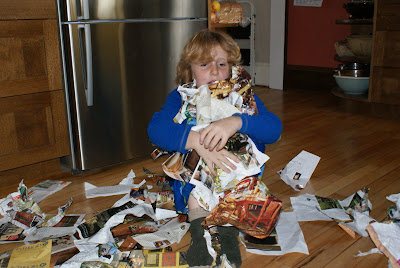 A quiet moment to consider the damage… 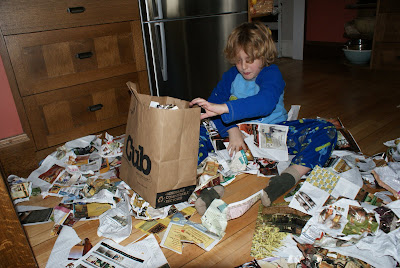 …and then–Hand to Heaven and Martha Stewart!–an unaccountable need to clean up struck. 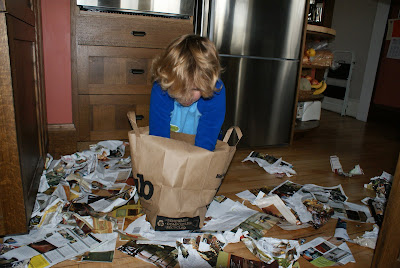 Seriously. What 6-year-old boy wants to tidy up? (not coincidentally, did you happen to read a previous post about this kid called “My Fine, Gay Son”?) 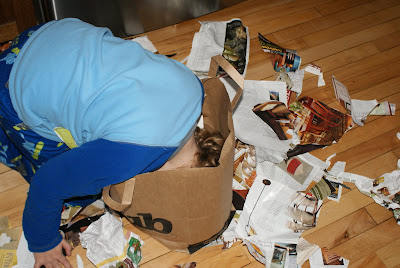 Reassuringly, midway through the clean-up, Paco realized he was actually a trash compactor, one that used its head. 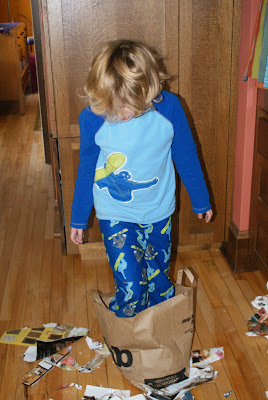 …and its feet. High-end trash compactors have feet these days, you see. 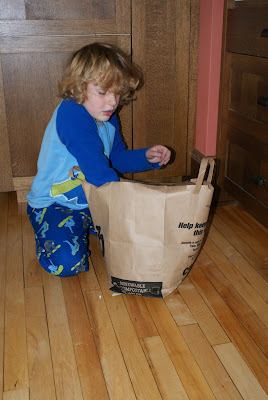 Spic and span. Tidy and tight.

But what to do with the bag of scraps?

Sighing in defeat, I handed over the Bic lighter.