A Little Song, a Little Dance, a Little Seltzer in Your Pants

“I’m coming to give you your cuddles, Mama!”

Usually, Paco’s Hug My Mama time lasts for about ten minutes, until I rouse him towards the bathroom to get ready for school–and by “rouse him,” I mean zzzzzzzllllllbbbrrrrrr his tummy, talk to him about ninja strategies, contemplate what Fire Type Pokemon he might be, and then pretend to be a locomotive called The Baby Express. Once he’s ready to board The Baby Express, I am required to chug to the bathroom, Paco clinging to my torso, as I chant, “Honk honk, choo choo, the Baby Express is comin’ throooooouuuuuuuughhh.” Moments later, he sits on the toilet while I “do his hair.”

The other morning marked a departure from that ritual. Certainly, there was the skitter. But when his soft warmness hit the bed, Paco announced, “I woke up early today, so I read in bed. Boy, did I read some good stuff. I brought one to read to you. It’s called Monster Money.”

In the ensuing three minutes, I was not only assured that monsters are “even funnier than aliens,” but I also learned the various ways that I, were I a monster, could come up with a dime so that I’d have enough money to buy a pet from a store that–Praise the Sleestack–only charges ten cents per animal. Turns out, I might just have a dime. But I also could put together two nickels. Potentially–and get this: I could also add together a nickel and five pennies. Alternately, if I’d really scraped under the couch cushions and taken all the random lint trap change off the top of the dryer in the basement, I might have the luck to come up with ten individual pennies. No matter what, my dedication to dime finding would result in a bat, a rat, or a beetle coming home with me to the swamp.

Having wrung every possible dime configuration out of Monster Money, Paco sat silent for a moment before announcing, “Now I’ll hug you for awhile…hey, NO, wait:  I read an even better book this morning.  It’s so funny, Mom.  You gotta hear it.”  With that, he launched himself back to his Kid Cave, grabbed the book, and hustled back under the duvet with a “You’re gonna laugh A LOT at this one, so maybe you should run to the bathroom before I start.”

Seeing that he held Froggy Plays in the Band, 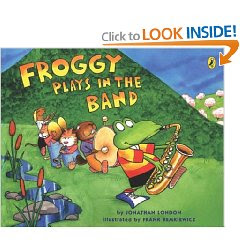 I trusted his wisdom and busted out for a potty break.  Upon my return, I had to caution the lad, “You only have about two minutes until we need to get moving, or you’re going to miss your bus.”  Reassuringly, Paco patted my hand and assured me, “Even with pressure, I can read very fast.”

About three pages in, I realized that the book would take more than two minutes and that I am totally the mother who will drive her kid to school, if it means he gets to finish a book he’s excited about. Plus, it’s impossible to shut down Paco’s vigorous oral interpretation (his first grade teacher commented during our parent/teacher conference, “When he reads out loud, he’s like a storyteller,” at which point I hugged on her and, shortly thereafter, asked if she could Baby Express me to the bathroom).

So he read.  He gestured.  He stopped periodically to make sure I wasn’t missing anything, especially the part where Froggy jokes, “I’m on the phone–the SAXaphone!”  Towards the end, we had to take a 30 second chuckle break on the page where Froggy gets hit in the head with a baton.

The book done, we raced through Paco’s morning ablutions, and he still had time to choke down a chocolate chip pancake and some dill pickles before dashing out to the bus.

With the little nutter off to school, I went back to bed, musing that I couldn’t have anything but a shiny, happy day when it had started so auspiciously.  As ever, the kid set me up to smile.

He’s done that for seven years now.  Close readers of this blog might be thinking, “But, Jocelyn, your first grader is six. I hate it when parents are so out of touch with their children that they don’t even know how old they are.  This example of Negligent, Distracted Mother Jocelyn is exactly why our jails are so full.”  News for all of y’all huffy close readers:  Paco is having a birthday this weekend.  He’s turning seven.

And since he is the source of at least 55% of the smiles in this household, we’re all finding it easy to surf the wave of excitement about this milestone.  You see, he owns us.

From the way he reads to me in bed…to the way he makes up “shoot-the-cannon” games with his beloved older sister “De-De”…to the way he sighs ominously towards Byron and announces, “I think we’re going to need to make a project today, Dad.  Do we have wire and some foamy stuff?”…the lad is our bestest buddy.

What I’m looking forward to in the next few years of elementary school is further blossoming as he develops greater depths of confidence and coping skills, as he makes friendships that reflect back to him a new perspective of himself, as he fine tunes his schtick for more varied audiences.  He’ll begin the process of separating from us, his greatest fan club, and that’s just as it should be.  I’ll be able to see him better once he’s a couple steps away.

Already, he has found an activity that is his and his alone–something that no one in the family has done before him.  With every other lesson or sport or activity, someone can say to him, “I used to love swimming lessons when I was a kid” or “When De-De started soccer, she never touched the ball either,” but with martial arts, it’s his alone. 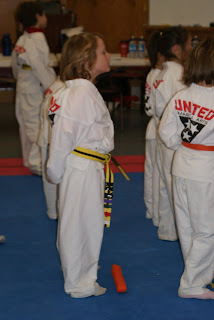 So is the orange belt he recently earned.

In the next years, he’ll continue to earn and learn and carve and shape his own world. He’ll become his own self and not just a kid who often wants to crawl back inside me.

No matter how he changes, though, I feel certain he’ll always be a serious goof-ass, ready to tussle in the snow: 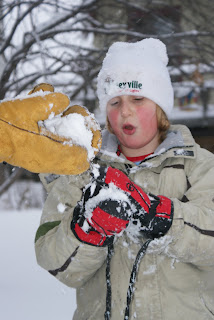 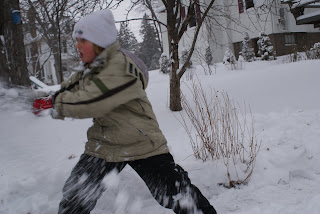 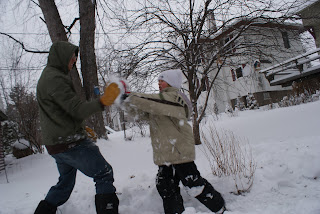 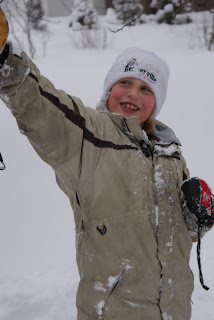 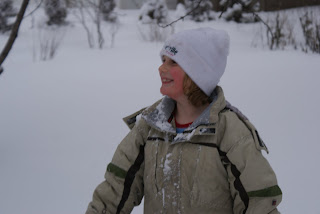 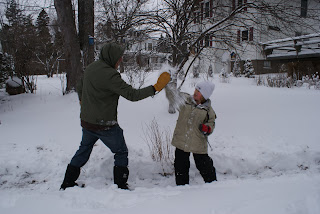 I predict, too, that when the tussling’s done, he’ll still have the impulse to drop for a refreshing amuse bouche 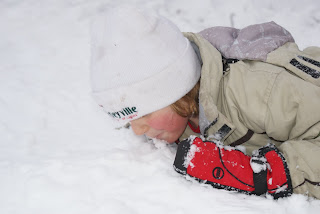 …to spit onto his dad’s leg. 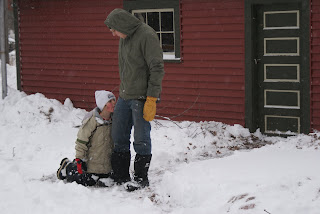 And when the tussling and amusing and spitting are done at the end of his every future day–wherever he is, whomever he’s become–I hope he’ll always be buoyed by a feeling that he’s not alone. 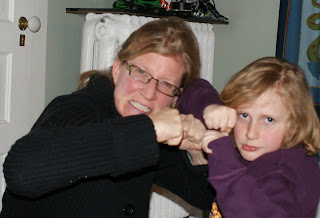 For always and ever, we’re in his corner 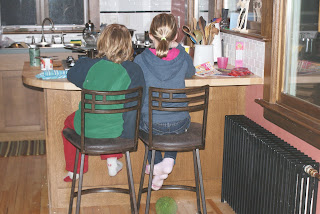 and he’s in ours– 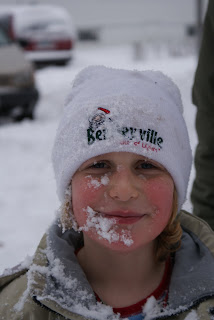 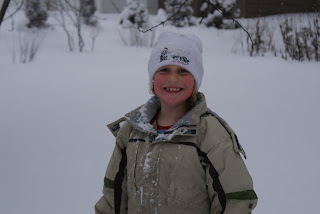 20 responses to “A Little Song, a Little Dance, a Little Seltzer in Your Pants”