Each Day So Long It Feels Like a Month

“Is the phrase ‘Slough of Despond’ from Harry Potter or what?” I holler to my husband, who is folding laundry four feet away.
We both half-wonder why I’m hollering, what with him standing right there and all.  But, then again, it’s been that kind of day.
A hollaback-at-your-knickers-folding-husband kind of day.
In that moment, I was, actually, as much moaning as hollering.  I was mollering–making wounded noises like a beaver with its foot caught in a trap, considering gnawing off the source of its angst and lurching towards three-legged freedom within the dark cave of a dam.
“I don’t even know what you mean when you say these words ‘Slough of Despond‘,” my avowed responded, balling up a pair of socks.  “What are you talking about?”
“There’s this phrase ‘Slough of Despond’ that’s running through my head, and I was sure you’d know where it’s from.  However, I guess we’re lucky you have a handsome mug…because your brain certainly isn’t paying the rent.  So ‘Slough of Despond’ isn’t a Harry Potter reference? Like you’d know, pretty boy.  Well, hell.  Who coined it, then, if not La Rowling?” I yodeled over mountain-spring-scented heaps of clothing.
“Why do you even ever act like I’d know what you’re talking about? You’re hardly the most sensical redhead on the block,” the delight of my life tossed back.
“Okay, so it would seem I’m making shit up again.  I’ve got to hit the Google and input ‘Slough of Despond.’  Hand to heaven, I wouldn’t know a single thing without the Google these days.  Today alone, I’ve turned to it to find out how many seasons of Project Runway there have been, how many flavors of lip smackers there are in existence, what the name of that ski-jumping Swiss guy is, what alternative therapies to chemo are, what contingencies my car insurance covers, and which Scandanavian town my family members are named after.”  With that, I trotted to the keyboard and input “Slough of Despond.”
Turns out neither the eponymous Harry Potter nor his namesaked Swiss ski jumper had anything to do with it–but, rather, it’s a turn of phrase from John Bunyan’s Pilgrim’s Progress, a tale that moralizes the weight of sins and guilt.
Frick.
As usual, Google has spat out head-turning information, but ultimately my cast has gone awry.  You see, when, over a mound of clean underpants, I badgered my husband, I was searching for a phrase that could express how boggy I’ve felt this past week.  Here I thought I’d been mired down in the Slough of Despond.
However, my issues have little to do with guilt or sin.  My issues are more of a seasonal, desolate, Februarian nature.  They’re more about feeling trapped and choking in a brume of quiet despair.
With the Slough paved over, I have to try elsewhere to find an idea that captures feelings of being backed into a tight corner and ready to start clawing.
Scritch.  Scritch.  Scratch.
Perhaps the sensation is more resonant with Victorian women and hysteria.  That must be why I’ve been repeatedly recalling, this past week, my first reading of Charlotte Perkins Gilman’s “The Yellow Wallpaper” back in high school, an experience that took place on the second floor of Billings West High School, a moment when I sat up straighter and thought, “My bangs may not be as pouffy as I’d like today, and the strap of my overalls keeps falling down in only a limp approximation of Come On Eileen, but that’s somehow irrelevant in the face of this poor Victorian woman’s powerlessness and culturally-induced insanity.  What the hell, poor locked-up protagonist lady:  let me stretch out a quivering fingertip alongside you and trace the winding pattern of the lines in silent communion.”
Indeed, something about this late winter month–coupled with the kids having a week off from school, topped by Paco having had a fever (two weeks ago), a double ear infection (last week), and then waking up with another fever yesterday (on his tenth day of a ten-day course of antibiotics)–creates in me a soul-sucking feeling of desperation.  Doldrums, if you will.
Queerly, essential to this cloying sensation of “I beseech thee for just one small sanity-saving grace, my monarch Victoria” is an overlay of “but, truly, even as I struggle to catch a full breath, aren’t I lucky?– for at least I have a corset and some of that new-fangled indoor plumbing”; that is to say, without certainty that my life is somehow profoundly fortunate, I wouldn’t have the leisure to wail about every pip of internal strife.
These last few days, laced too tightly, I am gasping for air.  Nothing is wrong, per se, but every hour feels like three.  I’m tired of all of us being in the house all the time, trying to figure out what to have for the next meal, folding yet another damn load of laundry, filling and emptying the dishwasher.  Certainly, I’ve tried to mix it up.  I’ve taught Girl to play Mastermind and Chinese Checkers.  We’ve had friends sleep over.  We’ve watched Olympics.  Groom has framed some pictures.  I went to Pilates and yoga and then I swam and ran and skiied.  I’ve played four simultaneous Scrabble games on Facebook (most noteworthy play of the week took place in a three-way game:  I had just the right letters for “menage,” and that’s just good old-fashioned Midwestern Protestant irony).  I’ve read 420 messages in online classes, graded 75 activities, and told students how sorry I am that their a) mothers died; b) computers died; c) cars died; d) enthusiasm for the class died.
Nevertheless.
I feel like I’m swimming through grey fog, staring at my family and thinking, “It’s 1 p.m.  Whatever can we do to get to 5 p.m.?”
Yesterday, we enjoyed brief respite from the fog when we dragged the kids to a neighborhood park.  At first, the kids had to sit and stare sullenly into space.  That’s why we have kids, right?  So they can give us reflections of ourselves? 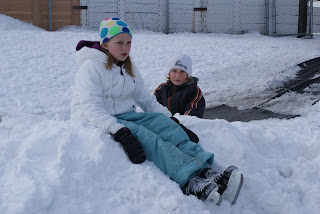 Because Girl is a champ, she got out on the ice (first time in two years!) and took some turns.  She only complained every seventeen seconds about her ankles hurting.  But then she’d get back up and go around again. 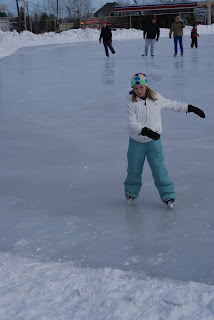 After shadowing her for about five minutes, I looked up.  Nice clouds. 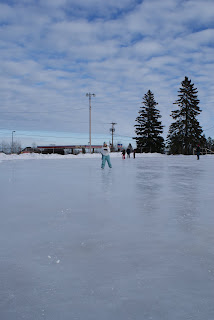 Then I looked at Paco, who’d gotten over his Crabbies long enough to start mining for ice crystals and burying the plastic bowling pins we’d brought along (even in a funk, I know how to pack for my kid).  Hey, nice clouds above him, too. 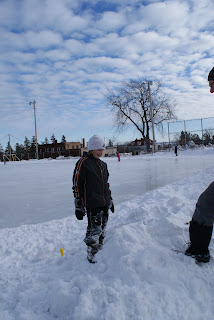 Paco excavated a fossil from a previous ice age. 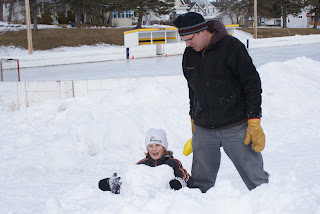 After excavating, every good archaeologist needs to take a moment to peer into The Pin. 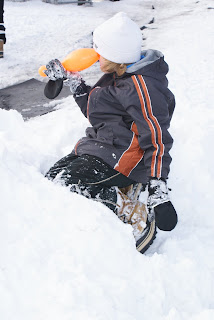 He saw deep into the past, far into the future, and his vision told him… 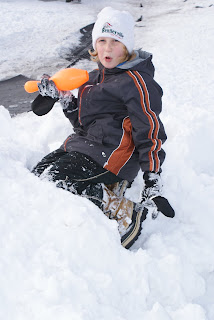 …that it had been February for some time, and it would be February for quite some time yet, and the hours would continue to tick slowly by,

except for this one, which, thanks to skates and clouds and bowling pins,

actually did feel like only one instead of three.