Seven Miles and a Side of Ketchup

The beauty of my husband is that, in addition to accepting my quirks, he comes up with ideas as to how I can bump them to the next level.

A couple of months ago, for instance, I was thumping around the house one afternoon, kvetching about how Jocelyn’s Perfect Storm coalesces when free time for exercise is countered by a deep peckishness. The winds began to swirl as I headed for my running clothes while thinking about biscotti; darkness set in as I began layering on pairs of socks while considering the richness of a breakfast burrito; sleet began to spit from the sky as I snapped on my Ipod while picturing a pasta bowl teeming with carbonara; 50-foot waves began kicking up as I reset my running watch while mentally buttering a huge hunk of challah.

Standing up to zip my windproof shell, I bellowed in frustration, “This is the only time today I have when I can go for a run, but mostly I just want to tip a cow and gnaw on its leg.”

While I often do my bellowing in solitude, on this particular day, Byron was there.

I continued, “And so here I am, quite virtuous despite the growling in my belly, ready to go for a run now.”

“Except running is kind of hard to think about doing seeing as I’m ravenous, in a profound way that no quick banana could remedy.”

“Because what I’m trying to say is that I’m hungry in a ‘just set the entire pot roast on my chest, please’ way.”

With that, I started stomping towards the door, only to be interrupted by Byron’s voice, suggesting:

“Why not go get a hamburger as part of your exercise?”

I understood his words. He had said “hamburger,” after all. He was speaking my language.

But what? Get. Hamburger. As. Part. Of. Exercise?

As the halves of my brain shifted and then realigned, as the universe tilted three degrees on its axis [which is super weird–the universe on an axis! I am so totally an English major and leave that quantum junk to the, uh, geologists], as everything I knew, as everything I had ever known rushed towards me and receded again, I was left enthralled by his suggestion’s brilliance.

“So, you’re saying eating a hamburger and going for a run can co-exist?”

Supportively, Byron pointed out, “Well, not for just anyone. Most runners can’t stop for a burger mid-run. But you have a well-documented ability to eat heaps and still be hungry, remember? And you’re the one who can slam a 20 ounce latte and then head into yoga class and hold a downward dog for ten breaths. Not once, not once, have you ever urped, either. I think you can do this.”

As he spoke, his voice was unusually mellifluous. I fell under the spell of his dulcet tones.

“So here’s what I’m suggesting, Joce. You run from here, down the Lakewalk, then cross over the foot bridge and come up on London Road near all the fast food places. You know how you love a Wendy’s burger? Today’s your day, girl. The mid-point of your run will be Wendy’s. You head in there, have a burger–make it a double–and then you run home. When you get back, your every need will have been satisfied. How’s that for Living Your Best Life?”

Swooning, I responded with a, “So wait a minute. Not only are you motivating me to run, you’re also throwing in the promise of beef and topping it all off with an Oprah catchphrase? Honey. Oh, honey. You’re speaking love to me right now. The Romantics had nothing on you and your ‘Ode to Enabling Jocelyn’s Every Random Desire.’ I’m warning you right now that when I get home, I’m going to be pumped and fueled, so protect yourself. My huggin’ arms will be out and looking for squeezies.”

With that, I tucked my debit card in my sports bra and galumphed out the back door.

A delightful destination in mind, I ran with vigor, hardly noticing that it was the coldest day of the year, with windchills in the double negatives.

Ten minutes in, though, even dreams of hamburgers couldn’t distract me from encroaching frostbite. I felt myself in a conundrum: must get to burger, but must keep skin alive. How to do both?

A-ha! Giving the debit card–and, okay, my left breast–a quick rub, I remembered that I had options.

Not too far past the Wendy’s was a running store. Thus, my first stop was there, for a few more layers (how negligent of Byron to forget to factor a shopping spree into Jocelyn’s Best Run Ever!). Minutes later, wearing yet another pair of wool running socks and a new Smartwool balaclava, I bounced out of the Duluth Running Company and turned my compass towards a double, no pickles, no tomatoes.

An hour and a half after leaving the house, I returned from my run, debit card still warm on my chest, new balaclava covering the ketchup stains on my face: 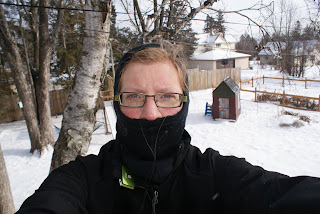 Byron peeled down the faceguard, took one look at my grinning mug,

sniffed my breath for telltale signs of recent carnivorous inhalations,

“I was thinking: you know how you want to swim laps more often? What if we put English muffins by the diving board?”

not being perfect as the basis for true love, running for a double

22 responses to “Seven Miles and a Side of Ketchup”