Don’t Even Bother with a Tickle-Me-Elmo

You better believe we can drive to Target blindfolded. What’s more, we’re members of The Birthday Club at the independent toy store. We’ve rocked Goodwill. We know how to hit the “pre-sale” at local garage sales.

In short, we know where to find Playmobil sphinxes; robots with remote controls; board games for learning geography; scooters for knee skinning; and baby dolls to dangle upside down by one foot, negligently, “like Mama did to me when I was little.”

Oh, yes. I am a toy aficionado. The officers can check my credentials at any border crossing, and I’ll be waved through in record time with a peppy “May you find a deeply-discounted Melissa and Doug wooden pizza set at the TJ MAXX, intrepid traveler!”

Born from a decade-long honing of expertise is this insider tip: if you only were to buy one toy, one pastime, one piece of attention-occupying junk to have in a house containing kids,

go for an easel…particularly one that has an erasable whiteboard.

When our Girl was two or three, her grandparents gifted her with just such a thing. I plan to have those grandparents cast in bronze. They are keepers and would look great on the mantle.

Over the last eight years, as other toys have come and gone and fallen down the toilet, the easel has been a steady presence: backdrop to fingerpainting, sponge painting, leaf painting, and some dabbling in oils. Its chalkboard has been the basis of many an imagined classroom. And the whiteboard half of it?

Well, you know. There’s been Pyramid Man, for one.

In addition, there’ve been about forty-ninety-eleven other scenarios drawn upon it, including aliens attacking the Midwest (what were you doing that day?) and maps of Middle Earth.

Of late, the whiteboard has been home to Girl’s “Daily Question.” See, Girl has a penchant for collecting information about people. In the last few years, she’s gone so far as to type up surveys, have us make copies, and then distribute them to everyone we know; the results are then alphabetized and collated into three-ring binders.

Clearly, I am delighted at the thought that she will one day be handling our estate.

In the last few weeks, her penchant has found roost on the whiteboard, where she poses a question of the day, and then all comers (namely me, Paco, and Groom…unless a random runner stops by, needing to empty his bladder) are to answer it, signing their responses with a representative symbol. For awhile, I made up all sorts of crazy symbols, but in recent days, I’ve lapsed into a no-thought sunshine (a symbol of something I hope one day to see). Paco can be counted on to create a symbol with three heads, something emanating radioactivity and malice; alternately, if he’s tired, he just scratches out a claw. Groom’s symbol has morphed, like mine did; these days, he uses a little version of his own face, which poses a bit of a problem because then I have to kiss the whiteboard a lot and, tactiley, that’s a pretty strong turnoff. Suffice it to say, Groom’s whiteboard alter ego is getting less and less action as the weeks tick by.

One of the educational upsides to The Daily Question is that Girl is learning to construct her questions better. While it is a hardship to her that she has smartass parents, we like to think we’re preparing her for the idiocy of the real world.

As a case in point, she put forth this past week the question of “What are your three favorite flavors?”

To tell you true, we knew exactly what she meant, as she’s in the throes of planning a Lip Smacker birthday party. We knew she meant “What three lip smacker flavors are your favorites?” but since she didn’t specify anything lippish or smackerish in her question, we simply listed favorite flavors.

Compounding the arse-pains was the fact that Paco only listed one response, not three, and Groom and I listed more than three.

Listen, the girl wants to be a teacher when she grows up. This is all good training.

After some complaining and give-and-take and a visit with her union grievance representative, she revised her question, making it more specific while also allowing for longer lists: 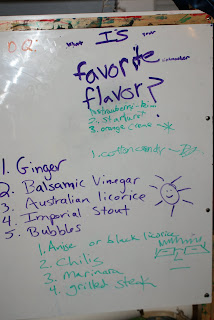 In its revised version, the question reads:  “What is your favorite lip smacker flavor?”

Paco gets to the point with:

Paco is a big liar, as he also loves it when his lips are glossed over with Rootbeer Float or Skittles Berry Punch.  However, we consider lying training to be essential for a successful future–just like confounding the instructions of a future teacher is–and, therefore, he suffers no consequences for the omissions.

Refusing to put forth the effort to change our answers even after Girl revised her question, Groom and I held firm with general “favorite flavor” lists.  Consequently, my favorite lip smacker flavors are:

And Groom admitted he likes to coat his lips with:

A few days later, ready for another question, I took the initiative and asked: 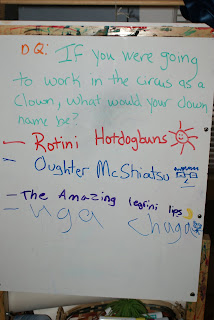 If you were going to work in the circus as a clown, what would your clown name be?

Clearly, the family with a whiteboard is the family that can run away and join the circus together.  I do, indeed, strongly recommend bringing one into your lives–better yet, your bathrooms–if you are currently whiteboard free.

In fact, I’m so enamored with whiteboard-based communication and conversation that it’s my intention to request one for my tombstone.  Who needs boring old static words (“She annoyed many/But loved few”) when I could host The Daily Question into eternity?
————————————

So give, dear readers:

What are your top three favorite lip smackers flavors?

And if you were a clown, what would your clown name be?