We’ve been busy at the bathroom whiteboard again.

The other week, I posed the question, “If you could attach a new body part onto yourself, what would it be?”

Before answering, I did consider a hand with a goblet growing out of it.  I also saw sense in attaching an arm that extends into a cake server.

However, because simply answering this simple question made me thunk at my forehead for a bit, I ultimately had to draw myself with a second brain–a new model, you see, to compensate for the existing one that’s riddled with Swiss cheese holes.  With a new brain, I might sometimes be able to find the clogs I like to wear around the house…

instead of constantly wandering around the kitchen, forlornly whining, “I can’t find my clogs.  Where are my clogs?  Has anyone see my clogs?”  When I’m done doing that in the kitchen, I head into the living room for a repeat performance.

———-
Paco read the question and immediately came panting up to my side, gasping, “Does it only have to be one body part?  Or can I add all the things I want?”

Assuring him we have The Whiteboard of Dreams, I gave him license to consider all options.

At which point he drew himself with scales, a spiky tail, multiple eyes and arms, and wings.  Just in case he ever encounters General Grievous in a dark alleyway.

————
Girl delighted me by inventing a new part, something called a “furkla,” which is essentially a long jump rope that attaches to the body in six places (shoulders, hips, knees).  “Hosannah to Rocky!” I cried, “You’d be like a flying squirrel, in a way.  You could climb a tree, jump from it, and then hope your ropes snag on enough branches to break your fall. It’s kind of like base jumping with a rope.  Also, you can strangle evil villains, and if you’ve ever just stuffed a turkey and have no string to tie the legs shut, you could use your own furkla; sure, you’d then have to stand next to the oven for all the hours while the bird bakes, but once it came out, you could unwind your furkla and feel proud of helping to provide a meal for 15 people you don’t actually particularly enjoy being around!  Plus, even better, you could use your furkla like bungee cords, so if you needed to put a bike on a bike rack and secure it there, all you’d need to do is lean out the back window and wrap your furkla around the bike, hollering ‘Hit it!’ to the driver, and the job would be done.  You also could…”

“Mom?  MOM,” Girl interjected.  “I just think it looks cool.  That’s all.”
—————————
Best of all are Groom’s attachments.  First, he’d attach a flaming tail.  He is, after all, Paco’s father.  Of course, rather than hoping to take on legendary villains in dark alleys, his rationale was, “If I’m making a creme brulee, I can brown the top using my tail, which is a whole new kind of efficiency.”

Groom also, much to his son’s delight, added a mohawk.  ‘Cause who wouldn’t want one?  Duh.

And then he’d add a beard–a far-fetched body part, indeed, for a man whose face looks like it’s been rubbed in coffee grounds, even two weeks into trying to grow a real one.  Live the dream, Grizzly Adams.  Live the dream. 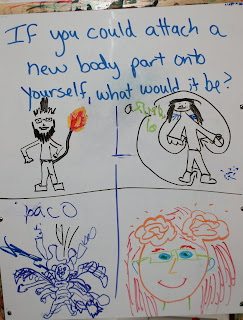 How about you, Monkeys? If you had the chance, what body part would you attach to yourself–and why?

I know what body part you’d add you preevert, question of the day

19 responses to “Call Me Scarecrow”