The Kids Are on Spring Break This Week, Which Means I’ve Been Playing with Clay and Moon Sand and Building Towers out of Blocks and All Sorts of Other Things That Aren’t Blogging–Which Pretty Much Explains Why This Post Is Heavy on Pictures 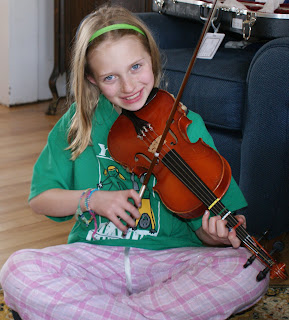 This punkin’ right here had a sleepover birthday party last Friday night. As of this writing (the Thursday following the party), I’ve almost recovered.  I’ll also attribute my slow recovery to the fact that Groom was out of town for a couple of days after the party, and during his absence I took the kids to see Diary of a Wimpy Kid, and, well, Paco processes stimuli pretty deeply, so he was up four times that night “because I just keep seeing bad pictures in my head.”  I was seriously sympathetic, as nothing plants bad pictures in one’s head as effectively as a film about the horrors of middle school.  By 2 a.m., the night of the movie, Paco and I were laying in bed, clutching each other, whimpering sleepily to the universe, “No more mean kids.  Stop teasing us.  I’m sorry my bike is dumb, and my clothes aren’t cool.  I won’t ever try to sit by you at lunch again.  Why can’t we all be friends?”

At any rate, after a couple nights of getting four hours of sleep, and since I’m no Margaret Thatcher or Octomom (both avowed “just give me a couple hours of nod, and I’m ready to rule the kingdom” types), my All Kinds of Everything were a bit out of whack.

However, Punkin’ Girl’s sleepover party was worth the resultant foggy head.  Not only was it terrific fun for her and her friends, but the occasion of the party helped me put more time into a burgeoning friendship myself.

And honestly, once the School Years are over, doesn’t it become increasingly hard to make deep, lasting, meaningful friendships?  Sure, there’s the bar.  You know, where you meet people whose charms become translucent in the daylight when all beer has evaporated from the skull.  And I guess it’s possible to make friends at work, but, frankly, I recoil from that idea–simply because we share an employer doesn’t mean I don’t want to slap you for asserting that homeless people are on the streets by conscious choice, O Righteous Colleague.  Oh, and there is always the possiblity of befriending a neighbor, as has happened in my adult life, but the honest truth is that a conversation with the neighbor often starts with Her Nice Self admitting, “I’m pretty obsessive about doing laundry” to which my only rejoinder is, “Uh, I’m pretty obsessive about Philip Roth and the heroic work of genius that is Fun Home by Alison Bechdel.”  After that, we lapse into confused silence, her craving her fabric softener, me craving my bookies.

Thus, when a new, adult girlfriendship comes galloping out of the mist, it’s a rare treat.  Over the last few months, this has been happening for me.  Her name is Kirsten, and she’s married to my Great Life Pal Virginia.  You can probably see already how much we have in common:  we both love lesbians.  Kirsten is one, and I am an admirer of many–and not only for their cleverness in finding a life that gives them double the wardrobe for half the cost.  I also admire that they have found a life that assures them of a tampon in every cupboard.

Anyhoodle, Virginia is 73, and Kirsten is 37, and their May/December relationship is beautiful.  I’ve known for 14 years that Virginia is one of my bosom besties, but it’s only recently that I’m getting to spend enough time with Kirsten to love her, too.  Girl’s sleepover party cemented it.

…because, a few months ago, when Girl was first begging to have seven of her closest friends sleep over for her birthday, I had to cover my eyes with cucumber slices and say, “If I can’t see you, I can’t hear you!”  Internally, I knew I could probably go up to four girls without losing sanity.  But seven?

However, Kirsten overheard this conversation and commented, “A bunch of ten-year-old girls?  Sleeping over?  That is SOOOO up my alley.”

Kirsten works in a high school for a program that aims to keep teens off drugs and booze.  For her, a sleepover with a passle of ‘tweens is like putting training wheels back on the bike.

Hearing Kirsten’s comment, I turned to her and said, “If you come do the party, then, it’s a go.”

In a good way.

Kirsten, em, has lots of ideas…like how it should be a lip smackers (think kid lip gloss) themed party, and how she’d make a pinata that looked like a tube of smackers, and how she could set up her Wii with a projector, and how fun it would be to make and laminate a stack of lip smacker-Bingo cards, and how, once Girl said she wanted to host her party at The Lip Smackers Hotel, Kirsten would put together complimentary shampoos and conditioners and facial soaps for each girl’s gift bag…

Kirsten doesn’t live in our fair burg, so she drove to Duluth a few days before the party, which was good, because it gave her time to learn how to use fondant when icing cakes that are designed to look like round lip smacker tins (in various flavors!).  It also gave us time to eat out, go for walks, buy shoes, and share stories of life traumas.

Because Girl wanted to celebrate with her friends, I got to make a new one.

So here are a few shots of the party: 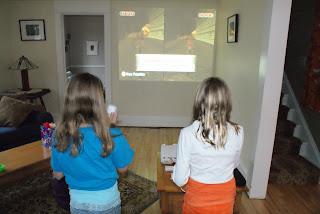 The event began with guests being asked to check in and sign the registry at the Lip Smackers Hotel.  Once each guest had been issued her room key (which Girl made weeks beforehand), she was invited to partake in some resort games in the lobby. 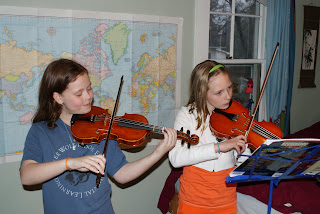 The girls, when they’ve come over in smaller packs at other times, have often brought their instruments.  To them, playing together is the height of fun.  It is at this juncture that I’d like to shake my fist at the sky and curse the Duluth School District, an entity which recently announced that it is cutting all “magnet” programs in the public schools, such as the music enrichment program at my kids’ school.  We got Girl on a waiting list for this school when she was 18 months old.  The fact that most of the music will be cut starting next year makes me triply glad we’re pulling our kids from the district and booking out of here for a year.  I’m not ready to think about what we’ll do upon our return, but it might involve shoving a viola bow up a superintendent’s heinie. 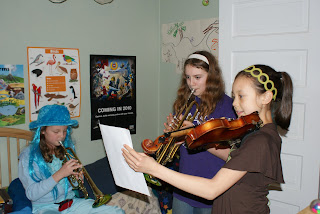 Spontaneous ensembles surfaced throughout the evening.  You should hear their “Theme from Star Wars.” 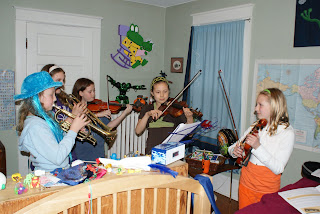 For Girl, there in the orange and white (did I forget to mention that each girl came dressed in a lip smacker flavor, and then everyone had to guess what type of num she was?  Girl was Orange Creme), playing instruments with friends was her dream gift. 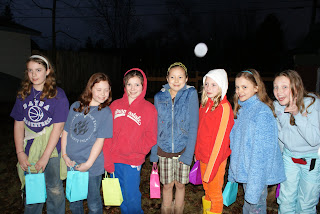 Pinata time out back…moments after this photo was taken, the skies unleashed torrents of rain and Berry Berry Burst lip smackers. 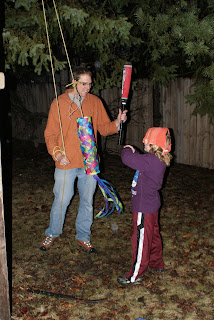 Paco takes a whack at the pinata.  Kirsten made it out of two Quaker Oats containers duct-taped together.

That right there explains why I like her, ja? 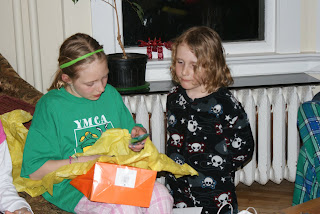 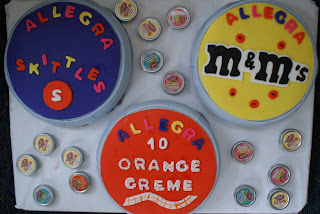 All of you scary stalker pree-vert Interwebs types need to NOT see the name on these cakes…but they’re just so fabulous, and I’m so bad at Photoshop, that I had to put up this unedited photo of them.  Isn’t fondant rockin’? 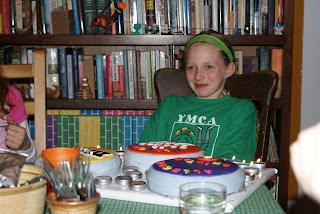 Here’s what I want to shout, “Look, Kirsten, how happy you made our Girl! You own a piece of her now!” 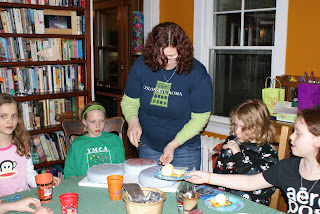 Kirsten was worried about managing to break through the protective cake shield that is fondant…but the slicing went easy as pie.  Er, cake. 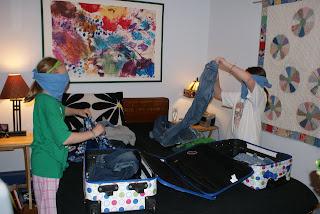 Girl wanted to play a packing game during which a blindfolded packer has one minute to fill a suitcase as fully and neatly as possible.  We went through multiple heats and got startling insights into some characters.  Just a heads-up to the world:  there’s a ten-year-old named Kiana whom you should hire for any precision work you might ever have.  However, as her employer you might also have to pay a substantial amount towards her anti-anxiety medication, as well.  Fair warning. 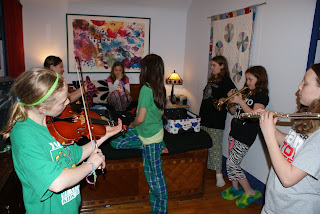 And of course, what did the audience do in between heats of the packing game? They diddled out a little “French Folk Song.”

In fact–and I was about to type here that “they went on to diddle until 3:30 in the morning,” but realizing the various ways that phrase can be construed, I refrained–the crew of them didn’t go quiet until 3:30 a.m.

They were aiming for 6 a.m., but since two of them were being picked up at 7:30 in the morning to go play in a basketball game, we insisted on some sleep.

At 2 a.m., I started getting threatening. And tired. Really tired. The kind of tired that makes one wonder where she’ll find the assertiveness to rein in a flock of giggling 4th graders.

In the form of a new friend. Kirsten drew upon her theater experiences and, sitting right outside the girls’ bedroom door, acted The Enforcer. Using a deep, strong, scary teacher voice, she called out “GIRLS! YOU NEED TO QUIET DOWN NOW!” every few minutes. Eventually, after 3 a.m., when the whole thing was distintegrating, she gave them:

“KIANA. AMY. EMMA. I HAVE ANOTHER BEDROOM READY TO GO, AND IF YOU DON’T GO TO SLEEP NOW, I’M PULLING YOU OUT. DON’T MAKE ME PUT YOU IN A RELOCATION PROGRAM.”

With that, the place fell silent, the cadre of friends abashed enough to allow sleep to overtake them.

And with that, my new friend and I, laying on our bellies in the hallway, collapsed into giggles

birthdays, friends define us, Girl, they cut the music program

22 responses to “The Kids Are on Spring Break This Week, Which Means I’ve Been Playing with Clay and Moon Sand and Building Towers out of Blocks and All Sorts of Other Things That Aren’t Blogging–Which Pretty Much Explains Why This Post Is Heavy on Pictures”