I Never Can Say Quite As Much As I Know

The thing about attending an academic conference is that the days are packed so full of sessions and readings and “plenaries” that participants find their time booked from early morning until dusk. When attendees have taken several flights to reach a major cosmopolitan city, only to sit in generic classrooms for 14 hours each day, a feeling of “So why did I come to this major cosmopolitan city anyhow, if I’m not ever going to see any of it?” sets in.

When the attendee is someone who loves the vibe of an urban center, who hates forced conviviality with people she’ll never see again, who dropped out of high school because she didn’t agree with the rules about how her time should be spent, and who generally doesn’t play well with others, well,

I believe we call that a recipe for Playing Hooky.

Certainly, I put in my time at the conference sessions, and I genuinely enjoyed hearing writers read their work out loud. That is a very unique pleasure. In fact, after hearing one woman read her story to the convened group—and being blown away by it—I found that story online and re-read it. It wasn’t nearly as wallop-packing on the printed page; hearing it in her voice, with her accent and pauses, imbued the prose with much of its power. Her reading made me want her to be my mommy.

However, after about fifteen hours of trudging from room to room, smiling at people whose names I didn’t know, every voice became nothing more than a grating clack.

The hour-long bus ride back to the hotel was a din of clacking (“He’ll sleep for two weeks after this”), clacking (“We don’t have that bank in Bermuda anymore”), clacking (“I should have worn different shoes; these have rubbed blisters”), clacking (“The tour to Niagara Falls took all day, and all I got was wet”), clacking (“In China, the punch line is that the woman forgot to wear her shirt, not her pants”).

Quite deliberately that night, I didn’t set the alarm. Quite deliberately that night, I watched home improvement shows (on cable, using a remote, on a flat screen tv—all things we don’t have at our house!) until 3 a.m. Actually, at 3:10, I caught myself crying at something Ty Pennington had just said about the Very Special Family whose house was about to receive an extreme makeover. Uh-oh. While snappy television shows were acting a balm to my “dialectically-exegesis-ized” brain, clearly it was time for a self-intervention. With the flick of a button, the shadows stopped flying through the air.

The next morning, nearly lunchtime really, I cracked an eye and exhaled a happy “ahhhhh” when I realized I was alone, in the quiet, without a clacker or his recently-anthologized essay within throwing distance. After a winding, dodging run around the waterfront area, I found myself eating a plate of kebabs while watching a World Cup match surrounded by Arabic speaking men. Now that was my kind of num and clack.

Well fueled, I was off to the Bata Shoe Museum, a place I one day hope to take my husband (he who maintains shoes are one of the evils of the world); it’s not that I want to subject him to something he hates—a sport in and of itself—but more that the museum was surprisingly rich in impact. The place starts with the earliest known shoe (the one found on the foot of the Ice Man who was excavated in the Alps in 1991) and continues throughout time and across cultures, explaining how shoes were made in various places and why they were constructed as they were. For the exhibit of Elton John’s 12 inch sparkling platform wedge, however, there was no possible explanation.

Once the shoes were being tucked in for the night, I headed over to half-price Friday at the Royal Ontario Museum, which is the fifth largest museum in North America and first in my heart for mind-blowing awesome crystalline shape: 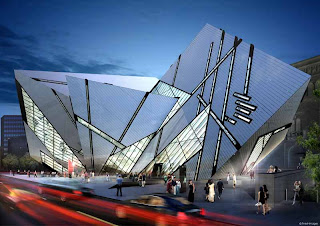 The architecture is tremendously exciting from the outside, but once I was inside and had meandered around for an hour, I started to realize its drawbacks, especially after I’d traipsed across metal grated crisscross walkways a bunch of times and still couldn’t find the dinosaurs. Indeed, this museum proved unerringly that I should be hired as a bug tester for any venue that wants to proclaim itself “easy to navigate.” Give me ten minutes, and I’ll be lost and shouting, “A person would think she’d eventually stumble across the full-sized skeletons of the T. Rex and Diplodocus, if only she walked across these crisscross metal walkways long enough and followed the ‘helpful signage’!” This proving wishful thinking, I did enjoy visiting the Asian Artifacts display four times.

With the museum being so huge—and the exhibit of early Canadian furniture being so fascinating (gawking at furniture is like gawking at shoes for me: I get taken inside the thinking behind certain practical creations and see the wider world they reflect)—I realized it was nearly time for the conference’s evening reading, featuring Li Ang, Alistair MacLeod, Robert Olen Butler, and Margaret Atwood, yet I had a few more galleries to discover, and I’ll be damned if I was going to return home and tell my seven-year-old I’d missed the fossils. That’s the kind of omission that could result in life-long love diminishment, the kind that not even a wooden catapult purchased in the museum gift shop could overcome.

Incidentally, you wouldn’t believe the variety of objects we’ve shot across our living room this week: clay, little bouncy balls, metal washers, Lego figures, even gift-wrapping bows. Next on the list are Cheerios and fingernail clippings.

Eventually, I was done with the museum and began to hoof it to the public library for the reading.

Of course, I’m never sure I’m going to end up somewhere until I actually get there, and not only because I get lost so easily but also because there is so much that makes my head swivel between any two given points. Like shops. That aren’t Target. With skirts and tunic shirts and yoga pants. Which are very soft. And comfy. Soft and comfy clothes don’t clack at all.

Plus, since I was already running late, and since there were four readers, and since the program clearly would build to Margaret Atwood, I decided to give each shop its due.

That’s why I was buying underwear for Paco at The Gap exactly when Margaret Atwood was reading.

In my defense, I’d point out we don’t have The Gap or underwear in the United States. Also, I lie a lot.

Stuffing the underwear and a silky skirt into my bag, I finally slipped into the library an hour late, just in time to listen to the pleasing and mellifluous voice of Alistair MacLeod from my perch on the floor in the back of the room. The measured pace of his words, coupled with the burst blood vessels in his nose, took me back to some of my favorite professors in college.

After MacLeod, the last reader was Robert Olen Butler, who won the Pulitzer in 1993 for A Good Scent from a Strange Mountain. He read his “Jealous Husband Returns in Form of Parrot” to great reception, largely due to his clear experience in hitting the punch lines and imitating a squawky bird. It was a very adept reading, but I was left unsurprised that Butler is thrice divorced, having gained particular notoriety after his third wife left him for Ted Turner and he (Butler) subsequently sent out a highly-personal and startlingly-revelatory email to students and colleagues at the college where he teaches (here’s the text of that email—a link worth following).

Finally, all four authors returned to the stage and participated in a question and answer session, which gave me the opportunity to partake in some Famous People Watching. Pretty much, it took all of two minutes before I tried to detect an underlying tension between Butler and Atwood–perhaps once a romance but now lapsed into “too many readings done together” or “you’ll probably just leave me for Ted Turner anyhow, so why bother.” There was nothing overt, but everytime Butler would take on a question and come across as perhaps a tidge too full of himself, Atwood would step in with a follow-up that began, “On. the. other. hand…” It became a joke by the second go-round, but I did want to read both of their diaries just to tap into secret grudges.  That shouldn’t be too hard to do with Butler, as I’m sure he sends out a daily email detailing his antipathies to 55 of his closest friends and favorite strangers.

Anyhow, Atwood comes across as both wry and gracious–and in possession of a healthy set of boundaries (her Website contains an entire section that begins “Dear readers, publishers, and fellow writers: Here are some guidelines about what I, and the office, can and cannot do…” and then lists things like “I cannot write an introduction to your book”).  After looking over her Website, I rather wish she’d write my syllabus for me, though.

Despite the charms of the writers and the joys of people scoping, I was more than ready to grab my bag of undies and trek back to the hotel, grabbing a curry along the way.  As I worked my way down Yonge Street, pushing through the crowds of Friday night street life, I considered the sheer loveliness of listening to writers–both published and unpublished–read their work aloud.

So much of today’s communication is quick, random, and unthinking that I felt, thanks to sitting in on various readings at the conference, like I’d just set down my dessert fork at a rich and lengthy banquet after years of eating only Big Macs.  In this age of texts and 140-character limits, in a time of quick messages devoted to arranging logistics or reporting updates, I very nearly needed to burp with pleasure after having been privy to words crafted carefully by someone who had sought out solitude, time, and peace as pre-requisites to thought

–thought preceding the commitment of ideas to paper

–and that commitment the precursor to re-reading and editing

–which must come before revising

–sharing an essential part of engaging an audience

–thus harnessing the personal power that is talent.

I returned home the next day with more than underwear and a catapult.

I came home with inspiration.

academic conferences are vewy tiwing, author as parrot, the awesomeness of underwear, where did all the dinosaurs go?