We’re in the Throes of a Frustrating Search for a Home and Have Only Two More Nights in the Pension, Which Means I’m Both Disheartened Yet Still Enjoying the Spectacle…Hence, I Call This Post ‘Snippets’

“We’re in the Throes of a Frustrating Search for a Home and Have Only Two More Nights in the Pension, Which Means I’m Both Disheartened Yet Still Enjoying the Spectacle…Hence, I Call This Post ‘Snippets’” 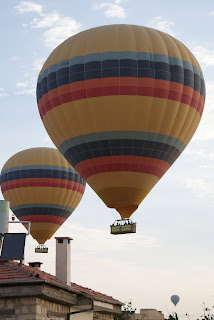 I woke up the other morning to the voice of a balloon pilot calling out to our neighbors at the pension, who were sitting out on their balcony, taking in the morning balloon launches. The pilot, hovering incredibly close to the pension, called out, “Can I offer you a cup of coffee?” 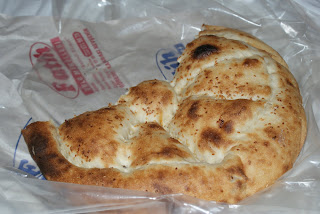 The celebration of Ramazan (as it’s called in Turkey) starts today: 28 days during which devout Muslims neither eat nor drink during daylight hours. They have one meal just before sunrise and one just after–and if that’s not an occasion for gluttony, I don’t know what is. Everyday’s Ramazan for Jocelyn, in that respect.

Anyhow, due to Ramazan, the village bakery was pulling fresh loaves out of their ovens at 6 p.m. last night, so that folks could load up on good food on their way home from work, shopping, gouging the tourists… We scored a steaming hot wheel of sesame bread, already a favorite of mine. When I took the picture above, though, I looked at it and thought, “Wow, it looks like Domino’s delivers in Cappadocia.”

A Turkish tradition during Ramazan is to have crews of drummers walk the streets in the hours before sunrise, banging on huge olive oil cans. As they pass each house, they call out the names of the inhabitants, along with words to the effect of “Roll your hungry belly out of bed, you layabout, and have a stack of pancakes. Then have an omelette. Maybe tack on some sesame bread and feta. Plus a nectarine, some figs, some mulberries, and a Snickers.”

Thus, between 2 and 3 a.m., the streets are literally being pounded by the feet of hollering drum crews; at 4:30 a.m. the first Call to Prayer echoes across the valley; and at 5:00 a.m. forty hot air balloons fire up their roaring propane jets and take off.

But get this: sure, I’m waking up for some of it each dawn, and a few times I’ve just stayed up, but mostly, I wake up, listen, register the activities, and then fall deeply back to sleep. Even my bones are tired.

All right, back to the day now. It’s market day in Goreme, and we need to ask every single person we encounter if they’ve heard of any rentals. So far, it’s looking grim, but we’ll expand our search to neighboring villages starting tomorrow.

food in Turkey and balloons everywhere

17 responses to “We’re in the Throes of a Frustrating Search for a Home and Have Only Two More Nights in the Pension, Which Means I’m Both Disheartened Yet Still Enjoying the Spectacle…Hence, I Call This Post ‘Snippets’”