Every Time I Visit The Place, I Drag Along Exponentially More Companions. In Other Words, Because I Don’t Know a Whole Lot of Folks Here, I May Need to Request Your Presence at the Kilise Before the New Year

“Every Time I Visit The Place, I Drag Along Exponentially More Companions.  In Other Words, Because I Don’t Know a Whole Lot of Folks Here, I May Need to Request Your Presence at the Kilise Before the New Year”
If my soul were on a quest, last week’s sunset run down a long, dusty road could have satisfied that longing. Had I been open to it, I could have been Saved in dramatic Falwellian fashion.However, since my soul rather revels in the liberties of its heathen state, the long, dusty run was merely cause for a loud “Well, looksie-do at what I done gone and did!”
You see, there’s this church.
It’s located at the end of a long, dusty road, and the guidebooks tout it as a particularly fine example of one of the earliest Christian churches due to the relatively-untouched state of the frescoes on the ceiling. Heathens or not, Groom and I do like to gawp at pretty paintings, so we decided

–based on our relationship’s decade-long experience of my being unable to locate my big toe while he, blindfolded, bushwhacks a course through brambles and bat caves from our house to the next town–
to have him follow the guidebook’s instructions and navigate his way to the thing first, after which he could return home triumphantly and translate the directions into Jocelyn-friendly verbiage like “You’ll run straight for as long as it takes you to hum the refrain of ‘Tainted Love,’ and then turn left just as you’re starting to wish you had a Kit-Kat in your pocket and follow that until you start daydreaming about how likable Ellen is when she dances at the start of her show. At that point, you’ll just need to keep going a little bit further until you see a big rock on your right that looks like Shelley Winters did while she was holding her breath and swimming in The Poseidon Adventure. Just beyond that, you’ll see something that looks like Keebler Elves live inside it. That’ll be the church.”
This was the plan, anyhow.
The reality had Groomeo getting up early, running for an hour and a half, and then returning home to announce, “The Rough Guide doesn’t know its copyright from its Library of Congress number; once again, its information is patently false.  I followed their directions to the letter, and no church.  I found nothing.”
Because I’m often concerned with peeling a banana or brushing the hair out of my eyes, I sometimes don’t track all the details of every situation.  “So your run was nice, then?” I asked in response.  Sensing that might not have been completely the right response, I tacked on, “You sure are handsome when you’re sweaty.”
Once I cleared my eyes and smooshed the banana around on my soft palate, I did register that Mein Beloved had not found an old church.  Or had not found something vaguely church-like.  Maybe he hadn’t found a museum.  But didn’t my hair have sensational bounce and volume?
Ten hours later, as dusk considered relaxing upon us, I headed out for my own run (banana-free, but teeming with hair, incidentally), with nothing more than a merry “hi-ho, hi-ho, it’s off to run I go” dribbling through my noggin.
Thirty-five minutes later, though, the dribble slowed, and my thoughts went more, “What ho?  Is that a Keebler Elf house I see in front of me?”
Yup, seems I’d turned off my brain, clicked to auto pilot, and started moving my feet…directly to the Pancarlik Kilise, featured in The Rough Guide as a remote church worth hiking to if one enjoys a good fresco.  All it had taken was a quick jot up to the village overlook, trailing off onto a path leading through a grape orchard and squash garden, turning left at a T-bone, veering right at the fork, and always sticking to the wider road when a decision arose, finishing out with a hard left at the rusty arrow.
You know, kind of like Shelley Winters did in The Poseidon Adventure.  Minus the granny panties and dramatic death scene.
That evening, as the sun slanted sideways across the valley, I gasped a little, and not only because I’d arrived at the church after hours and, therefore, didn’t have to pay the 4 Turkish Lira entrance fee.  Entranced, I peered through the locked gate of the church and then spent half an hour hiking around the monestary and chapels.
Just as it became fully dark, I dashed into our house and announced to Groom, “Oh my God.  I found God.  Or at least, like, His house.  From back when He was a starving artist.”
Emboldened by my sheer luck, His Groomishness followed my directions the next day–particularly appreciating the “look for a rusty sign that will remind you of the color of Ron Howard’s hair” tip.  He, too, was awed by the valley and the notion that so many hard workers and followers of…who is it?…oh, yea, Christ…had been there before us.
A day after that, I snared Girl’s attention with my tale of fortuitious rambling, and she and I walked the 4 kilometers out.  Ten minutes in, we were stopped by a farmer and his wife who were loading up their daily harvest and about to head home for their fast-breaking Iftar meal.  Pressing a wad of newly-picked grapes upon us, they stroked my Girl’s hair and asked her age, which is how she has been greeted by virtually every Turkish adult.  With admirable patience for a ten-year-old from The United States, she forbore the stroking and answered with a smile. 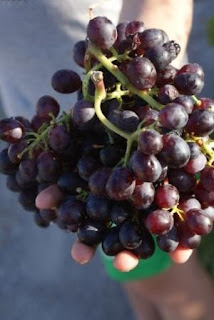 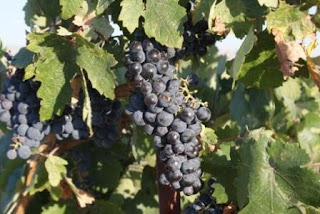 Ten minutes later, spitting grape seeds into the dust as we walked, Girl turned to me and asked, “Is it okay if I just run?”
Speechless, remembering my formative years spent on a mustard-colored couch in the basement watching The Addams Family from a position of Permanent Horizontal, I urged her to cut loose and fly. 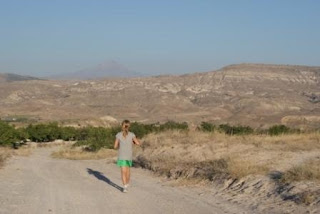 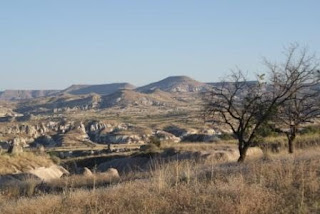 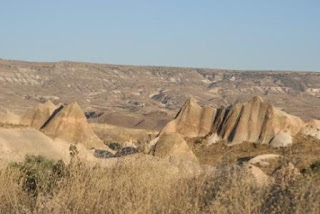 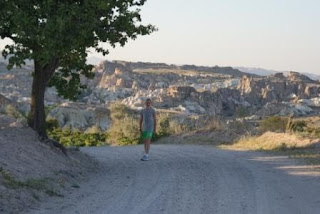 Trotting behind her with a fist full of grapes and a camera bag bouncing on my hip, I became lost in a dusty sea of Holy Moments, surrounded by the crags, hummocks, desolate trees, and dappled sunlight that comprise my personal notion of a place of worship. 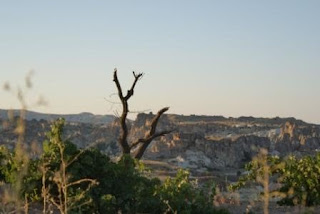 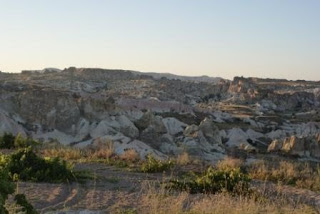 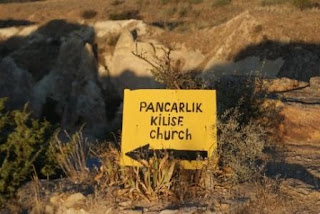 And then, just past a rusty sign the color of Ron Howard’s hair, we saw the sign. 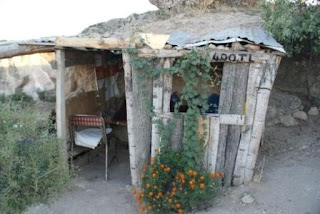 Again, it was after hours. Again, the entrance fee was waived by default, although why the ticket seller would ever want to leave his rustic office is beyond me.

At this rate of savings, we’d be able to afford to have a family-sized pizza delivered that night. If only there were pizza. And delivery.

Alone with the setting sun, we clambered around and through the chambers carved by monks into the rocks carved by the more lasting and forceful hand of erosion. 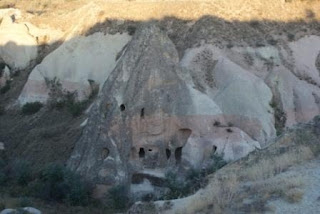 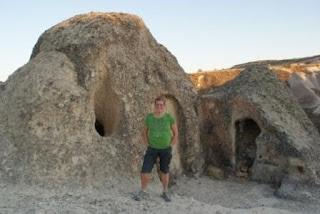 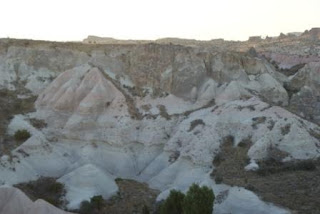 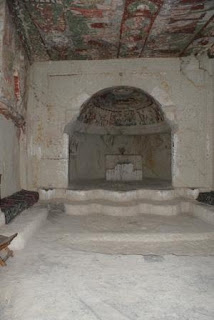 The main chapel is gated off after hours, but that didn’t keep me from shoving my camera through the bars for some snaps.  Outside of the chapel, everything else is permanently open for the climbing.  So we did. 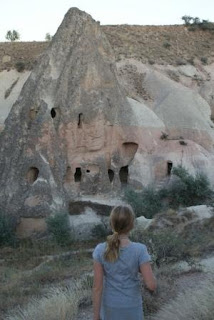 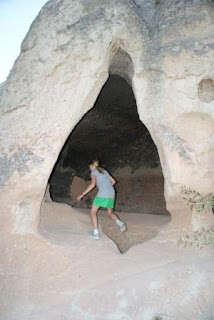 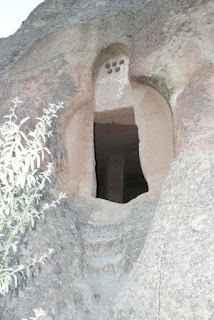 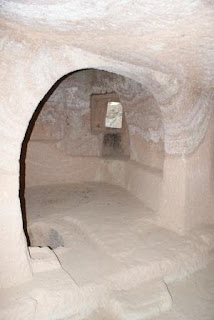 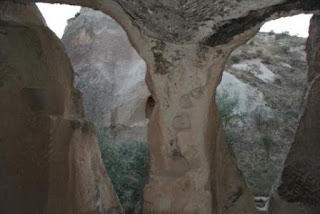 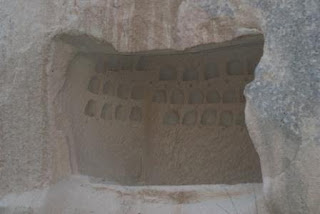 Several nights later, we went back to Pancarlik Kilise, this time with Paco and a new family friend in tow.  This new friend is Steve Farbes, a doctor from England who is in the early months of a five-year journey.  As a tropical disease specialist, hes taking this time to bicycle around six continents to raise funds for a disaster relief organization (Turkey marks Steve’s transition from Europe into the Middle East before he eventually heads down the east coast of Africa and catches a boat to the tip of South America, at which point hell work his way northwards to Alaska–thereupon catching a boat to Japan and cycling Asia).
How did we meet Steve so that we could drag him towards a rusty sign the color of Ron Howard’s hair?
Well, I do have this leetle problem called jabbering at strangers.  During a year of living abroad. we’re seeing fit to reclassify this “problem” as a “boon” because it’s already netted us several valuable social interactions, such as the one we scored with Dr. Steve.  You see, we’d taken a day to meet up with our friend Christina and go swimming back at the pension where we stayed our first nine nights in Turkey.  As we were leaving the pension that afternoon, I overheard a guest asking where he could store his bike gear.  Having noted some posters in the village regarding a mountain bike race the next day, I assumed he was a participant, so I hauled my chlorine-scented self over to where Bike Gear man sat nursing the local beer, Efes.
“Say, are you racing tomorrow?  I’ve seen the posters and am trying to figure out the race course in the chance that my family and I could get a gander at the thing.”
Nope, he wasn’t racing–had just seen some bikers training in the village on his way in, as a matter of fact, and that was the first he knew of it.  Rather, Bike Gear Efes Drinker turned out to be Dr. Steve, and, well, you know the story on him already.
After we chatted for a few minutes, I urged him to come visit our village during his stay in the area, to come for a meal, to come disrupt the family dynamic of Just We Four that some days feels unrelenting.  His email and blog addresses in hand, I left him to pick at the skin peeling off his nose and lips.
Two nights later, he biked over to our village, and we all mounted the next Pancarlik Kilise expedition. 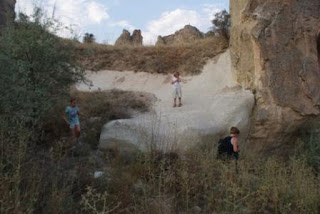 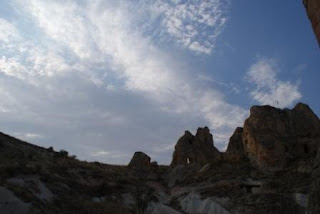 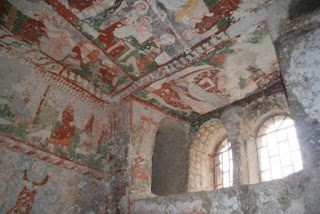 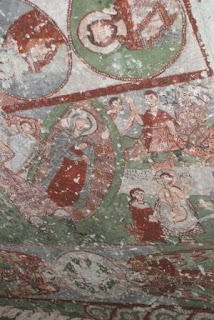 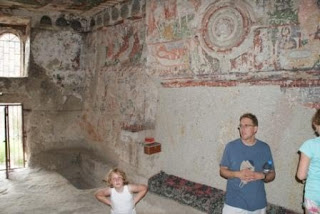 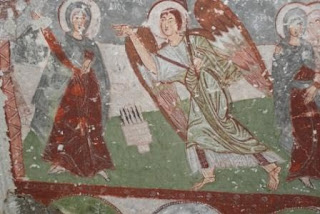 The church is notable because many of the painted figures still have their faces intact; back in the 8th-9th Centuries, a split happened in the Christian church regarding the use of “graven images” and “idolatry” (look up Byzantine Iconoclasm for more detail).  Essentially, there was a big disagreement about whether or not any images/symbols beyond that of the cross should be allowed in places of worship.  Those against the inclusion of human representations in churches sharpened up all their pokey things and went around stabbing out the eyes of the figures painted on the ceilings of thousands of churches.
Frankly, such sturm und drang in the name of Who Best Acts Best pretty much makes me want to toss all The Pokers into a serious time-out and then retire to a quiet hillside and stare peacefully at a blazing orange ball of sun as it descends behind a mountain.
All the better if Shelley Winters’ granny panties perch on a nearby rock, enjoying the moment with me in communal silence. 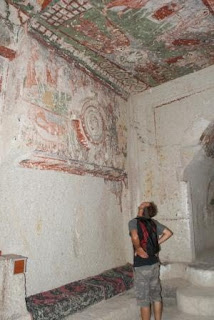 Here’s Dr. Steve, acting out the phrase “to crane one’s neck” (if you have it in you, I’d urge you to visit his spunky, entertaining blog chronicling his five-year adventure and leave him a comment, as the blog and its comments are his primary contact with the outside world) 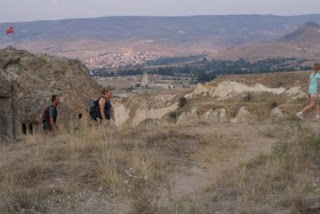 Eventually, we headed out of the frescoed church, into the open air, feeling quite fortunate to be in this place at this time, 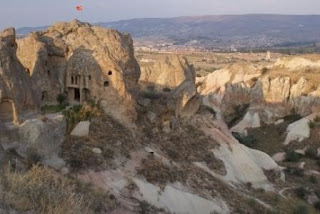 privileged to cast our intact eyes upon all that had been wrought before us.

a cathedral with open-air acoustics, a churchgoer after all

17 responses to “Every Time I Visit The Place, I Drag Along Exponentially More Companions. In Other Words, Because I Don’t Know a Whole Lot of Folks Here, I May Need to Request Your Presence at the Kilise Before the New Year”