And Under It All, She Was Wearing Really Sassy Leopard Print Ballet Flats

“And Under It All, She Was Wearing Really Sassy Leopard Print Ballet Flats”

We’re on an eight-day trip to Parts of Turkey As Yet Unseen, and I’ve been fighting for hours with the Internet access here at the guest house, so I’m just going to slam this thing out into the ether during my three minutes of connectivity (albeit “very low” connectivity–akin to how we feel back in the village of Ortahisar).

My husband’s parents flew in from Minnesota this week, and so we’ve come to Istanbul to meet up with them.  Here, in Istanbul, the lot of us has remembered how much we like a big city; in a way, coming here feels like re-entering the real world after floating around an extended dream.  Don’t get me wrong:  life in Ortahisar has its benefits, and it’s been providing us with more authentic experiences than we get in Days as Tourists…but for now, during these Days as Tourists, we’re just having a really good time.

Let me put it this way:  after seven weeks of Nescafe, I’m currently drinking a latte from Starbucks.  In the States, I don’t so much like the Starbucks.  But here?  After Nescafe?  Starbucks is my new boyfriend.

So, yes, we’re seeing the sights of Istanbul–yesterday, the palace of the sultans (called Topkapi Palace) and the Grand Bazaar (everybody high five me for bargaining twenty lira off the price of my new wool shawl!); and today, the spice market and the underground Byzantine cisterns.  We’ll be here until Monday night, at which point we’ll take an overnight bus to the Black Sea coast town of Amasra for a day and a half, and then we’ll head to the national capital of Ankara, which has an apparently kick-ass museum (The Museum of Anatolian Civilizations).  Then we’ll head back to Cappadocia and show our new favorite places to my in-laws before they head off alone for a few days on the Aegean.

I’m about to head off for a run here.  Groom ran along The Bosphorous yesterday and saw ten whole other runners, INCLUDING A WOMAN.  So hear this, Turkey:  I’m not the only one.  There’s that other gal, too.  Stare at her, wouldya, and leave me alone?

Yesterday, at Topkapi Palace, I spent some time watching the woman in the photos below.  I’m guessing she was on her honeymoon (this palace is a hub for many Muslims, as it houses one of the world’s greatest collections of Islamic relics) as she and The Bearded Hubs were holding hands.  Don’t tell him, but I saw her hand!  I saw his wife’s hand! And it was HAWT.  She definitely seemed to be in charge in the relationship, leading him around, taking off by herself, setting the pace.

Mostly, what I noted, outside of her spirit of independence, was how perfectly the drama of her burka suited the ancient palace, with its ceremonial chambers, treasury rooms, and harem.  Her fabric flew in the wind when she walked, and her presence fit the place ever so aptly. 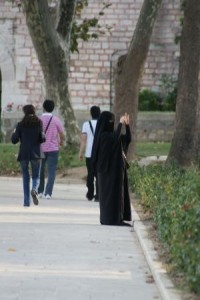 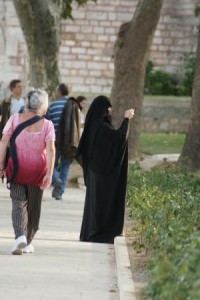 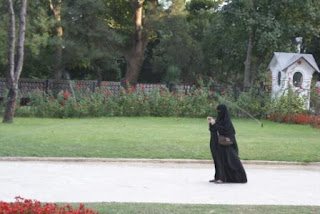 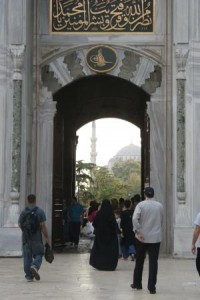 What do you think?  Would the camera be an extension of her usual vision–or might it feel like yet another obstacle between her and the air around her?

the prophet Mohamed’s footprint was there too and so was the prophet Moses’ rod (and by that I mean staff you guttermind), through a lens darkly

15 responses to “And Under It All, She Was Wearing Really Sassy Leopard Print Ballet Flats”