Unless it’s wafting past the Wall of Whips in a high-end pleasure dungeon, the smell of burning rubber is never the precursor to a good time.

Thus, it was unfortunate, as the bus traveling between Istanbul and the Black Sea coast chugged up a hill, that the smell of burning rubber grew in intensity. Moments later, all fifty passengers started exchanging uncertain glances, casting about for confirmation that the vehicle had, indeed, just ground to a stop right there on the highway.

In Turkey, the first response to such a situation is for the bus steward—he who had been serving Pepsi, tea, Nescafe, and Little Debbie-quality snack cakes over the previous two hours—to walk up and down the bus aisle spraying the floor with air freshener, the underlying hope being that collective denial (“Whaaat? I don’t smell anything. Except maybe some sun-warmed daisies waving near a mountain spring, that is”) will somehow revive the dying engine, that source of noxious odor. Sadly, even dreamy alpine scenarios and freshly-spritzed ankles didn’t counteract the reality of one big dead bus plopped onto the shoulder.

After watching the driver, baggage attendant, and steward gather in a circle, take out their cell phones, and act vaguely panicked, we passengers started to key into the fact that this was no easy case of Jes’ Let Her Sit Quiet-Like for About Five Minutes and Then Jam the Clutch In Real Hard and Off She’ll Bolt. As the temperature inside the bus crept up 11 Celsiusian degrees, women in head scarves, teens in tank tops and unfortunate mullets, old men with canes, and six sweating Americans climbed off of and back onto the bus, alternately seeking breeze and shade. 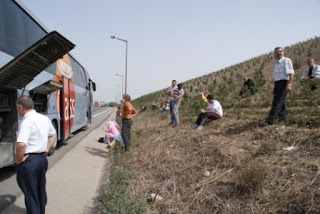 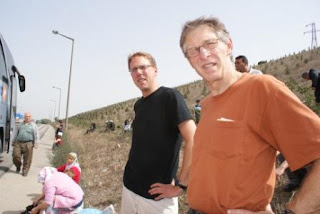 Seeking breeze. Do you think they might be related?

Twenty minutes into the stall out, the baggage attendant in his crisp white shirt disappeared behind a folding door, re-emerging in a navy blue sweater—an act that made the tiny person who lives inside my skull shout, “See how we are all ONE? That’s totally what I do, too, when it’s edging up past ninety degrees and the car’s gone kaput! I put on my best navy blue sweater and go stand on black asphalt!”

Once the tiny skull smartass seated herself on a Eustachian tube and shut the eff up for once, I was able to see that Sweatered Baggage Attendant seemed worthy of a subtitle, namely Troubleshooter with a Wrench Who Is Smart Enough to Cover Up His Tidy Whites Before Getting Near Oil. First, he, sweater, and wrench went and banged around the side of the bus for a few minutes. Because every job performed by males in Turkey requires one man to take action, one to stand nearby and provide moral support, three onlookers to discuss other options and methods, and at least one know-it-all drinking tea to imply that he’s done this task before, better, and would do it again—quite adeptly—if only he had a navy sweater, a crowd congregated, until only an elbow of navy could be seen from outside the cluster. After the time it takes moral supporters, onlookers, and know-it-alls to smoke two cigarettes, the elbow grew in size, until Baggage Attendant’s torso emerged. Luckily, his pelvis and legs weren’t far behind.

Shucking his helpful crew, Baggage Attendant, sweater, and wrench hopped up inside the bus, excused themselves past a cadre of sun-sensitive ladies (plus one Paco), and knowledgeably ripped up a huge floorpiece in the back third of the bus. There, now visible from the top, was the engine. Who knew such a thing was possible? Certainly not this sun-sensitive Jane Austen reader who only understands wrenches of plot, not steel.

You can imagine the genteel gasp that issued forth from my bosom, then, when Sweatered Baggage Attendant suddenly dropped through the floor into the engine and began whacking about. Shouts of encouragement and advice from his support crew carried through the carburetor and, um, gasket-things, lending him strength, courage, and the hope of a lint-free jumper. 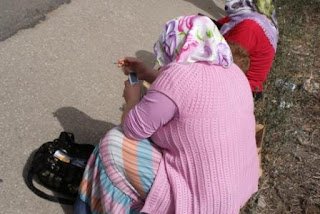 Eyes scanned the horizon, looking for a relief bus. Sweatered Baggage Attendant twittered around the engine pit for some time, looking dapper if uncertain.

Meanwhile, delighting Austen readers and headscarves alike, the bus steward applied himself to working hospitality magic. Up and down the prickly terraces of waiting passengers he roved, toting a big bottle of cold water, filling, refilling, chatting, joking, attempting to convey comfort to the American passengers with his six words of English. 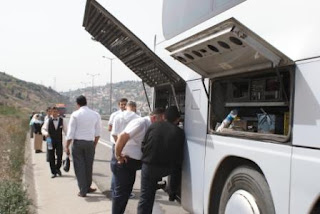 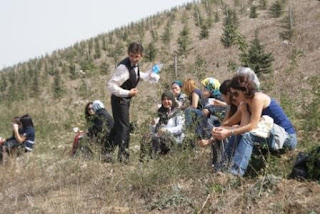 Reader, I married him.

Oh, all right. I bet all the tiny people who live in your skulls are caterwauling right now that Jocelyn’s already married, and she only gets one husband at a time, or no fairsies.

Reader, I contemplated adopting him, but mostly so he could be my houseboy.

Just as the Houseboys R Us social worker was helping me fill out the paperwork, though, I got distracted by the sound of a bus engine revving and the sight of the baggage attendant back in a crisp white shirt.

Two kids are enough, anyhow. Plus, adopting a child in his 20’s would—rimshot, please—throw a wrench into our family’s works.

Suddenly, it seemed easier to jump aboard the bus and relax as the thermometer dropped two degrees in the course of the next hour. Eventually, we pulled over at a restaurant stop and were urged to eat chicken sandwiches for a fair bit, until, like Mr. Darcy astride a white charger, a new, reliable Metro bus pulled up and reversed our hapless fortunes. It didn’t hurt, either, that the much-beloved steward welcomed me to the new bus with an apology called Heaping Stack of Snack Cakes.

Three hours after our planned arrival time, we finally got to the bus’ stopping point. Despite the lengthy day behind us, our family still needed to make a plan. We were sure the local mini-buses had stopped running for the evening, yet we’d hoped to transfer ourselves from the larger city of Bartin to the smaller town of Amasra (our ultimate destination). With no accommodation booked nor means of getting to where we were going, we realized the Metro bus company had done its job, but we were about to be deposited in the middle of a parking lot at a deserted bus station on the outskirts of an unknown city.

Just as we were starting to yank at our luggage with controlled desperation, my almost-adopted son–Süpannalah!–bustled up and pointed over his shoulder, “Mini-bus. Amasra. You go.” There idled a smaller Metro bus which whisked us to a spot in town where we were subsequently shuttled on to the last dolmus of the night to Amasra.

Thirty minutes later, as that dolmus pulled into the coastal town we’d been aiming for all along, the kind-faced woman sitting behind me tapped my shoulder and asked, “Pension? Pension?”

The dolmus stopped; we all got off; she walked us down the road 30 feet; we took a gander at the pension while our kindly dolmus helper faded off into the darkness…and suddenly the six of us found we had rented a four-room, three-bathroom apartment to the tune of about $70 per night.

By 10 p.m., we were eating fried egg sandwiches, sniffing our ankles appreciatively, drinking beer, counting up the five buses we’d been on that day—from hotel shuttle to first Metro bus to second Metro bus to mini-bus to dolmus—and absorbing one of Turkey’s best lessons:

even when things don’t work out as planned, they work out perfectly just the same.

P.S. Two days later, when we left Amasra by bus, we saw our same adorable bus steward at the main station. He had to run over for handshakes and an exchange of “Ah, what times we had” communicated with virtually no common language.

P.P.S. Throughout the entire day of twelve hours on five buses, including a breakdown, the kids didn’t make a distressed peep or issue the smallest complaint. My point here is that if anyone ever wants to say a thing against either one of them, I reserve the right to face slap.

P.P.P.S. My in-laws are visiting us for a few weeks, which is why there were six of us. They didn’t complain either, so beware my slappers.

P.P.P.P.S. The biggest issue raised by this post, for me, was if, technically, it shouldn’t be “knows-it-all” rather than “know-it-alls.”

why do I not own a bow tie?