At the start of December, we made an advent calendar, a way of counting down to the Big Day.  Each of us took a little time to paint, draw, and glue our contributions. 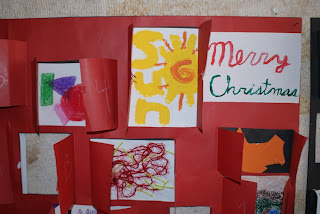 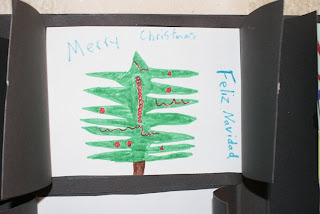 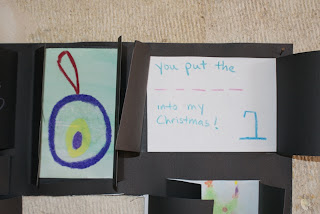 Groom’s little cartoon panels were my favorite addition to the calendar, so I asked him to scan them in and compile them.  If you haven’t been visiting his blog of our time in Turkey, do head over to http://www.layingfallow.com/:

In the last few weeks, as we’ve counted down the days, opening a new door on the calendar each day, we’ve also gotten together with new friends and made crafts, done some secret shopping, mailed off letters to Santa requesting specific gifts (Paco sent Santa, under separate cover, a question:  “What is your favorite kind of cookie?”  Santa replied a couple weeks later, surprising us with a note tacked to the fridge:  “Sugar!”), and put up the most hilarious fake Charlie Brown Christmas tree ever.  As someone who doesn’t particularly like the tree-mounting and tree-undoing aspects of the holiday, I was delighted to hang only a handful of ornaments on a tiny little bit of Not Much. 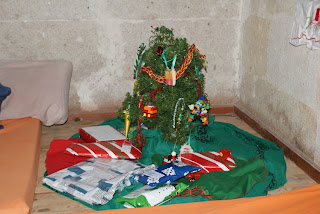 And now it’s Christmas Eve, and Paco swears he won’t sleep at all tonight.  I assure him, in a vaguely threatening tone, that Santa doesn’t come unless kids are asleep.  Our Girl is several years past Santa belief, so we anticipate she’ll conk out nicely.  As Paco riddled out how Santa is going to get down one of our chimneys, what with them being blocked by soba pipes (“Oh no!  Santa is going to get sucked into the soba pipe and get burned up!”), it occurred to us that, because we have two tons of the stuff to fuel the sobas, there has never been an easier year to put a lump of coal in someone’s stocking.

Note to self:  line stocking with plastic bag.

——————————
For our pagan-leaning family, the celebration is as much about The Solstice and sharing gifts and appreciating darkness and light and eating cookies as anything else.  However, despite my heathenish spirit, I find myself contemplating the power of Christ:

This week, as we sat in a government building in a city near our village, filling out form after form, walking from one office to another, paying fees, getting help from some friends with translating, chasing down our residency permits, we heard a voice ask our friend Gulcan, in accented English,

“These people you are with, where are they from?”

I lifted my head from an application form and saw a beautiful seventeen-year-old girl sitting a few chairs down.  While she had the exotic coloring and bearing of a Middle Eastern female, she wore a cross around her neck.  This poised teenager continued, “If they are from America, why are they here?”

Gulcan filled her in:  “They are applying for residency permits so that they do not run into any visa problems in the next few months.”

“No,” clarified the girl, “I mean why are they in Turkey?”

“Well,” Gulcan told her, “They want to learn about the country and culture and learn some language.”

The girl, still a bit confused, gave a small chuckle.  “So they came here on purpose and left America?  Are they Christian?”

Gulcan checked in with me (because it was nearing the end of the work day, I kept at my task of hurriedly copying down passport numbers onto four forms before the offices closed) on the religion question and then explained, “They are not religious. They will go back to America after some months here, but, yes, they chose to come here.  Why are you here?”

At that point, this girl gestured to her family, who were sitting all around her, “We are Iranian, and we are Christians.  We had to leave.  With secrecy and great difficulty, we have made it into Turkey and have gotten this far.  Now we are trying to get a refugee status so that we can be safe and try to make some money.  Our goal is to get out of Turkey and one day, God willing, get to America.  All we want is to get to America so that we can worship freely.  That’s why I can’t believe there are people here today, in this same place, who left America on purpose.”

To her everlasting credit, Gulcan (the owner of an inn) moved closer to the girl, wrote down her phone number, and, in a complete “there’s room at the inn” moment, had a quiet conversation about being paid under the table.

Eventually, our year here will end, and we’ll head to America.

and this is my wholehearted Christmas wish for these Christians on the run,