Realizing that a change of scenery in January is never a bad mental health strategy, we’ve launched ourselves on a somewhat loosey-goosey week-long trip around the Hatay region. Think Southeastern Turkey. Think near Syria. Think Mediterranean. Think renowned for food. Think no hotels booked in advance. Think buying bus tickets as we go.

We left Ortahisar yesterday at 8:30 a.m., took a mini-bus to the nearby town of Urgup, got tickets for the one-hour bus ride to the larger city of Kayseri, waited in the bus station for a couple of hours, and then hopped on a five-hour bus ride to one of Turkey’s largest cities: Adana.

Once off the five-hour bus ride, we had a half hour mini-bus ride to the center of the city and then a slightly shell-shocked twenty minute walk (rolling bags behind us as we fought through rush-hour foot traffic) to the first hotel listed in the guidebook. It was nice enough, but not completely “budget” in price. Fortunately, despite their assertion that their rates are fixed, we talked them down twenty lira, a drop which, when coupled with fatigue, worked the charm of securing our stay.

So we checked in, wandered over to the nearest restaurant, and spent an hour wading our way through approximately fourteen plates of food, only six of which were ordered. But they kept setting down bread and appetizers and garnishes and desserts. We could hardly tell them to stop.

No, literally. We could hardly tell them to stop. With our meager Turkish, we couldn’t possibly have asked them, had we the desire, to stop. The only polite course of action was to continue stuffing our craws.

It was an auspicious beginning.

Today, we walked along the river, goggled at one of the Middle East’s largest mosques, found a McDonald’s (speaking of needing to loosen one’s waistband), and spent a few hours trailing after the kids as they worked their way through several acres of playgrounds in the city’s main greenspace. On the way back to the hotel, we bought bus tickets Iskenderun, a port city on the Mediterranean, leaving tomorrow.

And then, still picking our way across the city, we ran across a “movies in 5D” storefront, and before we knew it, we were strapped into moving seats, being showered with fake snow, fighting off whiplash as we screened a short feature entitled Snow Ride. I only screamed a little bit when fake bats fluttered around my ankles during the abandoned mine sequence.

Lately, I’ve been yawning a lot, ready to sleep ’til noon each day. Groomeo has been joshing me that I was bitten by a tse-tse fly. My response to such joshing is a fierce and valid, “My. senses. are. very. stimulated. As a sensitive sort, I find I am very tired. So hesh up and go buy more bus tickets already, Mr. Unflappable Hardy Steady.”

As you may have gathered, both from this litany of Things Done and from the quality of prose you’ve just soldiered through, blogging energies run high in my heart and mind but low in reality.  Thus, rather than reaching for anything of substance to close this out, I will leave you with two photos taken today, as the kids romped the playgrounds.  For always and ever, I am most fascinated by the people around me–not the least of which were this lovely young woman and her companion.  His reclining position implies a recent meal at a Fourteen Plate Restaurant.

Perhaps the pink bucket by his head does too.

Anyhow, it’s so rare to see men and women interacting casually, talking and relaxing in public, that they held my attention.

Until the next thing did. 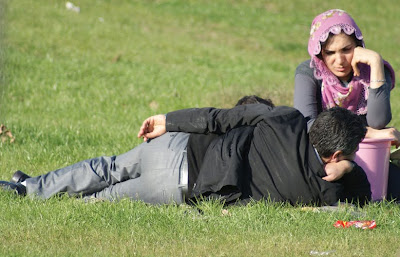 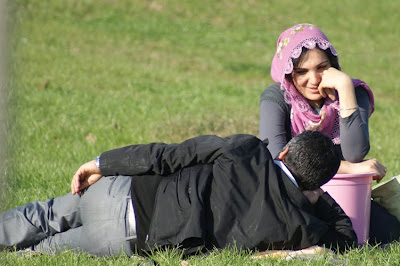 enjoying hustle, the thing about Adana kebaps is that the lamb is too gamey for me