On the rare occasions when I have walked into and through a Wal-mart, I’ve invariably hit the parking lot a half hour later feeling like I need a shower. The aisles feel grubby; the clientele appear unhealthy; the toxins projected by thousands of square feet of plastics induce malaise; the merchandise for sale only poses as “real.”

Hand me the soap already.  I’ll be needing the loofah, too.

In dramatic contrast are the feelings I had this past week, as we traveled around the Hatay cities of Adana, Iskenderun, Antakya, and Gaziantep, places where we zig-zagged the streets in a fashion that increased the odds of of stumbling across a homespun bonanza.  We would wander into a bazaar, see nothing but the usual factory-churned, interchangeable shoes, hoodies, brooms, saucepans, knives…and then we’d keep going.  After a bit, after turning twelve more corners, something would change. Things would become less predictable.  We’d see a man throwing loaves, glimpse a head bent over a shoe sole, hear the tick-tick-tack of a coppersmith imprinting a pattern.

One night, just after the sun fell and bitter cold started weasling its way into our bones, after wandering past temptingly-lit shops, we took Just the Right Turn, and suddenly my eyes were caught by something entirely novel: 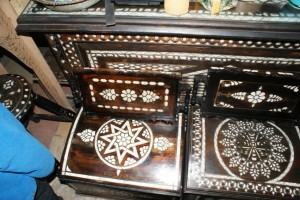 But there it was.  Fancy.  Intrictate.  Ottoman.  Appealing.

Wading our way into the crowded shop, we were greeted by the proprietor, Ahmet.  In short order, he was demonstrating the technique of sedef, from the hand-drawn design to the chipping away of the wood to the laying down of the copper wire to the shaping of the mother of pearl.  Perhaps more affecting than his clear skill and focus was his ability to explain it all in Turkish in a way that we, with our one hundred words of vocabulary, could comprehend.

So quickly, the situation was free of complications.  His words and hands synergized into a wow. 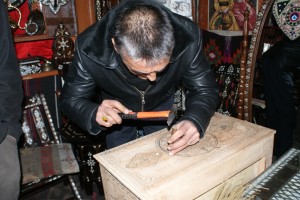 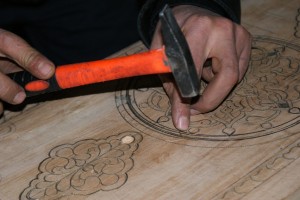 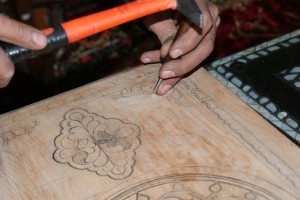 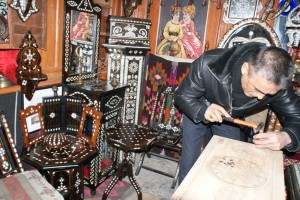 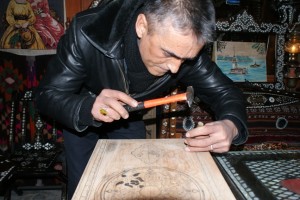 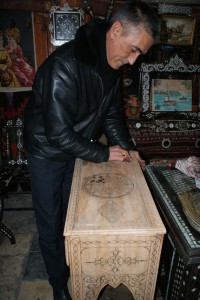 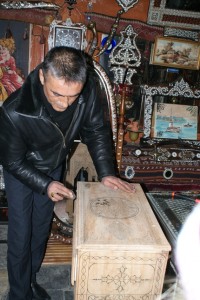 As we listened and attempted to keep our hands from coveting every item in the shop, I whispered to Groom, “This seems like the right place for you to use your birthday money and finally get that backgammon board you’ve been wanting.”

Instead of the five-thousand-fifty-five prefabricated sets we’d seen everywhere else, this shop only had five–each of them slightly different from the next.  Quickly, Groom differentiated them and found The One. 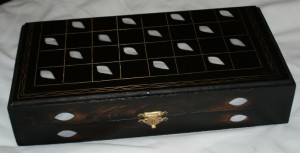 A day later, again as night fell and frigidity seeped beneath our fleeces, we pushed open Ahmet’s door.  With a broad smile and an “iyi ak?amlar,” I walked in to his shop, looked again at the tea tray propped against the wall–a tray using a design Ahmet retired after one use (take that, Dora the Explorer!)–and told him, “I’m back for that.”

Even though he didn’t understand me, he understood me.  Not even standing up from behind his table, he asked, “Would you like some tea?  Coffee?”  Oh, yes.  We would.

Half an hour later, much warmed, having discovered that his father also did sedef and that Ahmet’s favorite place in Turkey is a city called Mardin, which he favors because it’s a place where Muslim, Christian, Jew, Armenian, and Kurd all live together, shoulder to shoulder, in harmony, I pointed again to the tray.  “Can I buy this from you?”

Of course I could.  But first, Ahmet wondered if I would like to have my family’s names inscribed on the bottom of the tray, as a special memento.  Inlaying our names took twenty minutes, after which he knocked ten lira off the price of the tray. 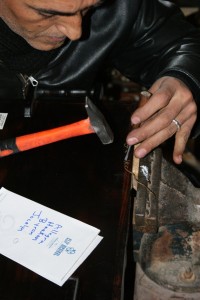 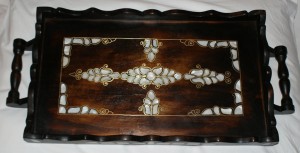 Pushing our way out in to the darkness and clutching the tray to my chest as protection from the wind, I thought to myself,

“Time to lose the soap and shelve the loofah.  This place, this man, this experience…I may never shower again.”

crushes on craftsmen and their crafts, one of several reasons I need to go back to Gaziantep, sedef better be cheap on Ebay