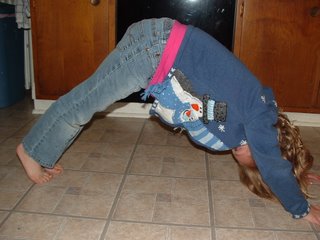 Frantic Yoga”
I may pride myself on being a hearty soul, but the truth is that I host a puny inner wuss, a very small person who lives inside me and who doesn’t like scary or creepy things like:
voles;
people knocking on my front door wearing crisp white shirts and neckties, travelling only in pairs, wielding a fistful of “literature”;
headless Barbies;
leggings underneath dresses;
lots of shots of Jagermeister;
J. Lo’s ghoulish husband Marc Anthony (leader of the Latin Vampire Cadre–“now serving blood-based salsa in the Green Room; all those with backstage passes, prepare to meet your fate”);
Texan housewives, with their big red mouths continually yacking and shellacked hairdos never moving, even under the duress of rhetoric blown at high, unthinking speeds out of their husbands’ mouths;
gaggles of Red Hat Society Ladies, out for tea, having rented a limo for the afternoon;
alligator on-a-stick (attendees of the Minnesota State Fair know whereof I type)
————-
Such things make me shriek like Nicole Ritchie, all smoked up, seeing flashing lights in the rear view mirror. And then we both grab our cell phones and call our publicists (Nicole: “Um, yea, so I smoked some pot, and then took a little blue pill, and I really had to drive because I absolutely had the munchies, but I can’t actually eat anything cuz I already had my tic-tac today, so I thought maybe I’d just go stare at the Hollywood sign and think about how it looks like it could be made of Twizzlers.” *** Me: “Omigod, I totally just slapped that Texan housewife when she told me I should wear more gold. How can we spin this to The Duluth Tribune?”).
But what if my publicist is out for cocktails at PURE with Pamela Anderson and Jamie Foxx and doesn’t pick up? What to do then?
Well, I could assuage my fears by attending a calming yoga class, right? I mean, through controlling my breathing and working through a series of sustained poses, I could cleanse my chakras and free myself from the willies engendered by women who wear too much make-up; I could re-center; and I could get back to what’s important (like how the Hollywood sign looks like it could be made out of Twizzlers).
So one day, after a run-in with a headless Barbie (that’ll teach me to vacuum under the beds), I was forced into an emergency visit to yoga class–all I needed was that reliable, gentle atmosphere and a few warrior poses, and the mantra of “no head, no head, Skipper had no head, no head, no head, but she had on excellent pumps, but no head, no head, no head” would be banished from my brain.
Upon entering the room, I noticed the teacher had not yet arrived, so I spent a little time sniggering at a couple of the other class attendees (not so very yogic of me, I concede), especially the woman in full make-up, sporting a sternum full of jewelry and one of those off-putting coordinated gym outfits. What the pajeebus is up with women like this? Naturally, I assumed she was a Texas housewife, visiting the city to see how we do our downward dogs north of Ye Olde Mason-Dixon line.
Suddenly, however, this woman reoriented her mat and welcomed us all to class. Wait a Mary Kay minute, but she was the teacher! After a few words to greet newcomers and a couple tips on how to use a flatiron for best effect when straightening hair, Mary Kay Yogi started class.
What ensued made me long for more quiet, quality time with Headless Skipper; at least she and I could stay focused on each other for more than ten seconds at at time. Mary Kay Yogi, though, moved through each pose in rapid time–we barely held “Free Pink Sedan” pose for a nanosecond– keeping us moving at a staccato pace for an hour while we held each pose “for five breaths” (if those breaths were coming out the mouth of a mouse in Mile 18 of a marathon). I would no sooner hit a pose than she’d dismiss it, calling, “Okay, let’s shake it out.”
I don’t know much, but I know this much is true: in yoga class, the words “let’s shake it out” are antithetical to everything that the holding and breathing and shaking and sweating are supposed to be about. No, no, no “let’s shake it out.”
Normally, I leave a yoga class feeling refreshed and cleaned out, ready to face the Red Hatters of the world, but that day, after my mandatory post-class makeover, during which I learned the proper application of false eyelashes, I felt, well,
Texan.
Go, um, Spurs?
(shout out to Rocco)